Baltrasna House, located near Dublin, represents Ryan Kennihan’s reflections on approaches to typological recovery and new construction - specifically, on how to integrate the ruins of what was originally a 19th-century farm cottage with a new structure for residential use, creating “a conversation between buildings through time”. 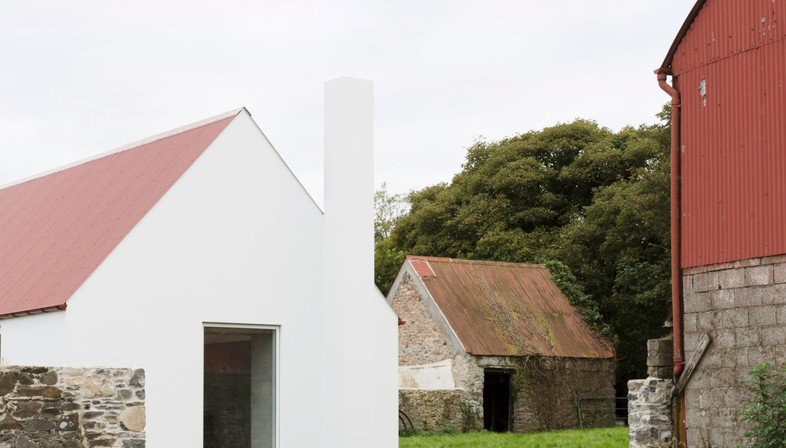 At the behest of an American family wishing to return to their roots by moving to Ireland, Ryan W. Kennihan Architects was commissioned to renovate a cottage in the countryside on the coast to the east of Dublin. These areas are known for their small-scale agriculture, which goes hand in hand with the presence of farmhouses: complexes of buildings with pitched roofs arranged around one or more courtyards. As historically, cottages were always a home for the same family, which brought new needs with it as it grew, they have always undergone constant transformation. Architecturally speaking, new spaces were the result of an accumulation of uses and functions. Widely recognised as the most representative type of building in the area, farms are the heart of the local people’s lives and symbolic of their vernacular culture. In the coastal area to the north-east of Dublin, many cottages are still very much used as homes, although some are dilapidated and are slowly disappearing, absorbed into the suburbs between large residential neighbourhoods and commercial complexes.
From his very first visit to the cottage, which has been in the clients’ family since the 19th century, Ryan Kennihan said that he felt the profound presence of human memory within its walls: “Without resorting to Ruskinian dogma, we might still acknowledge that much of the value of ancient buildings lies not just in their historic evidence of past cultures and technologies, but more in the felt presence of the lives that have been lived within them and the reflections of the human condition that we see in their slow decay.”
When it comes to private projects, the approach to restoration geared towards re-establishing the functions of use of any historic building generally focuses on the cladding and coverings involved in an effort to bring it up to current insulation standards. However, this entails the creation of entirely new spaces, where there are only traces of the past to be seen or, conversely, where it is showcased with excessive violence, like a trophy to be displayed; in any case, it is hardly ever brought into the present seamlessly. It is, unfortunately, exceedingly rare for the emotional bond with the stories and uses that came before our time to be properly preserved. Instead, a simulacrum comes to replace the authentic spirit.
In Baltrasna House, however, Ryan Kennihan’s firm had the opportunity to reflect carefully on these principles, in part thanks to sensitive clients who allowed themselves to be guided towards more unconventional choices.
Faced with a ruin, as in this case, the approach most commonly taken is to raze it to the ground and reconstruct its profile, making for an imitation completely devoid of meaning. However, in light of the brief, on this occasion the architects were prompted to consider the possibility of undertaking an extreme conservation, largely by integrating the ruin with a new architecture. Precisely as the farmers had always done throughout history, simply accumulating functional volumes and transforming their uses. Authenticity, then, as “an embrace of the existing ruin and the creation of a new structure whose organization, form and material resonate across many characteristics of the local building culture.” 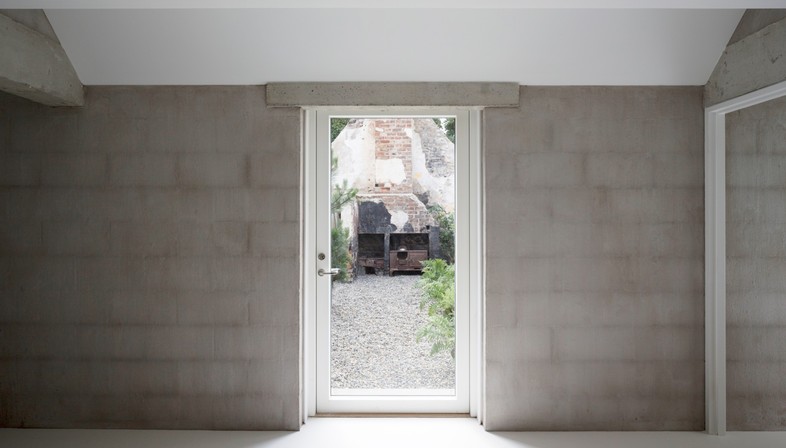 The long evolutionary process of this farmhouse had seen several additions made to the central cottage, namely a barn, a chicken coop and a more recently-manufactured equipment shed, as noticeable from its distinctive hangar roof. A spontaneous architecture, with walls built of local stone, forming two grassy courtyards sheltered from the strong coastal winds. The ravages of time had worn away at surfaces and objects alike here, such as the shutters and animal hooks in the barn, whilst the collapse of the roofs had exposed the rooms and their old, abandoned objects to the rain.
Ryan Kennihan’s design for the site saw the construction of a new volume primarily intended as a living space, following the lines dictated by the typological language, grafting it transversally to the dilapidated central body. Built on a single storey, with living and sleeping areas joined by a straight line, the new building has masonry in exposed concrete blocks with a mortar wash, combined with glass doors that allow for maximum visual communication between the interior, the garden and the old buildings. The simple pitched roof made of corrugated sheet metal visible from outside conceals a variety of ‘tent-style’ ceilings within, lending each room a different and changeable light.
The old buildings, meanwhile, were cleared of their debris, laying bare all the construction materials used in them in a visual timeline of sorts. These have not been forced into new uses, but instead simply juxtaposed as places for memory and contemplation. The old walls, now without a roof, have become visual boundaries and serve to represent moments throughout the course of the family’s life, with the new house now also becoming an integral part.
In a rather evocative definition, Ryan Kennihan referred to this project as a “conversation between buildings through time”, a home that is at once old and new, specific and universal, familiar and yet mysterious.

Winner of the Best House in the RIAI Awards 2021

Winner of a Special RIAI Award for Research in Practice 2021 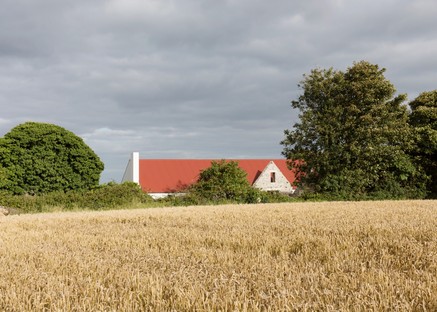 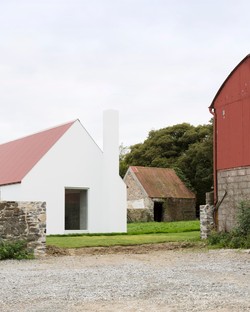 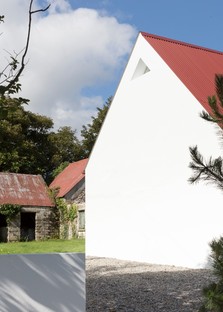 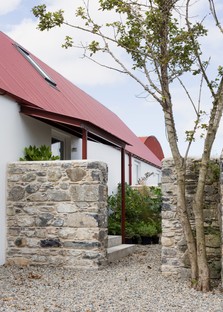 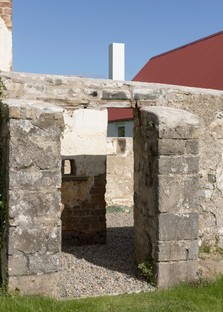 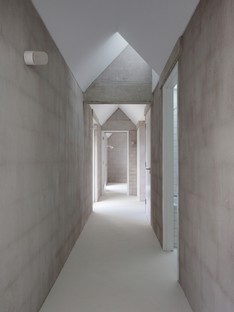 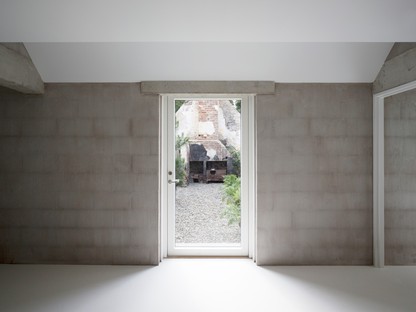 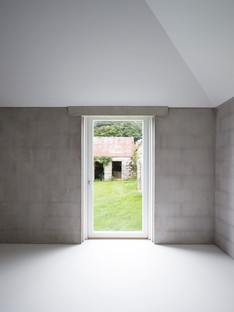 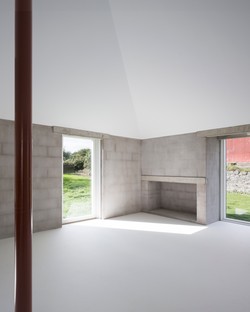 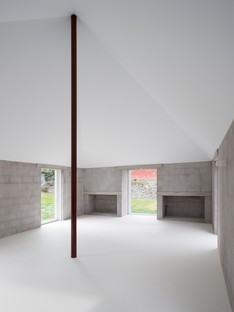 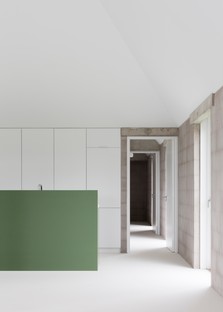 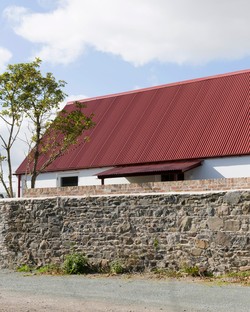 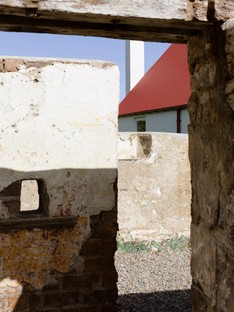 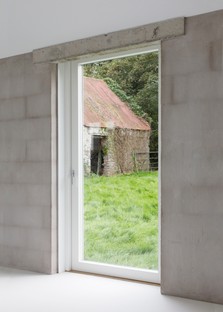 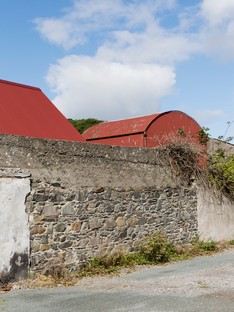 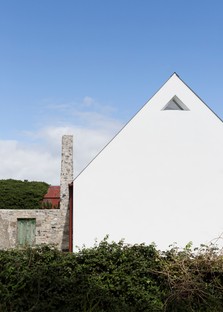 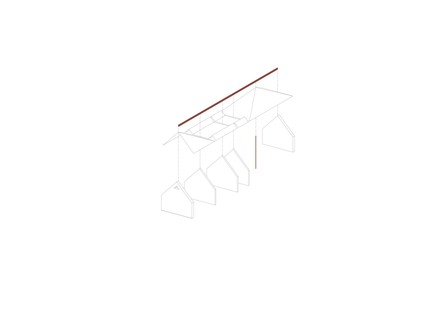 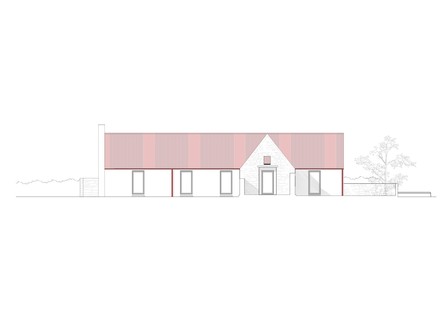 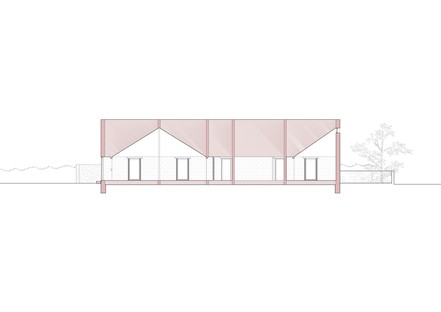 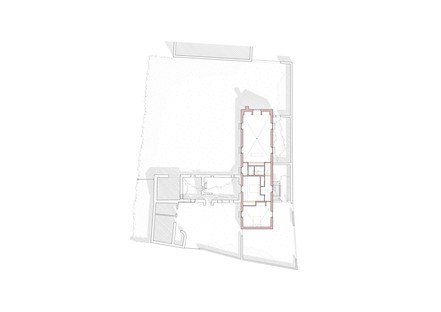 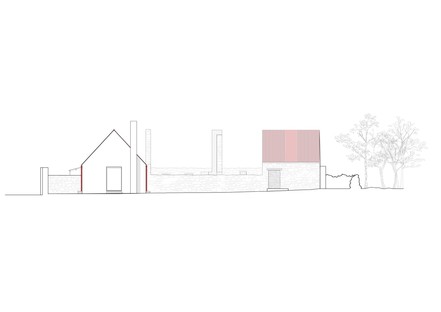 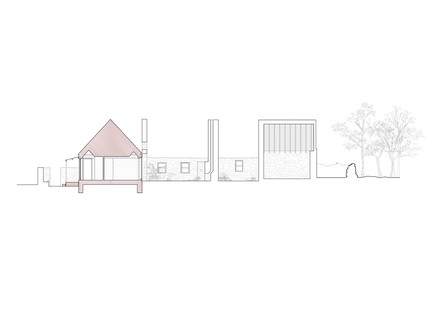 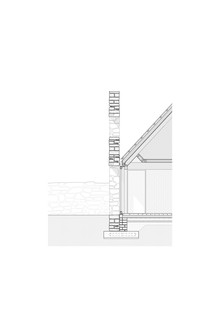 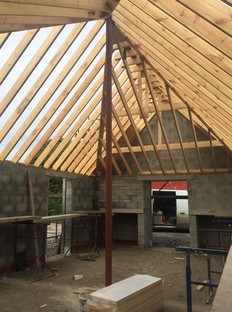