By 2027 Chongqing, China will have a new cruise centre featuring the futuristic Yangtze River Skywalk designed by architect Ma Yansong and his studio MAD to welcome tourists from the adjacent cruise terminal on the Yangtze River. MAD Architects, in collaboration with the China Academy of Building Research (CASR), have won the international competition for the design of the Cuntan International Cruise Centre in Chongqing. 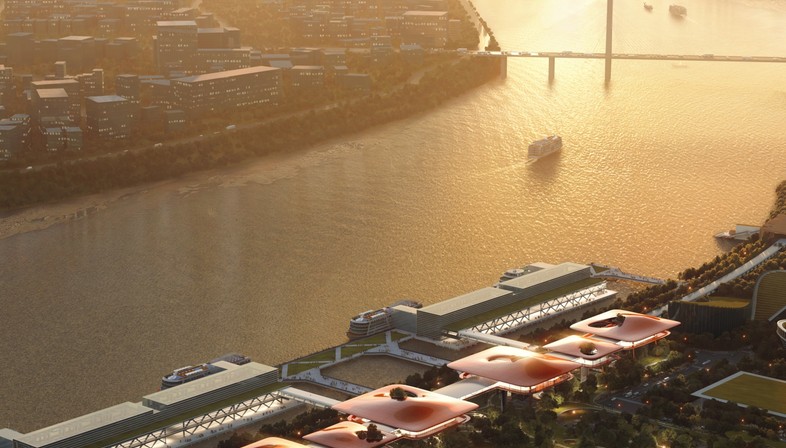 The Gantry Crane project by MAD Architects, under the leadership of architect Ma Yansong, produced in collaboration with the China Academy of Building Research (CASR), is the winner of the international competition to design the Cuntan International Cruise Centre in Chongqing, China.
The new cruise centre and the associated terminal will be built in the Cuntan Port area, allowing access to the Yangtze River. The complex will serve the city with a cruise harbour, related services and commercial space. The project site is a 66,000 square metre area currently used as a freight terminal, which provided the architects with an important source of inspiration.

Ma Yansong explains that the presence of the Yangtze River in the city of Chongqing is not just a part of the "natural landscape": the city’s relationship with the river is strongly mediated by human activity. Intense river freight traffic makes this city squeezed between the mountains a place full of energy and movement, and it aspires to become the world’s preeminent river cruise port. This inspired the architects to come up with a project that preserves traces of the area’s industrial history while at the same time stimulating travellers’ imagination with futuristic public spaces.

The architects view the big orange gantry cranes that tower over the freight terminal as symbols of the area’s industrial past.  Ma Yansong described them as "alien living creatures that gave a sense of surrealism", seeking to preserve this surreal dimension in his design.
MAD Architects’ Yangtze River Skywalk will be a 430-metre-long complex of six raised and interconnected buildings inspired by the port’s famous gantry cranes. Ma Yansong describes it as a futuristic free-walking city that has seemingly arrived here from elsewhere and could perfectly well get up and go somewhere else in the future.
The raised position of the buildings and the strip façades of aluminium and glass give the complex a light appearance, opening up vast panoramic views over the river and its surroundings for visiting tourists. The six buildings alternate symmetrically with restaurants at the ends of the blocks, followed by commercial spaces, with urban halls in the middle. The differences in height and size of the six volumes recall the rhythm of the cranes in the freight terminal, also clearly reflected in the use of the colour orange.
MAD Architects’ project involved not only design of the raised complex but of the urban park below it, Cruise Ship Landscape Park, and the Cruise Ship Hall. The architects will connect the park with the adjacent Pier Park and Century Cuntan Park to create a single 100,000-square-metre urban green space and landscape.
Work is due to begin in the autumn of 2022, and construction of the new Cuntan International Cruise Centre will be completed by the year 2027.

All images and video courtesy of MAD Architects 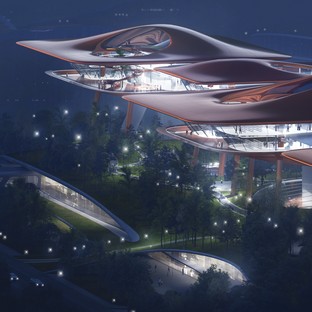 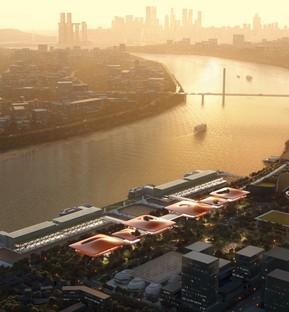 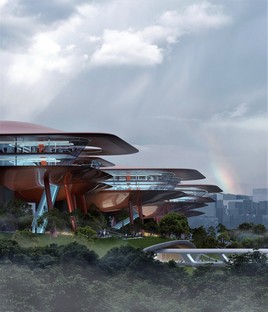 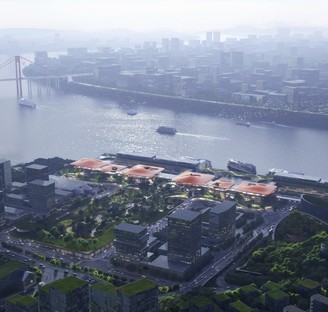 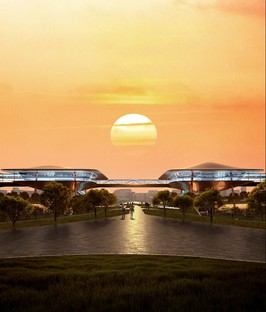 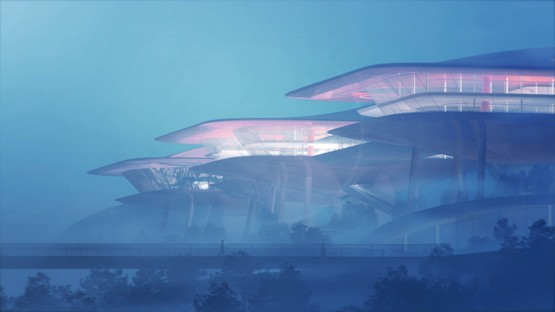 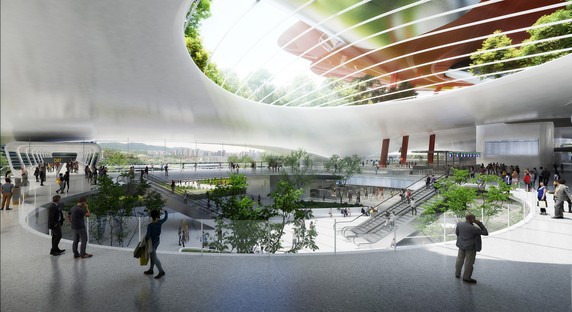 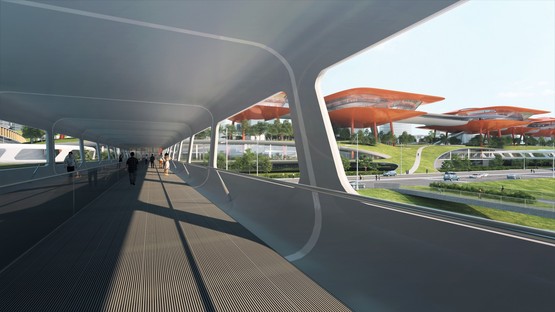 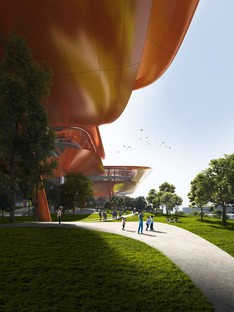 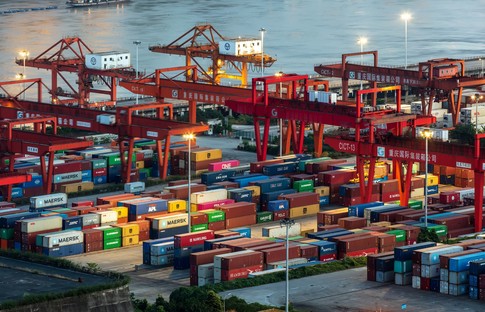 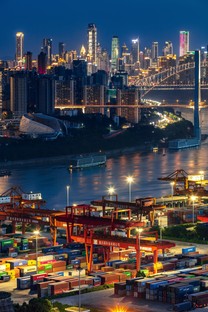 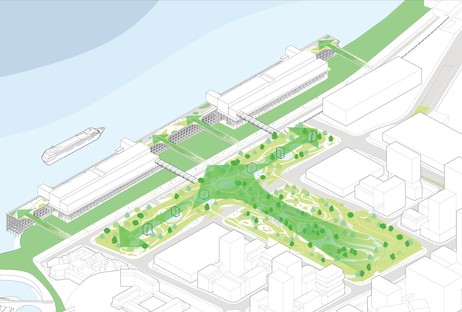 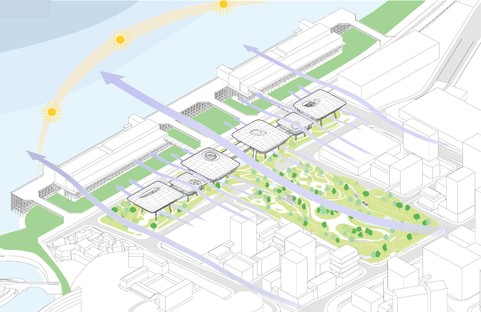 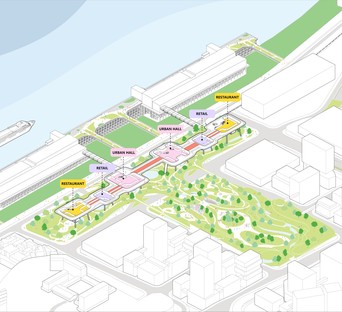 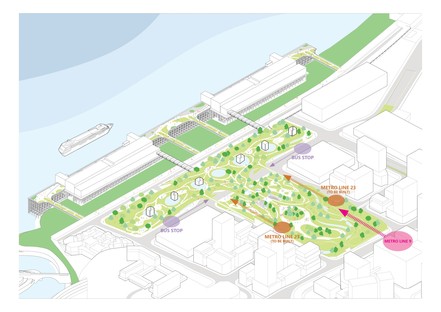 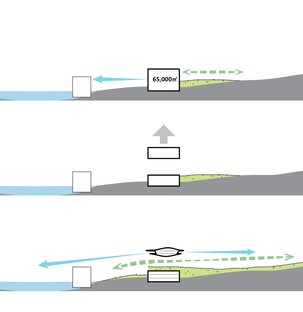 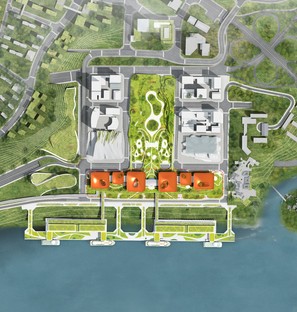 MVRDV designs the NIO House showroom, taking inspiration from the city of Chongqing