Reclaiming an old technical building that once housed a transformer in order to create a temporary refuge for hikers. This is the project that a carpenter in Wirdum, the Netherlands, commissioned Dutch firm Lautenbag Architectuur to design, with the final product highlighting some unexpected details of the décor. 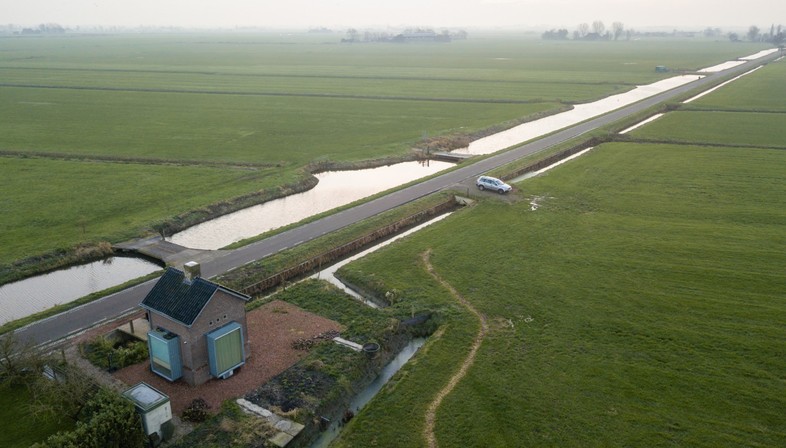 In Wirdum, a small village in the province of Friesland, the Netherlands, a tiny building originally created to house a voltage transformer which had long since gone unused has been given a new lease of life, thanks to a repurposing that makes it more suitable for the current needs of the area.
The village of Wirdum is located in a large, very flat area, permeated by canals and overlooking the North Sea. It is home to just over a thousand inhabitants who populate a centre made up of low, detached houses built around a cathedral. On the southern edge of the residential area, a small, brickwork technical building dating back to the 1920s was all that remained of a voltage transformer that had served the municipality and the surrounding areas up until thirty years ago.
When he came into possession of the land and the little hut itself, Ronald van der Zwaag - a carpenter and furniture restorer with a workshop in Leeuwarden, north of Wirdum - decided not to get rid of the building, but instead to preserve and improve it, as it represented a delicate example of industrial archaeology. Indeed, it was a typical technical construction made from dark yellow bricks, featuring a simple square floor plan, topped with a tiled pitched roof with a chimney for venting gases. Despite being a technical micro-building, it was not without its decorative elements, however understated. A small concrete bridge connected it to the Tsjaerderdyk, the main road running southwards out of the village, over one of the many irrigation canals. It had no other openings except for the main front door.
Ronald van der Zwaag’s plan was to transform the building into a temporary refuge for backpackers and hikers, taking advantage of the widespread presence of tourists, who tend to enjoy exploring the area by bike.
The available interior space of just 20 square metres (approx.) would not have allowed the client to create any sort of welcoming structure himself, and as such, he decided to call upon Lautenbag Architectuur to create an extension that would be both functional and respectful of the building’s history.
The crucial first step was to introduce the light that the space so desperately needed, as well as creating adequate room for even basic accommodation. As such, the decision was made to create openings in three of the four walls, leaving the fourth (with the front door) intact and adding an oriel window on each side, thus creating not rooms, per se, but rather functional areas: the kitchenette faces north, a sofa marks out the lounge area to the south, and the bathroom faces west. This practice is fairly common in northern European countries, and also often seen in the urban landscape of Wirdum, where the homes feature large windows which create a dialogue between indoors and outdoors. In a way, the intention with this minimalistic cabin was to invert the spaces, projecting the landscape into it whilst also expanding the rooms outwards.
The original central space has been left relatively unencumbered, with only a dining table occupying it. Meanwhile, the roof has been rebuilt using new tiles imitating the original ones; the ceiling has been removed and replaced with a wooden mezzanine level, which sits above the entire living area and is accessible via a lightweight staircase located by the front door.
The oriel windows are made from prefabricated glulam panels and glass doors with high-efficiency double glazing. Their external cladding, made from steel slats, incorporates a rainwater drainage system, but it is also reminiscent of the technical elements of a transformer, maintaining the industrial image that has always characterised this building.
As such, the general structure has remained intact and clearly recognisable, whilst the finer details of its design have been emphasised: the profiled red and grey brick plinth, the design of the chimney, the gable and the cornice of the main doorway.
The interior design sees relatively spartan and humble elements superimposed onto the structure, such as the tiled floor and yellow masonry inner wall, as well as birch-covered single-block furnishing units with storage compartments throughout all parts of the extension. In keeping with this style, the kitchen is equipped with a shelf containing the sink, which bisects the glass frame and provides a view of the nearby houses. The lounge area, meanwhile, consists of just a corner with a sofa and coffee table from which guests can admire the surrounding countryside. With a splash of colour, the bathroom features vibrant orange sanitaryware and a large shower, again with a view. The sliding door offers privacy if there is more than one guest at a time.
The mezzanine floor contains a double bed which enjoys a splendid view from a small window and a skylight placed in the old chimney, allowing a little light in, even at night, as well as providing stargazing opportunities. On the outside, a new red front door evokes a homely feel, and all around the building, a walkable green space marks out a buffer zone between the hut itself and the surrounding fields. 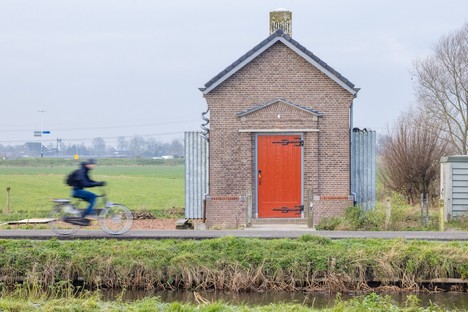 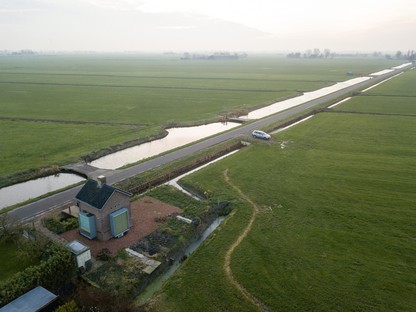 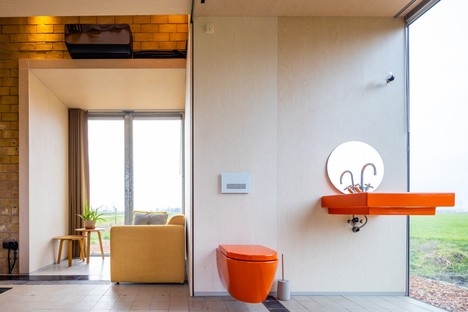 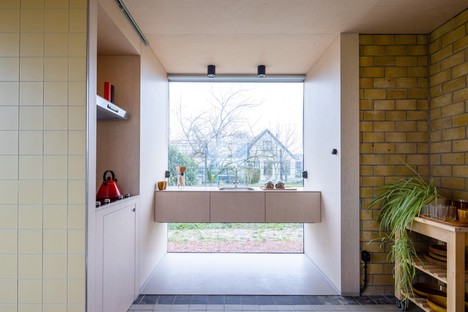 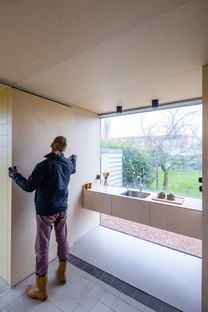 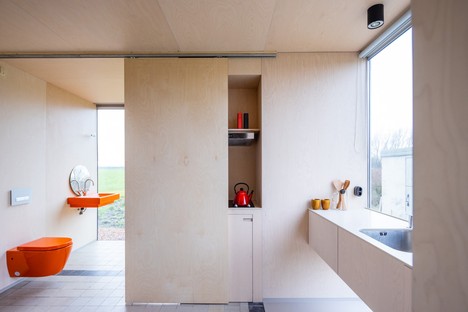 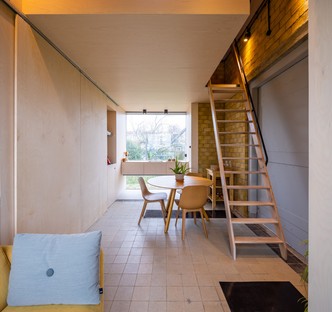 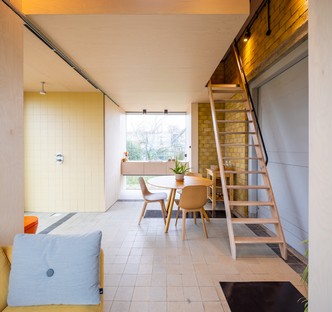 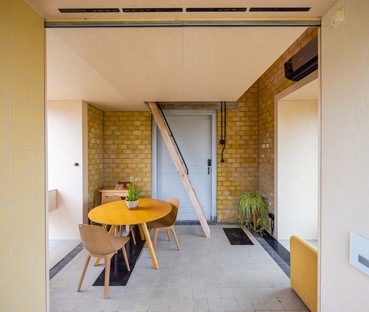 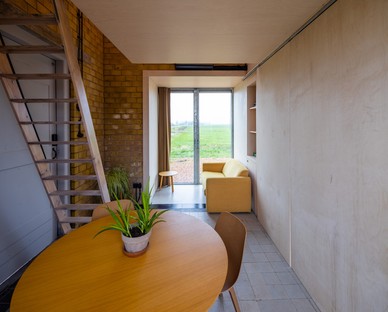 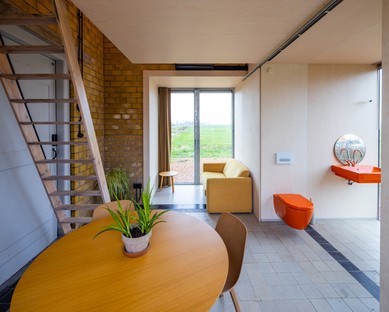 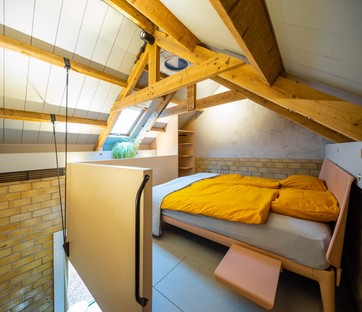 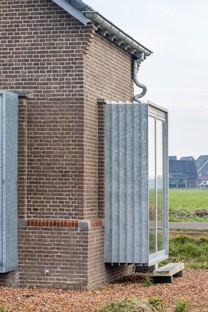 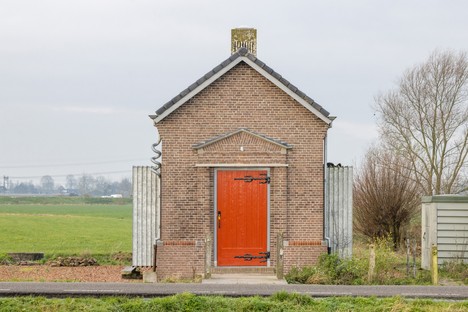 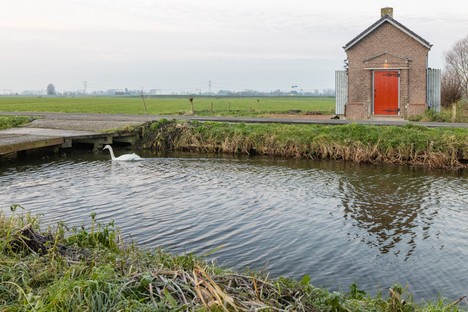 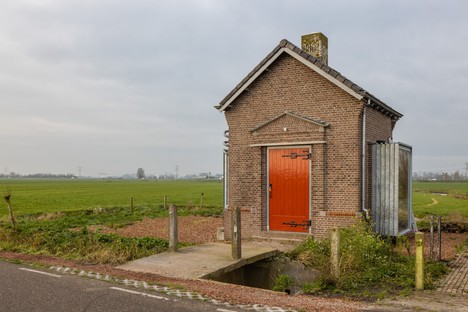 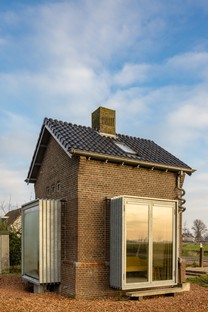 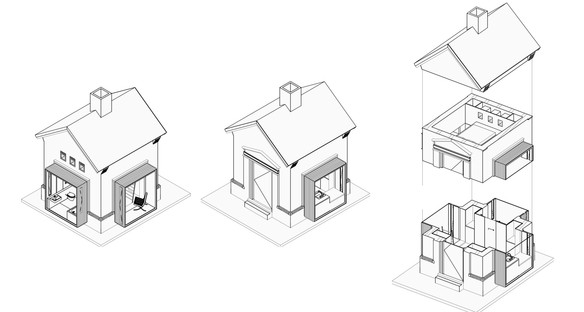 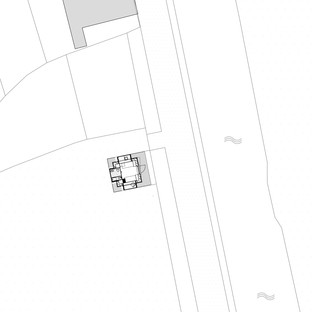 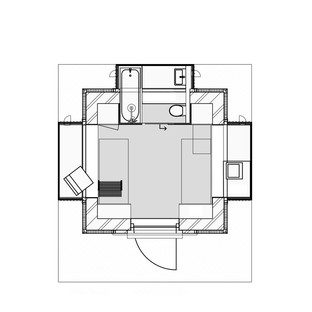 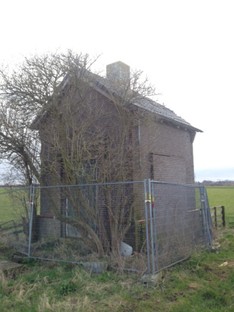 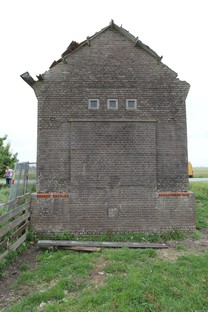 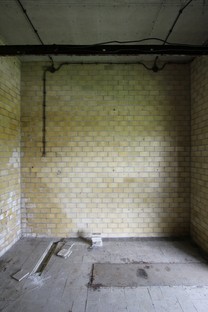