José Adrião Arquitetos renovates a house in Lisbon’s Alcantara district for use as José Adrião’s own house. Squeezed between two buildings on Rua Gilberto Rola, the Casa dos Prazeres opens up towards the top and the rear patio. White walls, bare concrete and glimpses of different rooms and levels give the project its character. 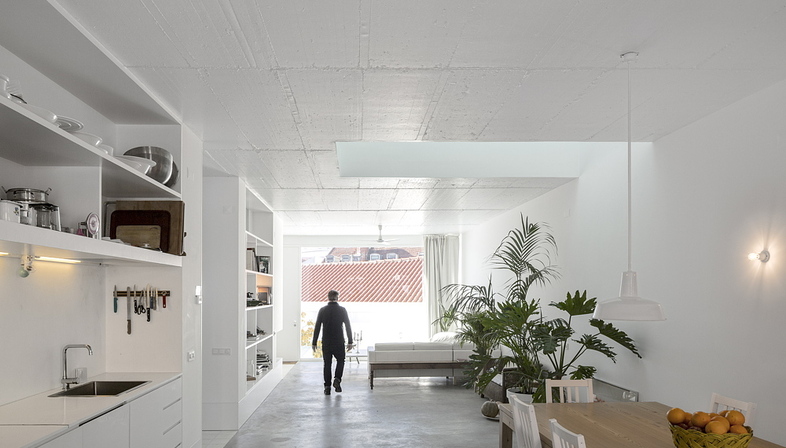 José Adrião Arquitetos’ Casa dos Prazeres stands in Lisbon’s Alcantara district, with its docks on the Tagus River and old houses converted into lofts. In Rua Gilberto Rola, where José Adrião has his studio at number 41, he has renovated a house for his own use, built on three levels with a rooftop patio with views of 25 de Abril Bridge and an underground cellar.
The Casa dos Prazeres is the result of conversion of a home with no particular qualities, as the architect himself notes, other than a symmetrical façade interrupted by windows at regular intervals and crowned with a balustrade. Having restored the “face” of the home, the interiors, which had been abandoned and were at risk of collapsing, were spatially adapted to make the most of an area measuring 7 metres wide by 22 metres long, squeezed by other houses on either side. The depth of the lot allows light to come in from the main façade and the back wall due to the presence of an unbuilt space resulting from calculation of the amount of land that may be developed under building regulations. In addition to this, José Adrião has added a light well in the centre of the space lengthwise, distributing indirect light to all levels.

The choice of white as the only colour for the interior, recalling many constructions of the Porto school, aims to maintain a certain “reserve” of light in dark spaces, as is the case here. This is also the reason for the division of the building into two clearly different areas, one for utility use, circulation and technical facilities, with small rooms, and a shared space which is kept as free as possible, in a single living area with tables and coffee tables, armchairs and sofas, tall plant pots, shelves built into the wall, open floor to ceiling closets and a step between the lunch area and the living room, as the only elements permitting perception of separate functions. The glossy concrete floor gives the horizontal surface a uniform appearance, reinforcing the ideal of unity of the space.

The back wall has a view over the patio and, on the top two floors, the surrounding district of Alcantara, the docks on the Tagus River and, above all, 25 de Abril Bridge on the horizon, crossing Lisbon in memory of the 1974 Carnation Revolution. In contrast with the geometric front façade, it alternates big floor-to-ceiling windows with smaller ones, glass doors with tiny openings for the wind or for allowing people to see out without being seen: perhaps a contemporary evolution of the gratings on Middle Eastern buildings? These are only a prelude to the even smaller windows the architect had fun adding here and there on the inner walls of the light well, and the niches cut out here and there in the walls of the rooms, sometimes simply to place objects in and at other times to let light through. Or indiscrete views such as the glimpse of the inside staircase from the shower. 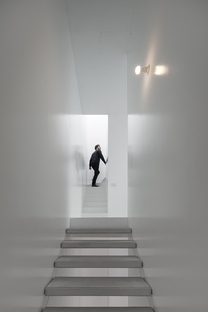 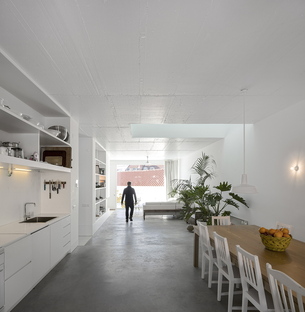 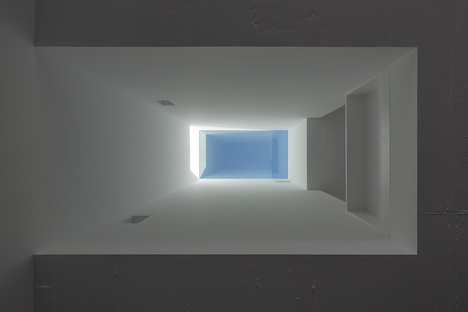 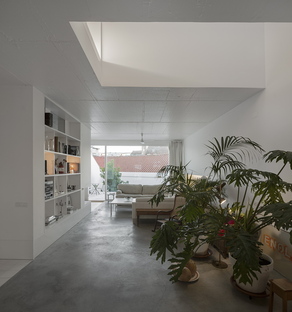 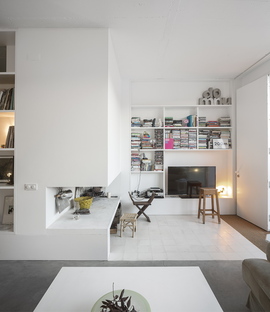 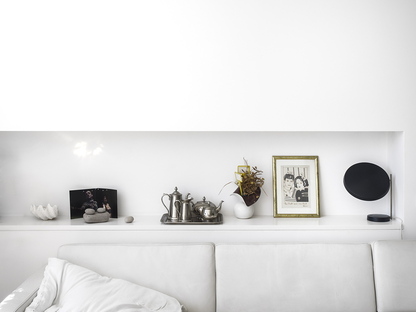 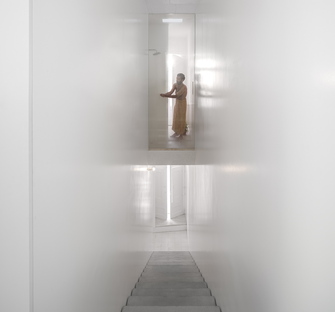 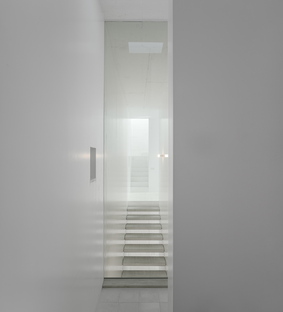 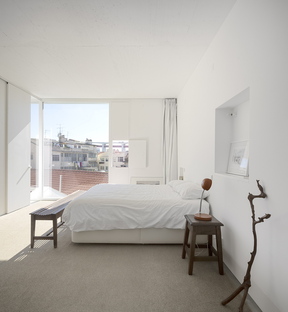 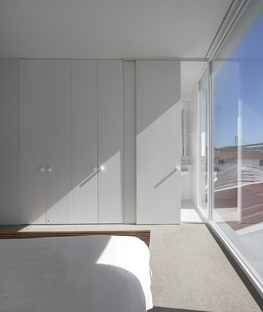 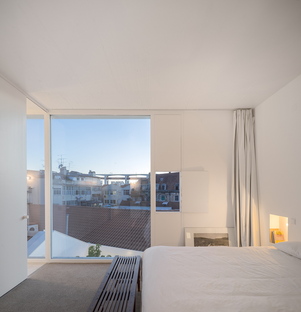 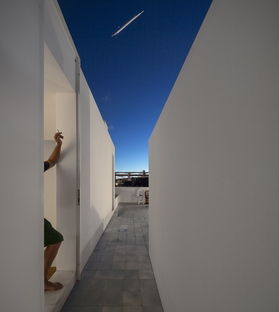 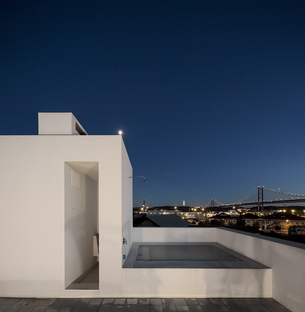 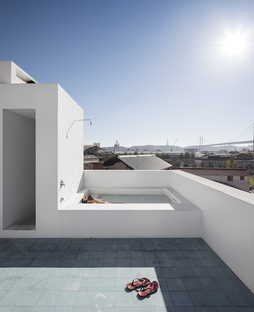 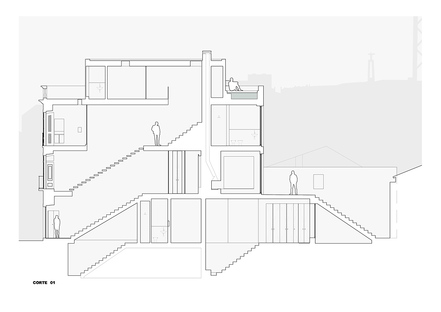 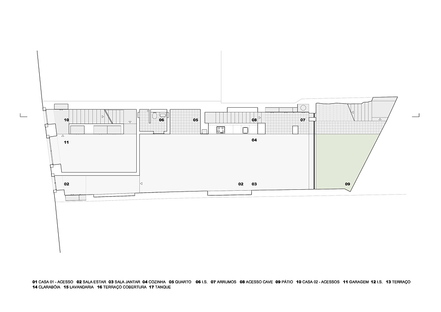 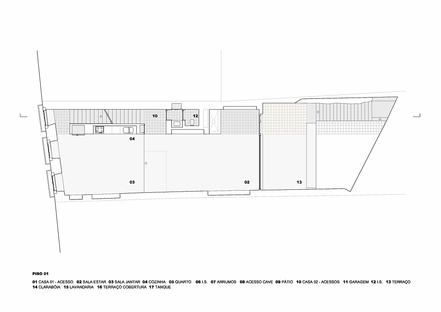 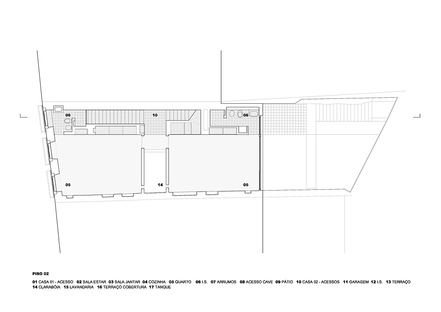 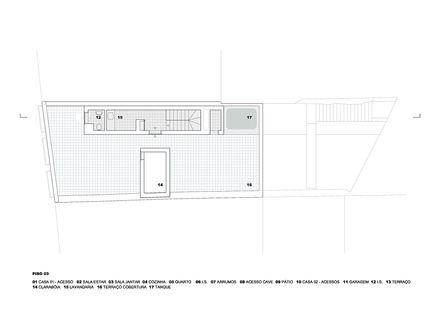 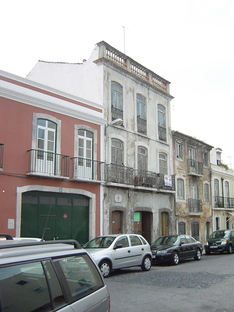 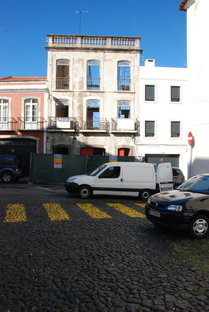 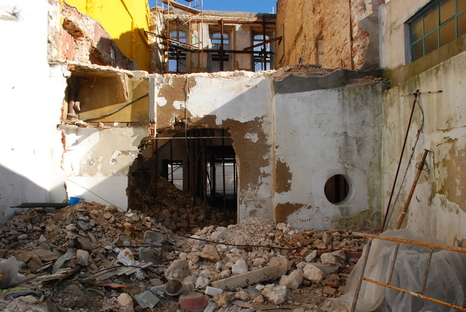 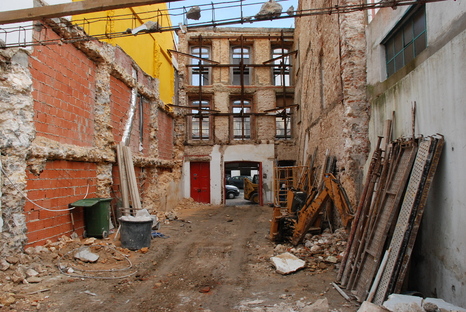