Gaming and design come together in the recent project created by Fabio Novembre for WSC (Web Stars Channel): two new custom gaming rooms for influencers Favj and Pow3r, the two most iconic faces of Italian gaming. Two flats with a high technological potential, which allow the influencers to easily connect with their communities of followers. 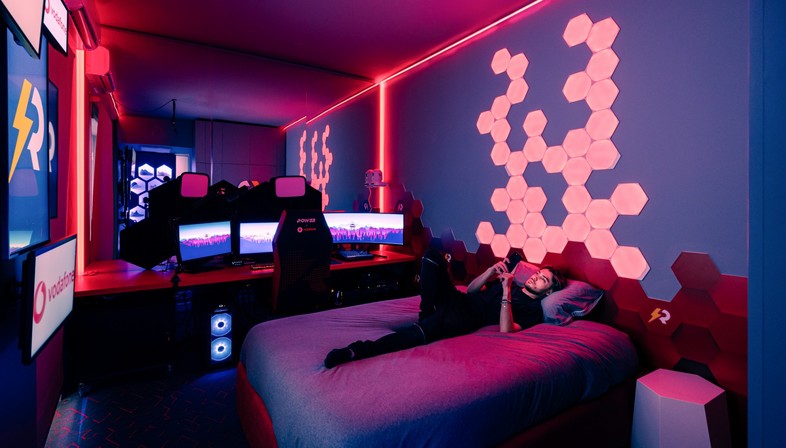 Favj and Pow3r are two influential Italian gamers, two iconic faces of the web with millions of followers. For them, architect Fabio Novembre has designed two new high-tech gaming rooms.
ldquo;As a designer, my duty is to tell the story of the time we live in, and our contemporary world is a mix of the physical and the digital.” explained Fabio Novembre adding: “These guys are established professionals who turn that mix into a show. I have always designed spaces that bring people together, and in these two flats more people arrive at the same time than in a football stadium!”
The WSC creative agency, promoter of the initiative, has a first project underway dedicated to this close interaction between digital and physical reality: it is the digital company behind Defhouse, a "content house" created and inhabited by young influencers. For this new project, on the other hand, Luca Casadei, CEO of WSC explained that to best express this level of connection between the digital and physical realms, two true icons of the web were selected, two young gamers who are extremely popular with their respective audience.

The two projects created by Fabio Novembre differ from one another, in order to express the unique personalities and interests of Favj and Pow3r, yet sharing common characteristics. Both offer an immersive experience, not only aimed at gaming, as both flats are high-tech spaces. At the same time, they are extremely comfortable places, perfect for more intimate and relaxing moments. The ideal alcove for gamers: spaces characterised by a refined design that evoke dark punk atmospheres, where high-end technology is evident and becomes an undeniable element of the design itself, emphasised by strong colours, contrasts, lights and designer furnishings. Moreover, Vodafone’s presence within these spaces, an important partner for high-level connections, essential for gaming sessions, is conveyed through the use of the iconic red and the brand’s recognisable logo, transforming every corner of the two flats into a possible set for streaming new content. A capability also made possible thanks to the creation of a “multi-set” that transforms the home environment into a television studio, allowing the two creators to continuously produce live streaming content, even moving from one corner of the room to another, as in a real television studio. 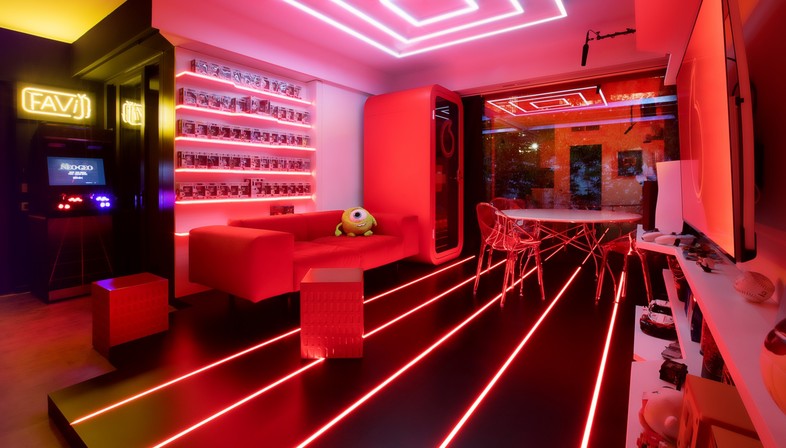 In each flat, the gaming theme is developed in synergy with the personality and point of view of the influencer who lives there. For Favij, described as "a spontaneous and ironic guy, based in Milan, who has fun with gameplay in his videos, but also tells personal stories", together with his passion for Japan, videogames, Harry Potter and Funko Pop, the architect has designed a flat where the common theme of gaming takes on different frames of reference. For example, the flat includes a corner inspired by the 1980s, featuring theme neon lights, graphics and arcade games. The living room, on the other hand, is a space featuring LEDs and contemporary shapes for console gameplay. Finally, the real gaming room is dominated by black and dynamic lights that focus the attention on Favij’s performances. All accompanied by pop objects tied to his interests. 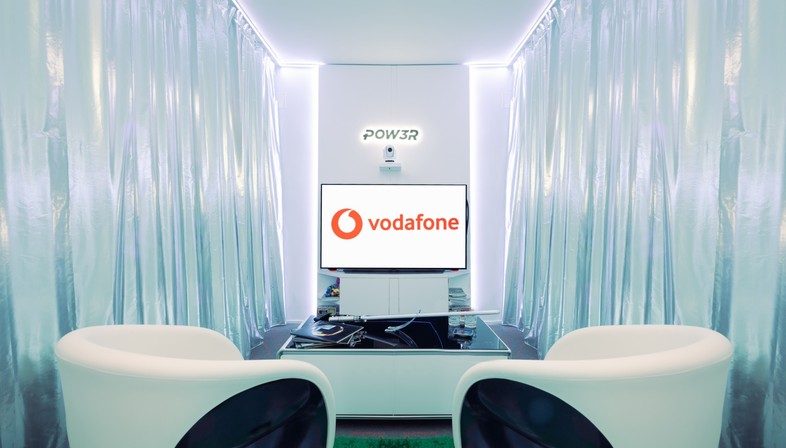 Pow3r, on the other hand, a Twitch pioneer, is described as "an Adidas athlete and a fashion and design enthusiast, a Pro player and member of the FNATIC gaming group", with an unbridled passion for technology and hardware, Star Wars and lightsabers. For this project, Fabio Novembre divided the space into two blocks, one dedicated to gaming, featuring darker colours and contrasting LEDs. The symbol of this space is the hexagon, used as a graphic decor element on the walls, as well as in the shape of the influencer’s back-lit collectible trainer display. The second block, on the other hand, is intended for more relaxed live broadcasts, characterised by the natural light and the silver curtains that form the backdrop for the designer armchairs and the large simulator. 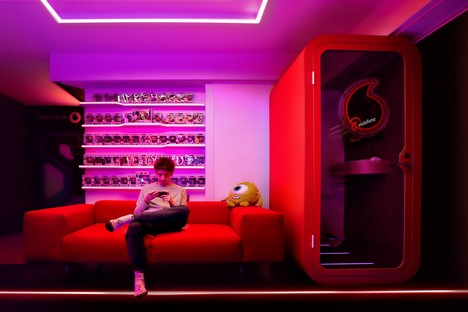 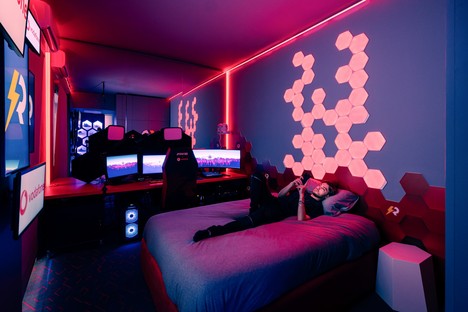 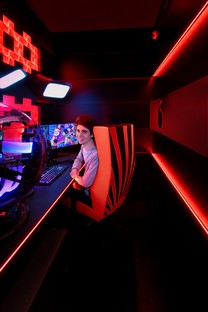 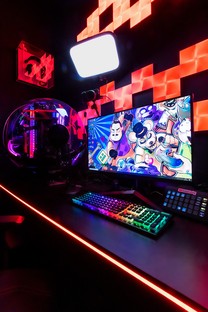 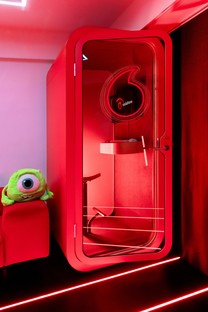 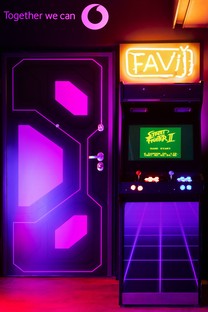 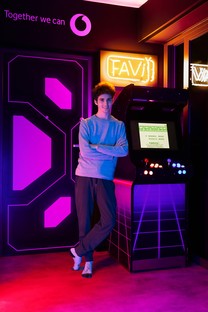 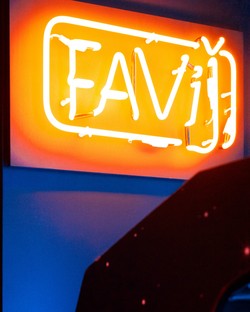 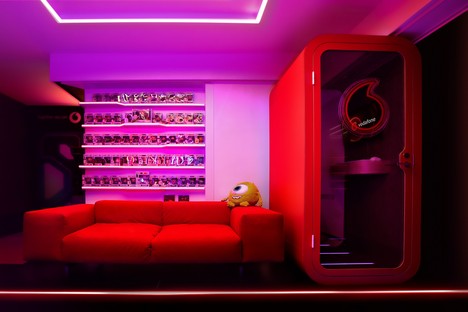 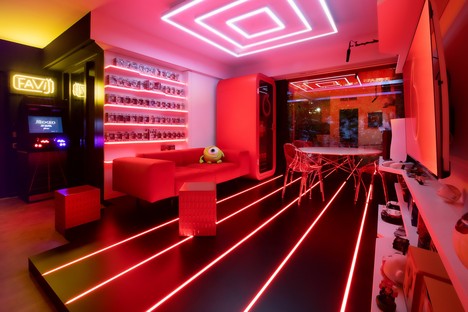 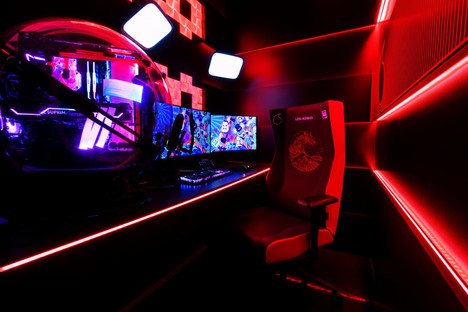 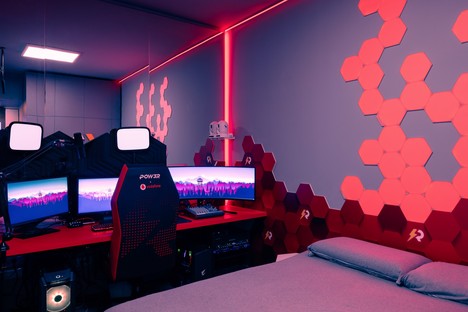 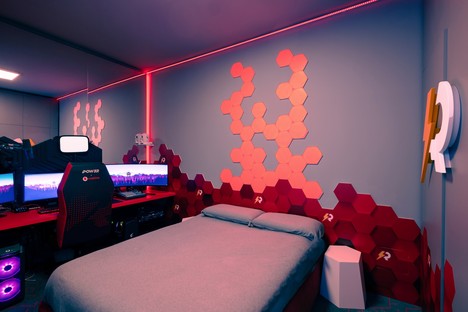 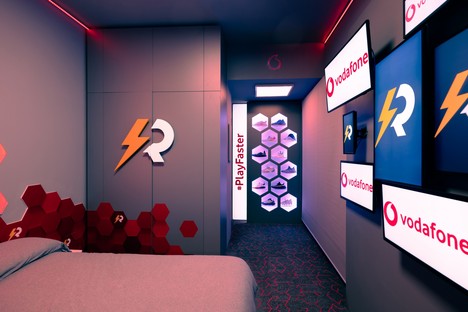 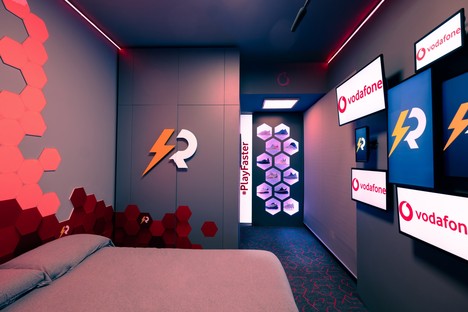 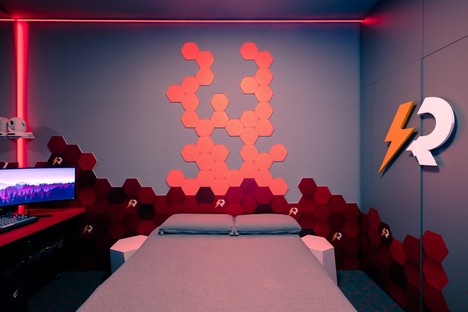 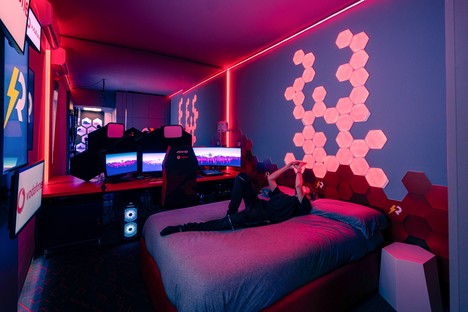 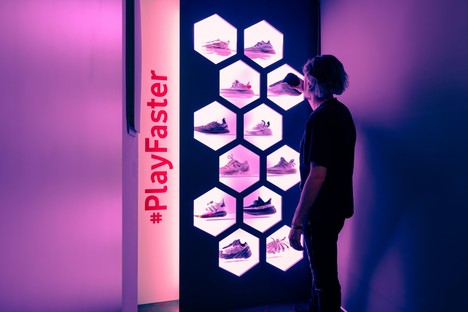 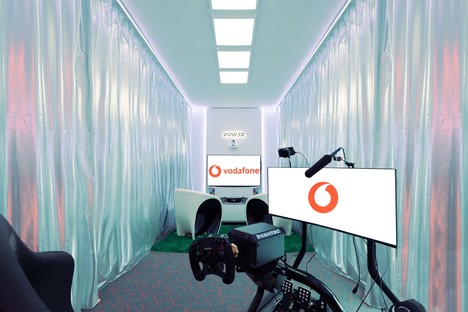 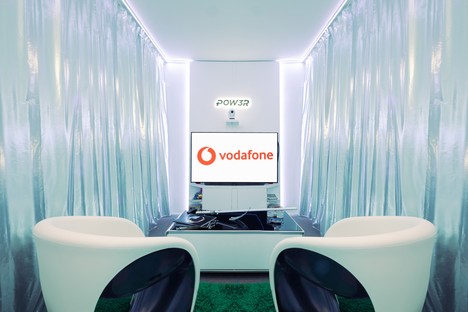