“The design is kept to the simplest expression, the least technical, the least lyrical, in fact an almost primitive structural solution. The bridge is conceived not to be an event in the city but actually a place to promote the events in the city. From an overdose of formal gesticulation, I wanted to propose a robust ‘plateau' that would last and contribute to unify the right and left river banks ”, —Clément Blanchet, CBA 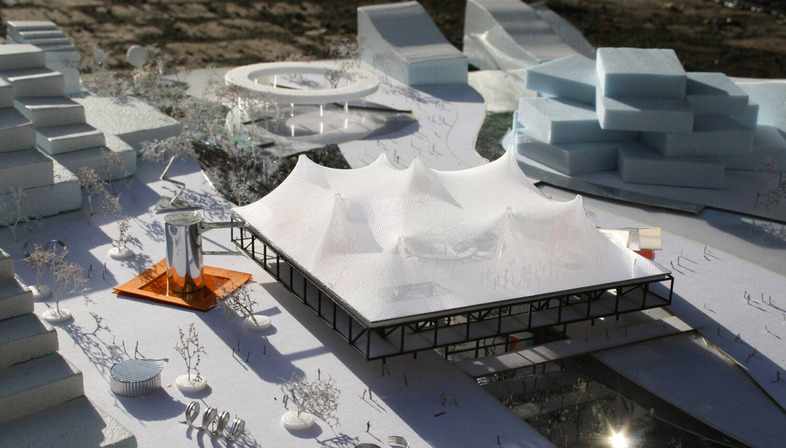 Clément Blanchet is a young architect, who has already had a series of incredibly important experiences for his age. Retracing his life back to the years when he was a student, we discover a unique path which unfolds between universities in diametrically opposite locations, from London to Bangkok, from Chicago to Versailles, where he graduated and immediately started in the profession with an internship at OMA in Rotterdam, which in only two years, saw him become responsible for various projects and competitions. In 2008, he was appointed Associate, and within a short period, Director of OMA France. In 2014 he created his own current company, Clément Blanchet Architecture, CBA, maintaining a collaborative relationship with Rem Koohlaas and, to remind the most recent works, I can mention the Alexis de Tocqueville Library, Caen; the Centrale School of Paris-Saclay, Paris and the Simone Veil bridge, Bordeaux.

His current office is located in a very special corner of Paris, which exudes the charm of the artistic climate that had its heart here in the 1920s, a small street, Villa Seurat, named after the famous post-impressionist painter Georges Seurat, a short walk from the Montparnasse district. The workshop-houses, as defined for the sobriety in lines and concrete facades, without any ornamental decor, designed by the brothers Auguste and Gustave Perret, in complete rupture with the traditional architectural concepts of the time, are now classified as Historical Monuments. Among so many testimonies and memories of a past, which never repeated, due to such an extraordinary concentration of intellectual and creative minds, permanences and passages of international artists, as Henry Miller, who at number 18, hosted by a friend, began writing his 'Tropic of Cancer', living with his lover Anaïs Nin, at n.15, in one of these studios-houses, characterized by a gigantic glass window, which brings natural light over 2 levels of the atelier, many new works are alternating and developing. The young team that animates the soul of CBA, protagonists from different backgrounds, confers a multidisciplinary and multicultural identity to the firm, and supported by great tenacity and determination, is actually collecting a lot of satisfaction. 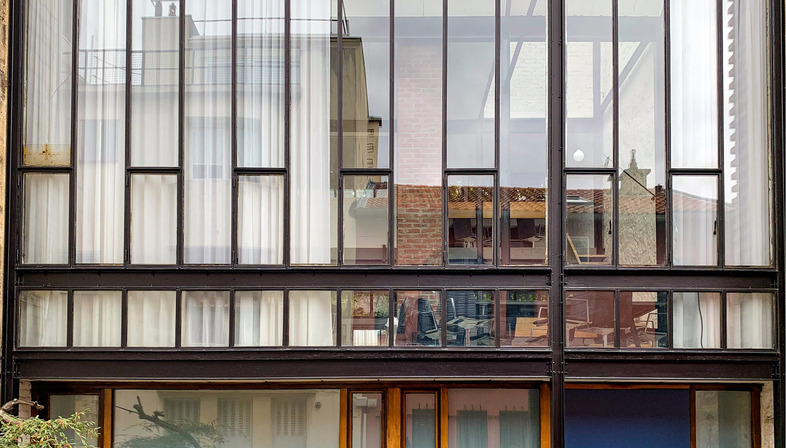 Far from a specialized sectoriality, the laboratory, as it seems appropriate to be defined, does not like to be framed into a specific, precise competence but intends to embrace a perspective of global knowledge based on multiple specific solutions. It also doesn’t accept to align with the evaluation of projects according to their scale, instead considers each design process an episode that cannot be quantified by time. This year, similarly as it had already happened previously, they achieved, participating in competitions, 3 consecutive victories, one month after another. The achievements will be developed from France to Europe, to China, where, selected as one of the three finalists, they are about to face a new, very challenging adventure. It is the consultancy for the urban masterplan of Xichong Bay, a protected environment zone, highly exposed to natural hazards, in the proximity of Shenzhen. With, Clément we are friends, and one of his distinguishing prerogatives I prefer is the simplicity, combined with extreme clarity and elegance, with which he involves his interlocutor, without recurring to certain annoying rhetoric, frequently used by colleagues. He admits that architecture is an opinion but, when he talks about contemporary architecture, he is absolutely convinced that it does not consist in strange, crazy forms conceived to arouse amazement, and gratify the creative act, but rather, in being fruit of a serious, profound reflection, not only focused on the geographical, environmental, economic, social context but aiming to find an interaction between the new presence and the user. In his proposals we can clearly read his aspiration, renewed and re-proposed with absolute coherence and consistency: the new grafts highlight the concern to respond to needs or challenges of the residents, to confer or strengthen the identity of a public space.

Circus ³, cultural center in a suburb of Paris, so called for the main 3 purposes that determine it: “free the ground and let the landscape grow”, “raise an horizontal scenographic and flexible platform framing the main room”, “display the roof as a metaphor of the circus, a place for all activities” condenses in these points past, present and future which, taken together, represent the concept of architecture, the research that marks the entire design of CBA. We can see a recurring trend using the intervention as an opportunity to involve the whole surrounding area. The site, in its external extension, becomes a sort of completion and the energy that spreads from the proposal of the moment reaches everyone, contaminating and sometimes making actors of a more informal show, part of a daily scene. The circus, in this case, as a synthesis of great entertainment and participation, becomes an opportunity to enliven and intensify an area that is transformed into a catalyst for intense collective life. In its role as an archetype, which for generations has nourished the imagination of adults and especially children as a symbol of an imaginative reality, it proposes through a compendium of aspects of the past and present, a type of events and programs that are more contemporary and technological but equally engaging and exciting. It will certainly not provoke what happened to Fellini, who, as some people recount, during the war, at the age of about seven, was so struck by the arrival in Rimini, his hometown, of a small traveling tent that he tried to escape and follow the company of artists, but the new presence will certainly be able to radiate its charismatic strength, energizing a less central neighborhood. The idea turned out to be a winner and was chosen against other important competitors such as Bernard Tschumi & Moreau Kusunoki. The concept of the structural composition is based on very simple elements: the 1500 seats are surmounted by the typical circus tent, a gesture of a welcoming hug, an invitation to have fun in its lightheartedness and prelude to all that is performance in its most exciting form. The entertainment, as the author states, will not be limited to what will be done on the stage but will echo and resonate throughout the surrounding area, transformed into a large plaza. The place itself will become the show, because creating the show means transforming the entire district into a stage.
The tensile structure with its strong allegorical power, evocative of inclusiveness and intense community life, recurs in another project, Carrefour Crafts Research Center, a new complex for the multinational company in Saclay, site that the studio defines the heart of French Silicon Valley. The location, both for its long agricultural tradition, and due to its green expanses, is a fundamental ingredient, sought and emphasized in an active relationship of synergistic exchange between the new farm of knowledge and a pre-existing traditional farm. The next two dimensions, the laboratory and the landscape, merge, seeking a continuity that guarantees the cycle of life: the fields start again to be productive, technological rationality and nature join forces in a partnership of reciprocity that marks the vibrant environment dedicated to the identity of the Group in agriculture. 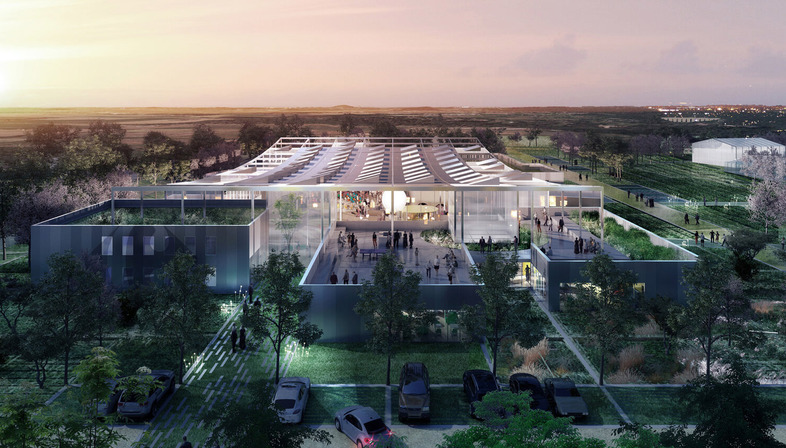 Carrefour Crafts Research Center, Saclay, France. CBA.
A porous structure, extremely exemplified, based on prefabricated modularity, opens the center to nature as to anyone coming from outside. Also internally socialization and exchange are the purpose of the work-reality and of everyday life. An original fragmentation, deconstruction of the dense planned program, consisting of laboratories, executive training and learning poles, allows an organization of this Université des Métiers, UDM, which, without falling into compartmentalization and rigid sectoriality, achieves a fluid functionality and stimulating complementarity. The whole is envisaged as a shared land: a large central area constitutes the heart of social life and is reserved in a strategic point that gives access to an auditorium, to a space intended for exhibitions, to the cafeteria and work area. By promoting communication between the different types of users, entrepreneurs and researchers, the suggested reformulation uses an open plan grid in which the provision of services safeguards the logic of a very appropriate proximity both for research and for dialogue with the public.

Everything is shaped according to an imperative of permeability with opportunities for meeting and confrontation. The extreme adaptability offered by the mobility of the partitions allows an ambience that can change and easily offer infinite configurations depending on the programs. An agglomeration of many different particles which together constitute a single entity, a single organism, capable of giving and receiving but also of transforming itself in a chameleonic way. A proposal that speaks a language appropriate to the narrative of today's architecture, and adapts to the speed of a constantly evolving technological world. As in Circus ³, once again the architectural gesture becomes a means to amplify, to make resonate the character of a context. This set of activities, which Clément defines Carrefour galaxy, sees a project-based idea that, going beyond the formal design, intends to energize a site, understood more than in its complementarity as an integral part of the work, and above all as an area pulsating life. 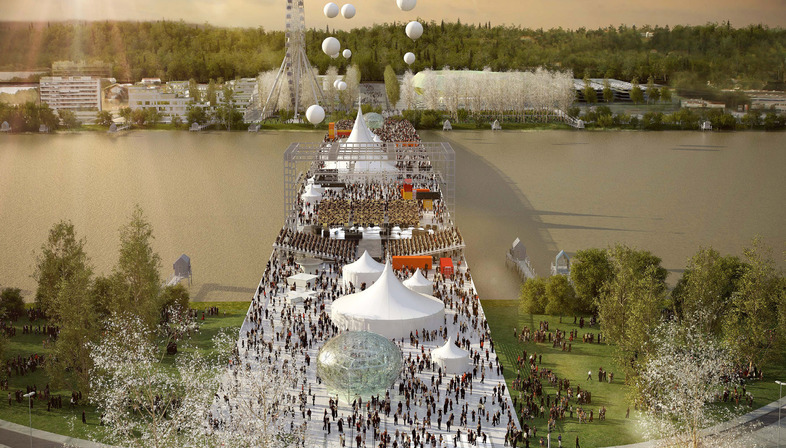 His idea of ​​an architecture far from self-referential statements is expressed in the research of the external structure of the works which, without renouncing to be really pleasant, communicate with the outside, eliminating any barrier and prolonging effects and potential in a real amalgamation of the parties. The building is not the event but the event is the city, one could say and the concept is clearly summarized in the design of the Simone Veil Bridge, realized in collaboration with Rem Koohlaas, where the aesthetic expression and the structural solution were based on a minimal simplicity, the most rigorous possible. The new contribution does not represent an “‘event' in itself but rather a platform that could accommodate all the events of the city". The bridge fulfills its primary function of physical connection but at the same time proves to be an excellent, generous recipient of all public programs. It restores a tradition temporarily interrupted and appears as an incubator of dynamism. 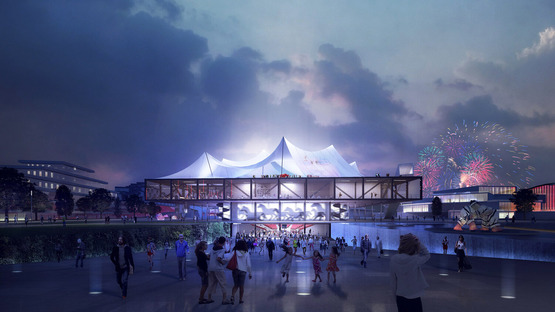 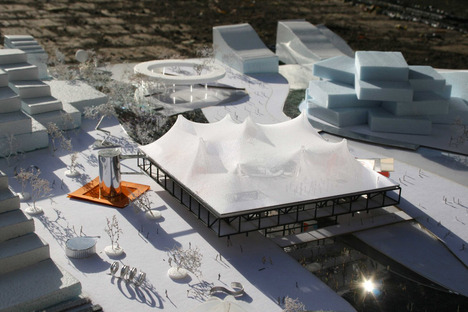 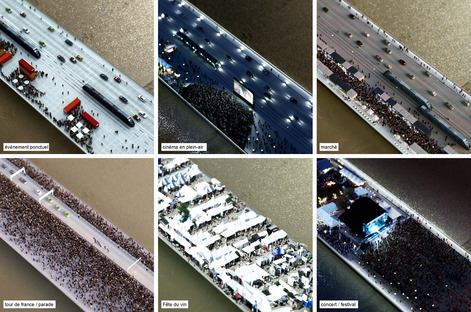 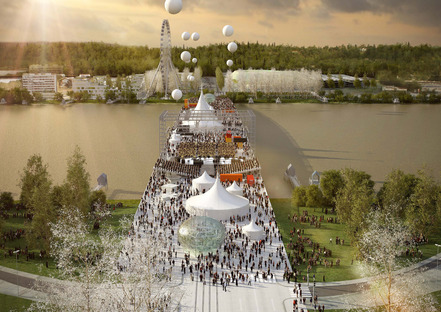 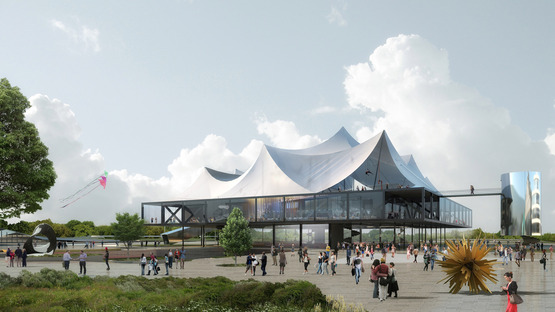 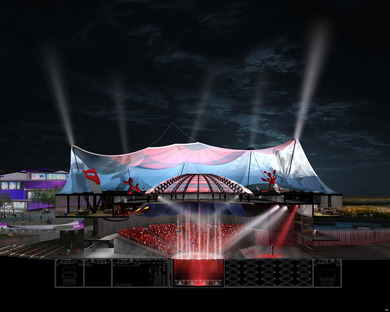 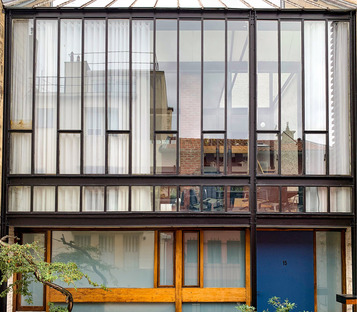 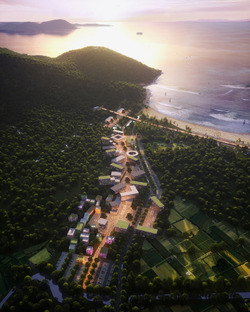 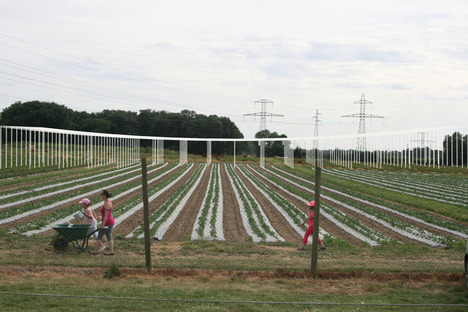 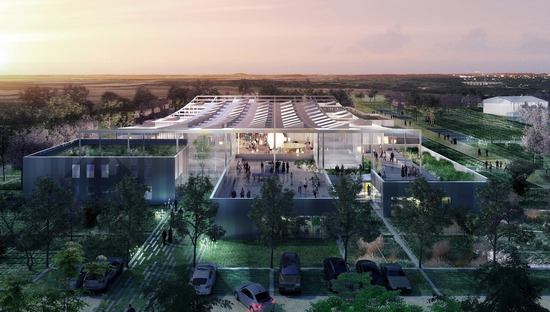