Perhaps never before as in this period the city has been at the center of the unanimity of reflections and re-evaluations, partly caused by the need to find adaptive strategies facing climate change and migratory flows, and partly due to a pandemic that has shaken certainties, questioning life and work’s usual practices. 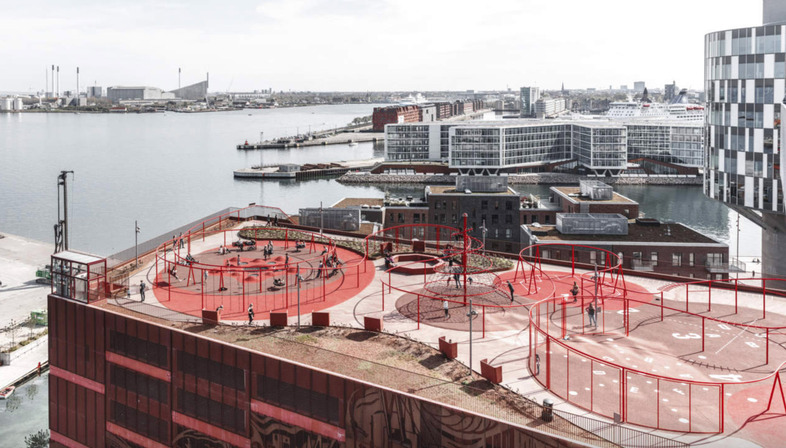 Paused...
Perhaps never before as in this period the city has been at the center of the unanimity of reflections and re-evaluations, partly caused by the need to find adaptive strategies facing climate change and migratory flows, and partly due to a pandemic that has shaken certainties, questioning life and work’s usual practices. The efficient and rational city, determined by the rigid principles of modernism, has revealed many dysfunctions and finding new and more flexible ways is probably one of the greatest urgencies required by the research projected towards a sustainability, intended as capability to adapt and react with less vulnerability to unexpected situations. The long isolation, that we have been forced to confront, has highlighted deficiencies and, above all, shown how much the availability of a collective and inclusive dimension was missed, necessities proven by the many 'unscheduled' areas become settings for unforeseen activities by users. There are many spaces that have seen a spontaneous appropriation, helping within limitations of the restrictions to release pressure or to organize small extemporaneous convivial events.

In the increasingly densified contemporary city, an architecture that knows how to guarantee new forms of typology summarizing and proposing a multiplicity of uses has undeniable advantages, not only for alleviating the excessive compactness of the urban fabric, but also by encouraging greater porosity and permeability towards the community.  Besides helping to contain a progressive and excessive expansion and limit that famous 'soil consumption' at the expense, for example, of small or large green lungs, so vital for the residents’ daily life, many of these new hybrid spaces have the potential to transform into social condensers, reserving public areas and fulfilling a number of requests, from housing and work to recreational and cultural, without taking into account the unplanned, unexpected demands of the city. The hybrid scheme, with its blend of different uses, tends to enhance and revitalize its surrounding context.

There is a group of architects, all very young, particularly interested in creating spaces for people, and equally attentive and passionate in the search of interstices, in-between urban corners, that they love to approach by conferring a vitality they never possessed. Kathrin Gimmel is one of the three partners of this Danish studio, JAJA Architects, that I had recently the pleasure of hosting during one of my podcasts. Despite their age, they have been recognized and appreciated and this notoriety is derived from one of their first works, an operation of perfect transformism, that with a limited budget they have been able to express with creativity and playfulness. It is with an optimistic curiosity that they approach their projects and, exploring the potential of an architecture far from pre-established, obsolete schemes and paradigms, are able to amaze us with their fresh statements. 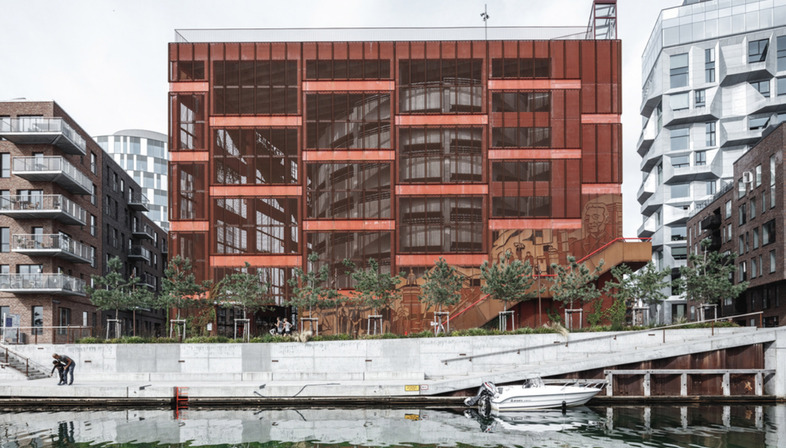 The mentioned intervention, emblematically synthesized by the title 'Park' n 'Play', has been nationally and internationally widely published, rewarded with many important recognitions. It is a multi-storey car park, a 7 storey concrete box, 24 meters high, absolutely anonymous, built in compliance with the most banal and economic traditional criteria of the genre, an element that has no connection to its context, the old port of Copenhagen, Nordhavn (North Harbor), subjected for years to a renewal that intends to ​​embrace in a vision of coherent urban coexistence the new, modern emerging neighborhoods and the most historic surviving areas. It is in the attempt to redeem a particularly privileged position, with the view on the Øresund strait, and the need to find a more congenial insertion between the future architectural identity marking the entire area and the older surviving parts that the team negotiates the situation, conceiving two solutions, one visual and the other physical, both very convincing and captivating. The large concrete volume abandons the coldness of its monotonous gray tone and, dialoguing with the red brick facades of the old buildings and the port warehouses, adopts their warm tones. A mesh of the same color overlaps and envelops it, adding a particular energizing effect, prerogative of the elemental informality of this industrial feature. The strategy finds an ingenious, very appropriate mediation able to translates an invasive mass into an attractive presence, a pole of cheerful exuberance. 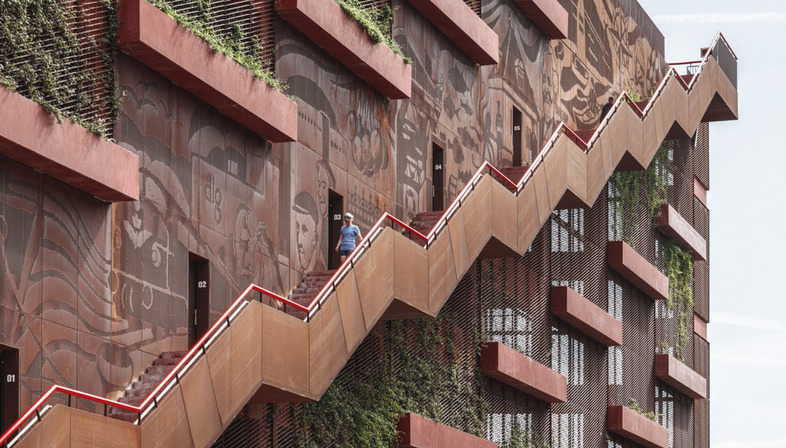 The building gradually lights up with life and a pattern formed by the arrangement of alternated planted boxes discreetly interrupts the entire facade, punctuating it rhythmically. Climbing green plants grow along the net, creating a strong and vibrant color contrast, and providing an unexpected organicity. Long diagonal stairways, zigzagging sculptural signs, ascend from street level, adhering to the walls of two opposite sides, offering their handrail as a guide to a surprising discovery: the extensive roof surface accessible and usable as a recreational space. The edge of that handrail that accompanies visitors seems to extend and, as a sort of fil rouge, unravel, swirling and rolling up to create concentric circles and pyramids, identifying points of different experiences, play, fun or exercise experiences or simply moments for a break, to rest while admiring the sea. It is with a crescendo of touches, all strategically amalgamated that the whole intervention enhances the full formal and social potential of an anonymous, dull structure, transformed into something exciting. This stimulating graft, capable of communicating to everyone its distinctive playful character, transmitting an almost childlike sense of lightness, combined with practical parking lots, reiterates how a hybrid building can be a winning architectural solution. The exemplary intervention will be a social meeting place and an active part of its local environment, attracting a very diverse community, residents and visitors, adults and children and helping to nurture new ways of living together. 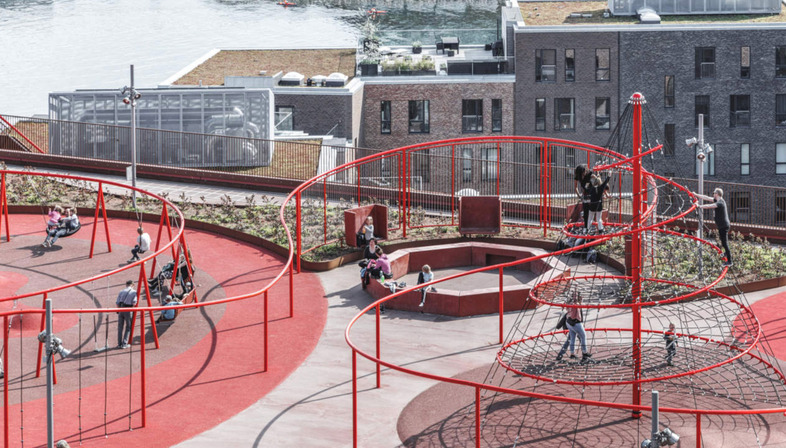 The new chapter that is opening in the Århusgade district, does not want to neglect its past and, ascending the stairs, you can observe the history of the port and its industrial past, artistically narrated, in collaboration with Rama Studio, specialized in graphic design, through images of merchant ships and famous people depicted along a huge graphic frieze obtained with perforation technique along the rusty red metal plates that cover the two walls. The desire to contribute to a built environment making it more flexible and inclusive, able to respond with adaptability to constantly evolving needs, pushes these young architects to envisage very interesting and original ideas. A recent competition sees them once again playing an active role with the proposal of a development in another district, Aarhus's South-harbour. It will be again a car park, this time Denmark's first wooden car park. The project underlines a recurrent prerogative that enhances the personality of their works: “the balance between the practical and the poetic”. The intervention, in the immediate proximity of the city center, the port and the central station, allows them, convinced supporters of the absolute need to reduce private means of transport, to encourage different, sustainable and non-polluting forms of mobility. In fact, the multifunctional building proposes itself also as a green mobility hub, presenting facilities at the ground floor supporting green transport and transport sharing, such as charging stations, cargo bike rentals, carpooling stops and parking spaces dedicated to car sharing vehicles. Part of a green oasis, with small pavilions, dedicated to social and cultural activities, scattered among the vegetation, it will easily convince people to leave the car and continue on foot, with a bicycle or even by scooter through the park's paths. As always not considered a simple container for cars, it will include in its 6 floors, 2,000 square meters of public functions such as a gym, a gallery and a cafeteria, distributed in different points to inject vitality to an otherwise lifeless building. The surrounding greenery will extend along the façade and balconies of this laminated wood structure (CLT), that will contribute, thanks to its minimal footprint and the plantation of a new urban forest, to ensure a lasting sustainable solution for the entire area. 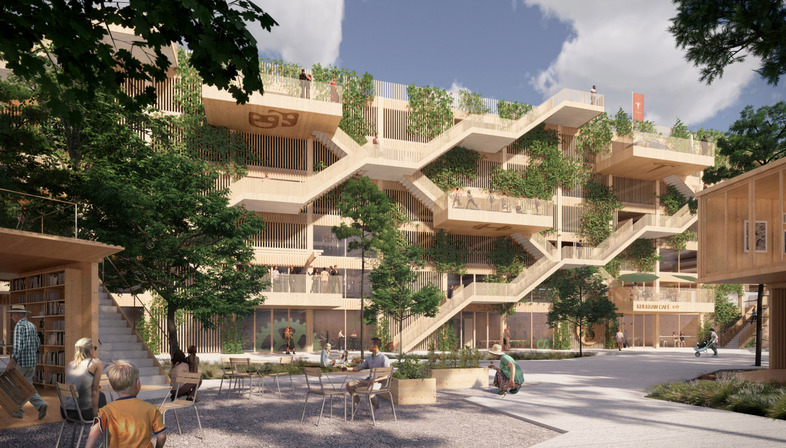 Another uniqueness, which I personally love about their work, is the ability to instill curiosity, stimulate wonder and an intense desire for discovery, making the public space desirable and encouraging an authentic appropriation of it by users. Their interventions try, so to speak, to remain unfinished, open to the new stories that will weave the future users, helping these kind of platforms to grow, evolve and even change. A simple and rough industrial structure, typical of the ‘60s, when it was still in production, inspires GAME Streetmekka Aalborg, an invitation to expand, or rather dissolve the boundaries between the large volume of the building and the street. It is the local urban culture with street art and murals, to which the former factory delivers its facade as a living canvas, with improvised dances, multiple spontaneous activities and unpredictable events that currently animates the old eternit laboratory, that, without renouncing its industrial charm, abandons the introverted character of the past to entrust its essence to the community.  The generous size of the empty interior appears like a huge teeming room: each contributes to an atmosphere of irresistible dynamism. Both sport and leisure furniture, designed with great taste, using improvised and largely recycled materials, have been skillfully reduced to the essential and perhaps for this reason maintain a sense of informality that makes everyone feel to be in a familiar environment, where anyone can find a corner to nurture and grow, adding an own contribution to develop the narration. 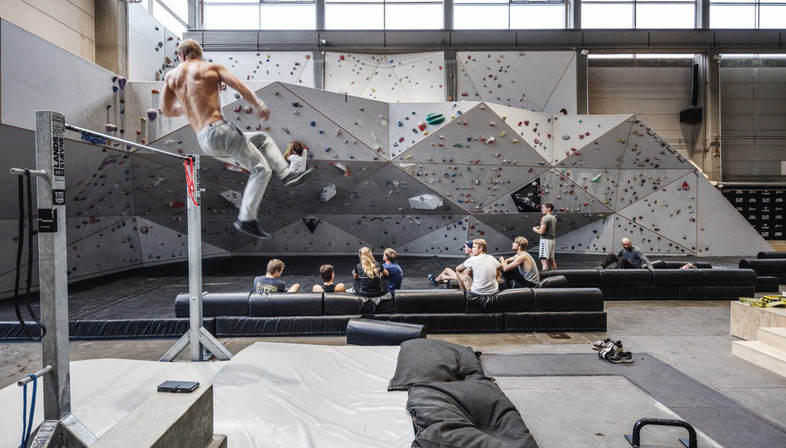 Our works intend "not just to take space, but to give space too", with these words one of the authors explains how to weave as many relationships as possible between what is and what will be, is the ultimate goal of their efforts. An ideal that they recognize in a city accessible to all, built for inclusion and diversity, nourished by the active involvement of the collectivity. The stories start from the buildings and come back enriched with new contributions, without imposing any program: are the people who each time define their own script, actors in a theater that welcomes them and wishes to give them the guidelines on the stage. 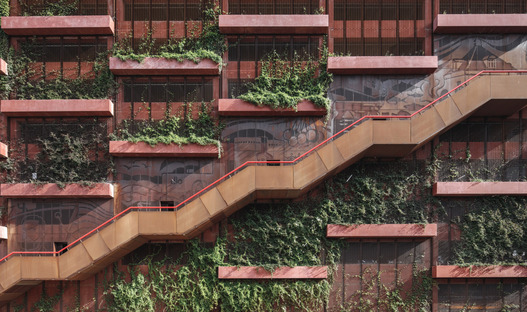 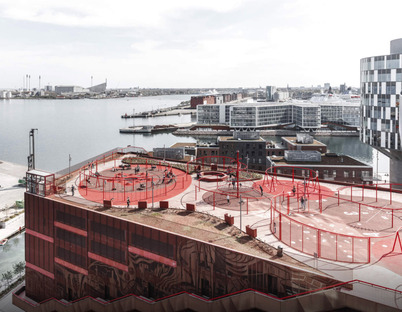 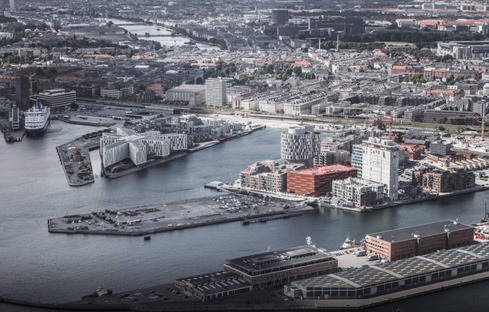 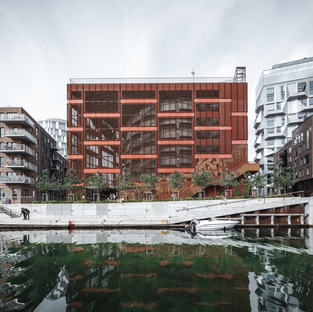 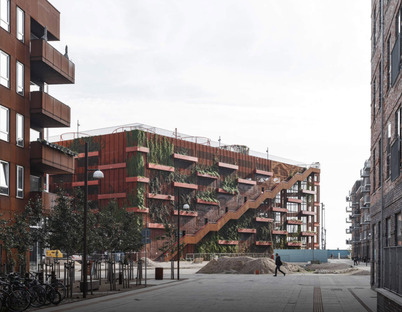 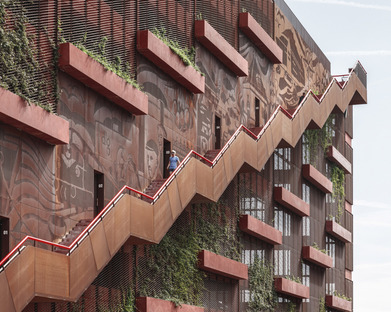 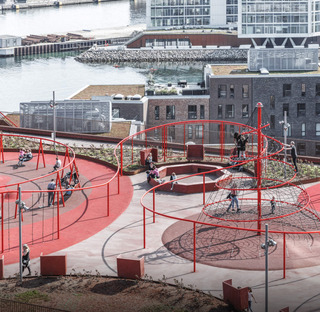 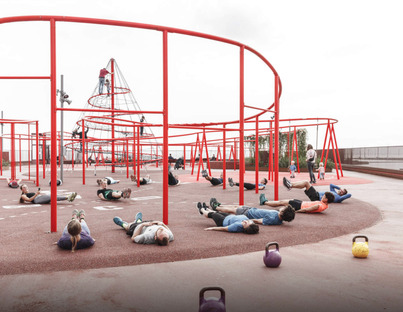 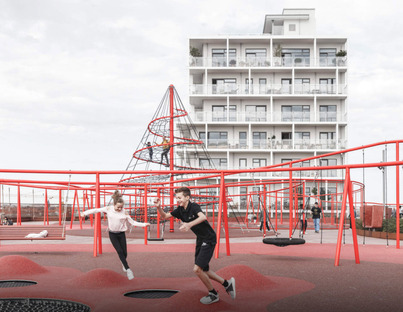 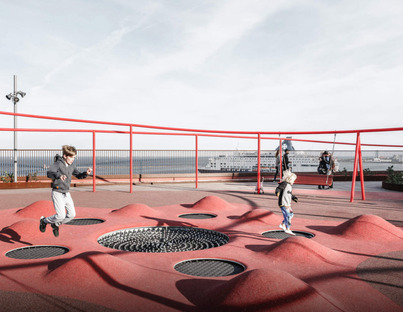 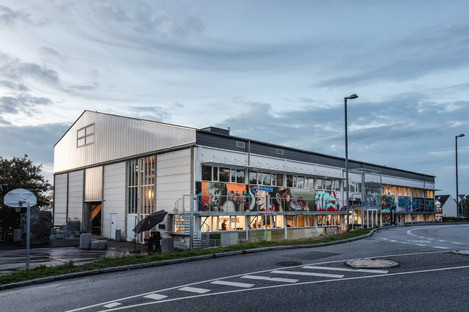 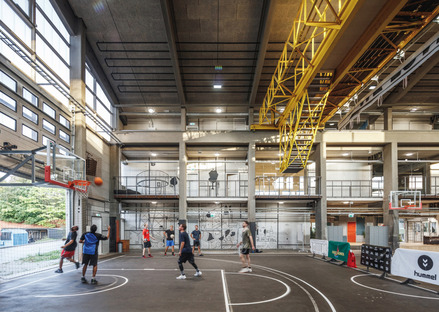 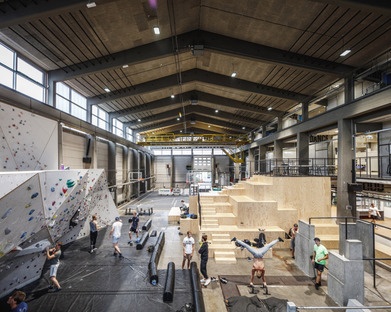 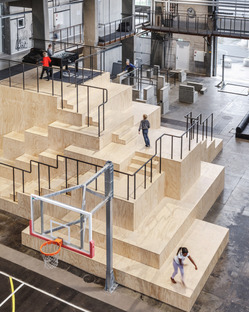 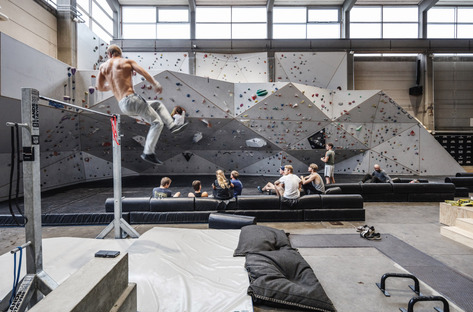 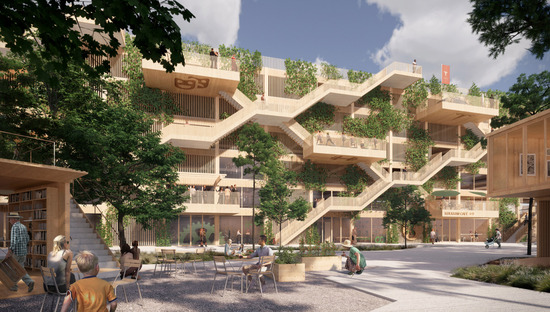 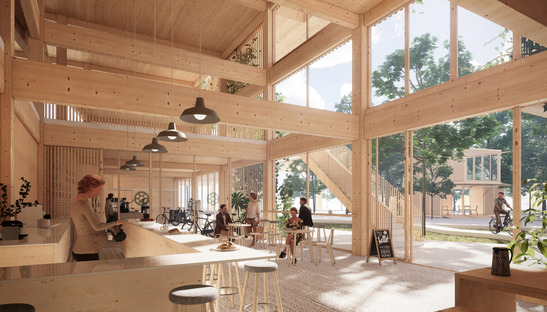 NEW GRAMMAR AND SYNTAX OF MATERIALS