In the long months of spring 2020, while millions of people were confined to their homes complying with the restrictions imposed by authorities to ensure the containment of the Covid-19 pandemic, photographers from the Italian Ministry of Culture travelled to 11 Italian cities recognised as UNESCO heritage sites, to capture a valuable visual testimony of this unprecedented historical moment experienced by Italy's cities of art, with the typical bustling streets devoid of tourists and locals. 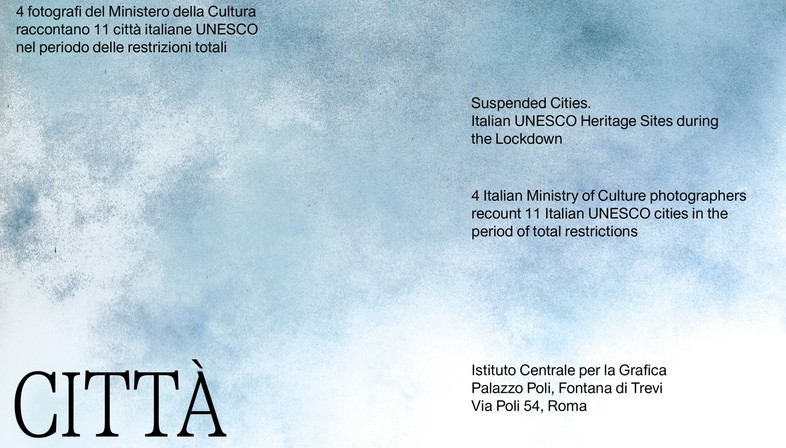 On May 20 a unique exhibition was inaugurated in Rome at Palazzo Poli, headquarters of the Central Institute for Graphics: “Città Sospese - Siti Italiani UNESCO nei giorni del lockdown”(Suspended Cities: Italian UNESCO Heritage Sites during the Lockdown). A narrative of images captured by four photographers from the Italian Ministry of Culture: Alessandro Coco, Francesca Lo Forte, Alfredo Corrao and Giuseppe Zicarelli. The four were entrusted to create a valuable visual testimony of the unprecedented historical moment experienced in the spring of 2020, when Italy's cities of art suddenly found themselves devoid of tourists and citizens, following the restrictions and travel bans imposed by authorities to ensure the containment of the Covid-19 pandemic.
The exhibition curated by Maria Francesca Bonetti and conceived by Margherita Guccione, Carlo Birrozzi and Paolo Iannelli comprises of a photographic campaign carried out in a series of Italian cities, whose historic centres are part of the UNESCO World Heritage List. A journey across Italy, from North to South, to catch a unique glimpse of the historic centres of large and small towns and cities. The protagonists of the exhibition and of the photographic series are, in alphabetical order: Alberobello, Ferrara, Florence, Matera, Naples, Pisa, Rome, San Gimignano, Siena, Urbino and Venice. These particular places were selected because they are designated UNESCO sites, with a strong identity recognised around the world, as well as because in the national and international collective imagination those iconic squares, streets and monuments have long been captured, associated and remembered as being filled with people. A choice which, thanks to the bold contrast, allows us to perceive, even more powerfully, the alienating and surreal condition of emptiness determined by this singular historical moment we all experienced. These cities and towns, which have long been ambassadors of Italian culture around the world, also became a mirror of the universal condition of isolation which the entire human race shared during those difficult months in early 2020.
The photographic narrative was created between April 25 and May 2, 2020, which saw the four photographers also receiving support from the so-called “Blue Helmets of Culture” (U4H Task Force) and the “Carabinieri for the Protection of Cultural Heritage” (TPC). A total of 2,560 photographs were taken including, where weather conditions permitted it, aerial footage.
In particular, the city of Rome was photographed by Alessandro Coco, the images of Naples were captured by Francesca Lo Forte, Alfredo Corrao photographed the historic centres of Matera and Alberobello, while Giuseppe Zicarelli documented the other towns and cities (Florence, Venice, Urbino, Ferrara, San Gimignano, Pisa and Siena).
The exhibition presents to the public only a selection of the rich photographic documentation captured, exhibited in a scenographic setting created specifically for the Sala Dante in Palazzo Poli. The essentiality of the support structures used to exhibit the photos help emphasise that familiar sense of time stopping or being suspended which, for much of the world, characterised that singular historic moment. The exhibition itinerary concludes with the screening of the video entitled "Quell’idea di bellezza" (That idea of beauty) produced by 3D Produzioni and based on the same archive of images captured for the exhibition. 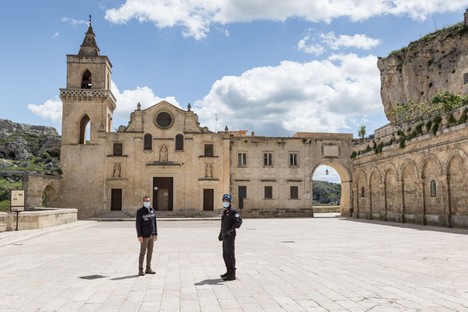 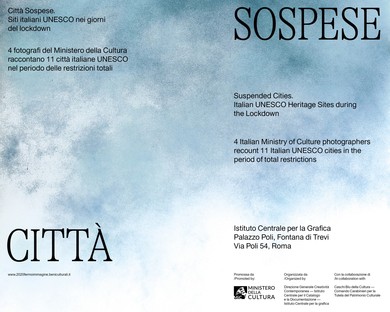 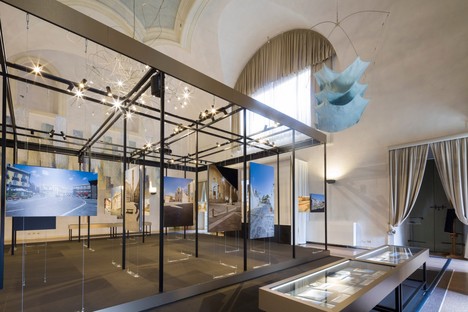 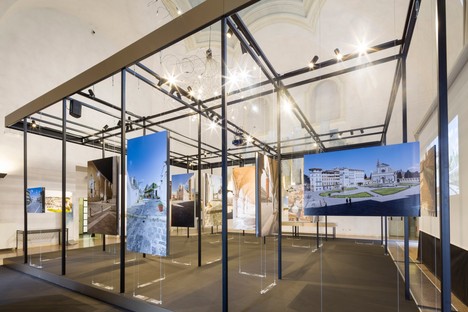 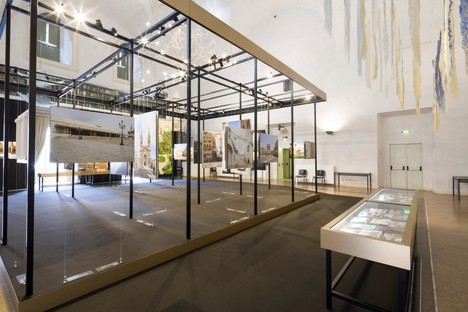 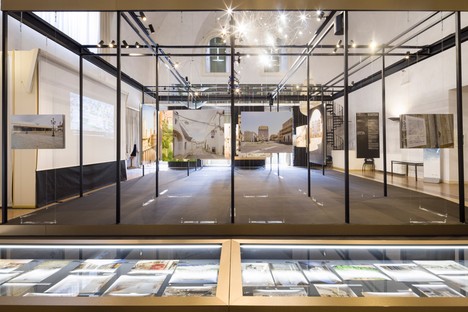 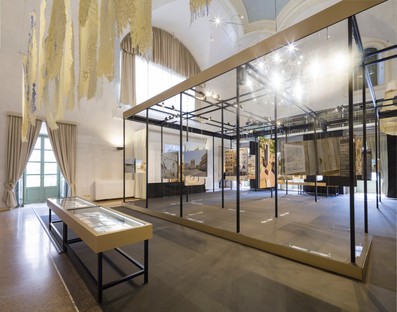 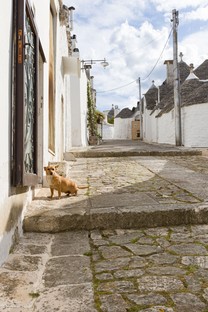 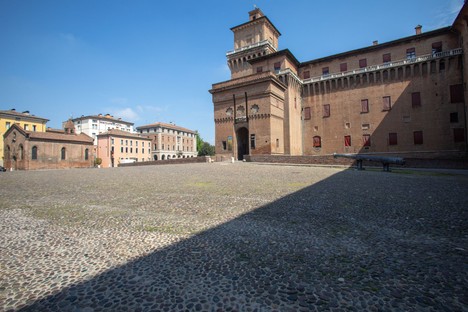 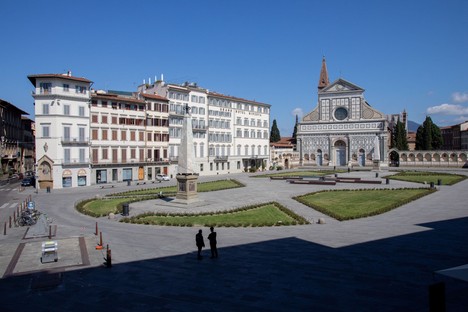 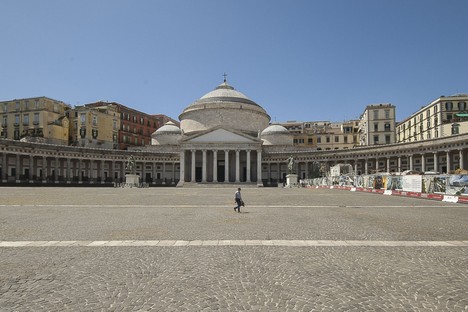 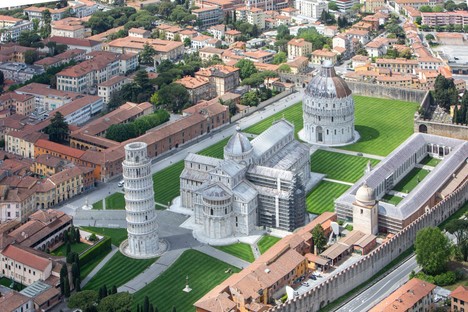 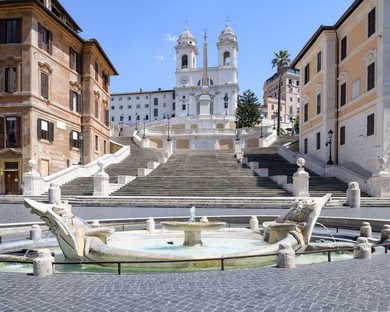 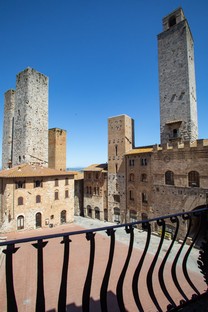 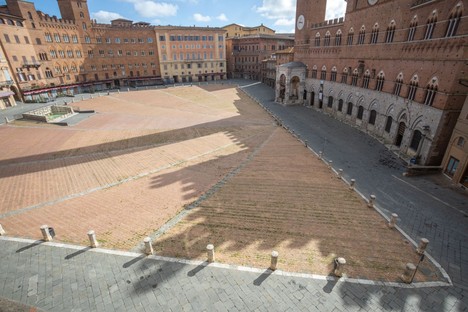 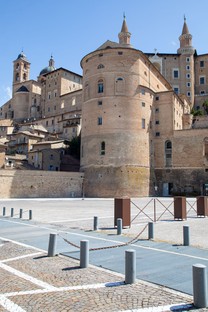 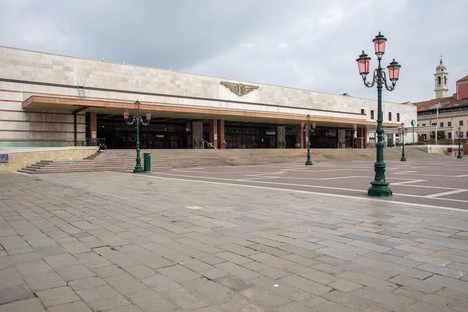