September 2017 through January 2018 Chicago holds its second Architecture Biennial, focusing on the relationship between history and modernity, between architecture and art.
Chicago is viewed as the cradle of modern architecture, the place where the skyscraper was born and the city where some of the world’s greatest architects worked: Louis Sullivan, Frank Lloyd Wright, Mies van der Rohe, Renzo Piano, Frank Gehry and more.
Our architectural itinerary winds through the city’s historic heart and business district, The Loop, corresponding to what is known in other American cities as downtown.
This is the tallest part of the city, in architectural terms: The Loop and River North contain practically all Chicago’s skyscrapers, its most imposing buildings, its elevated train system, Millennium Park and the city’s many clubs and restaurants. But The Loop also contains plenty of art: the Chicago Picasso, the Chicago Theatre, the Cloud Gate at Millennium Park and the amazing Chicago Art Institute 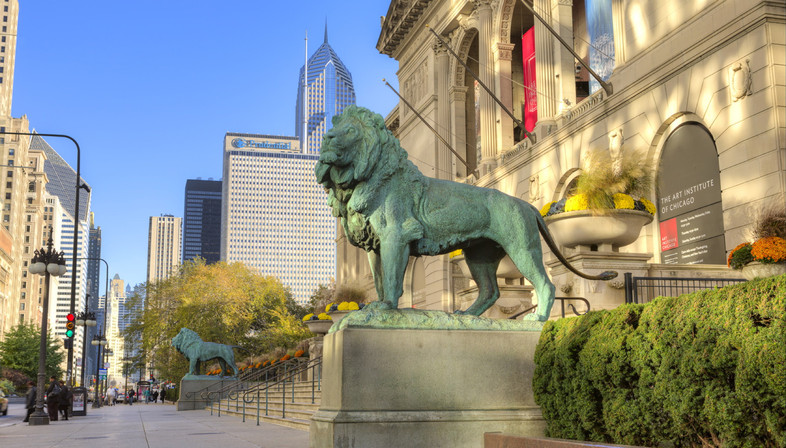 Willis Tower – Architect Bruce Graham and Engineer Fazlur Khan
The essential starting point for this itinerary is Willis Tower, designed by Bruce Graham and Fazlur Khan. Construction began in August of 1970, and the tower was the world’s tallest construction for almost twenty years. The structure of the tower is composed of nine gigantic tubular structures of different heights, standing side by side. The tubes support one another, reinforcing the structure as a whole and interrupting the force of the wind with their differences in height. On the outside, the building is characterised by big bronze glass surfaces supported by black anodised aluminium frames. Visitors can go to the Skydeck on floor 103, a balcony built entirely out of glass, including the floor, suspended over the void with breath-taking views of the city.

Art Institute of Chigago – Modern Wing – Architect Renzo Piano
The Art Institute of Chicago is in the middle of a big park, Grant Park, on the shore of Lake Michigan. The second largest art museum in the United States, it is best known for its nineteenth-century artworks but also contains plenty of classical and contemporary art. The museum’s Modern Wing designed by Renzo Piano contains such masterpieces of American art as Edward Hopper’s “Nighthawks” and Grant Wood’s “American Gothic”. Renzo Piano’s construction fits perfectly into the grid of the city, and is positioned according to the orientation of the urban fabric. The materials used reflect the traditions of Chicago: local limestone, the same material as was used in the older part of the museum, with laminated sheets of glass and an aluminium sub-structure. Renzo Piano’s design is all about transparency, light and sustainability, in which the most interesting element, as so often in the architect’s museums, is the roof: etched glass and steel girders form the complex “package” of the roof, a “flying carpet” floating 2.6 m above the ground, a “temple of light”, as the Chicago Tribune calls it.

Millenium Park – Pritzker Pavillon – Architect Frank Gehry
Located between The Loop and Lake Michigan, Millennium Park is Chicago’s biggest park. Created since 1998, it is a hanging garden that serves as an “exhibition space” for post-modern art and architecture constructed on top of an old railway line and a large underground parking lot. Its position made it necessary to pedestrianise the entire area, all the way to the lakeshore, and this was done with the addition of the BP Bridge, spanning the eight lanes of Columbus Drive. The four best-known works of art in Millennium Park are Cloud Gate, Crown Fountain, Lurie Garden and the Jay Pritzker Pavilion. Cloud Gate attracts plenty of attention: a huge sculpture, about 110 tonnes of steel, which the locals affectionately call The Bean, it is Anish Kapoor’s first artwork in America.
The Jay Pritzker Pavilion is the unique venue for the city’s summer outdoor concerts, designed by Frank Gehry. This revolutionary space has a roof of curved sails that appear to swell and bend in the wind, made of brushed stainless steel, connected to a trellis of steel piping which provides 4000 permanent seats; another 7000 people can watch the concerts from the grass. The amplification system, designed to simulate the acoustics of an indoor concert hall and distribute sound equally between the seats and the lawn, is mounted on the trellis.

Museum of Contemporary Art – Architect Josef Paul Kleihues
The elegant Gold Coast district is home to the Museum of Contemporary Art, where minimalist art and conceptual photography hold sway. This new museum designed by architect Josef Paul Kleihues is a visual homage to Mies van der Rohe and Chicago’s architectural tradition. The five-floor structure contains a theatre, an educational centre, a restaurant and a sculpture garden, as well as a gallery hosting continually changing exhibitions of the work of young and emerging artists.

606 Trail – Wicker Park
To get a glimpse of the city’s future, explore northern Chicago, along the 606 Trail, a raised trail along an unused railway line similar to New York’s High Line. And the growing Wicker Park district, where old factories with the feel of industrial archaeology now house trendy new hangouts and vintage boutiques. Wicker Park is known for its hipster culture, art community, nightlife and new food culture.

An important focus: Architect Frank Lloyd Wright in Chicago
The Loop
At the beginning of his career, Frank Lloyd Wright worked in the studio of architects Adler & Sullivan, contributing to many of their projects in The Loop. His name may not appear on them, but he worked on many of the details and decorations in the Fine Arts Building and the Auditorium Building. The Rookery Building, one of the most famous buildings created by the late nineteenth-century Chicago School, contains an entrance hall designed by Frank Lloyd Wright in 1905, with a glass and metal roof and a splendid open staircase. It is a private office building, but the lobby is open to the public during office hours.

Oak Park
Frank Lloyd Wright’s former home and studio, now a museum, is located in this outlying residential district, where he designed several homes in addition to his own. His home is now a museum open to visitors with a guided tour for groups, featuring modern furnishings and solutions he designed for his own family.
Oak Park is also home to the Unity Temple, a Universalist Unitarian Church attended by the architect and his family, completed in 1905: a simple, rational place of worship, full of light and spirituality.
Frank Lloyd Wright designed a number of homes on Forest Avenue: original homes in perfect condition are still visible at numbers 318, 238 and 210, while Thomas House is one of only a handful of stucco houses designed by the architect. 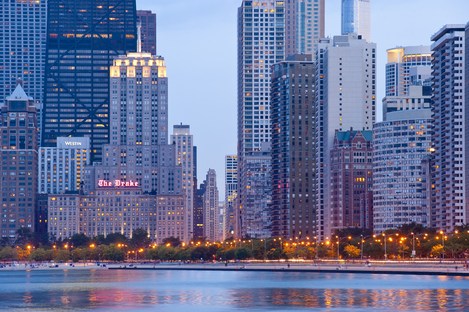 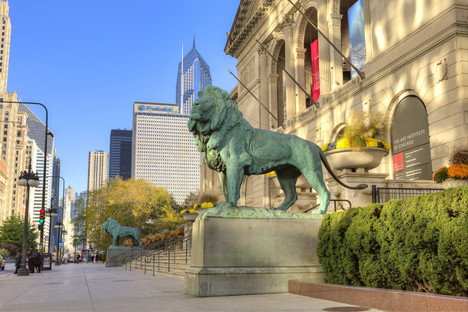 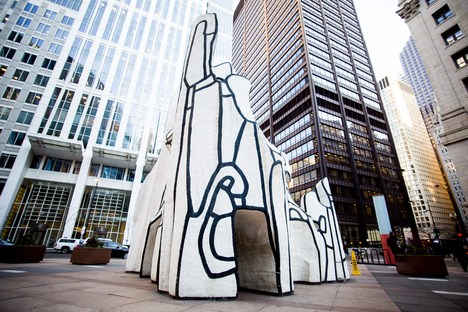 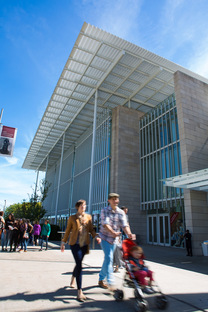 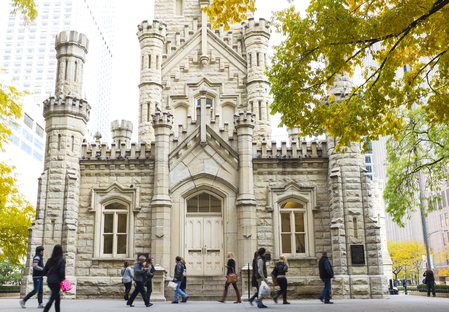 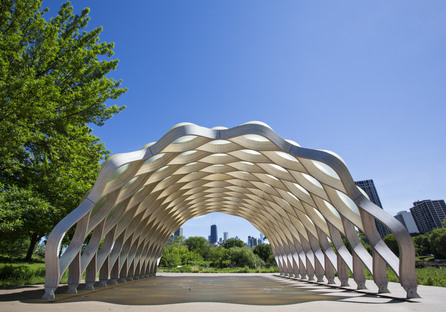 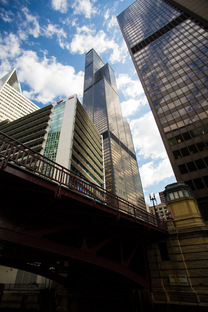 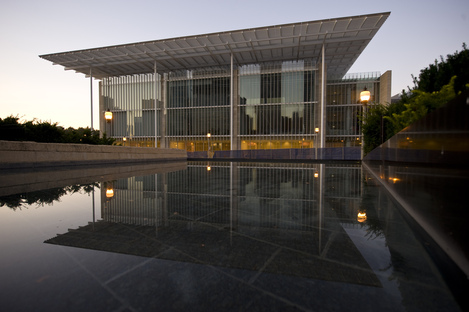 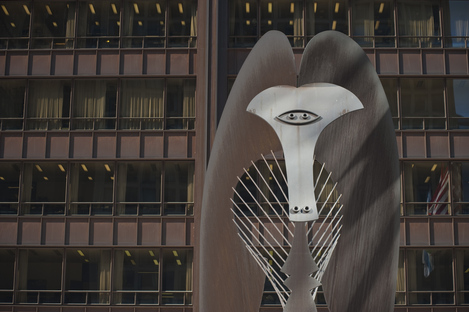 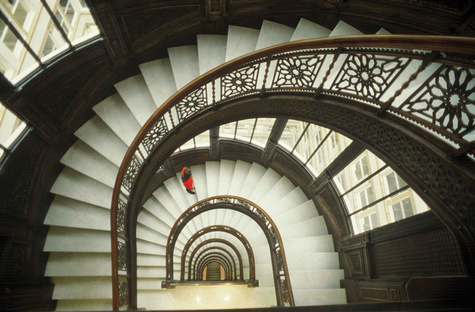 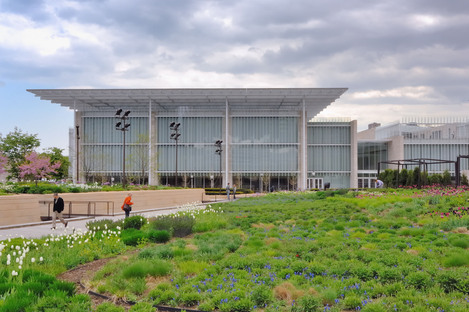 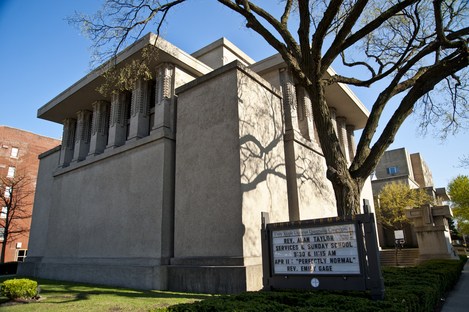 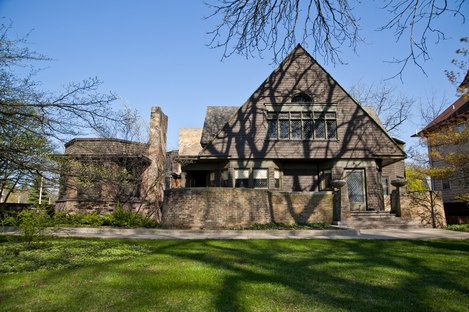