A world of interior architecture, furniture design, graphic design, light, art, and fashion: a true glamorous voyage through the habitat of music. 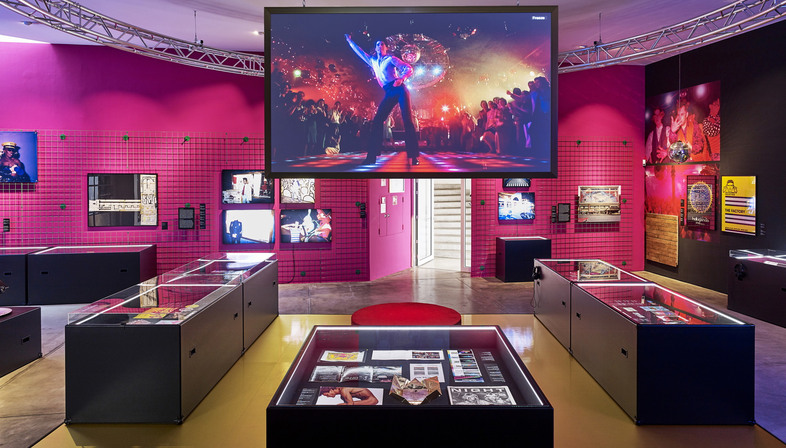 The exhibition Night Fever. Designing Club Culture 1960- today, at Vitra Design Museum in Weil am Rhein, Germany, open until September 9, uses furnishings, fashion, film documents, samples of music, graphic design, installations and light effects to tell the story of the design and culture of the music scene since the ’60s. An excursus into nightlife, in which key figures ushered in new developments contrasting sharply with social norms, images of new lifestyles, places and people. The architectural design of spaces for nightlife has changed since the 2000s, privileging locations outside of the city, where the legendary underground scene seems to be gone forever. In today’s big cities, urban cool venues where people gather at night are almost all devoid of aesthetic interest, like the old-fashioned Italian “sports bar”, without any particular charm or style. Perhaps what we need is another radical form of architecture, like that of the ’60s, which broke with the past, exploiting the potential of kitsch, colour and irony and distorting proportions.

The exhibition cannot help mentioning the Piper Club in Rome, opened in 1965, which soon became Italy’s best-known nightclub. This is where new foreign bands played, such as Pink Floyd, and contemporary artists of the calibre of Piero Manzoni and Andy Warhol hung out.
But Florence also had an important nightlife scene, with two important groups for radical architecture, Superstudio and Gruppo 9999, whose projects were inspired by New York’s Electric Circus.  While elsewhere in Italy, architect Ugo La Pietra opened Bang Bang in Milan, a nightclub in a boutique, and Ufo designed Bamba Issa in Forte dei Marmi, inspired by the 1951 Micky Mouse comic book Donald Duck in The Magic Hourglass, and 9999 created Space Electronic in Florence.

Sala da ballo Lutrario – now Le Roi Music Hall – Architect Carlo Mollino
Turin still preserves the kaleidoscopic dream of architect Carlo Mollino: Le Roi Music Hall. Mollino’s eccentric imagination designed a fairy-tale forest of ceramics and mosaics. Colourful majolica, disorientating mirrors and opulent marble lead us to the dance floor. The hall, of double height, has a balcony with a wrought iron railing and sky-blue sliding curtains. The space is lit up by coloured lights on a track that hang from the ceiling like stalactites. Some of the furnishings designed by Mollino at the time have now been recovered, including 12 of the original chairs, with their unique upholstery.

QI Clubbing - Erbusco – Architect Beppe Riboli
Simple, clean forms accentuate the dramatic architecture of a space designed in combination with technology, lights and projections. This bold architectural space consists of two main areas, a big dynamic mechanical cylinder and an immobile, crystallised diaphragm containing it. The outer ring of the cylinder mediates between the two volumes, like a sort of suspended landscape of colours and stage sets. A contamination among suspended glass spiroidal walkways, optic fibres, cables, lifts, motors and tie rods.

Reflexo - Urgnano – Architect Beppe Riboli
A very unusual venue with high walls of glass enclosing six hundred square metres of space, divided into two separate zones used at different times and for different purposes. The spaces are separated by a light diaphragm, a glass wall and an oak bookcase. Materials such as iron and plexiglass, marble, prefabricated concrete, and corten are intentionally mixed with vintage furnishings to create a bold contrast.

Cocoricò - Riccione
This glass and steel pyramid-like structure has been a temple of Italian techno music and mecca of dance music since the late ’90s. A true shrine for alternative clubbers.

Lidò Disco Club - Montecatini Terme -  Interior Designer Fabio Madiai
Designed using the same technique as a stage set, the space is made unusual by a bridge that divides the pool area into two parts to provide space for tables. An entirely soundproofed bridge forms a private lounge resting on the water. The unusual colonnade is a series of pillars and columns. This unique blend of interior design and scenography is based on the waeli style, in which ageing adds value to materials.

Gibò – Ciolo -  Santa Maria di Leuca – Architect Ippazio Fersini
In his book L’architettura di Pietra Alfonzo Acocella says of Gibò: “This building is so intimately connected with the rocky landscape that it does not appear to be a human creation but a rocky formation spontaneously emerging out of mother earth”. The club has a spectacular view of the sea and the rocks. Measuring 8000 square metres on five levels, perched above the sea in Santa Maria di Leuca, it has more than 25 patios over the sea, two of which are set right into the rock, on two levels, with an ancient cave called Prazziche di Sopra, a Unesco World Heritage Site, perched on the top.
In 2013 MICS in Montecarlo (Monaco International Clubbing Show) named it Best Italian Club of 2013. 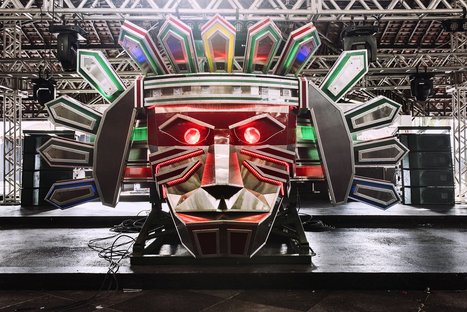 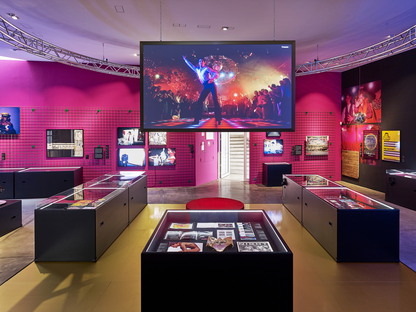 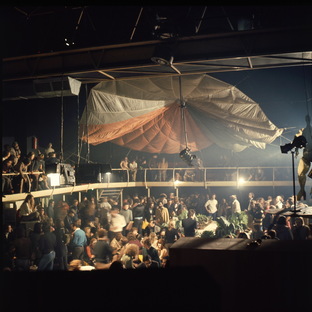 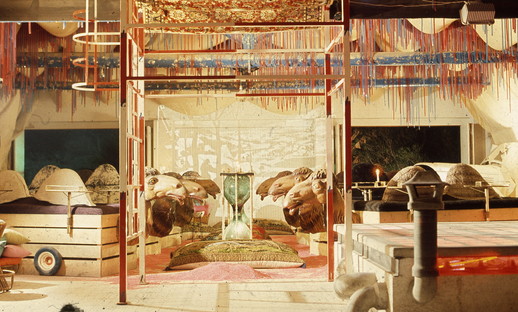 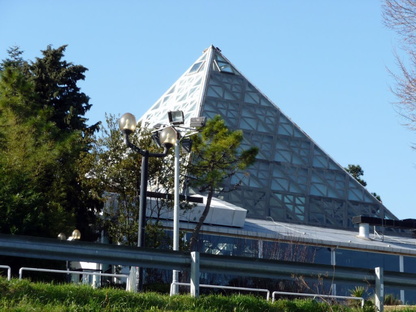 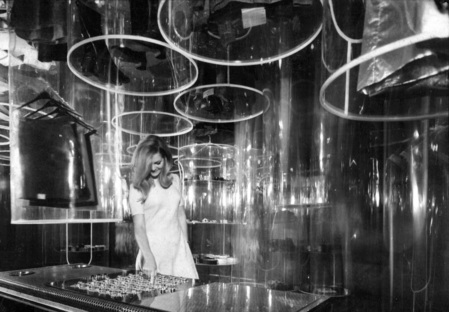 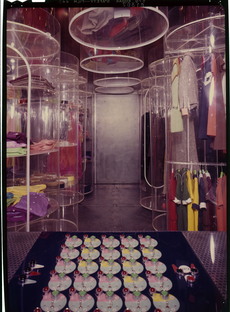 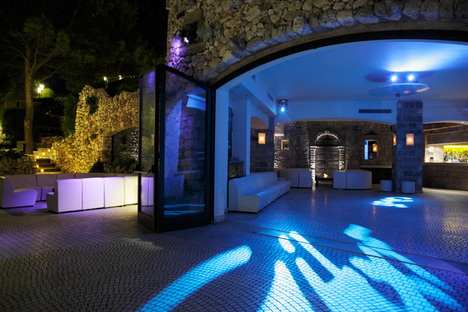 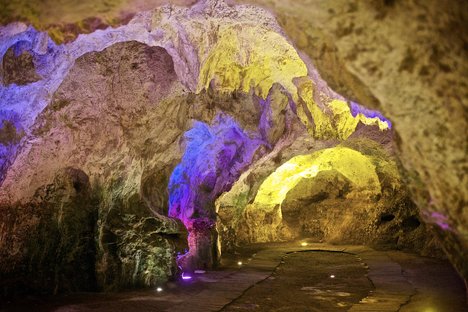 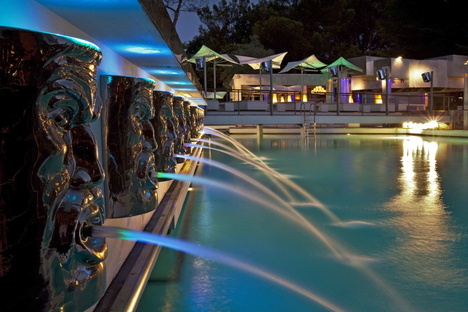 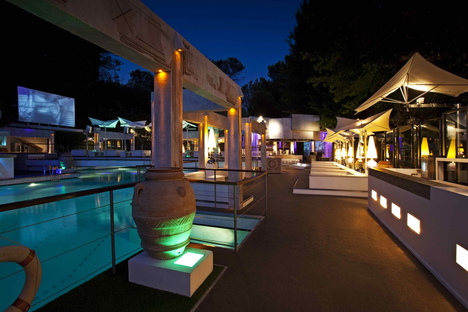 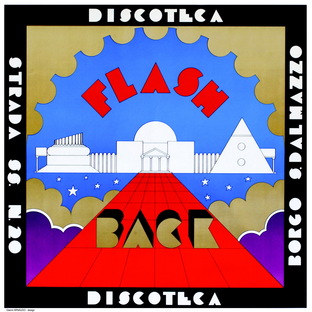 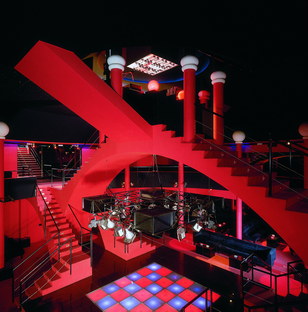 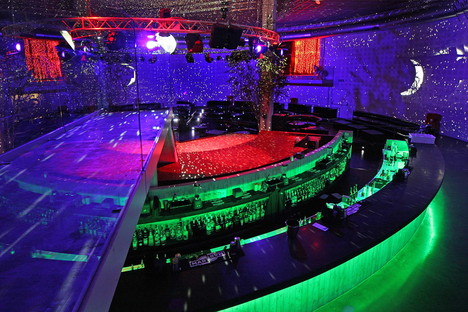 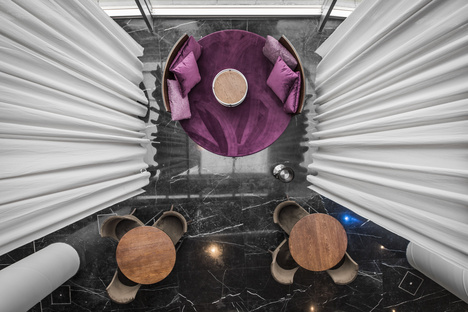 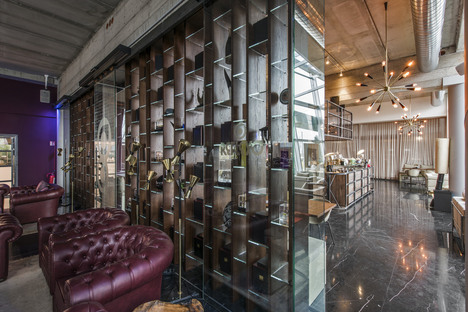 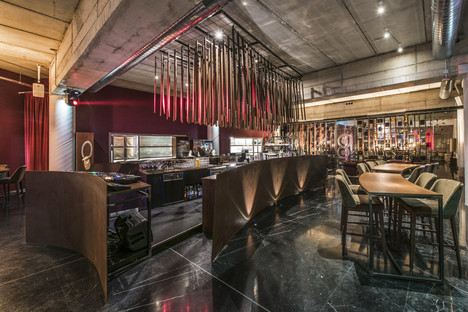 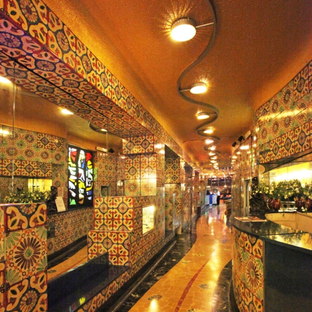 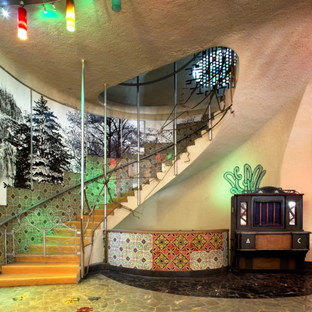 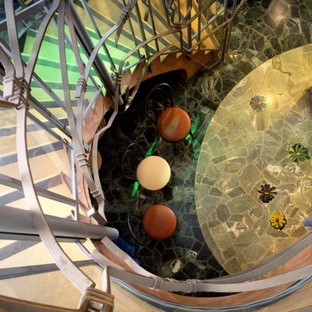 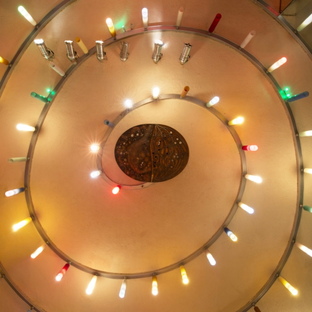