Now that we all know that the pandemic is not going to disappear any time soon so we won’t be making a rapid return to our former habits, the Argentina-based architects Fernando Hitzig and Leonardo Militello from hitzigmilitello arquitectos, have completed the design for a restaurant that provides efficient and impressive responses to hospitality in the time of COVID-19. 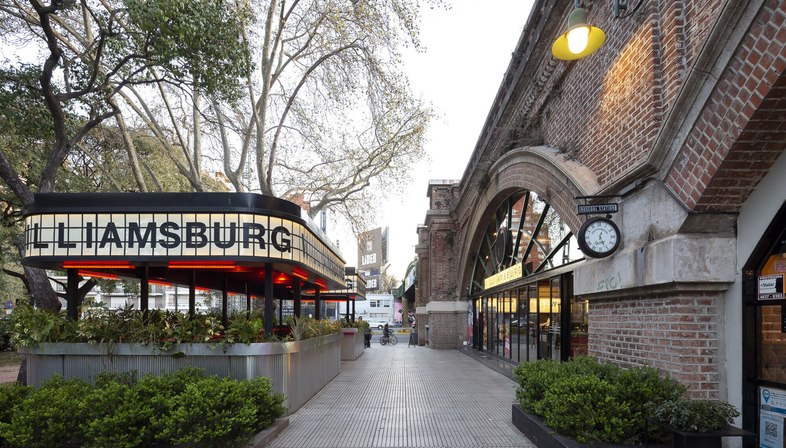 Rather than creating the Plexiglas cages that we have seen on many websites - and in some cases even in the real world - as a way of reducing the risk of contagion during the pandemic, the architects of the Argentinean hitzigmilitello arquitectos led by Fernando Hitzig and Leonardo Militello have created a much more attractive response.
Their project called Williamsburg is in Buenos Aires, in the Palermo district, famous for its social scene and nightlife. This neighbourhood is home to eclectic restaurants, chic cocktail haunts and quirky fashion stores. It’s also close to nature with Parque Tres de Febrero featuring a rose garden with a lake, Japanese gardens, a Poets Garden, and the Buenos Aires Zoo, and the MALBA (Latin American Art Museum of Buenos Aires) that collects and promotes 20th-century Latin American art, as well as the Evita Museum that gives visitors a glimpse into the life of Eva Perón. The district is also home to an interesting urban redevelopment project involving the old railway buildings from the early 20th century, near Parque Tres de Febrero. These have been converted into trendy venues for people flocking to some of the city’s finest boutiques.
Of course, with the new social distancing rules to curb the spread of COVID-19, the spaces inside these old buildings and their exposed brick vaults aren’t large enough to accommodate all the customers. For this reason, the owners of the Williamsburg hamburger restaurant approached hitzigmilitello arquitectos, who were responsible for other projects in the area, to design an outdoor dining area that would resolve their problems of capacity.
This entirely external space with a surface area of 54 m2 provides seated-only dining adjacent to the restaurant but in an area whose aesthetic and construction qualities are designed as if it were completely independent while complying strictly with the Covid-secure regulations imposed by the healthcare authorities.
The long, narrow, pavilion-like structure has two asymmetrical façades, with one of them opening towards the street and the shops, a way of inviting passers-by to stop, relax and enjoy a meal. Known to our readers for their pragmatic and materials-based approach, the architects have come up with a creative way of using the various decorative elements. So the structure is distinguished by clearly visible perimeter bars which are in turn softened by the presence of green vegetation right around the counter area.
As branding experts, the architects went with a movie billboard-like sign at the top showcasing the name and making the venue easy to find. This very bold sign of black letters on a white background, together with fibreglass bars and circular PVC strips, adding bright pops of red to the overall metallic materiality really stand out against the much more restrained context.
The idea is for Williamsburg to put itself out there, without false modesty, making people want to drop in for a bite to eat and enjoy each other’s company protected from the weather while remaining outdoors, in a Covide-secure venue. Here, hitzigmilitello arquitectos prove that you can use creativity and design to resolve lots of the issues associated with our present situation without having to hide away and go without a social life. 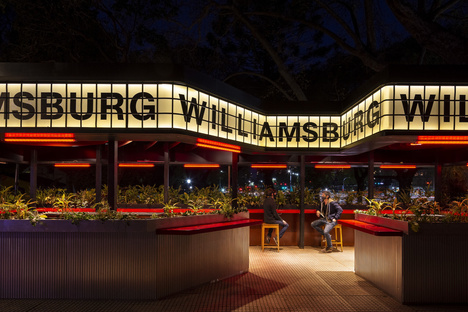 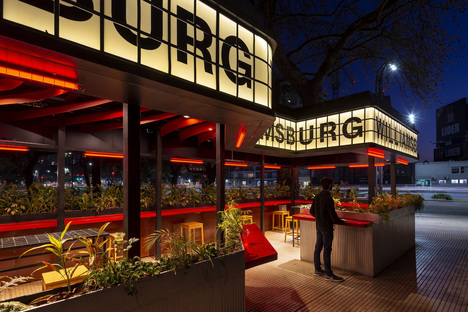 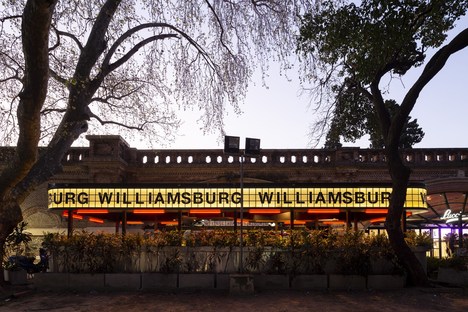 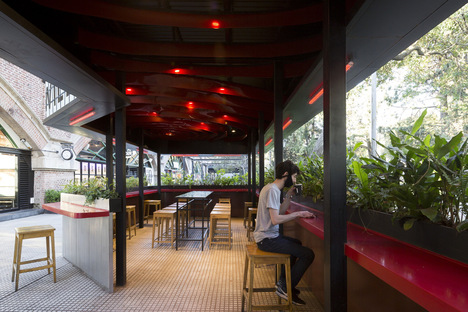 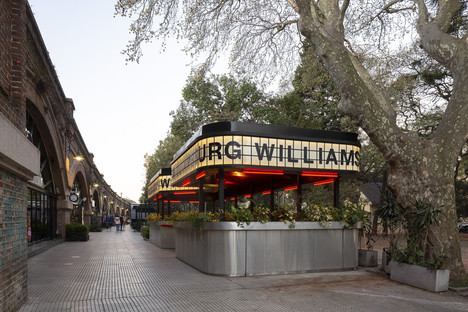 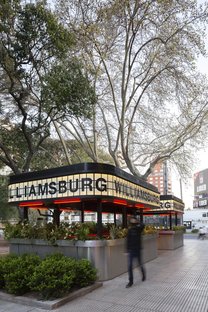 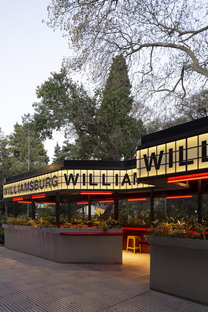 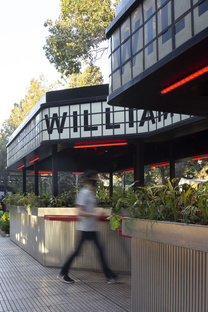 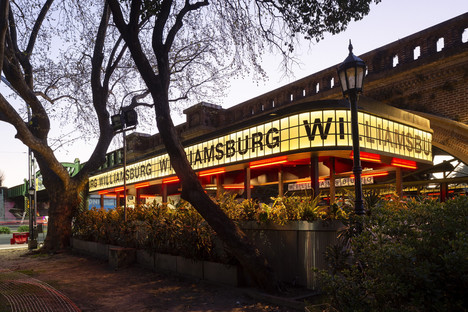