Young French architect Philippe Sarfati is one of the 2019 Open competition winners in the Architecture category of the Sony World Photography Awards, one of the world's leading photography competitions.

Young French architect Philippe Sarfati is one of the 2019 Open competition winners in the Architecture category of the Sony World Photography Awards, one of the world's leading photography competitions. His photo - Heatwave - is part of his long-term project titled Territories and depicts the 21st Century Museum of Contemporary Art designed by SANAA, in Kanazawa, Japan.


More than 327,000 images – a record-breaking number of submissions – were entered in this year’s Sony World Photography Awards, an annual competition organised for 12 years by the World Photography Organisation and featuring four sections: Professional, Open, Student and Youth. Philippe Sarfati had some tough competition.
His winning architecture photograph called Heatwave depicts the 21st Century Museum of Contemporary Art designed by SANAA, in Kanazawa, Japan. It was entered in the Open section and is part of his long-term project titled Territories. His take is rather unexpected because Sarfati’s Territories, being previewed on Floornature plays with the idea of contextual portraiture referred to architecture. On the one hand, he uses the architecture as a frame, focusing his compositions on a subject with bold volumes and strong lines. On the other, he brings in people to give meaning and scale to the spaces showcased. Their attitude becomes fundamental to how we perceive the building.
We chatted to the young French architect about his experimental series, which he says is still a work in progress. It all revolves around his interest in telling a story rather than just providing a description and in his awareness of the inadequacy of photographic reproduction for so much architecture once it is built. Which is why, despite it being based on the real world and the constructed product, it still seems to be defined by those same goals of abstraction and purity running through the increasingly perfect renderings, with images that tickle our fancy years before certain buildings actually take shape but that often remain sterile illustrations for their own sake.
“I want to show buildings through their users. I want to share a moment in time, when a person interacts with a building in some way, revealing something special about it. That takes a lot of time because I apply the technique of street photography or documentary photography. I don’t usually know what I'm looking for until I actually get to the location. I react to the way people act around the architecture and I strive to capture that moment,” explains Sarfati. The architect continues: “I think people develop a relationship with spaces. And that’s what I’m trying to show: when you look at the images your perception of the building is influenced by the attitude of the person portrayed. And the intrinsic shape of the composition helps to bring the subjects into focus, it gives them a stage. In the images, people and spaces cannot be separated, you see them together, appreciate them together, understand them together.”
Sarfati tells us that his inspiration for this came from Ila Bêka & Louise Lemoine’s films. He first starting working on this series about three years ago and the format has since evolved into monochrome photographs. He explains that this means he can make the connection between the people and the spaces more intense in a pictorial way, without the distraction of saturation. But don’t be fooled into thinking that this is a nostalgic return to black and white because behind Philippe Sarfati’s photos is a clear desire to want to show buildings with an uncommon format for architecture photography, where real people - real users - make the difference, as we can see in the gallery that he decided to share with us.

- Herzog & de Meuron's recent Switch House at the Tate Modern in London
- Foster's Gherkin in London (the two men were guarding the building on Easter Monday. They told Philippe about their life in the building, the little problems they had to deal with because of the design)
- Inside Dongdaemun Design Plaza, by Zaha Hadid, in Seoul, South Korea
- Herzog & de Meuron's Prada Store in Omotesando, Tokyo.
- the recent Palais de Justice de Paris, by Renzo Piano
- Rotterdam, OMA 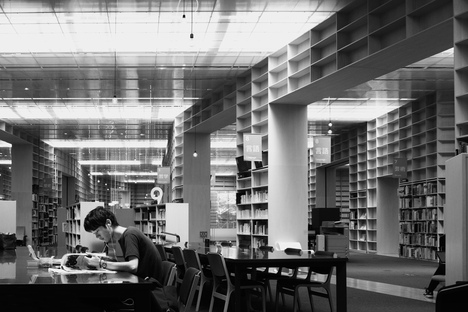 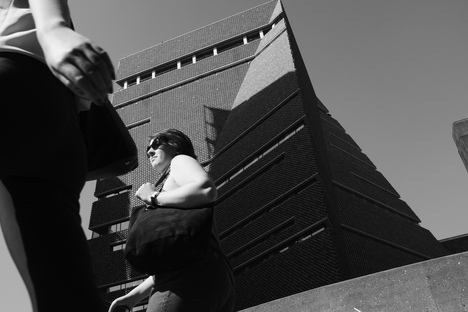 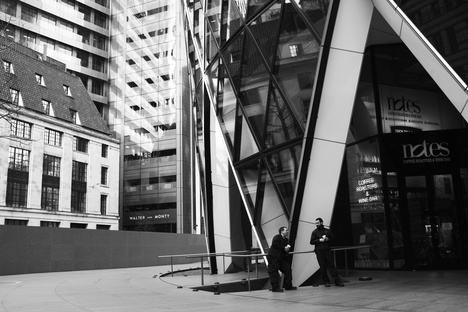 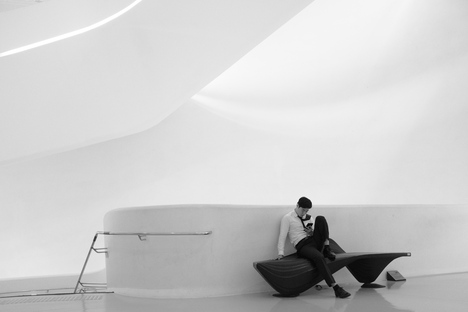 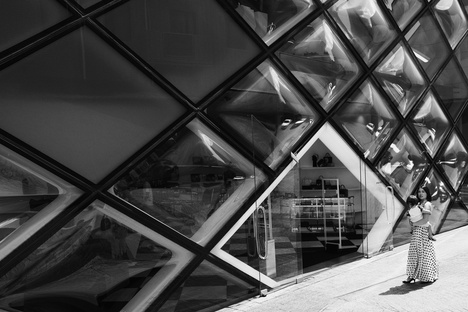 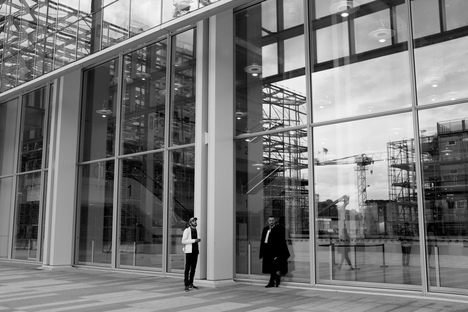 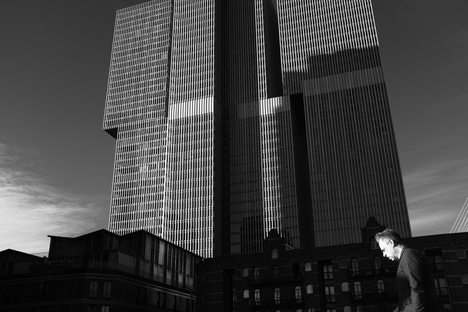