Leopold Banchini Architects was commissioned by the Bahrain Culture and Antiquities Authority to design the Al Naseej Textile Factory as part of a programme to support the country's traditional crafts and industries. This new textile factory, located in Bani Jamra, combines palm leaf weaving, as a construction technique, with tapestry and cloth weaving. 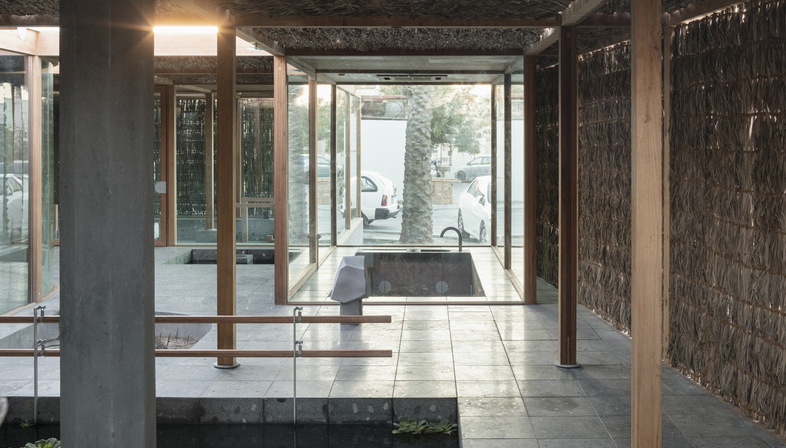 Bani Jamra is a small village in Bahrain, a kingdom and archipelago in the Persian Gulf. Like many other places in the country, before the discovery of oil, most of the inhabitants were engaged in agriculture, especially cultivating date palms and weaving, so much so that it became a centre for the production of traditional textiles. This art, however, was in danger of being lost. Hence the decision of the Bahrain Culture and Antiquities Authority, as part of a programme aimed at reinvigorating the country's traditional crafts and industries, to invest in the revival of the textile tradition. Indeed, the Bani Jamra - Al Naseej Textile Factory is a centre that now aims to revive such a centuries-old practice.
The new factory, created with the intention of providing a weaving facility and social space for the artisans of Bani Jamrah, was built to the design of Swiss architect Leopold Banchini and his firm, Leopold Banchini Architects. He has been active in the Persian Gulf area for many years, and with the involvement and contribution of the local community.
In line with his desire to revive local traditions, Leopold Banchini started his design from what in the Arabian peninsula are huts woven from date palm leaves or barasti. These buildings exploit the leaves' property of absorbing excess humidity at night, while during the day, they humidify the hot air by gradually drying it out. This construction technique, called arish, in fact, uses the dried leaves of date palms by weaving them into a durable surface. Moreover, until the 1950s it characterised the urban landscape of the Gulf. Above all, it was a community enterprise, with tribes and families working together to complete the dwellings.
This traditional history was the starting point for the decision to propose such a technique to build the new textile factory, where the fabrics and the architecture to protect the artisans were woven locally. And not only that, in the past, in the shadow of a light arish structure, Bahraini weavers would dig a hole in the ground to insert their legs. The architects explain: "With this simple action, the ground was transformed into an endless table for stretching the threads necessary for their delicate work."
The building was thus organised through a dense grid of columns and wooden beams, also recalling the date palm plantations of the north of the island irrigated by a complex network of canals. Single-storeyed, it has a quiet grid-like street façade, extending around the entire perimeter of the site, while palm trees sprout between the ceilings, becoming its characteristic expression.
On the other hand, the interior faithfully reproduces the old traditions of the pits in which the weavers sit while working with the loom. All are re-proposed with more refined materials and that formal cleanliness that has always distinguished Leopold Banchini's work. Thus the spaces for tapestry production, weaving and social exchange are defined through a series of excavations below floor level. On the other hand, the grid structure's rigidity is lightened by date palms, water basins and fountains so that the distinction between inside and outside is eluded. The designers say: "The structure is both a garden and a building, open but protected. The specific functions enclosed exclusively by glass panels dissolve into the shaded garden."
The overall result is a sustainable architecture, achieved in response to climatic and social needs, and realised with local materials in honour of the building and craft traditions that find a new showcase here. 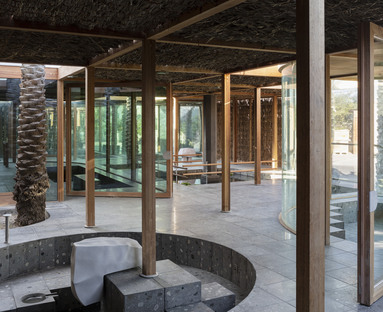 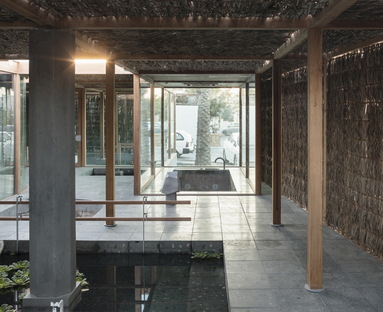 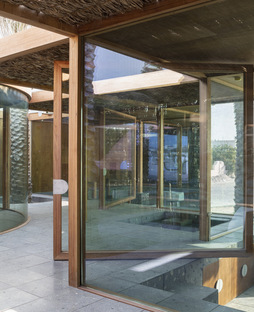 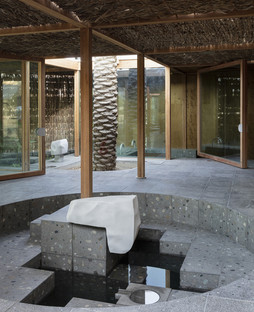 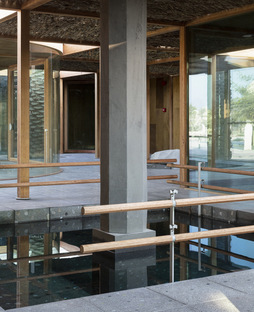 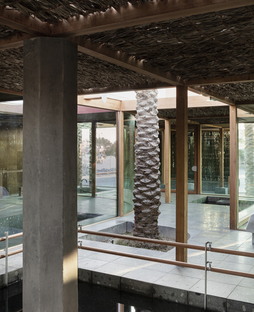 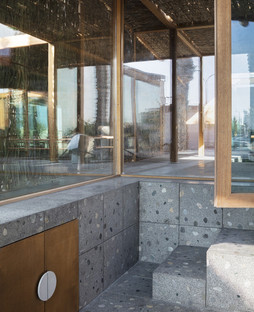 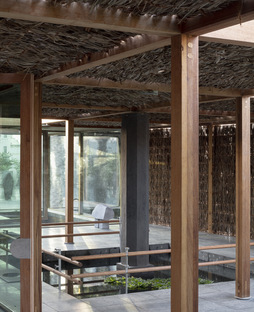 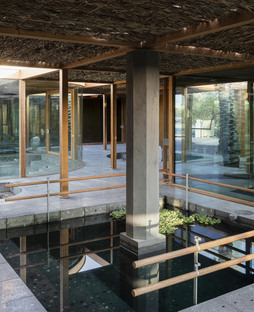 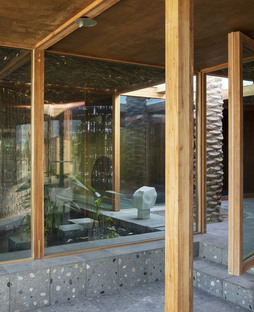 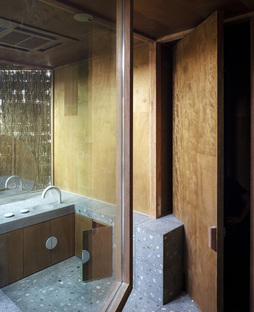