A park in Čakovice, in the Czech Republic, has undergone a regeneration project to better integrate the green area into the Prague neighbourhood around it. The project is implemented by landscape architecture studio Land05, directed by Martina Forejtová, while S K U L L studio designed the Superpower Wall, an art project on the wall marking the park’s southern boundary. 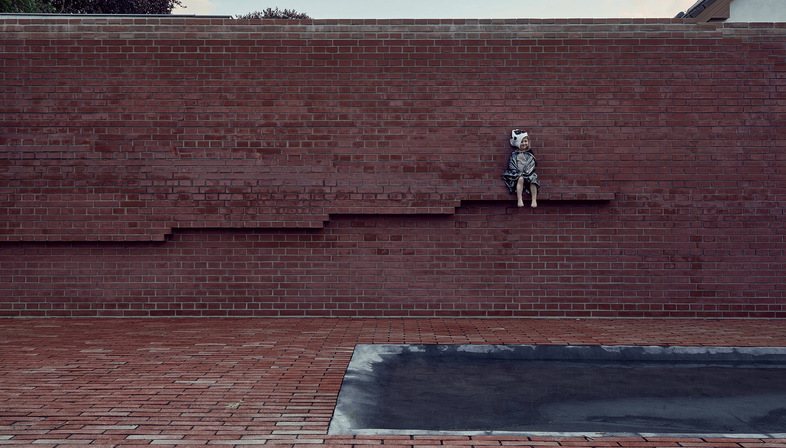 The site of the park celebrating the Hussite revolution in the town of Čakovice, now a northern suburb of the Czech capital, Prague, was historically a lakeside holiday town. At the time of the First Czech Republic (1918-1938), the lake was drained and the land converted into a village green. The area has changed repeatedly since then: the homes on the shore of the original lake have been demolished, but the remains of their roof gables were still visible until the recent redevelopment of the area, in 2019-2020. This project redefined the position of the park in the neighbourhood: previously, people had not stopped in the park but simply walked through it on their way to the railway station. The local authorities invested in infrastructure to make the park a part of daily life in the neighbourhood and ensure that people enjoy it.
Landscape architecture studio Land05, directed by Martina Forejtová, planned the transformation of the park, while S K U L L studio was invited to participate in the design of a boundary wall along the park’s southern side. The result is a sculptural-architectural monument in brick relief entitled Superpower Wall.
Sculptor Matěj Hájek of S K U L L, the studio he founded in Prague in 2020 with photographer Bet Orten as a laboratory where thoughts, notions, concepts and visions are given material form, made out of objects of all kinds, comments that the wall “is a memento of what is no longer here, which nevertheless leaves its imprint on the place and time," a reference to the brick walls of the old houses that once stood on the site. The wall is constructed out of a traditional building material but covered with a clear photocatalytic nano-technological coating that cleans the air around it. " The invisible plays a dual role here. On one hand there’s the nano-technological coating which depends on sunlight in order to function, and on the other is memory, fragments of recollections that exist only in our imagination. What is essential is not what we see, but precisely that which escapes our vision," adds Hájek.
The landscaping project includes creation of a new fountain which can also serve as a children’s swimming pool, designed by XTOPIX studio. The brick relief Superpower Wall is complemented in close proximity by this new water feature, which is very popular with the park’s youngest visitors; its colour and shape recall the lake that was once the centre of the site. 42 new apple trees have been planted, while new ornamental flowerbeds, designed to bloom from early spring until autumn, complete the project. Benches invite passers-by to stop and relax amid the greenery, in a park that is finally now perceived as a place for spending time in contact with art and nature in the city. 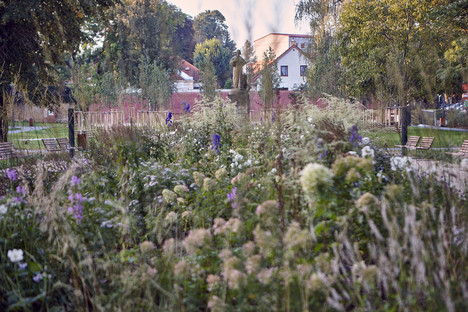 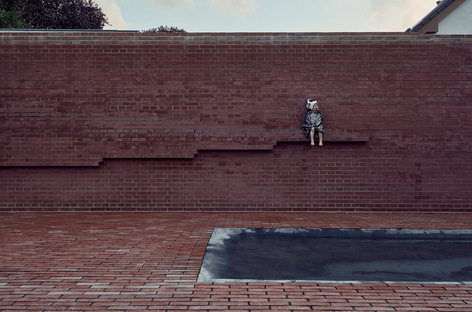 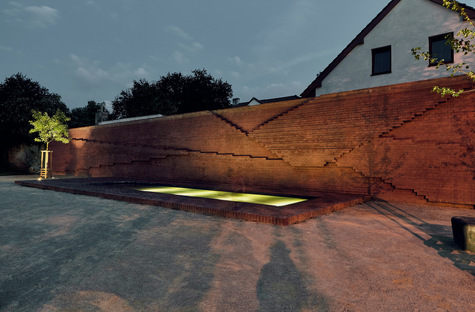 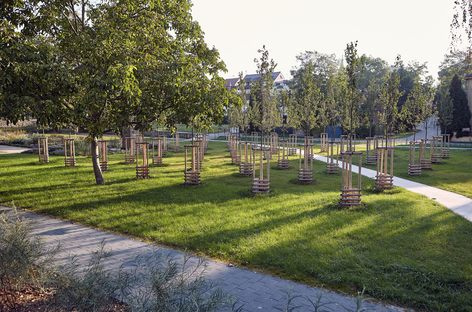 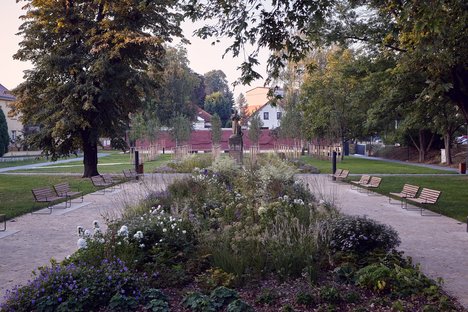 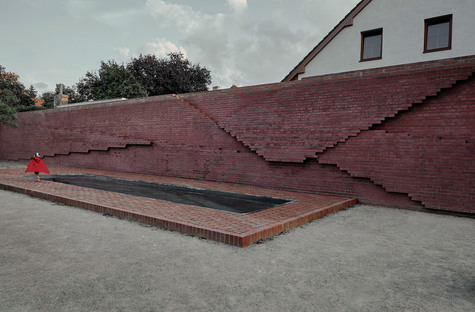 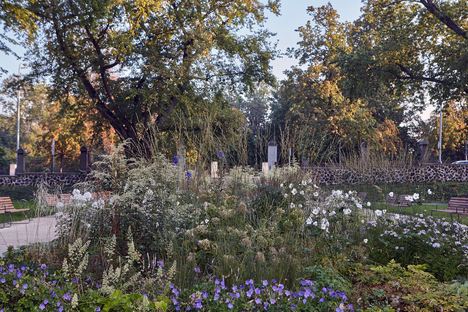 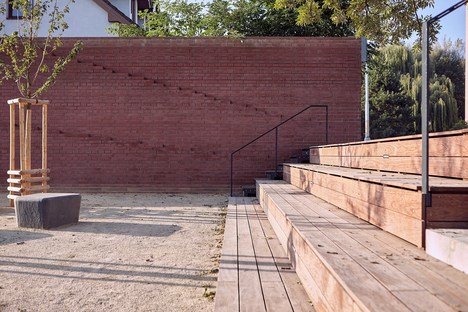 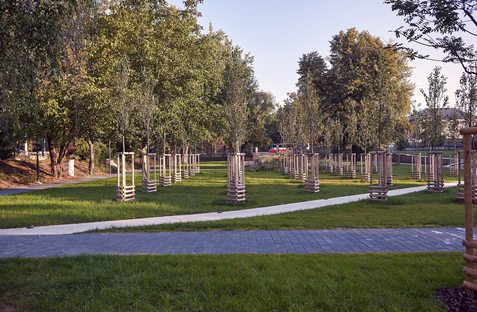 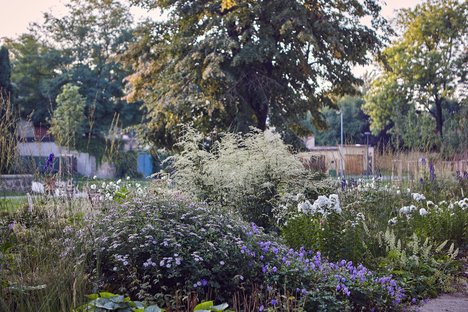 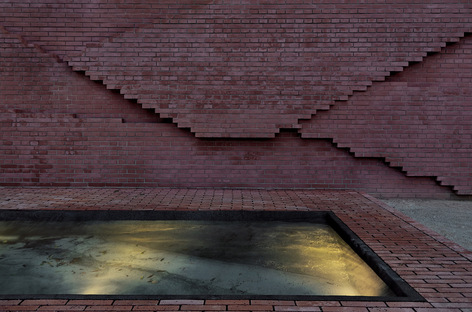 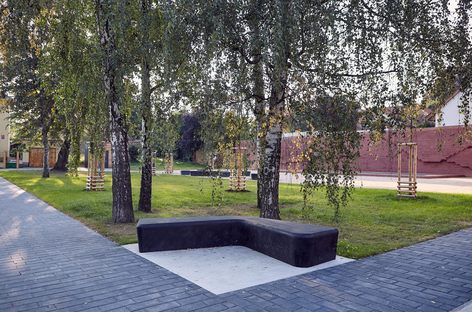 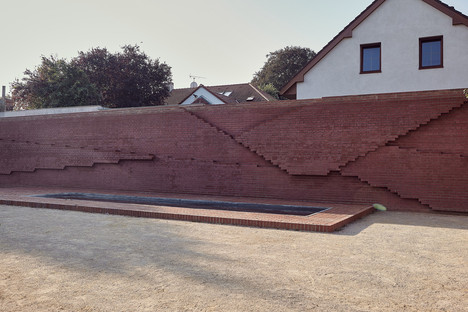 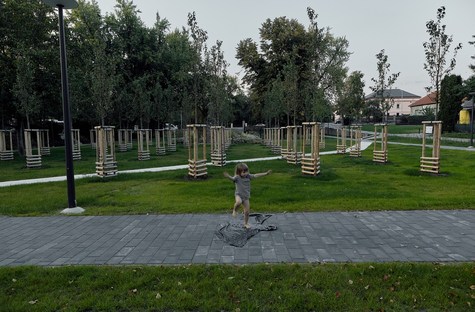