Following the competition for the design of the new Limassol Terminal, the Cyprus-based IrwinKritioti Architecture studio created the first building specifically built for cruise ships on the island of Cyprus. A series of elliptical shells stretching for 350 metres along the pier replace the old industrial warehouse that has provided basic services for many years, as well as allowing for alternative uses of the structure. 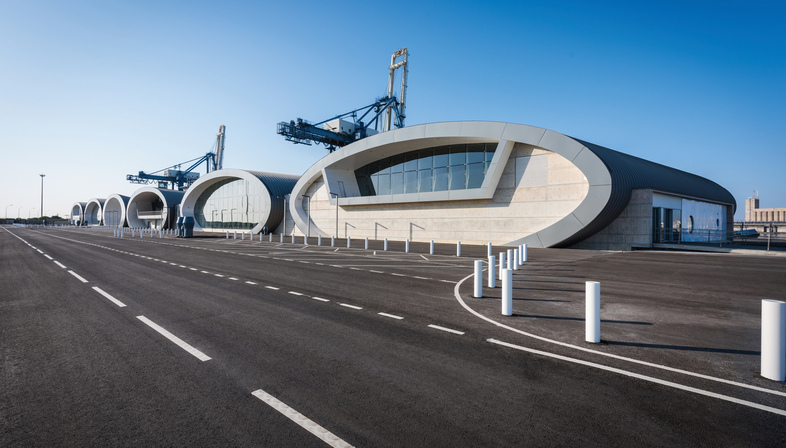 Flexibility and multi-functionality are two important words in the world of architecture, as they allow a building to be easily adapted to new uses or to host other functions, guaranteeing its continuous use. We all know that a very specific structure such as a cruise terminal is likely to remain underused most of the time, with peaks during departures and arrivals.
But is all this sustainable? Certainly not, and the architects of the IrwinKritioti Architecture (IKA) studio, founded in 1995 in Cyprus by Margarita Kritioti and Richard Dickon Irwin, also know this. This is the very reason why their proposal won the first prize of the competition held for the new building, with a design that starts precisely from the mixed use of the iconic structure.
Approaching Cyprus by ship, the first sight of the new building is the undulating titanium zinc roof, whose appearance changes based on the time of day and the season. The linear scale and rounded forms of the terminal allow it to stand out among the heavy ships and cranes that surround it in the port of Limassol. The new terminal, in fact, required a strong visual identity to stand out in this oversized industrial context, while still providing a tranquil place for the expected annual flow of half a million passengers.
Upon disembarking, passengers pass through ovoid halls, where the walls and ceilings have been replaced by a continuous surface of wooden planks. These, in turn, are animated by the reflections of the sun and water from the huge openings and polished floors. White wooden board interiors, on the other hand, are a direct reference to shipbuilding of the past, creating a pleasant contrast to the darker, ribbed metal characterising the exterior. One of the elements that was key for the Irwin Kritioti Architecture studio was the visual dialogue with the port context and the sea.
The architects explain in their press release that "despite being a controlled border with all the necessary custom and security requirements, the building has managed to remain visually open and permeable. In doing so, it avoids the potential labyrinthine layouts and deep spaces that can occur in transit buildings." This attitude is also seen in the architects' early decision to simplify the design solution, offering distinct operational shells, each connected to the outside view to obtain a building that is simple to service and easy to navigate.
Apart from the beauty of the spaces designed by IrwinKritioti Architecture, what is striking about the Cruise Terminal is the choice of designing it in such a way as to allow for alternative uses of the terminal spaces outside the tourist season. From weddings to conferences or even exhibitions: the arrival halls of the new Terminal, in fact, have the right characteristics to host these activities. A rooftop Skybar welcomes non-travellers, as well as those who are on a cruise. As the architects explain: "As Limassol continues to expand west towards the port, the multi-use building provides a platform to integrate local city life with the dynamic activities of the harbour."
The Limassol Cruise Terminal, completed shortly before the global pandemic brought the cruise industry to its knees, was selected by Architizer as the Jury winner for the Interior Transportation category of the A+ Awards 2021. 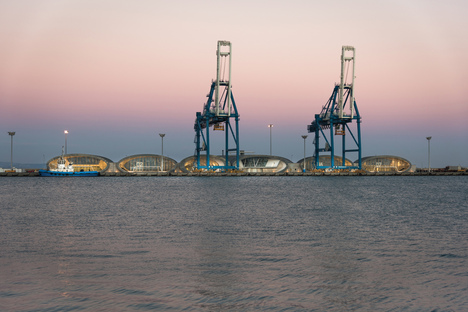 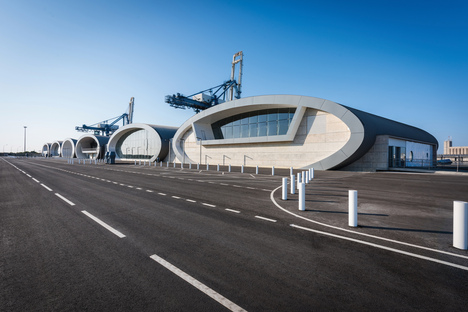 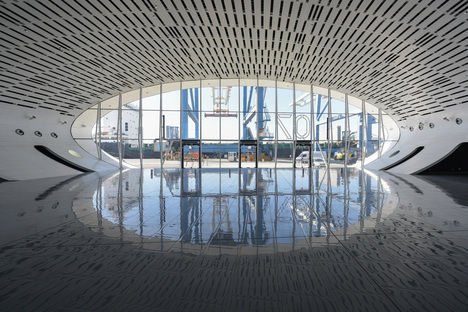 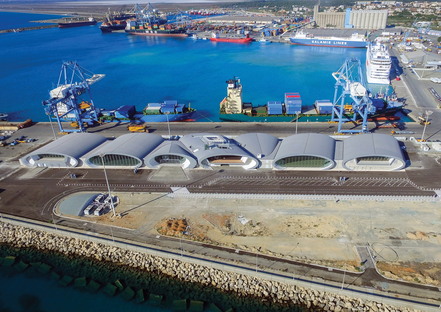 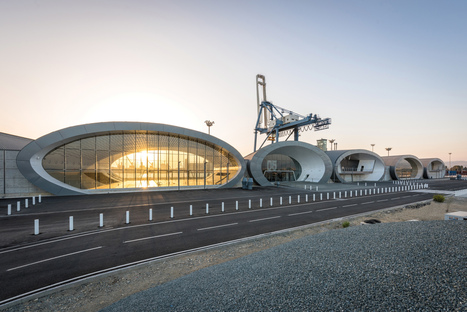 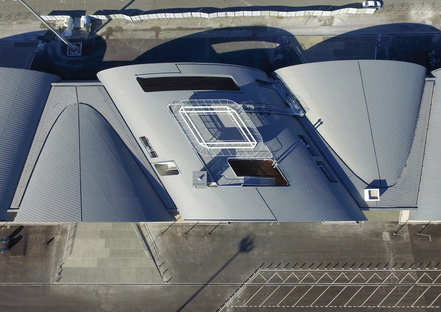 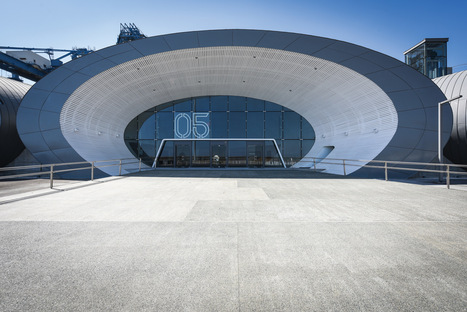 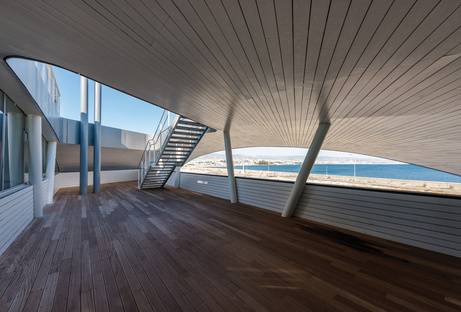 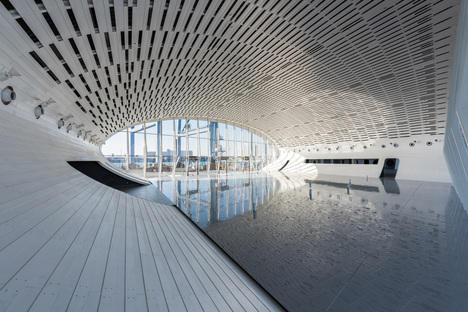 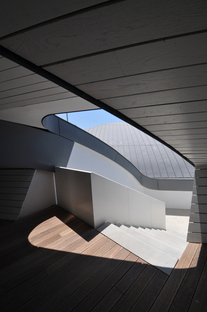 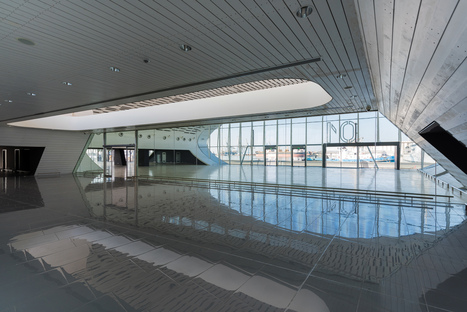 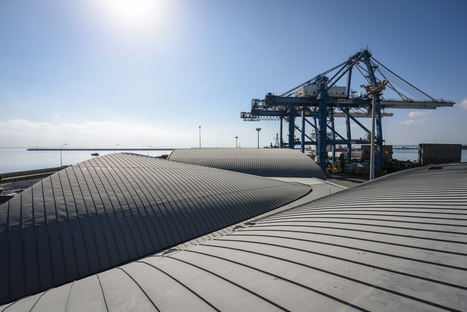 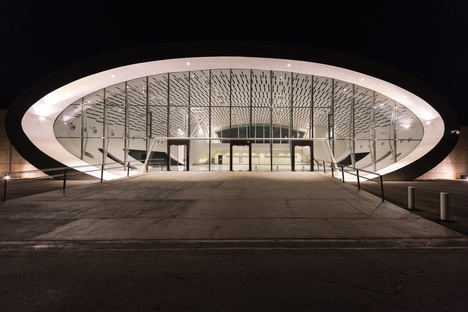 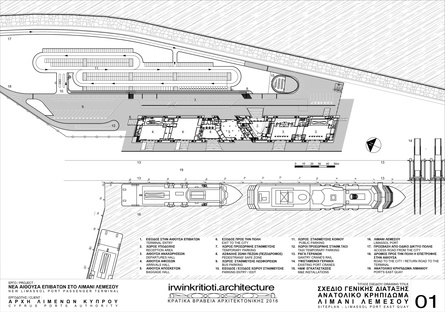 The MAAT in Lisbon, project by Amanda Levete