Moxon Architects completed the restoration of two buildings in Fraserburgh, Scotland, joining them with a new addition to form a single architectural complex housing Aberdeenshire Council. The project plays a key role in the 2021 plan for regeneration of Fraserburgh’s urban heritage and conservation area.

Fraserburgh is a fishing town in the far northeast of Aberdeenshire, Scotland, the biggest shellfish fishing port in Europe as well as a busy commercial port. The town wished to revitalise its historic core with a project that would act as a catalyst for future and ongoing restoration work. Moxon Architects’ project was financed by HES (Historic Environment Scotland), HLF (Heritage Lottery Fund), SGRCGF (Scottish Government Regeneration Capital Grant Fund) and Aberdeenshire Council.
The project includes three components, beginning with the Town House at 1-3 Saltoun Square. Designed in 1853 by architect Thomas Mackenzie, the building has hosted the council chambers ever since, and is particularly admired for its domed rotunda supported on Corinthian columns and its unusual sandstone exterior. Where the existing original parts of the construction were in good condition, the interiors were repaired, while compromised parts of the building were stripped down to bare brick. The internal linings, both new and restored, and details were finished uniformly in white to reveal the delicacy of the restored mouldings and the original “lincrusta” wall coverings.
The second component of the project was the adjacent derelict police station, now reintegrated into the town’s urban fabric.
The third component involved construction of a new contemporary extension, a volume clad in corten steel which joins the two existing buildings and contains municipal services such as meeting rooms for the public and the town council, served in turn by a series of supporting structures. Improvement of vertical and horizontal circulation alleviates the pressure on the existing buildings to allow them become more efficient and welcoming to the community. In architectural terms, the new extension forms a bold rectilinear volume to the rear of the two restored buildings. Use of weathering steel and curtain walling clearly distinguishes the new extension from the original buildings, without appearing to dominate over them. This is an architectural project specifically addressing two important urban elements: firstly, it is built using materials with colours, textures and patterns directly referencing the town’s defining industry while offering new views of the harbour area from above. Secondly, it dialogues with the public housing of North Braeheads, for which it provides a newly active frontage enlivened by the movements of building users and the layering of reflection, shadow and light.
The new complex has been named Faithlie Centre, a reference to the town’s original Scottish name. On the whole it is a highly accessible structure that fits well into its urban surroundings, enhanced by the work of Moxon Architects masterfully combining the old with the new to give the city a more sustainable future. 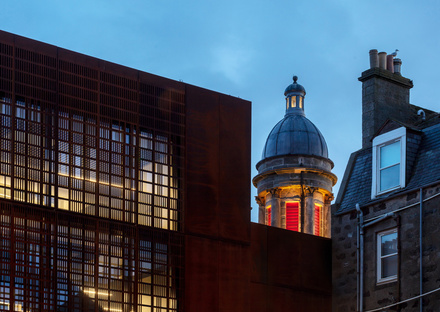