Quentin Aubry and Zeger Dalenberg’s Studio audal designed Empathy Park in Seoul, South Korea: a park for everyone, from insects to animals and various categories of people. The installation was created for the Seoul International Garden Festival with the Korean landscape architects of Timperley Garden. 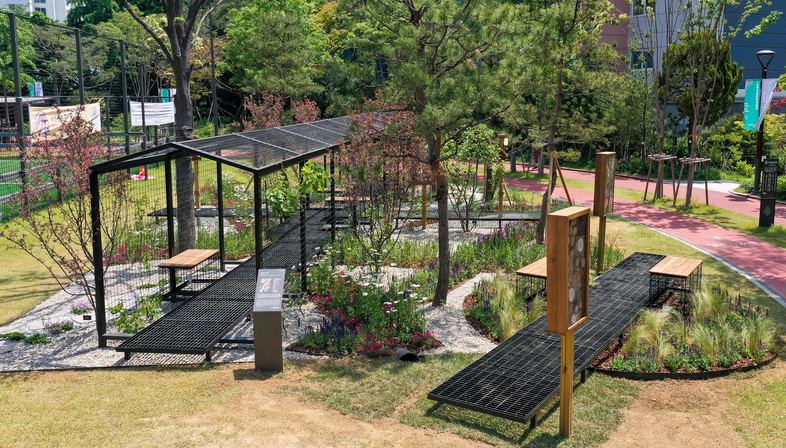 Seoul Metropolitan Government (SMG) hosted the Seoul International Garden Show (SIGS) May 14 through 20 at Malli-dong Plaza, Son Keechung Sports Park and Jungnim-dong: an initiative promoting Seoul as a green city and contributing to the development of the garden industry and revitalisation of the local economy. The green revolution in Seoul was evident in MVRDV’s Skygarden Seoullo 7017 project for conversion of a viaduct on an urban freeway to create a park 983 metres long.
Seoul International Garden Show (SIGS), first held in 2015, is an annual event which was originally scheduled for last October but postponed due to the pandemic, offering the people of Seoul a beautiful opportunity to experience urban greenery. The 58 gardens in the exhibition include some created on invitation by world-famous professionals such as landscape architect Martha Schwartz, but also show gardens selected through an international competition held in 2020. One of these gardens is Empathy Park by studio audal, under the direction of French architect and engineer Quentin Aubry and Dutch landscape architect Zeger Dalenberg, already familiar to our readers for their 2019 participation in the famous International Garden Festival in Chaumont-sur-Loire, France.
The theme of the Seoul International Garden Show was "Link Garden, Think Life", with the primary goal of using gardens to link disconnected urban spaces and improving citizens’ quality of life with greenery. Studio audial responded with the Empathy Park project, an urban microcosmos based on the concept of empathy.
Revealing local ties in a city, Empathy Park is a prototype urban toolbox taking all users into consideration. This means not only human beings, but insects, essential for biodiversity, birds and small mammals, as well as people of all ages, all of whom are given the same consideration. This idea translates into implementation of a common area, a garden, where all these users and their ways of moving about the space deserve the same attention. Some fly, some walk, some need nectar while others harvest fruit and yet others seek shelter.
This is why Empathy Park has room for everyone, offering attractive elements for creating places for meeting and interaction. The various portions of the garden are developed on the basis of the necessary features, for example using flowers selected to attract pollinating insects and “insect hotels”. Small mammals will find underpasses and fruit-bearing plants. The project integrates the trees already standing on the site and offers a variety of plants designed to be attractive year-round. Studio audal emphasises intersections, that is, points where the various elements intended for particular users come together, producing awareness where different users of the gardens meet.
The facilities for human beings include special walkways and a metal structure of archetypal shape offering an ideal selfie-point. Benches invite human visitors to sit down, observe the park and recognise the biodiversity that can be found even in the city, if we have an attitude of empathy toward other species. 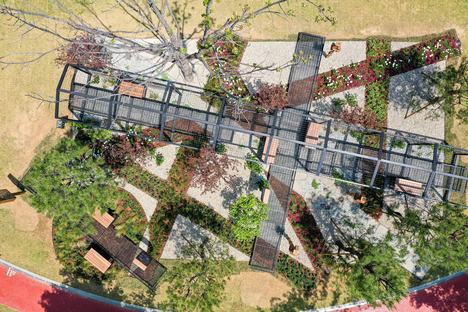 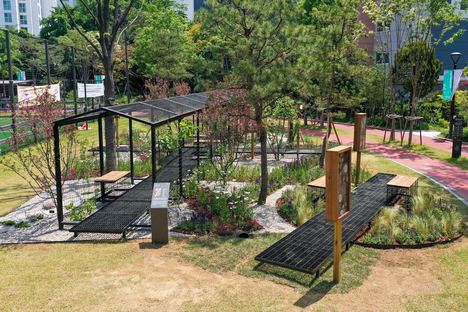 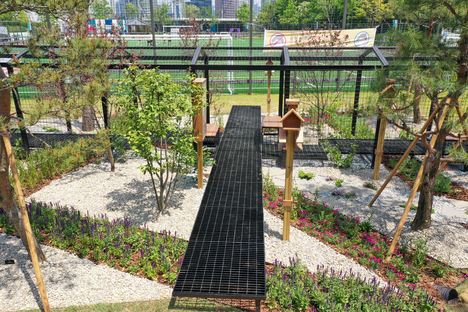 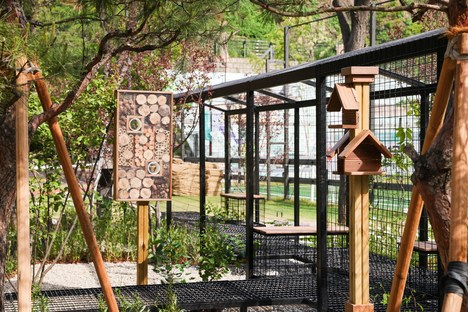 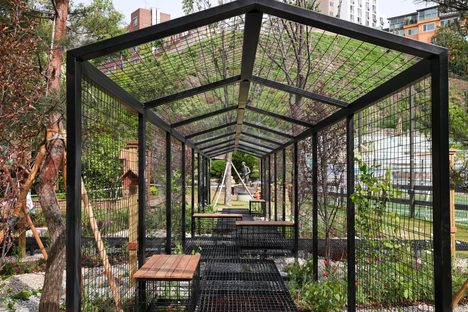 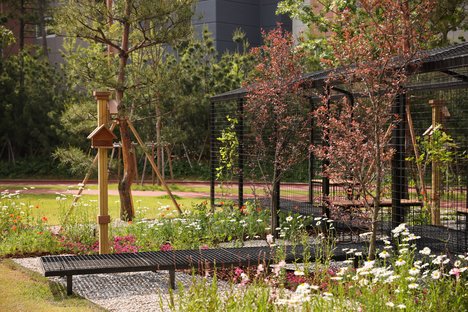 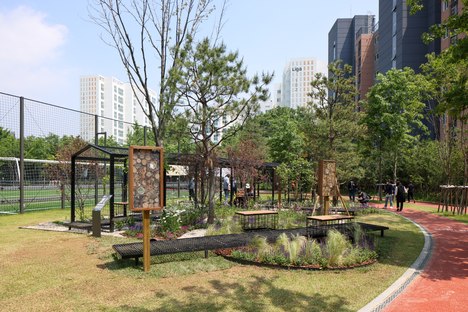 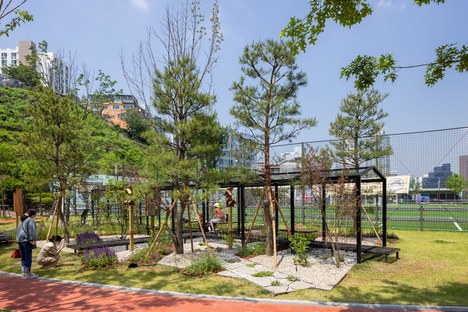 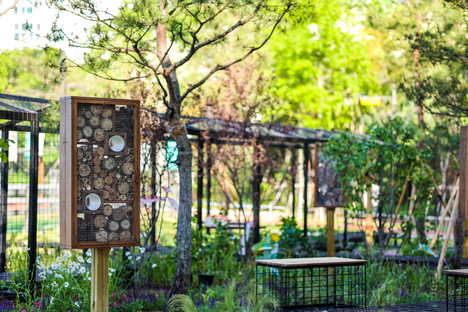 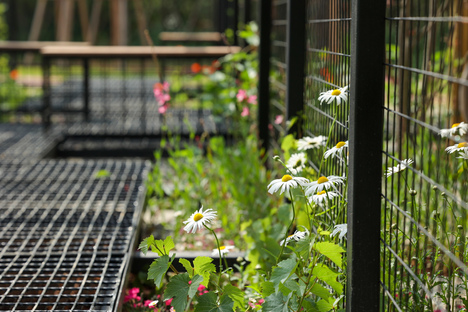 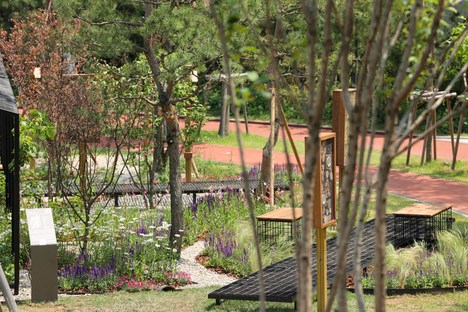 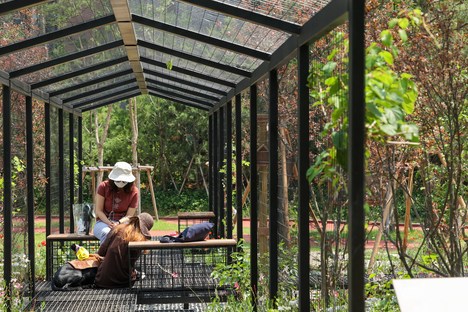 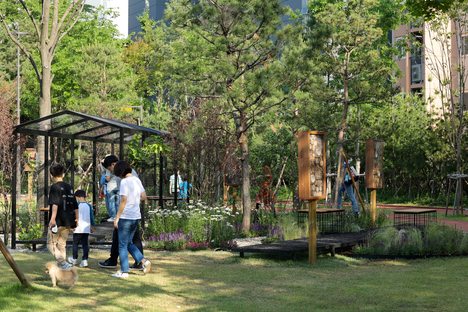 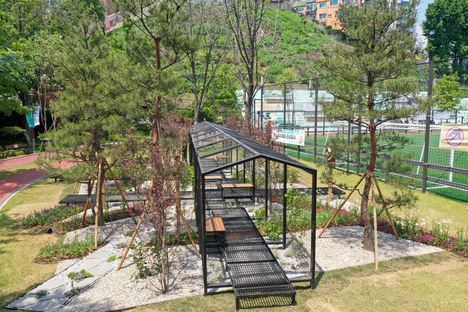