A place of sharing par excellence has become a digitalCHURCH. Thanks to the initiative by Norbert Herrmanns from Landmarken AG, together with the digitalHUB Association, the city of Aachen in Germany has its first co-working space in the nave of the former St. Elisabeth’s Church. A very appealing space that honours the Church’s original meaning as a gathering space for the digital community. 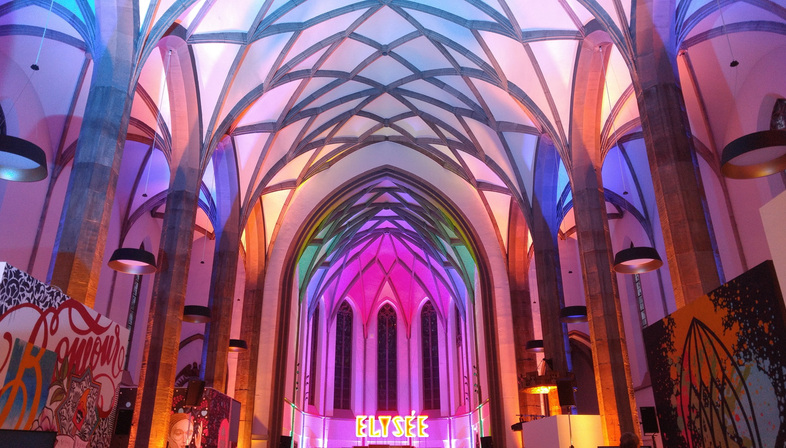 St. Elisabeth’s Church in Aachen's northern neighbourhood was built between 1904 and 1907 based on a design created by architect Eduard Endler in the neo-Gothic three-nave style, with an elaborate ashlar façade made of sandstone and Ettringen tuff blocks. In its formal language, the church is reminiscent of the late Gothic style of the mid-15th century and is a protected building as its openwork windows, partially shaped columns and splendid net vaulting are considered exemplary for the period. The tall bell tower is connected to the church on the north-east side, where the main door is also located, accentuated by a large openwork window with coloured glass that illuminates the gallery floor inside. To the south-east, St. Elizabeth’s Church finishes with a semicircular choir.
Since the beginning of the new millennium, in 2002, attempts have been made to implement other uses in the space of the church, considered too large. Horst Fischer, an Aachen-based architect, proposed new uses under the gallery and in the former chapel hall on the ground floor of the tower, without the need to significantly alter the structure of the original building and the spatial effect. Thanks to the addition of large glass windows in the existing round and pointed arch openings, a separation of the newly created rooms from the interior of the church was achieved, without interrupting the visual dialogue between the spaces. A meeting room was built occupying the width of the nave, while the addition of a services block completed the intervention.
A solid basis for the future of the church was thus established: in 2012, the parish in fact decided to sell the church building. A buyer was not found until 2016, the Aachen-based investor and board member of Landmarken AG, Norbert Hermanns.
From 2014 to 2015 St. Elisabeth was temporarily used as an exhibition and research space for children and young people for a local initiative. In April 2016, on the other hand, the church was deconsecrated and served for three months as the urban "Hotel Total" cultural hotel, a federally funded project that involved long-term unemployed people and refugees first in the renovation and then in the care of the hotel guests.
In 2017, the new life of the deconsecrated church began as the so-called "digital church": the new headquarters of the digitalHUB Aachen e.V., association committed to the digitisation of the economy and public sector in the Aachen region, which now has a co-working space at its disposal for start-ups, SMEs and industry, to help drive digitisation forward.
This new use of the church has guided the design of the interior spaces, with reversible installations that form enclosed workspaces between the nave’s supporting columns. Two long, narrow work desks cross the nave and can be used from both sides. Smaller individual desks with dividers on three sides are set up as additional mobile workspaces between equipment and longitudinally aligned tables. The key aspect is the absolute flexibility of the interventions. Additional workspaces or quiet areas can thus be added to the two side corridors as needed. Balanced lighting creates a pleasant working atmosphere and a sort of lounge with comfortable seating and a bar with a counter, instead of the altar, have also been included in the design. The area under the gallery, which had already been converted in 2007, has been retained and is used as a foyer, among other things.
Thanks to this collaboration between the Landmarken AG studio and digitalHUB, association that focuses on the multifunctional use of the church building as a shared space, the original meaning of a place for meetings and events, open to all and now enjoying a second life as the nucleus of North Aachen’s emerging district and digital ecosystem, has been fully honoured. 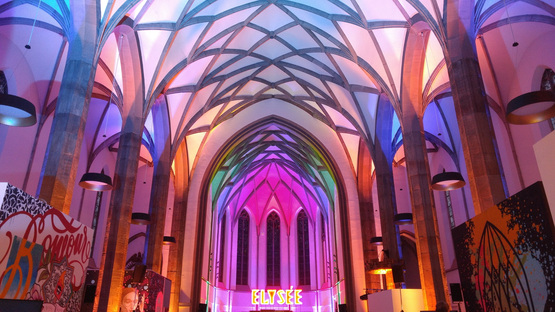 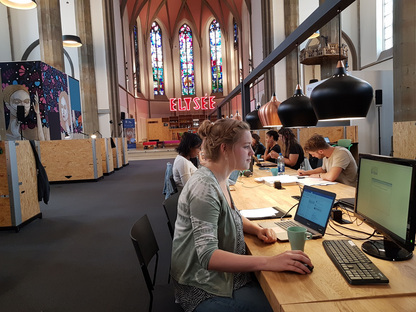 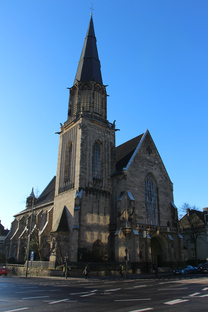 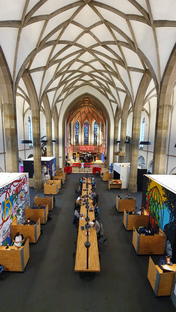 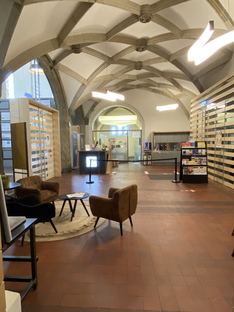 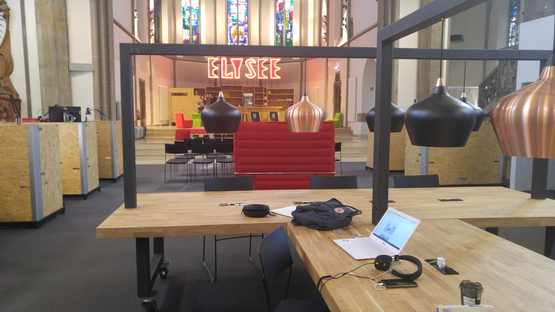 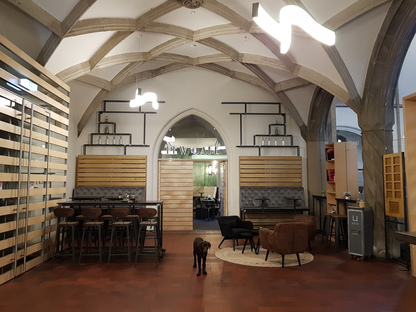 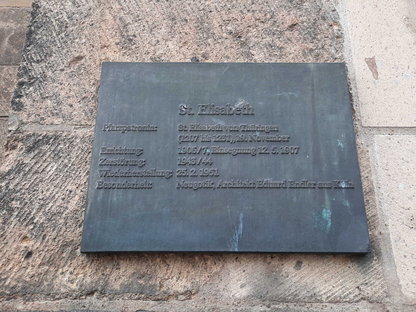