Dabbagh Architects, the studio led by principal architect and founder Sumaya Dabbagh, built a mosque dedicated to Mohamed Abdulkhaliq Gargash in Dubai, in the United Arab Emirates. The place of worship, convincing in form, material qualities and use of daylight, is one of the first mosques designed by a female architect in the United Arab Emirates. 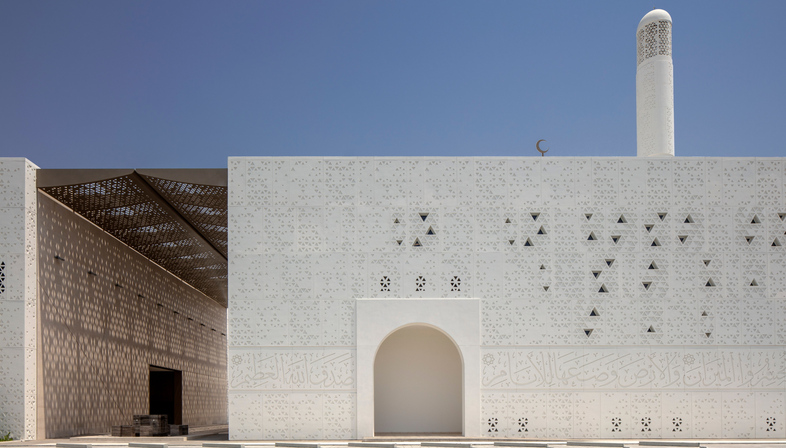 Building a place of worship is an important challenge in which architecture becomes an expression of faith. The challenge is even tougher for a woman architect, because, as we all know, even at the end of 2021 the world of architecture has a long way to go to achieve gender equality.
Sumaya Dabbagh, who founded her studio Dabbagh Architects in 2008, is one of only a few female Saudi architects in her generation, and one of a handful of women architects to run her own studio in the Gulf region. She has been awarded a number of prestigious acknowledgements for her works, often culturally important buildings which interact with their surroundings, such as Mleiha Archaeological Centre (2016), a curved sandstone structure rising out of the desert in the small town of Mleiha, a UNESCO World Heritage Site. The project won an Architecture MasterPrize (2020), among other awards, as well as being shortlisted for the Aga Khan Awards (2018).
Now Sumaya Dabbagh has completed a mosque in minimalist contemporary style in Al Quoz, the industrial heart of Dubaichea, Dubai, commissioned by the Gargash family as a gift to the community in honour of the late patriarch of the family, Mohamed Abdulkhaliq Gargash.
At the heart of the design approach is enhancement of the act of worship and the transitional journey through the building preparing worshippers for prayer and connection with the sacred. The architect’s skilful use of daylight illuminates the way of the faithful right from the entrance of the mosque, thanks to perforated elements creating a sort of threshold of light. As worshippers move forward, ritual acts such as ablutions and the removal of shoes are accompanied by constantly changing light conditions as an aid in preparation for prayer.
Sumaya explains: "Muslim prayer is performed throughout the day at prescribed timings: at dawn, midday, afternoon, sunset and at night. This discipline creates a human connection with the natural day and night rhythm. The experience created through the design of the mosque seeks to enhance this connection through a controlled introduction of natural lighting”. This is achieved through the perforated dome, indirectly behind the Mihrab, which is the niche indicating the direction of prayer, and thanks to a series of small openings in the façade based on the same decorative patterns as the interior.
These decisions are underlined by the architect’s reinterpretation of Islamic geometry and calligraphy, creating a solemn atmosphere in the mosque. Opting for a simplified version of the mosque, Sumaya has created an inner courtyard dividing the sacred and the functional parts of the building, and, in further contrast with traditional mosque architecture, designed the minaret as a separate volume.
The mosque’s intrinsic sustainability is expressed through use of local materials and labour: stone from Oman and concrete, aluminium, cladding, joinery and ceramics from the Arab Emirates. The result is a place of worship of great beauty and serenity which accompanies the faithful on an interior voyage toward spirituality. 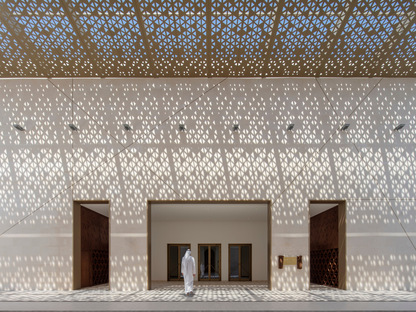 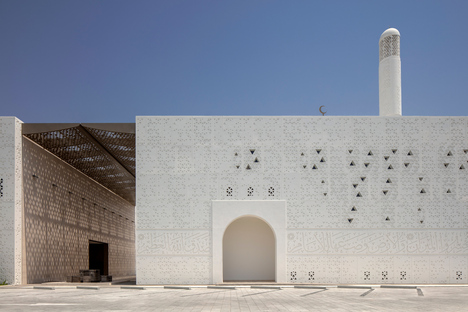 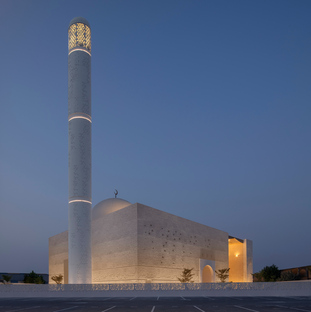 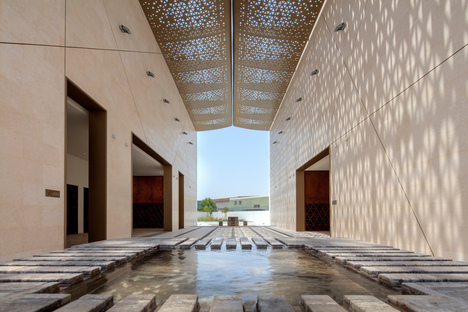 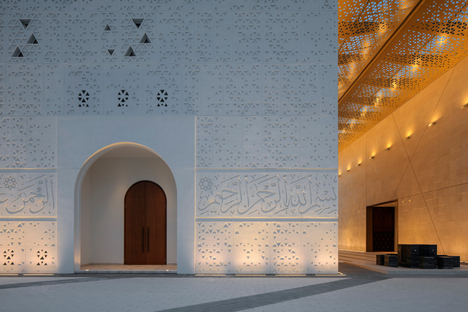 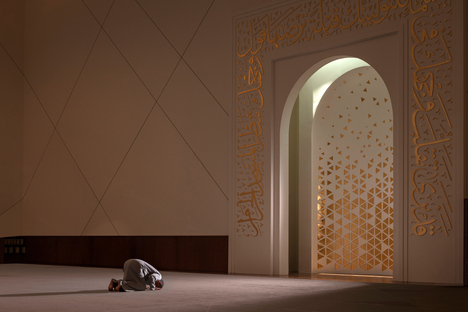 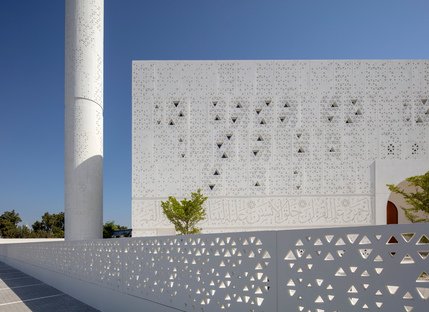 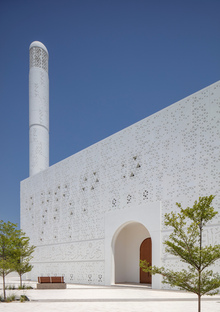 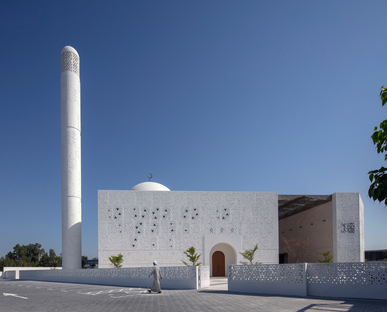 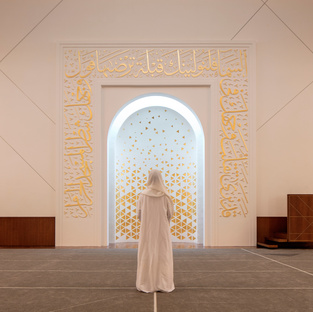