Hamburg-based architecture firm, blauraum designed the Hansaterrassen complex in the eastern zone of their city.

Hamburg-based architecture firm, blauraum designed the Hansaterrassen complex in the eastern zone of their city. This residential building project is an elegant response to the former industrial area.

An unusual position in the eastern part of Hamburg, featuring lots of canals and close to the city centre, together with the demand for affordable housing, has driven the local government to approve the redevelopment of retail land as residential lots.

So this has led to the transformation of a Hamburg suburb from a retail and industrial zone into a residential neighbourhood, as testified by the historical Hansaburg building constructed between 1913-1915 as a paper-mill, and now a heritage site.

The Hansaterrassen complex was designed by blauraum, the architecture firm known to our readers as the team behind the new FAB ARCHITECTURAL BUREAU BERLIN – architecture space (link) showroom and creative gallery - and despite its position right on Rückerskanal, it doesn't restrict pedestrian traffic. The project is structured as a number of volumes to give all the units canal views and to create a central shared space for the residents, focusing in particular on children.

The white facades are enhanced by balconies, whose metal railings reference a CR-Code ornamental pattern, setting up a lovely contrast with the neighbouring clinker brink buildings.
A redevelopment project that stands out due to its attention to the historical setting, recreating an urban unity with the old buildings and setting up a visually impacting sight without falling into the trap of just trying to stand out from the crowd. 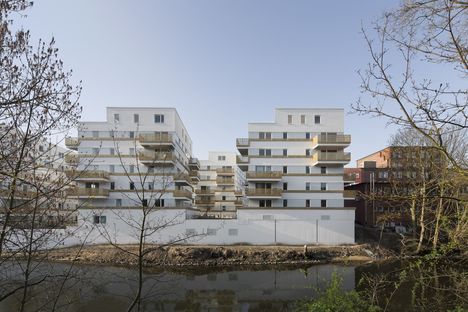 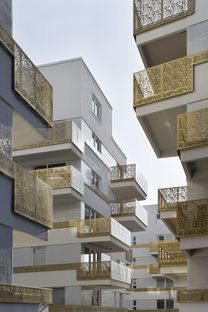 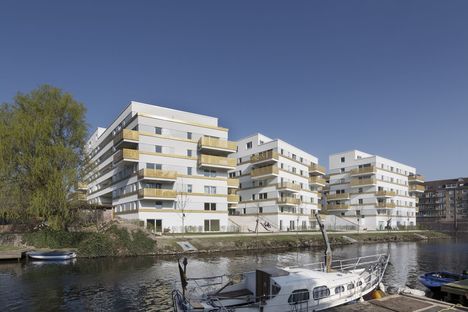 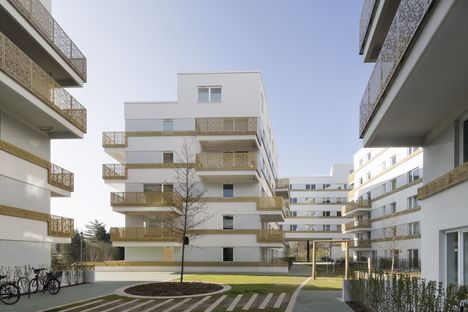