One of the recipients of the AIA’s 2019 Institute Honor Awards for Architecture is Starter Home* No.

One of the recipients of the AIA’s 2019 Institute Honor Awards for Architecture is Starter Home* No. 4-15, Saint Thomas/Ninth by New Orleans-based firm OJT (Office of Jonathan Tate) and located in that city. A residential condominium that uses accessible housing to respond to the desire to maximise residential density in the urban fabric.


Starter Home* is an initiative of the architect Jonathan Tate, delivering entry-level homes in historic urban neighbourhoods that are quickly gentrifying. According to Jonathan Tate, each urban area has its own idiosyncratic, underutilised or completely ignored lot types of zoning designations that escape normative planning efforts and development models because they don't respond to the minimum requirements of the various masterplans. Simply identifying underutilised land in cities is a process that has to be treated on a case-by-case basis, and involves an analysis of the relative potential after which it is possible to draw a map of these nonconforming lots. Once these details are pinpointed, it is possible to go to the planning stage, based on the offer of a Starter Home*, that entry into the housing market and broader economy for consumers based on affordable ownership.
From here, OJT developed a series of design interventions on these nonconforming lots to maximise residential density without being forced to build vertically in towers.
The project Starter Home* No. 4-15, Saint Thomas/Ninth di Jonathan Tate is the third one of these series and levels the playing field for homebuyers in the Irish Channel neighbourhood of New Orleans by adapting to the difficult, irregular fabric found there: a mix of industry and low-density residential where it’s not uncommon to find warehouses and homes on the same block. The context of intimacy between these odd neighbours was critical for the team when it added 12 homes—10 single-family and one two-family—through the reuse of an existing warehouse and by building on an adjacent vacant lot. Embracing the unappreciated warehouse form was the basis for the team’s exploration of the site, and the gradual roof pitch across the development furthers the neighbourhood’s industrial language.
The individual living units have been configured onto the existing parcels of land like a multi-building condo, where the architects went with tall, skinny dwellings packed close together, instead of long, flat ones. To further minimise the use of public land for parking, OJT gave each house one parking space by setting back the ground floor of each home to free up some of the land. Due to the revised legal boundaries on the site, the spaces between buildings have become implied side yards. Those spaces are used as if they were front porches, instilling a greater sense of entry and ownership.
Jonathan Tate's idea to favour new opportunities in the property market and for high-density urban development also convinced the jury of the AIA’s 2019 Institute Honor Awards for Architecture that made Starter Home* No. 4-15, Saint Thomas/Ninth by OJT one of the nine recipients of one of the highest honours for architecture in the United States. 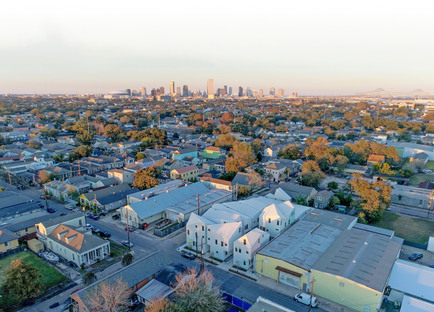 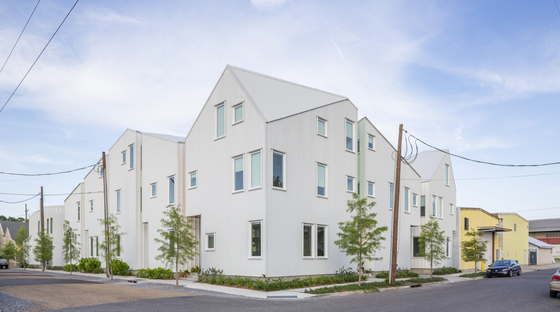 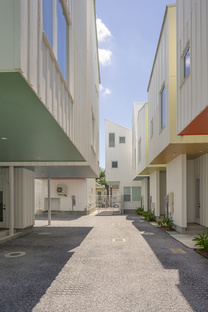