A sauna on the rooftops of Geneva. Bureau A.

What to do with the extra space on an old factory rooftop? Build a small multipurpose sauna, of course! This is the response of Daniel Zamarbide and Leopold Banchini, the architects from the Swiss practice Bureau A who came up with the project. The Kugler factory was built in 1863 to manufacture valves and taps and is located on the banks of the Rhone in Geneva, Switzerland.

After production was transferred, the old factory was redeveloped and converted for a new use, through “Fédération des artistes de Kugler” (FAK): 130 arts and crafts people formed an association to manage the multipurpose areas created inside the industrial estate.

A special touch in the scope of this conversion sits on the building’s rooftop, where the architects from Bureau A, Daniel Zamarbide and Leopold Banchini, both extremely active in the field of architectural experimentation and research, built a sauna in collaboration with artist Jérémie Gindre and L-Sud association.

But this isn’t just any old sauna – it’s a small timber hut that holds everything needed for a sauna and that can also be used as a small studio or getaway. A small, multipurpose space, like a nest on the roof.

A concrete example of creativity applied as part of a redevelopment and conversion plan; added value with a view over the old factory’s sloping rooftops and the city of Geneva. 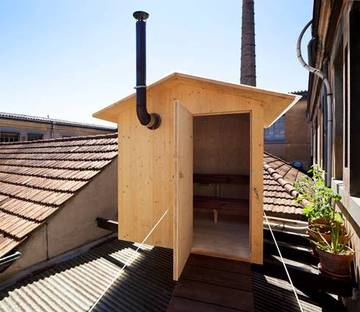