The Library Home, as the architects of Atelier Branco call it, is an experiment in living developed in response to the client’s precise requirements in the midst of the thick "Mata Atlantica” forest in Vinhedo, in the state of São Paulo, Brazil. The library home is a house in which to read and think. 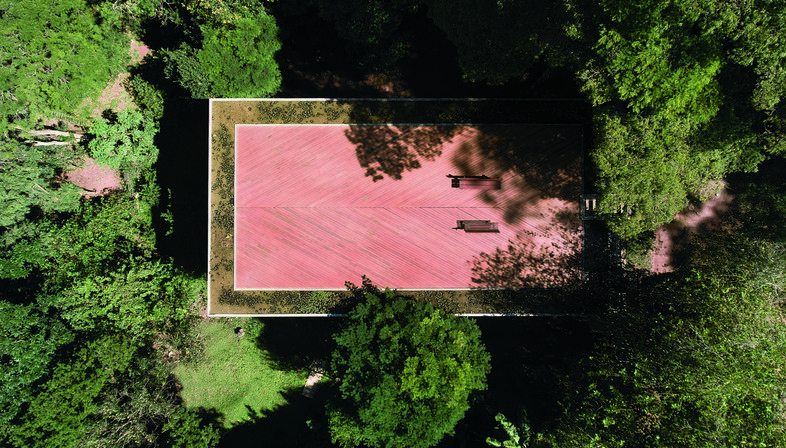 Matteo Arnone and Pep Pons of Atelier Branco Arquitetura designed the Library House in Vinhedo, in the Brazilian state of São Paulo. The architects note that their client was an activist against Brazil’s military dictatorship in his youth and is now a renowned scholar of the history of political thought, who has taught in the state university in São Paulo since the ’80s. He wished to build his ideal home in nearby Vinhedo, and the architects say that what he had in mind was not really a home but a refuge, a space of his own which would above all be a place for reading and thinking.
Renaissance nobles commissioned the construction of suburban villas where they could withdraw from all the troubles of political life, receive illustrious guests and spend time contemplating nature and studying, such as Palazzo Te in Mantua. Five hundred years later, life and society are quite different, but the Library House reveals the client’s clear intention of creating an unconventional living space where he could cultivate his own personality. Matteo Arnone and Pep Pons interpret this requirement with a house immersed in the forest, to the point that it almost sinks into the slope of the land on which it stands; a house in which the layout of space is not merely functional for its purpose but offers a synthesis, a sort of ideal model, for study for a person who loves reading. The architects have designed not merely a house for someone who loves reading, but a house for reading.
The lot measuring over 5000 square metres is located on a hillside in a clearing in the dense forest of the Mata Atlantica, and the architects took advantage of the slope to construct a single space on three levels which practically disappears from view from the street that passes by the top of the house. Seen from the street, the house looks like a monumental concrete platform, 20 metres long and 10 metres wide but only 15 centimetres thick, jutting out over the void. This magnificent panoramic terrace (formally clean, without any railings, as it is surrounded by a pool of water one metre wide) is actually the roof of the house, supported by eight simple, slender pillars. The big single space created below it, with floor-to-ceiling windows on three sides, iron frames and a refined decorative composition, recalls greenhouses or pavilions in city parks. The symbiosis with vegetation is complete, and by indirectly entering human space, nature isolates it, shelters it from the sun and other elements, helping create a primeval refuge for reading.
This single space is divided over three levels, three terraces open onto the void offering a new perspective on the forest and transforming the house into an amphitheatre. From the top of the hill, we descend into the interior of the home via a narrow concrete staircase, which marks the main axis of the home, continuing as far as its opposite end, where a glass door leads into the garden. Outside, the path continues along the side of the house, rising up to its top and closing off the perimeter of the building. The perfect rectangle of the floor plan is divided over three equal levels by eight pillars set 5.5 metres apart, mirroring the axis of the staircase. The height of the floors varies, from the lowest one near the entrance, measuring 2.5 metres and containing a cosy bedroom on each side, to the central space containing the study and reading area, to the biggest space, the kitchen and living room, more than 5 metres high. On the cross axis on the second level, two doors offer additional access to the outdoors. The living areas enjoy plenty of indirect light, considering the northern-facing lot and the presence of the trees around the house.
The roof platform is grafted onto the land at the top of the hill by a concrete volume, cast on site like all the other structures, but completely shut-off, with no windows other than skylights. The bathrooms are recessed into this side, while the kitchen furnishings and storage cabinets in the open space are also concealed in the concrete walls, without affecting the even geometry of the floor plan.
The materials used are traditional in Brazilian architecture: bare concrete, wooden floors (like the long planks of Garapeira wood on the rooftop patio) and fine iron frames, reflecting all the attention to detail and praise of proportion of Modernism. 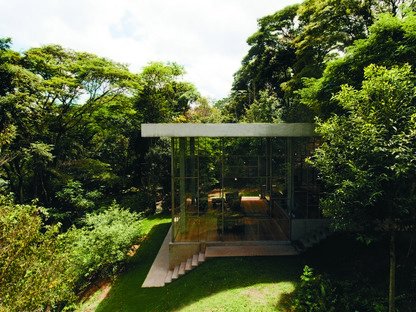 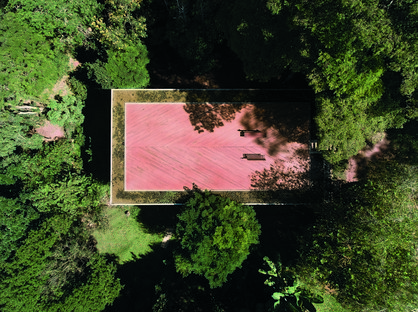 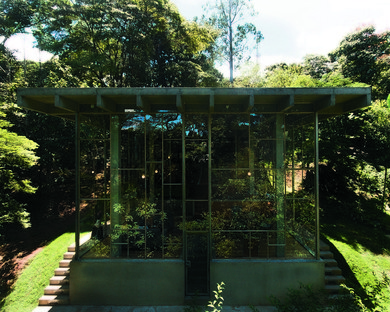 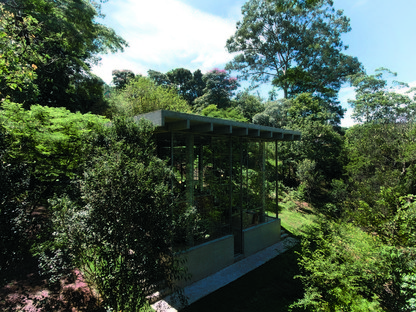 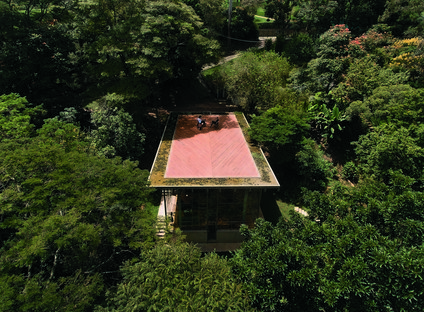 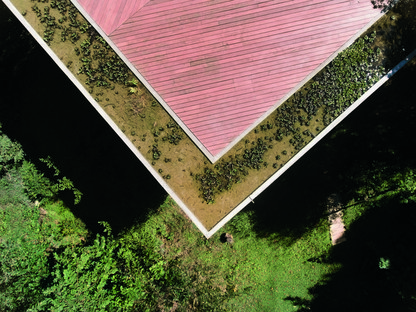 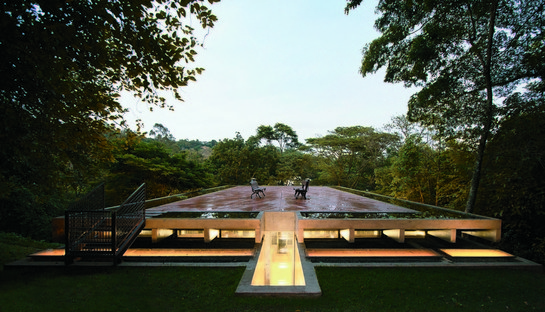 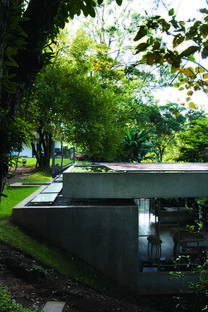 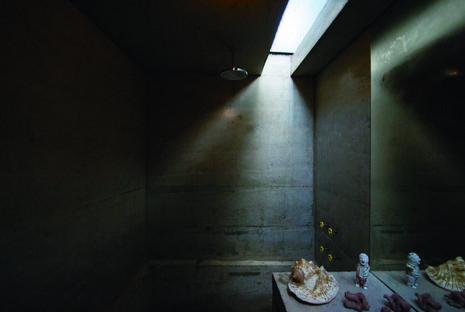 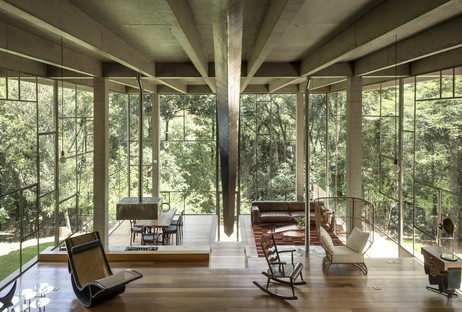 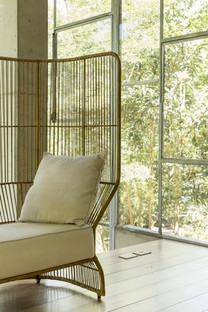 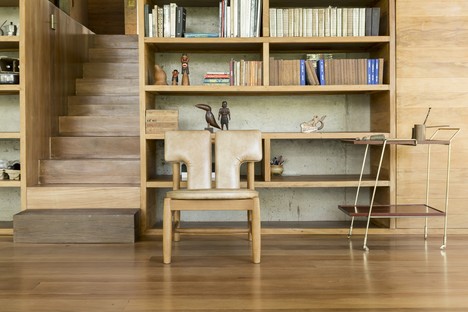 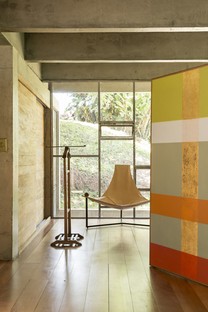 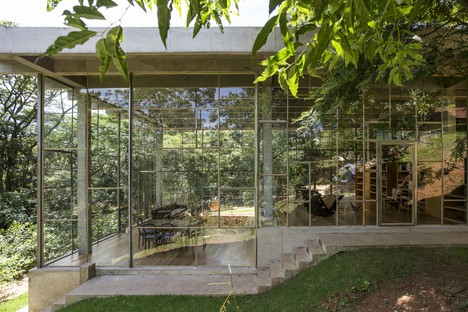 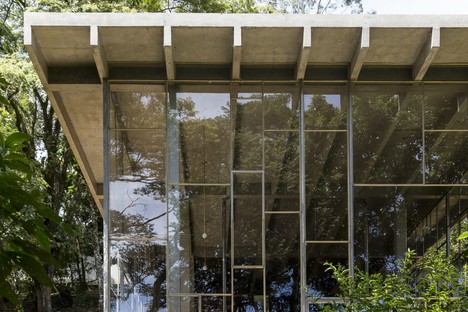 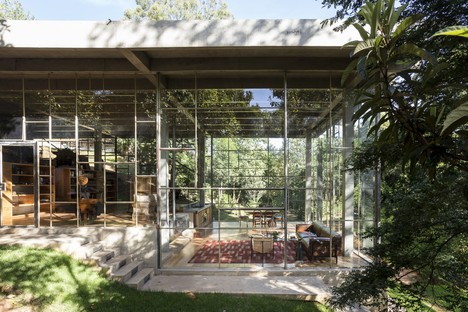 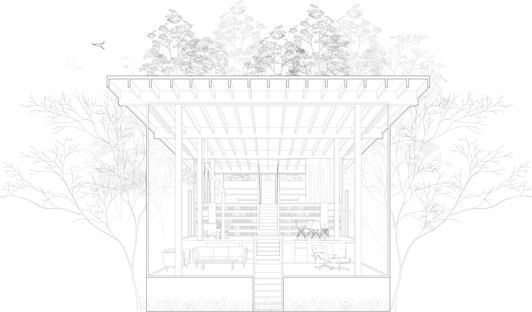 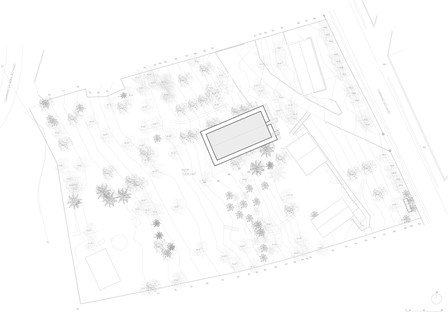 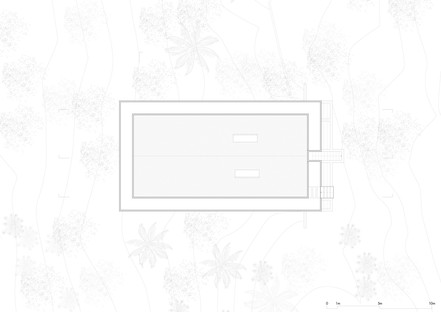 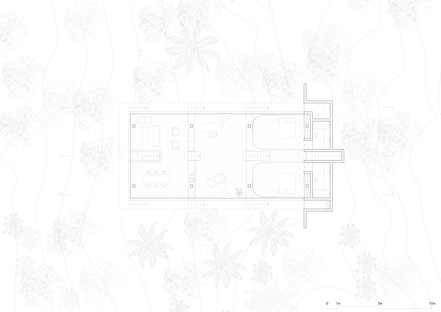 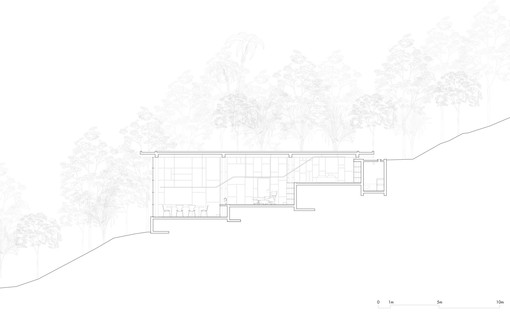 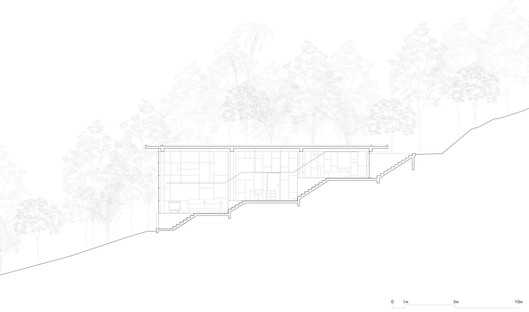 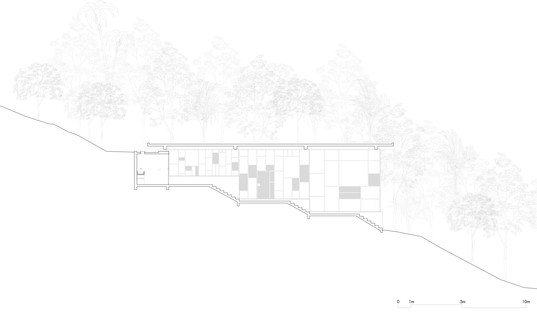 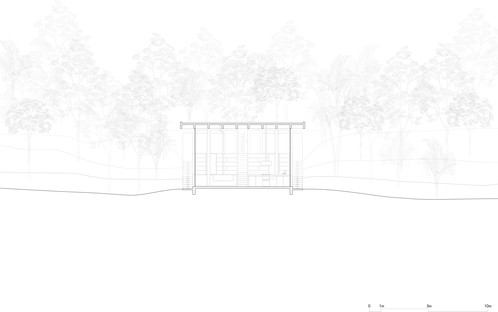