Guest of this appointment is Jay Valgora, founder and principal of the Manhattan-based STUDIO V Architecture. He is an architect passionately dedicated to preserve and revitalise the relevant narrative of an heritage at risk of disappearing with particular interest for former abandoned industrial districts. Received a Bachelor of Architecture degree from Cornell University and a Master of Architecture degree from Harvard he was a founding member and Design Director of Rockwell Group and Design Principal at Walker Group, until he decided to start his own practice in 2006. The firm embraces multiple services from master plans, to commercial and residential. Their projects have received important recognitions, as AIA awards, International Design Award, Architizer A+ Awards, Architectural Record Award, being featured in prestigious publications including The New York Times, Architectural Record, Dwell, Wall Street Journal, New York Magazine, Crain’s New York, and Architect’s Newspaper.
The conversation starts focusing on the circumstances that led a child, grown up in Buffalo, former industrial New York City’s waterfront site, where the father was working in the steel mills, to the great fascination for a large collection of gigantic, iconic grain elevators until conceiving ‘Silo City’, a vision and proposal of an impressive adaptive reuse intending to link the silos and re-connect a community, winner of Future Project of the Year 2021 at World Architecture Festival. Another project polarizes the discussion: the really beautiful and meaningful rehabilitation of seven adjoining red brick former coffee warehouses, the Empire Stores, left languishing for over half a century along the Brooklyn waterfront, transformed into a dynamic community hub, successfully combining old and new and strategically reconnecting community and waterfront.
Several important considerations are exchanged about 10 abandoned oil tanks along the East River in Brooklyn, which have been subject of a contention lasting years between Studio V, supported by many other environmentalists, landscape architects, scientists, activists and artists, intending to keep and adapt the majestic, luring industrial structures into a public park and the divergent position of those who didn’t want to maintain them. Digital design constitutes another aspect explored by the practice to reach experimental structural solutions, like the facade of a Casino, former historical Yonkers 'Hilltop Racetrack'. The conversation concludes with a truly important and captivating message Valgora divulges, talking about ‘Last Utopia’, a book he will publish soon. He speaks of the necessity to find again optimism and the indispensable new role that architects are expected to play in a time of great anxiety and uncertainty. 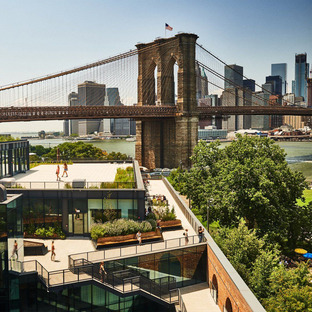