Guest of the appointment is a prominent figure in the Columbian architectural scenario, Giancarlo Mazzanti, who has dedicated part of his professional life to confer a new identity, a quality environment, and social welfare to poor, unprivileged areas of his country, demonstrating that architecture can offer effective opportunities for a social redemption. Graduated from the Universidad Javeriana de Bogotá, he completed his postgraduate studies in architectural history, theory, and industrial design at the University of Florence in Italy, founding shortly afterward his practice, El Equipo de Mazzanti, in the city of Bogotá.
He realized very young the famous ‘Spain Library’ in the city of Medellin, followed by a wide range of projects from schools, libraries, sports facilities, museums, masterplans and installations, that have gained wide national and international recognition.
Awarded many times first prize and honorable mention in occasion of the most renowned Biennals, from the Venice Architecture Biennal to the Colombian, the Ibero-American and the Pan-american, he has won among other important recognitions, the Locus Foundation’s Global Award for Sustainable Architecture, Paris, and has the honor to have his works included in the permanent collections of the Museum of Modern Art,  MoMA, in New York, the Museum Georges Pompidou in Paris, and the Carnegie Museum of Art, CMOA, in Pittsburgh.
He believes in an architecture as action and, as an authentic activator and mediator, proposes multi-program public spaces that stimulate and foster relationships and interactions.
The conversation starts from that architecture of social value that has always seen him involved in the attempt to mend situations of severe inequality and marginalization, trying to understand how he had the chance to play a relevant role with his interventions in a difficult country like Columbia, for long time dominated by the violence of drug-wars and a diffuse, extreme poverty. We speak then about one of his first works, the simple but extremely iconic and brilliant gesture that characterizes the Spain Library, an architectural act considered by Mazzanti of real value, because not limited only to one function but embodying, as a hub of new opportunities, the potentiality to multiply public uses according to the needs of the poor neighborhood.
The intriguing synergy between the topography of the terrain and the organization of his works is another fundamental part of an architecture that, above suggesting familiar presences, aspires to grow organically with the context. The famous Four Sport Scenarios, a fusion of poetry and great flexibility, a porous public building conceived to host the 2010 South American Games, with the uninterrupted sequence of undulating profiles of its roof bands, coated in several shades of green, plays on the idea of a large green canopy, perfectly integrated with the surrounding mountainous landscape. Working on the modularity system of the bands has helped to envisage and propose an adaptability that, in consideration of the rapidly changing society we are experiencing, fits, almost with the same qualities of a tree, to new situations. A building able to expand and develop over time also without the author.
This operative strategy, finalised to deepen modules, aggregations of patterns, far from rigid functional programs, has been applied with prototype configurations to many elementary schools, as Timayui Kindergarten and 21, Atlantico Kindergarten, 21 different plots, in north of Colombia, in a region vulnerable to floods, responding to diverse topographical or programmatic requirements, with very limited budgets and timeframes.
Two other exemplar proposals, the attractive tree-like canopy, made of translucent polycarbonate dodecahedron modules, of Forest Hope, a small but particular significant sign able to provoke a multi-generational response in a depressed periphery of Bogota, lacking of basic, public infrastructures, and Pies Descalzos School, a more ambitious realization, conceived as a modular sequence of intersected hexagons, with patios, trees and public spaces, dominating from the top of a hill an equally harsh reality of a community living in miserable conditions, have both opened a dialogue with people, gaining their trust and confidence in effective, possible changes in their unfortunate existences.
According to an idea of architecture not as an object in itself but capable for using Mazzanti’s words, to “trigger behaviors and new dynamics, encouraging people to act in ways they will never think to act”, the fundamental approach of the practice to every project is the involvement of the community, in processes of co-creation, giving an effective voice to their hopes and expectations. The experience has significantly imprinted one project in particular, Marinilla Educational Park that, ensuring an authentic, vibrant interactive, social scenario based on encounters and exchanges, preserves a cultural identity.
Another important topic, how to encourage a de-contextualization of the traditional cold,
aseptic environment of healthcare centres, arises from a proposal of more than 10 years ago, suggesting a green and liveable atmosphere for healing experience, a vision
that has been later implemented for the refurbishment of the Fundación Santa Fe, a hospital in the centre of Bogotá,
The conversation concludes by touching the concept of ‘play’ and the relevant role it performs in all works as a contribution to a more human and creative architecture, far from rigid and controlled programmes of functional efficiency. 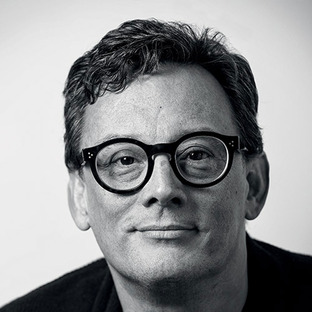 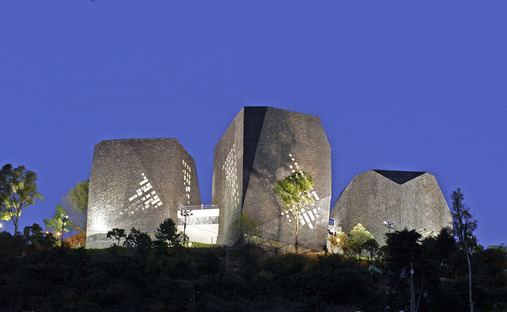 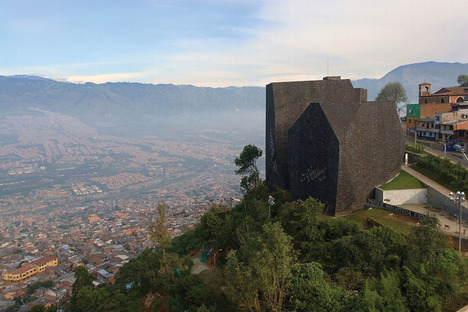 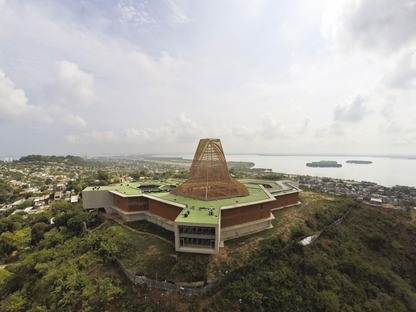 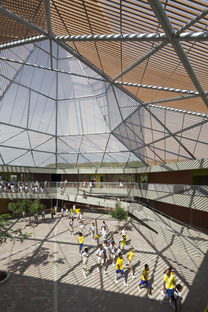 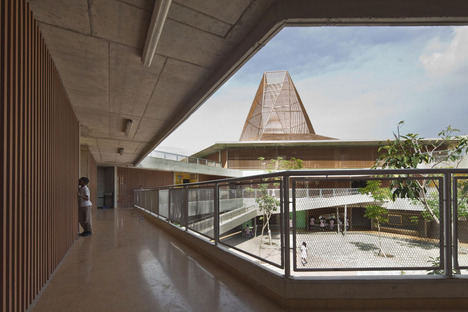 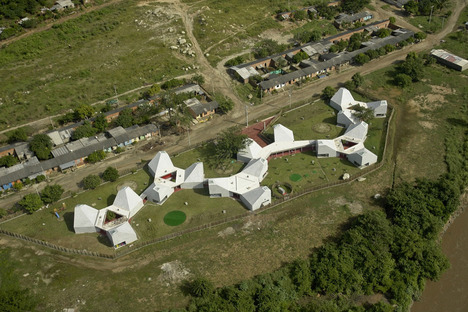 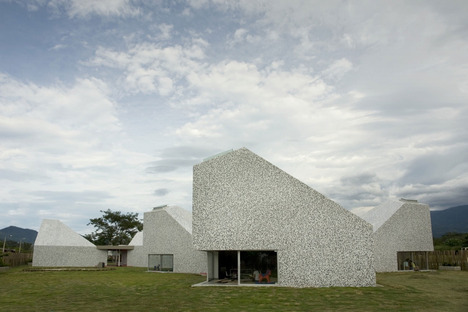 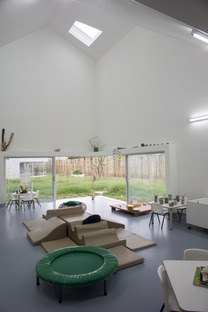 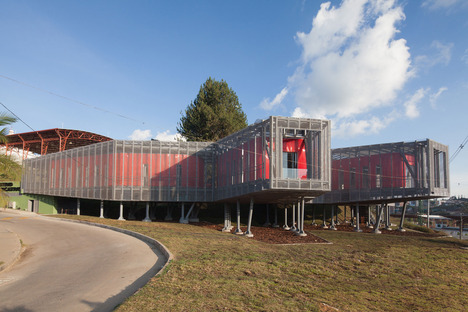 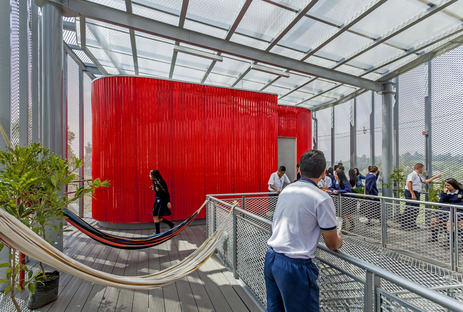 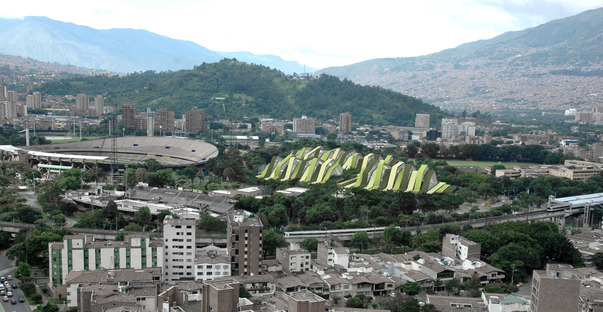 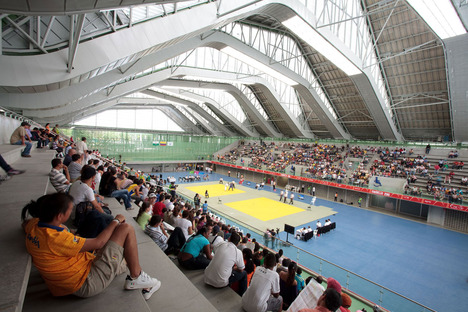 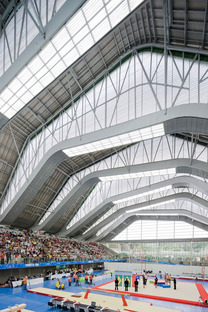 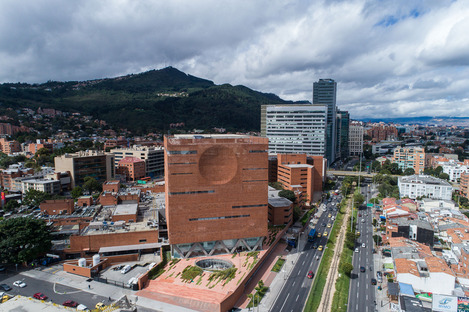 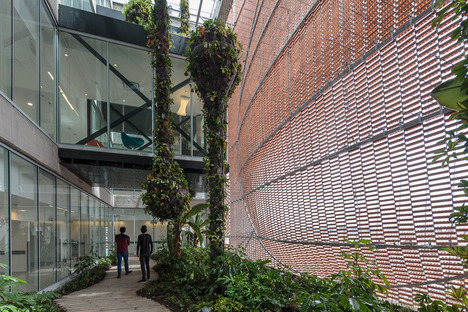 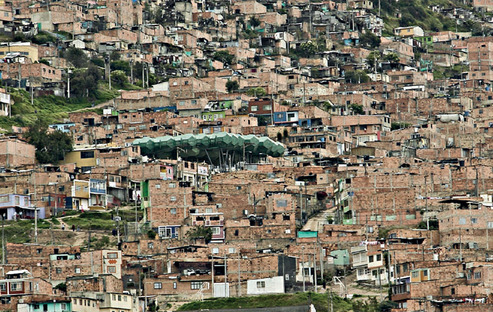 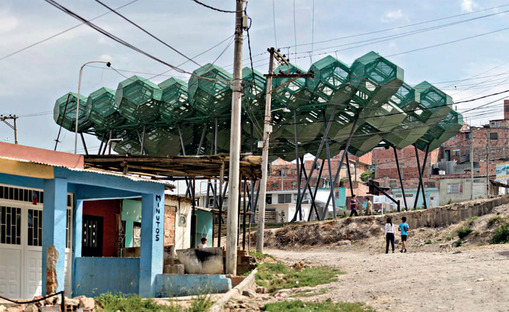 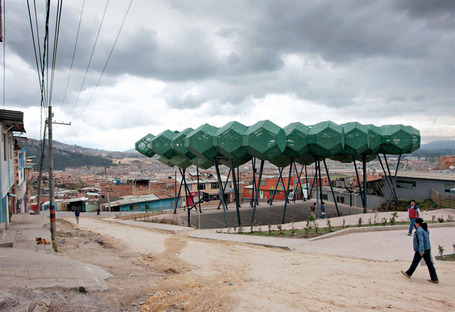