Alice Prin rest home by a+ Samuel Delmas in Paris

a+ Samuel Delmas has converted Broussais hospital south of Paris into a new rest home, Alice Prin. A number of hospital blocks with no particular architectural quality that had been added over the years were demolished to restore the original brick building, which a+ Samuel Delmas then completed with new volumes and a double skin of glass. 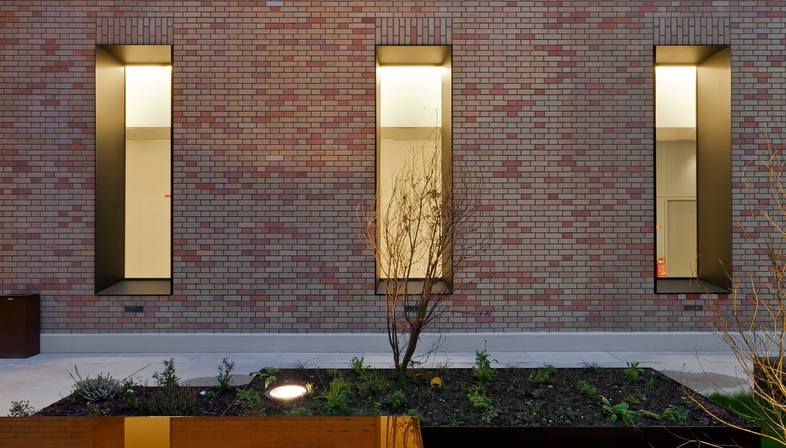 
In the 14th arrondissement, south of Paris, a+ Samuel Delmas converted the former Broussais hospital complex into Alice Prin rest home. The historic building, shaped like a comb with four teeth consisting of hospital pavilions, is a brick building which had in recent years suffered from the transformation of the suburb around it, with construction of tower blocks and glass and steel volumes of the type typically associated with modernity. The brick walls allowed the complex to maintain a strong identity of its own in this anonymous context, though over the years it had suffered from addition of extensions which did not suit its original character.
a+ Samuel Delmas’s project restores the original purity and simplicity of the volumes, knocking down the recent additions to the northeast and closing in the courtyards created between the teeth of the comb, now transformed into big patios: they limit guests’ view to make the rest home more private and block out the less attractive elements in its surroundings. New buildings in clear contrast with the original style of the building close in the southwest side, though their spatial continuity is maintained by matching the height of the previous pavilions so as to create a new single wall from which red gabled roofs rise. These structures, with their double glass skin, maintain the same vocabulary as the historic construction, such as the strip of white that raises them up and underlines the line of the ground and another that underlines the line of the roof, or the vertical rhythm of the façades, in which all the single windows on the historic pavilions become vertical floor-to-ceiling modules, transparent, frosted and etched.

The goal of creating an environment that promotes socialisation and prevents isolation is achieved thanks to new volumes with high ceilings and open spaces containing common areas such as the hall and dining rooms. They overlook the street so that residents have not only the intimacy of the patios but an opportunity to watch what is going on in the city outside and preserve a sense of the passage of time during the day.
In addition to the comb-shaped pavilions, a larger garden extends out to the north, to which residents are naturally guided by the layout of the home. Here the bright colours of the cor-ten cladding on the two volumes that complete the complex at the back dominate, in contrast with the concrete floor and the colour combinations of the vegetation.

The architects report that in defining the interior finishes, they stayed away from the classic image of the rest home and imagined the place as a hotel: white and grey paint, natural materials such as wood, stone and ceramic. The high ceilings of the historic pavilions were maintained and repeated in the 112 residents’ rooms, offering them a better place to live. 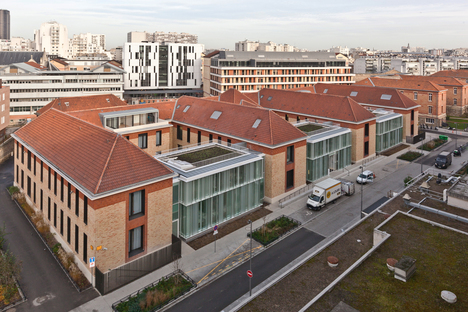 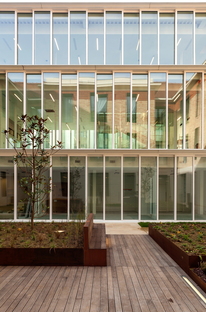 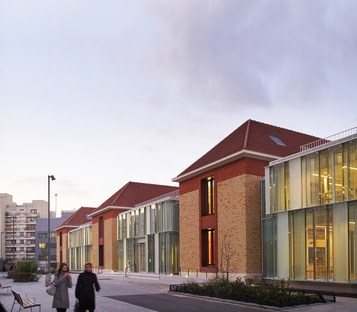 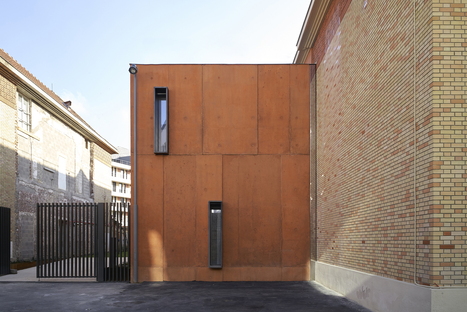 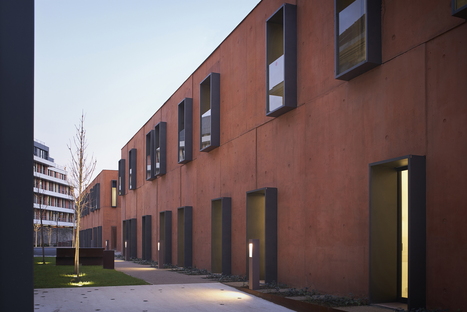 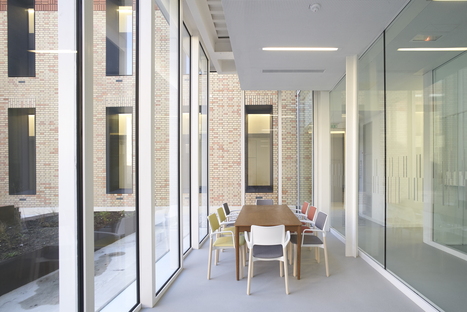 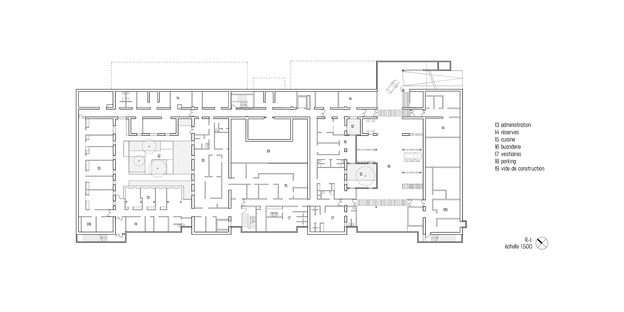