In the Saheb Bazar, in the heart of the city of Rajshshi, architect Shahriar Alam and his studio have designed a café that pays tribute to the cultural heritage of the place, one of the oldest and most historic cities in Bangladesh. 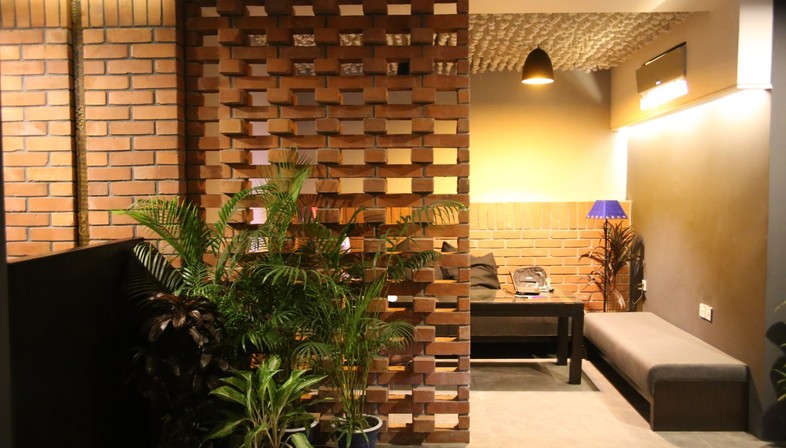 Flavour’s is the name of the café recently designed by architect Md. Shahriar Alam and his studio in Rajshahi, an important and ancient town in Bangladesh.
The city is located on the North bank of the River Padma, near the border between Bangladesh and India and, together with its outskirts, it makes up an extremely populous urban agglomeration of around 1 million inhabitants. Rajshahi was historically an important centre for the production and sale of silk and it still is today, as the city has a large number of silk businesses as well as food and wood industries. In modern dayBangladesh Rajshahi is an important administrative, commercial, cultural and educational centre. It is the headquarters of the most important educational and training institutions in the country, including the Varendra Research Museum, Bangladesh’s oldest museum, founded in 1910 and dedicated to ancient history and culture. 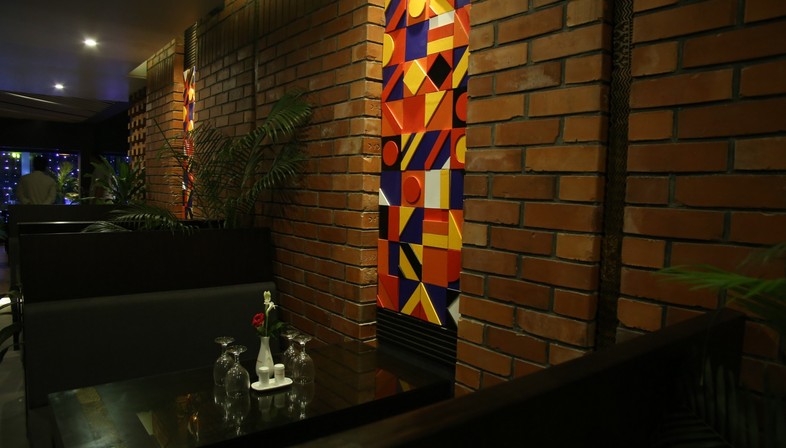 Inspired by the city’s cultural heritage, architect Md. Shahriar Alam and his team, made up of architects Md. Shahrier Hasan, Md. Ariful Islam and Mohammad Alamgir Kabir have designed the new Flavour’s café in theShabeb Bazar.
The Shaheb Bazar is the centre of the city’s cultural and commercial life and is home to some of the most important shopping centres and buildings, as well as cultural institutes like the aforementioned Varendra Research Museum. These historic buildings in brick and terracotta, the true essence and identity of the city, have inspired the architects to design a café intended to mediate between the historic value of the city and its new urban development.
Brick, a material very widely used throughout the country and present in nearby historic buildings, was the preferred material for the design, used in different textures to cover the perimeter walls and to build dividing walls. The walls create visual filters and divide the space available into areas with varying degrees of privacy. This division is also aided by the solutions adopted for the ceiling, which alternates flat dark areas with false ceilings made up of diagonal white elements in relief, by thick hanging ropes and furniture that symbolise an abstract sky, like in a family lounge. A range of solutions have also been adopted for the patterns of the perimeter walls, which are interrupted by decorative, vertical wooden stripes and larger strips that fit between the bricks like abstract terracotta portraits.These brightly coloured elements make the space dynamic and lively. 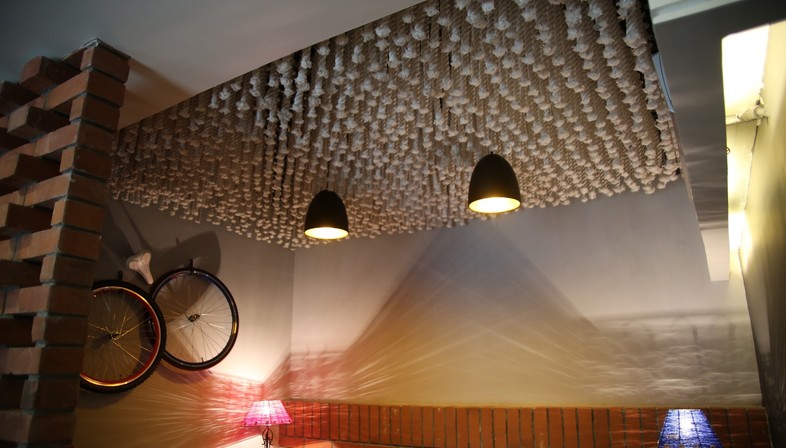 The various solutions adopted by the team led by architect Md. Shahriar Alam are aimed at developing a dialogue between the history of the city’s places and its new aspirations. The dialogue obviously employs the key words of architecture: materials and forms. The architects have chosen an ancient and symbolic material like brick, which recalls the historic, nearby buildings of the city, to create contemporary shapes. At the same time they have inserted elements in the interior design of the café created with modern materials and technologies. It is an important step that underlines how respect for what is ancient is not a stylistic exercise or a nostalgic re-evocation of a lost past, but the affirmation of a particular historic identity in an actual, modern context. 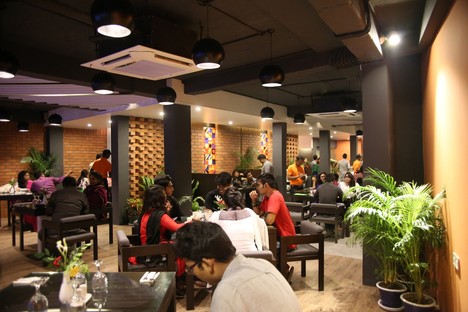 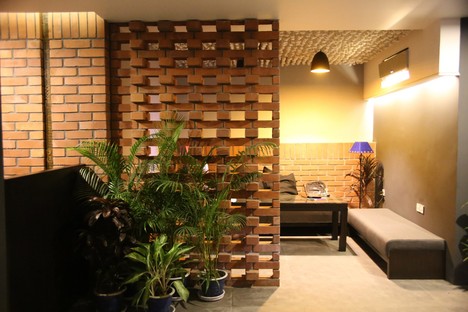 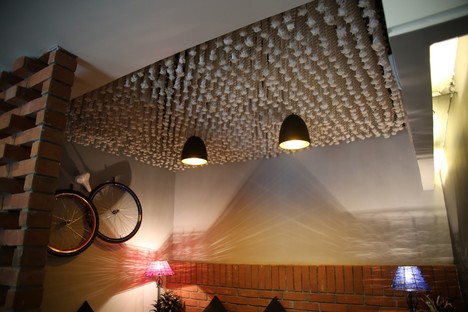 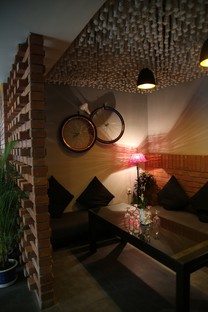 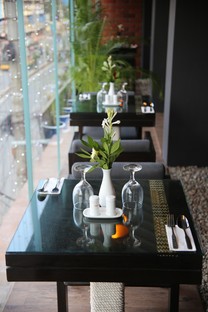 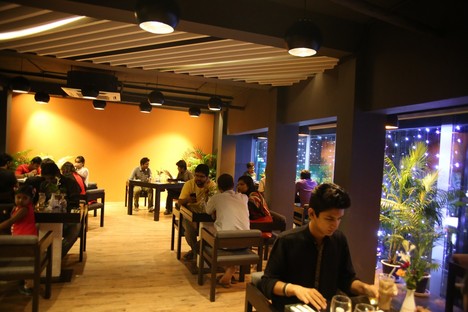 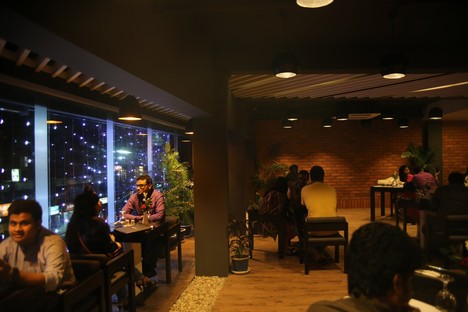 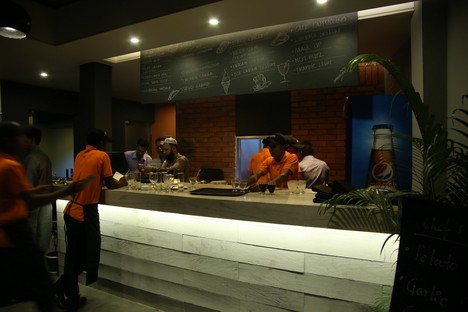 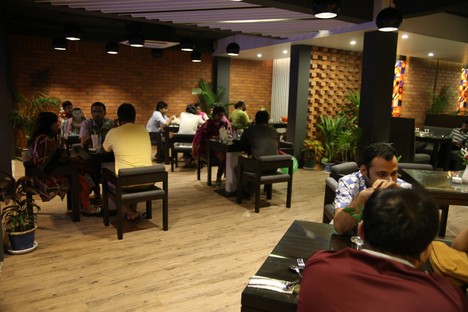 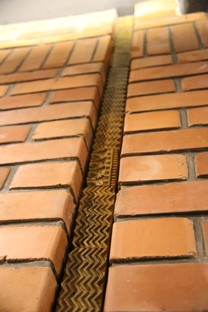 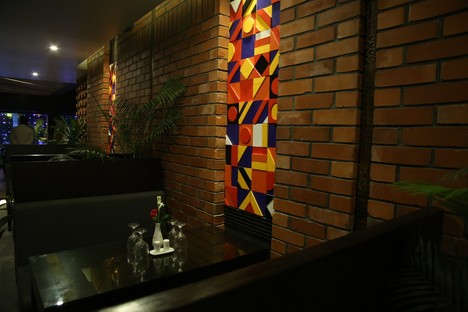