Hungarian architecture firm Naipur Architects has overseen a vast master plan drawn up for the town of Hatvan, designed in a chequerboard pattern with square lots occupied by public and private spaces, buildings, green areas, businesses, residential sites and cultural sites in an alternating pattern. The multifunctional sports and events hall, completed last year by Naipur Architects, is the first architecture of the master plan to be constructed. After having tested its functionality - with satisfactory results - architects Marcel Ferencz and György Détári, the two architects at Naipur heading up the project, now expect to continue with the implementation of the master plan, with a view to a more sustainable and innovative Hatvan. 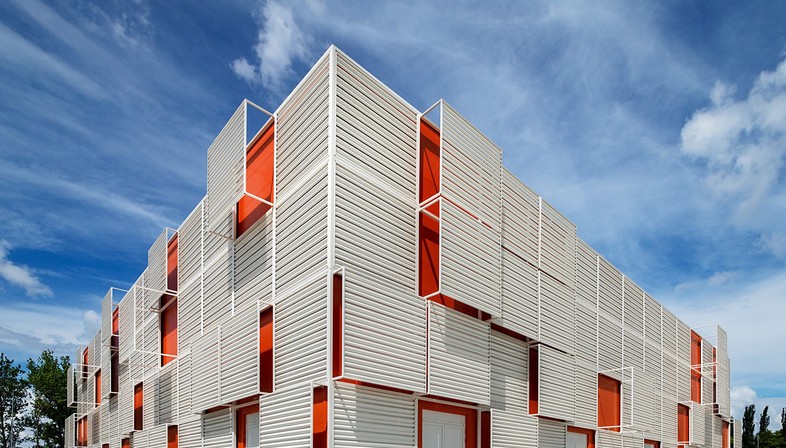 Naipur Architects is a Hungarian architecture firm which, in recent years, has focused its work on the town of Hatvan - in the northern county of Heves - which has a population of approximately twenty thousand. In 2012, the head of the entire region commissioned the firm to develop a master plan laying out the urban development of Hatvan for the next few years. The project was completed in 2016 and involved alternating green areas, public institutional and cultural buildings, businesses and residences according to a development plan with a rational, square layout based on a chequerboard.

The multifunctional sports and events hall, completed by Naipur Architects in 2020, is the first architecture of the master plan to be constructed. In keeping with the development plan and the future vision for the town, this hall takes the form of a vivid orange-red square structure covered with modular metal elements. Due to its conformation, the structure is brought to life by tension between its two sides: from one side, it appears to be a system of harmoniously assembled orthogonal lines, whereas from the other, the effect is that of a disjointed structure on the cusp of exploding due to internal impulses. As Marcel Ferencz and György Détári, principal architects in charge, describe the building: "Either solution we choose, the new Hatvan Handball Hall is standing in front of us as a moment captured during a course of a process. The concept of the building becomes clear if we read and interpret it in the space and timescale of the city."

What may momentarily seem to be an isolated structure with no place in the current urban fabric is, in actual fact, the first part of a coherent whole in progress, which the architects at Naipur hope to see completed in full. The Hatvan Multifunctional Sports and Events Hall is located halfway between two separate districts of the city, providing a link between them for the first time, and in doing so, establishing a convergence between the two built-up areas for the future.
With the building located in what was once an industrial area, the architects have sought to create a “dynamic still” capable of interacting with the centuries-old traditional structures already present, introducing a contemporary architectural dimension into the environment with a view to developing it in the future, with a particular focus on streamlining, functionality and economy.

The purpose of the building’s double façade is both aesthetic and functional, lending it a certain dynamism whilst also emphasising the entrances and providing thermal shielding and shade during the summer months. Naipur Architects were keen to wax lyrical about the design: “Its openings are following the functions, its construction and operation is simple and efficient. Its bright red colour is representing the fire of movement, energy of competitions and sport events. The secondary layer is serving as contrast, the network of hollow section frames. Their colour is white: the colour of perfection and possibilities, but it can be a reminder to pure, clean, and fair game. Their spatial dislocation can become particularly exciting when lit at night, the building is glowing through the slits of its armour, as the lava is glowing through the cracks of tectonic plates.”

Whilst the layout of the spaces is rigorously organised, the “playfulness” of the outer shell is echoed in the style of the interiors, which offsets the simple and austere character of the building itself. The false ceiling in the atrium, for example, takes the form of a repeating pattern of white, red, blue and luminous squares, intended as a tribute to Mondrian. Similarly, the metal outer shell sees the red of the underlying structure peek through. In addition, the bare mechanical fittings have been left visible between the colourful panels of the false ceiling,

The burning question for the architects is now a matter of the future of the town’s master plan: “will the masterplan be realised, or the sport venue will remain the only manifestation of the grandiose vision and the rearrangement of the environment will follow an alternative path?” Regardless of the fate of future developments - important though it may be - Naipur Architects say that they are proud of the work they have done. 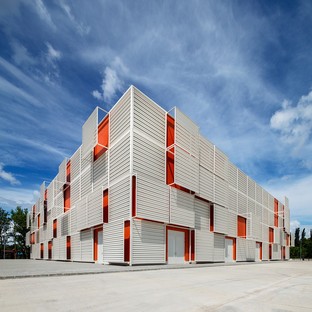 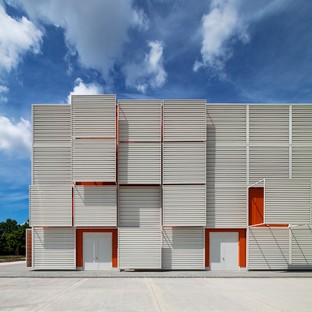 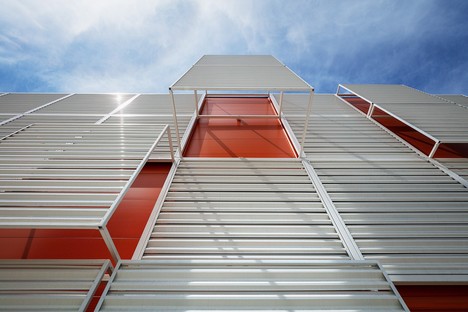 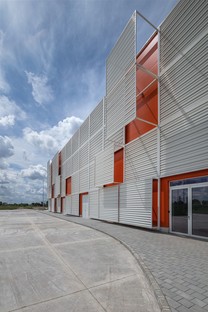 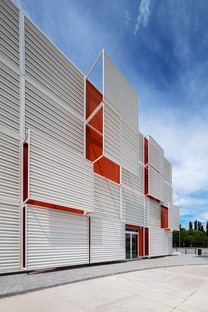 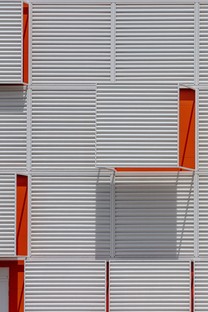 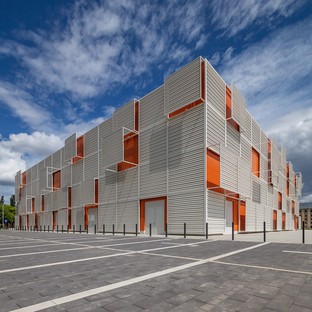 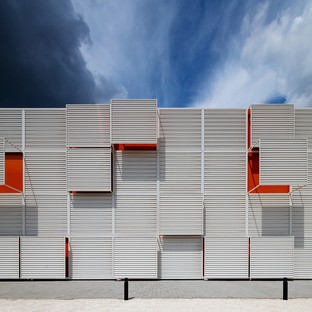 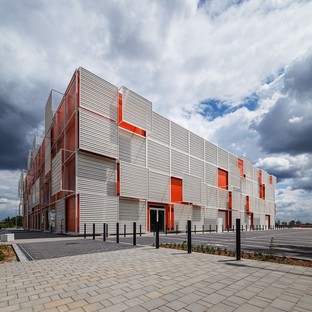 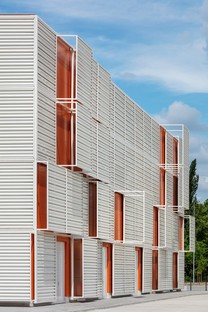 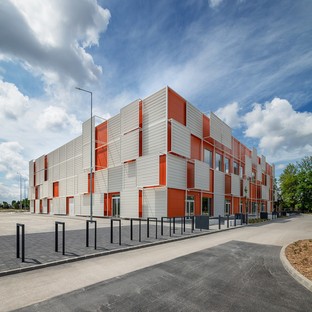 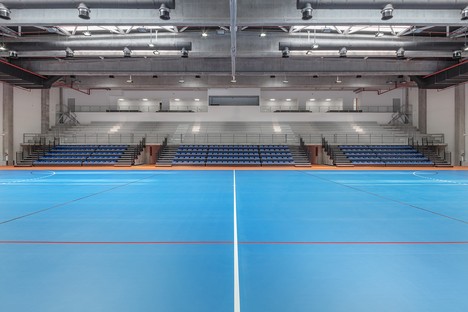 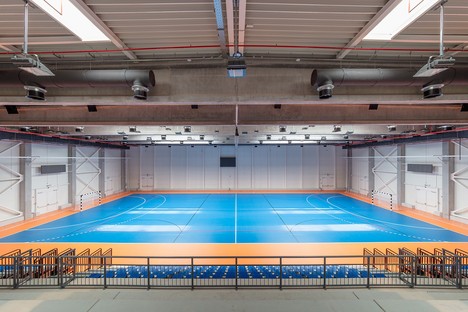 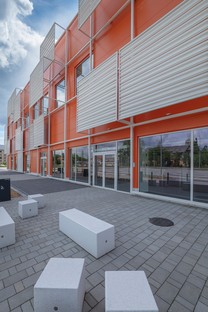 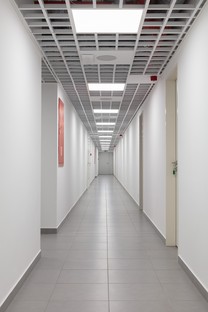 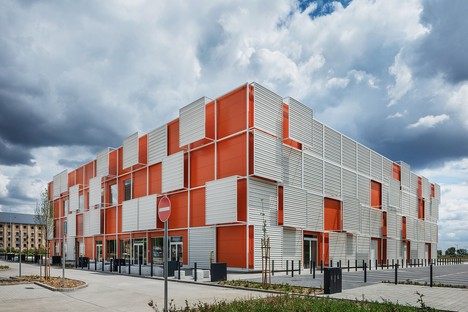 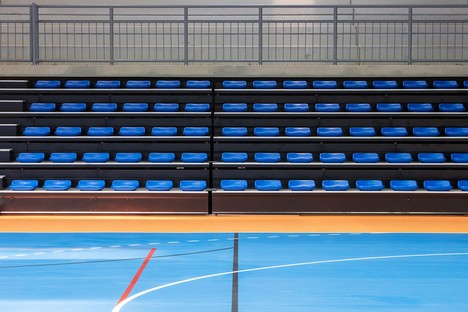 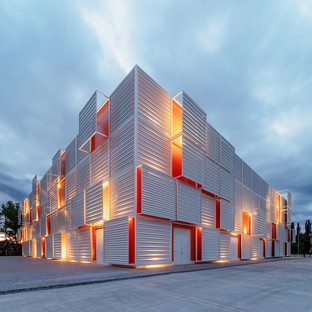 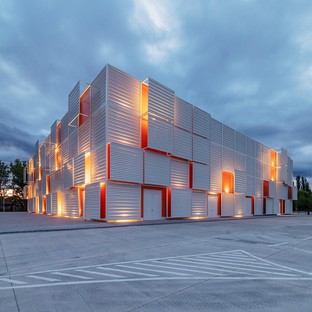 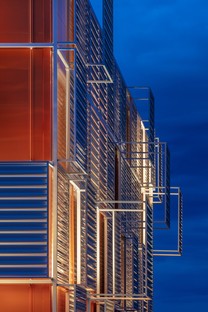 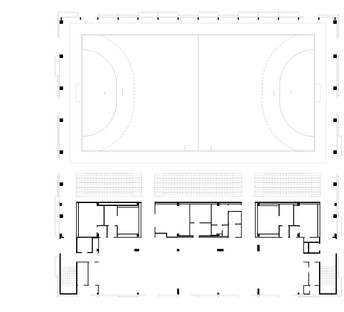