An interesting project by FXCollaborative is featured in the sixth event in The Architects Series, the cultural format developed by the Iris Ceramica Group in partnership with The Plan magazine for SpazioFMGperl'Architettura exhibition gallery. 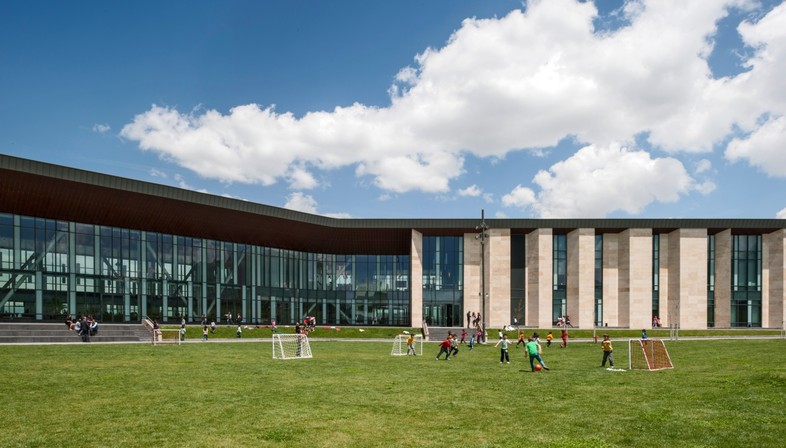 SpazioFMGperl'Architettura is currently showing a documentary film on FXCollaborative, the studio featured in the sixth event in The Architects Series, the cultural format created in partnership with The Plan magazine for the exhibition gallery operated by Iris Ceramica and FMG Fabbrica Marmi e Graniti, the top brands in the Iris Ceramica Group. To mark the showing of this documentary film taking the audience backstage in the New York studio to discover how the architects work, Floornature will present a number of the studio’s most significant projects in various parts of the world. 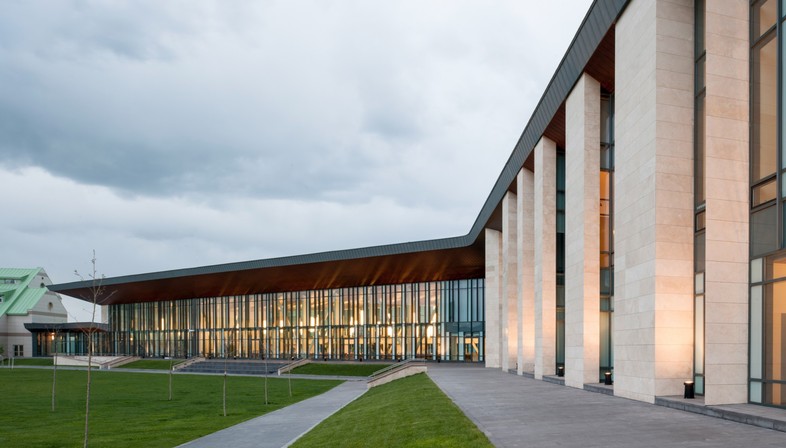 In the ancient Turkish city of Erzurum, which has been known since Roman times, on the Anatolian peninsula near the border with Armenia, FXCollaborative was commissioned to plan an expansion for Bilkent Erzurum Laboratory School (BELS), located on the city’s outskirts on desert land, in a region characterised by very cold winters with temperatures well below freezing.
The project commissioned by Bilkent University of Ankara promotes free high-quality education in line with the highest international standards for particularly worthy students even in one of Turkey’s most isolated and least developed regions. The new expansion of Bilkent Erzurum Laboratory School (BELS) provides spaces for learning and activities in the elementary school and junior secondary school, along with a library, outdoor recreational areas and a cafeteria shared by both schools. 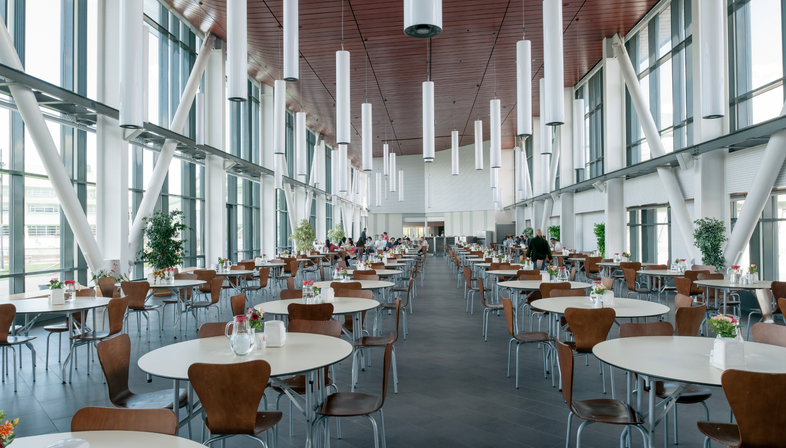 FXCollaborative designed a building of international scope which is inspired by the existing architecture and the morphology of the site and appropriate for the needs of the school’s important educational programme.
The Bilkent Erzurum Laboratory School is designed like two intertwining ribbons, in which the architects followed the natural morphology of the site and took advantage of differences in elevation.
The geometry of the new building also recalls the existing secondary school campus. The building joining the two “ribbons” and the element shared by the two is the cafeteria, an all-glass space on two levels. The floor-to-ceiling windows offer wide-ranging views both southwards and northwards, and this element shared by the elementary and junior secondary schools serves as the point of departure for the two buildings containing the classrooms. 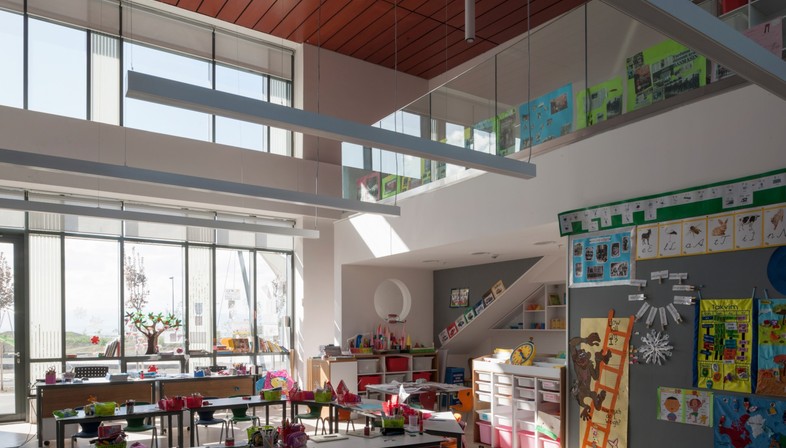 The “ribbon” containing the junior secondary school and the library is built on two levels and extends in a southeast direction, bordering the garden shared with the campus on one side and the school playground, sports fields and entrance on the other. A second “ribbon” containing the elementary school extends in the opposite direction, surrounding a playground for the smaller pupils. The classrooms in this wing are two floors high and receive light from both sides of the building.
The big roof following the slope of the land joins the volumes of the building, and its zinc surface establishes visual continuity with the natural landscape around it: a desert plateau surrounded by the majestic Palandöken mountains. 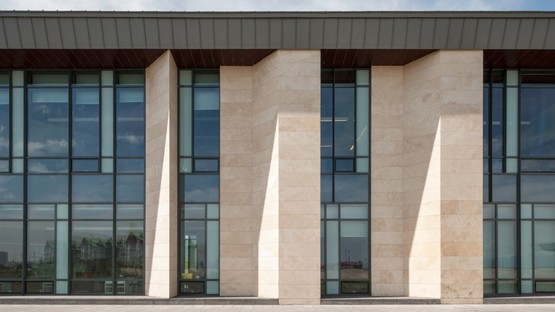 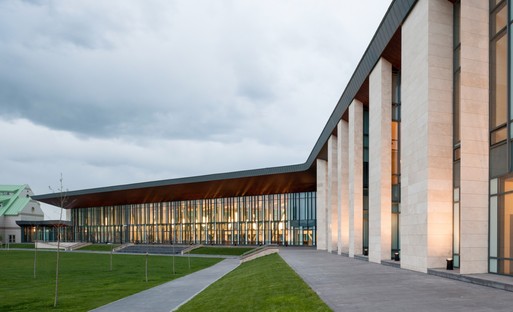 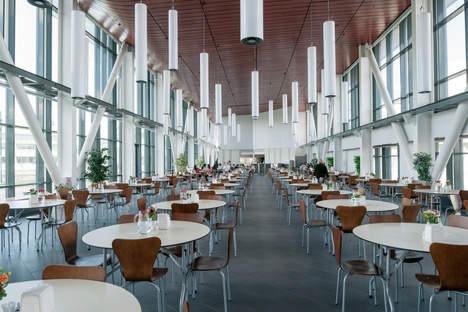 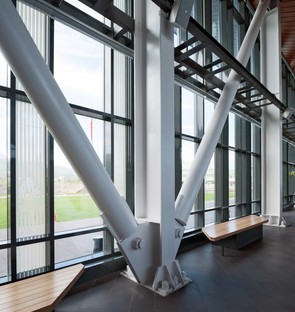 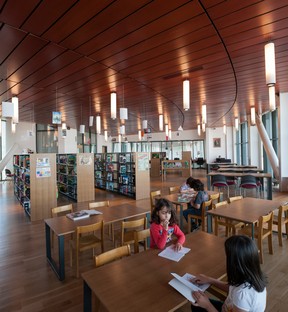 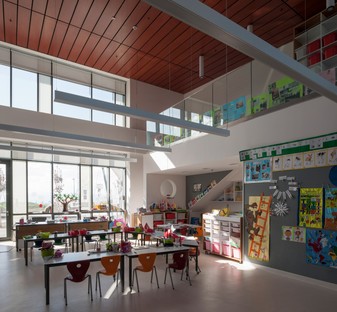 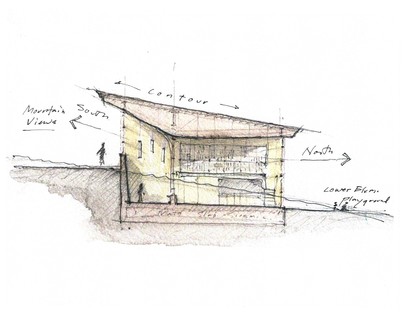 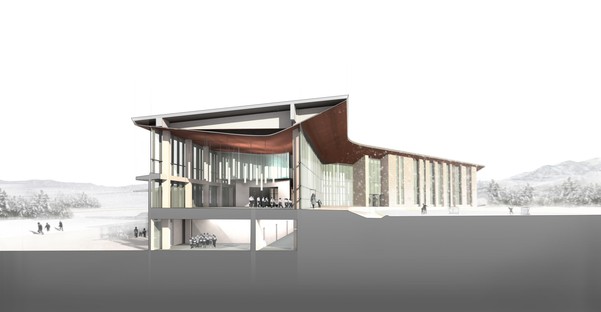 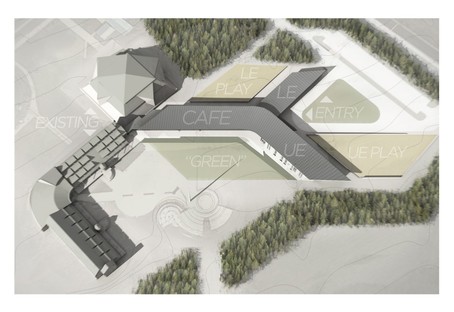 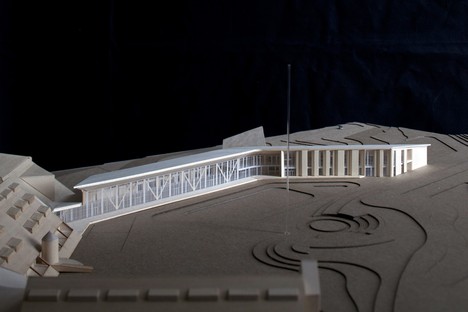