The ephemeral architecture and visionary works of Maurits Cornelis Escher are the subject of a major retrospective including about 200 works on exhibit from November 1, 2018 through April 22, 2019 at PAN: Palazzo delle Arti Napoli. 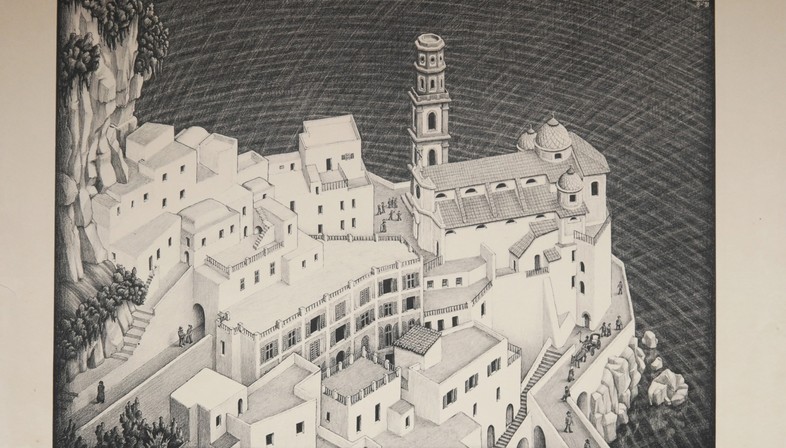 A major retrospective of the works of visionary Dutch artist Maurits Cornelis Escher (1898-1972) opened recently in Naples.
The exhibition, curated by Mark Veldhuysen and Federico Giudiceandrea, is promoted by the Councillorship for Culture and Tourism of the City of Naples and produced and organised by the Arthemisia Group in partnership with the M.C. Escher Foundation. The halls of PAN, which stands for Palazzo delle Arti Napoli, will present about 200 artworks: a vast selection of the famous Dutch artist’s works with a special section focusing on the influence of Escher’s ephemeral architecture and visionary works on subsequent generations. The exhibition begins with Escher himself and brings us up to the contemporary world, including items such as records, comics, greeting cards and more, as well as documentation from advertising, film, etc. testifying to the influence of the Dutch genius and his work in a number of fields. This highly varied exhibition incorporating scientific experiments and teaching aids for visitors of all ages allows everyone to understand the artistic dimension and great popularity of this ingenious, multi-faceted artist. 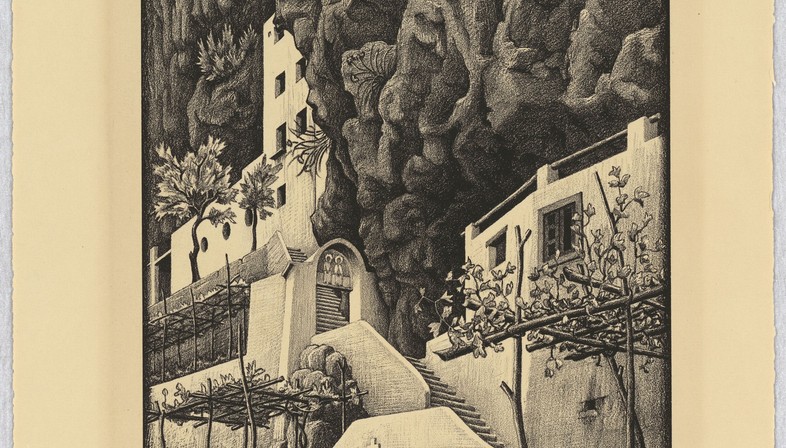 The exhibition in PAN’s premises in the seventeenth century Palazzo Carafa di Roccella on the central Via dei Mille in the city of Naples offers an opportunity to discover a new selection of Escher’s works. In addition to such world-famous and iconic works as Relativity (1953), Bond of Union (1956), Metamorphosis II (1939) and Day and Night (1938), the Naples exhibition presents a series of works Maurits Cornelis Escher produced on a trip to Italy early in 1923, particularly those he made while travelling along the Amalfi Coast to Ravello.
Italy was an important destination for the Dutch artist, who spend a lot of time in the country between 1923 and 1935, and a key episode in his personal life took place in Italy, right in the region of Campania. It was in Ravello, in the region of Campania, in the spring of 1923 that Escher met Jetta Umiker, the young Swiss woman who became his wife a year later, in 1924.
The ragged shoreline high above the sea, the light of southern Italy, the simultaneous presence of Roman, Greek and Arabian elements in the architecture of the Amalfi Coast and the towns of Ravello, Atrani and Amalfi had a profound influence on the Dutch artist.
Escher returned to these places several times, and in 1931 he visited Vietri sul Mare, Amalfi, Ravello, Scala, Positano, Praiano and Conca dei Marini. This voyage was to produce 15 works, including Atrani, Coast of Amalfi (1931), Ruined Houses in Atrani (1931), San Cosimo, Ravello (1932) and The Hamlet of Turello (1932), along with influences and elements that may be found in other works.
In a historic photograph of Maurits Cornelis Escher with his bride Jetta Umiker with the view from above Atrani, we see the cathedral standing on a steep cliff above the sea, an image that was to have a profound influence on the artist, recurring in other great works such as Escher’s famous Metamorphosis II. The big woodcut in which one image flows into another without interruption concludes the exhibition route with the word metamorphose. 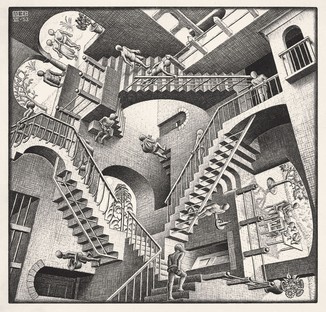 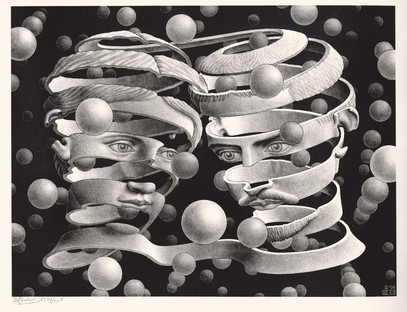 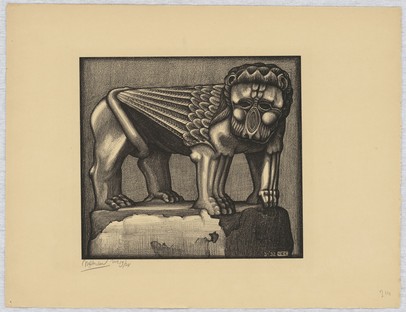 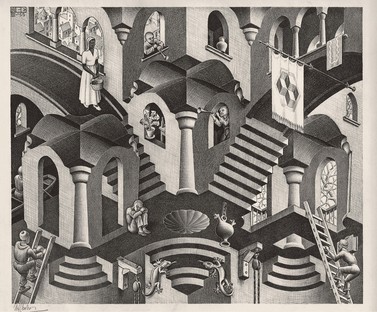 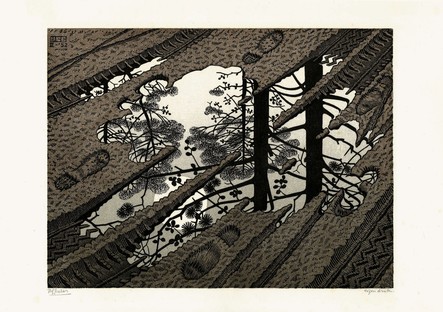 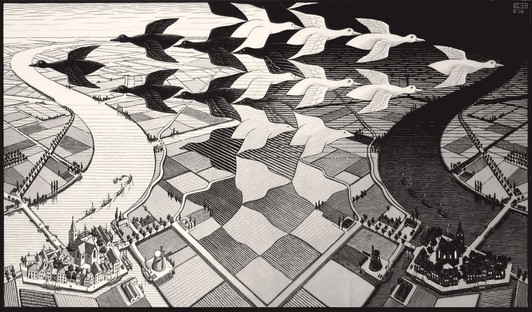 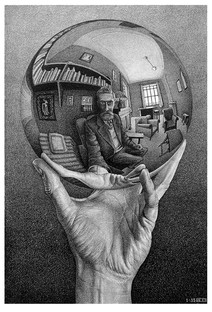 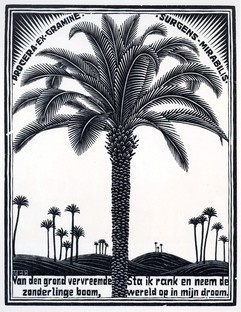 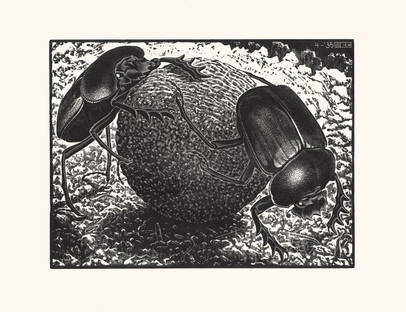 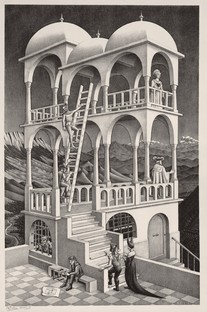 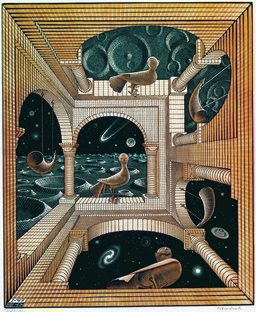 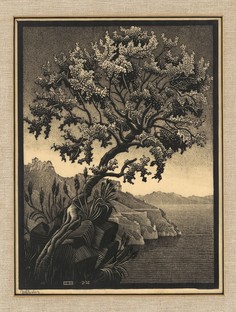 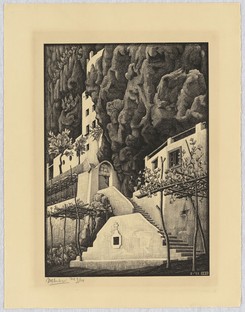 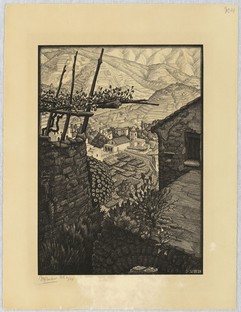 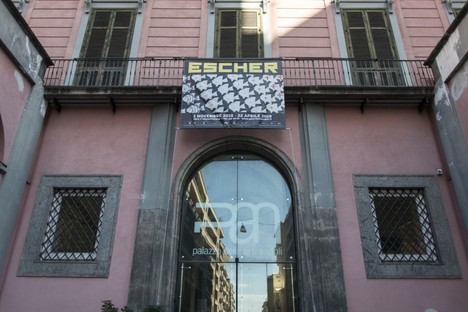 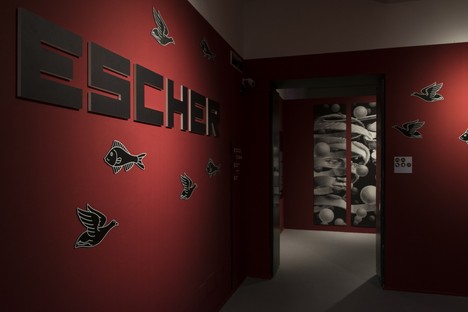 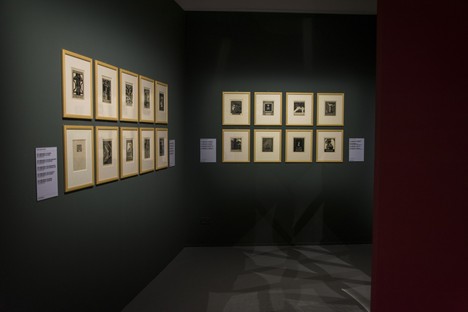 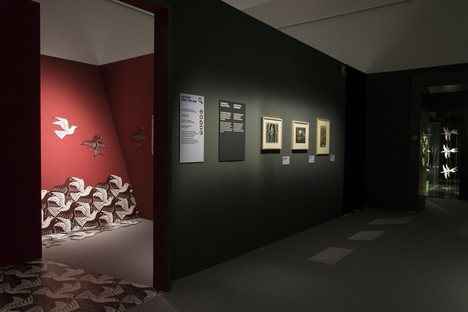 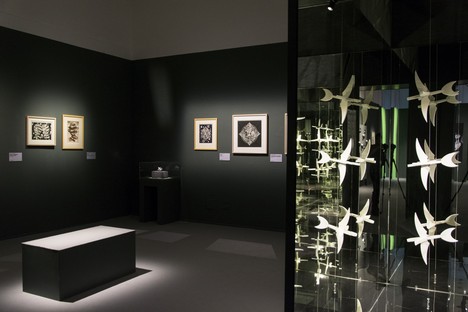