The new roof over Suzanne Lenglen Tennis Court at Stade Roland Garros in Paris, designed by architect Dominique Perrault and his studio, was unveiled during the French Open, the world’s most important tennis tournament held on a clay court. The “plissé”, as the roof was nicknamed right away, will allow tennis matches to go ahead even in rainy weather and at night, as well as making the court suitable for the boxing matches to be held during the Paris 2024 Olympics and Paralympics. 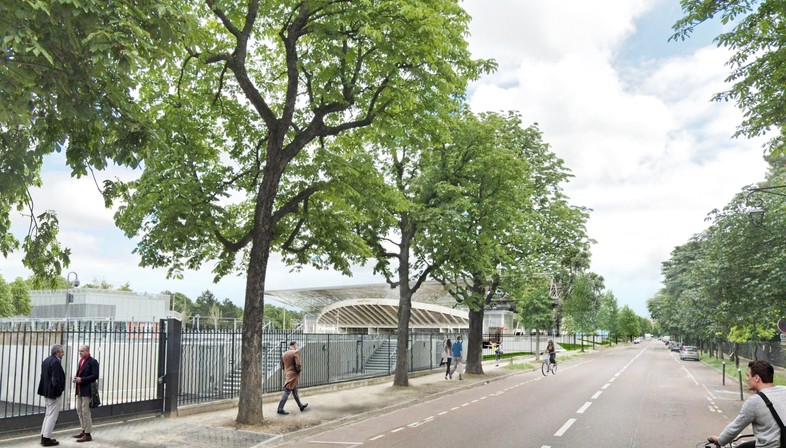 Suzanne Lenglen Tennis Court, the second most important court in Stade Roland Garros in Paris, the French temple of tennis and home to the French Open, will have a new roof designed by architect Dominique Perrault in collaboration with a large team of experts. Immediately nicknamed the “plissé”, the new roof will allow tennis matches to go ahead in the rain and even at night, while also making the court appropriate for the boxing events to be held during the Paris 2024 Olympics and Paralympics.
Stade Roland Garros is in the centre of Ile-de-France, in an exceptional setting where the city has a strong relationship with nature, between Boulogne-Billancourt to the south and Paris’s Bois de Boulogne to the north. In designing the roof, architect Dominique Perrault bore in mind the role the sports complex plays in the city, proposing a solution that establishes a relationship with the existing building and the space around it. Suzanne Lenglen Tennis Court appears to be the main façade of Stade Roland Garros when seen from Boulevard d'Auteuil, and, at the urban level, the new roof will give it a scale consistent with that of the major infrastructure node of the A13, the Autoroute de Normandie.

The project involved a number of technical challenges, as it was not only a matter of sheltering the court and spectators from the rain, but from the wind too, as well as controlling the shadows the roof might cast on the court, disturbing the tennis players. All this was mediated by architect Dominique Perrault’s desire to create a design that would be pure and without artifice, offering a set of technical solutions appropriate for responding to specific problems and incarnating in architectural form the spirit of freedom and elegance associated with the athletic talents of Suzanne Lenglen, la divine of French tennis.
This result is achieved with a minimal structure visible in the form of a U shape, composed of steel elements precisely assembled on a concrete structure. The new roof will establish a dialogue with the existing construction and improve the geometry of Suzanne Lenglen Tennis Court, over which it appears to levitate. It will be composed of two parts: a fixed, visible part jutting out over existing stands, incorporating equipment for folding and unfolding the second part, which is mobile and retractable, made out of a special synthetic fabric offering important technical qualities such as high levels of light transmission, low maintenance, resistance to repeated folding and unfolding movements, and preservation of its mechanical properties over the years, even in cold weather. The U-shape of the fixed part of the roof will cover three sides of Suzanne Lenglen Tennis Court, leaving the view completely free on the northern side, towards the nearby Bois de Boulogne, fulfilling the project’s role in the city. 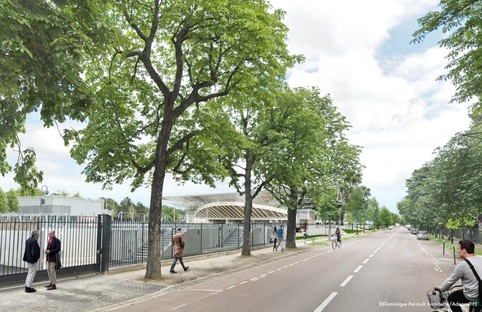 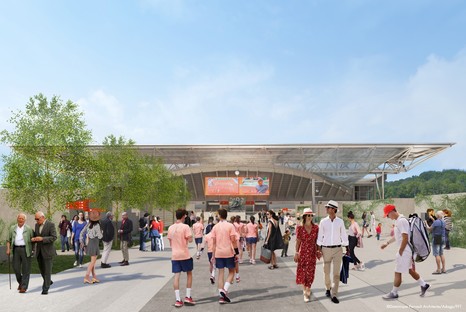 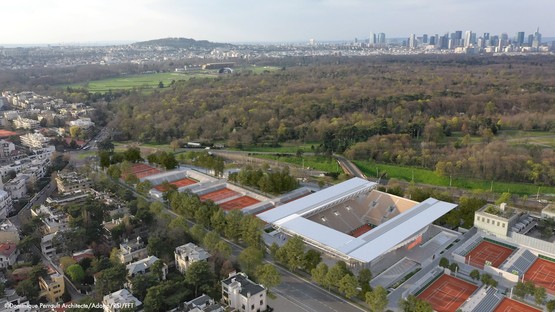 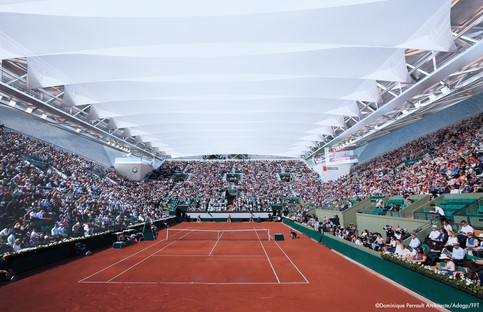 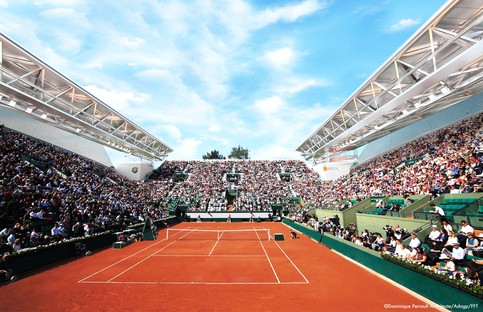 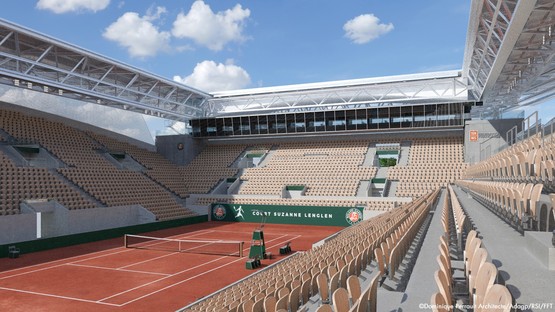 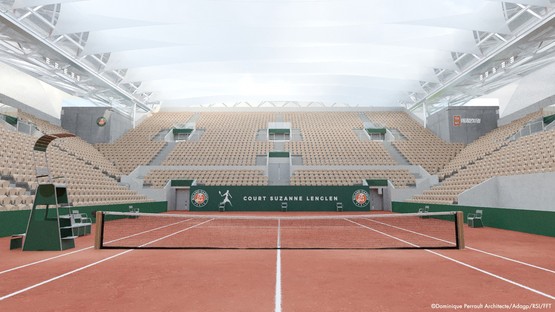 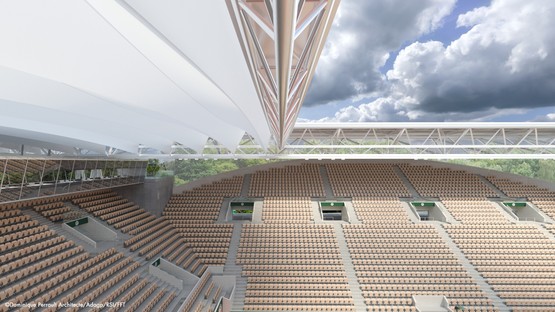 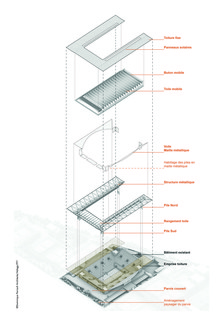 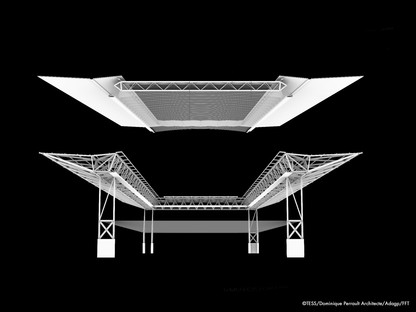 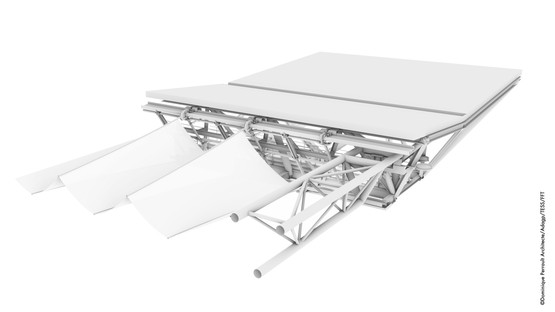 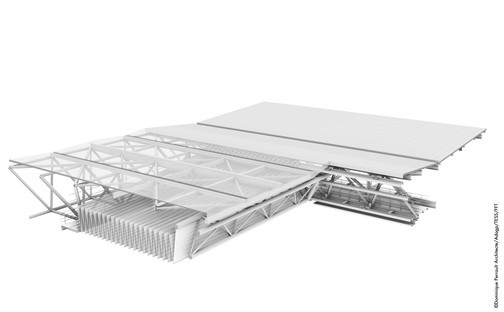