What is the architecture of today’s product design office like? Miklavc, a studio in Škofja Loka, Slovenia, commissioned Dekleva Gregorič architects to design their new offices, offering an opportunity for reflection on the theme of the workplace and the dynamics between private life and career. 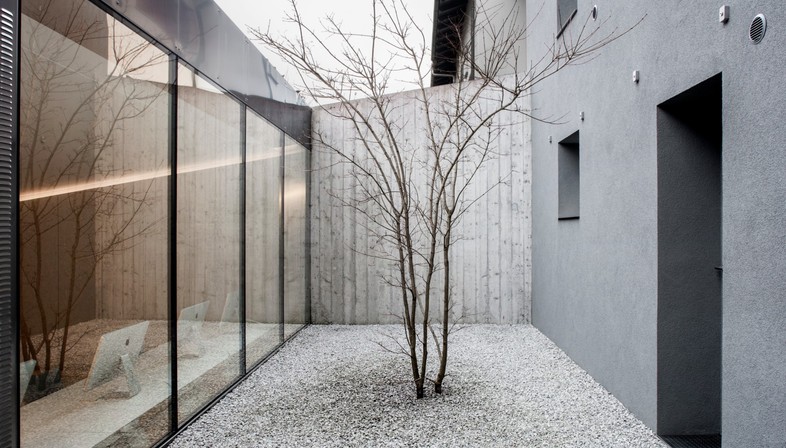 One of the most interesting things about Dekleva Gregorič Architects is the way they view a specific condition as a treasure chest of potential. As in the “sunken design studio” project for Miklavc, where, in a setting without any particular qualities, the Slovenian architects manage to create a different dimension of living, adding new value and overturning the building’s original, consolidated image. The architectural practice was established in the early years after the turn of the millennium, when XXS House in Ljubljana first drew them to the world’s attention.
In that project, which is in some ways similar to the sunken design studio, the architects had to meet the strict requirements imposed by the original position of the building, a small construction set between the houses in the historic heritage district of Krakovo, which needed to maintain its village-like character. The Miklavc studio faced some of the same challenges as the XXS House, such as lack of space and the low overall quality of the original construction.
Studio Miklavc, a group of five product design and visual communications professionals, had a small property on the northwest outskirts of the town of Škofja Loka in Slovenia, a residential neighbourhood built in the seventies characterised by alternating sets of tower blocks and row houses on two levels with gardens, one of which is the property in question: the home of designer Jure Miklavc.
How to reconcile private life and career when there is little space available is a question we have all been asking ourselves in the past couple of years.
The row house had its own private garden, in front of the house on the northern side. In the other homes, the garden is treated simply as a lawn, but Aljoša Dekleva and Tina Gregorič decided to make use of the space by building not on its surface, but underground. Rather than consume more land, they made the lawn into a green roof, and instead of blocking the view from the house, the new workspace becomes practically invisible.
Another unusual feature creating variety in the repetitive imagery of the series of row houses with gardens is the construction of a space which is not entirely underground, but only partially, inclining the green surface of the roof and opening up the lower floor to the daylight.
As the new garden borders on a public footpath to the north, the architects opened up a pedestrian entrance and dug out a concrete ramp sloping slightly downward to provide access to a little courtyard and then to the new "sunken design studio". 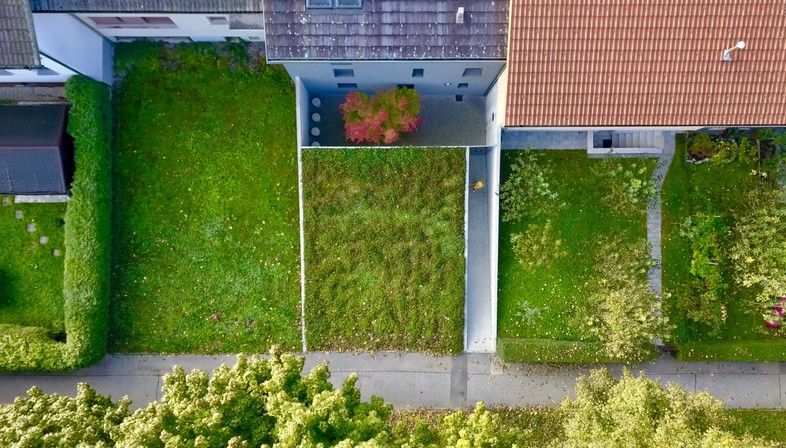 The available surface area is therefore divided into two complementary spaces, the studio inside and the courtyard outside, and the new workspace seems bigger than it really is thanks to the tall windows connecting the two spaces. The foliage of the tree growing in the middle rises above the garden so that the new set-up is recognisable from the street. This will be a multi-purpose space, providing people working at their desks with a link to the world outside, constantly changing at different times of day and in different seasons.
The façade and the interiors of the row house have also been renovated to suit the new plan of the garden: the basement, which is on the same level as the office and the courtyard, contains a garage and other utility areas, with no change in vehicle access from the street to the south. A new door has been opened up onto the courtyard, while the door at street level has been closed and converted into a window. The two upper levels and the attic have been redesigned as a home, distinguishing between the building’s two functions. Even though there is no longer a direct entrance on the ground floor, there is still a close-up view of the garden; now that access is on the lower level, the ground floor is more closely connected with the upper levels of the home.
Thus the new courtyard becomes an open-air foyer connecting personal space with office space. Though created as an intimate, hidden place, taking advantage of the fact that the pebbles on the ground outside are level with the surface of the desk by the window, the office maintains continuity with the courtyard and communicates with it. In this lowered position, designers at their workstations enjoy a better view upwards, while diffuse light reaches as far as the lower end of the room.
The 48 square-metre space appears bigger than it is thanks to a series of cabinet units on wheels aligned along the lower wall to the north. These mobile cupboards are normally kept against the back wall of the studio, but can be rearranged to transform the space in different ways. The bare concrete structural walls contrast perfectly with the industrial design of the stainless steel frames of the doors and windows, while the side walls are covered with felt to ensure proper acoustics. 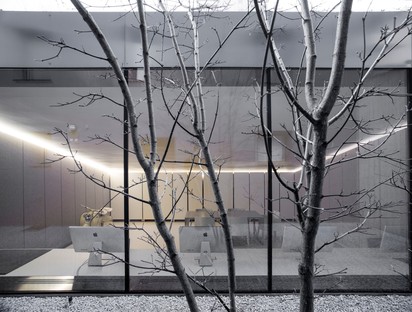 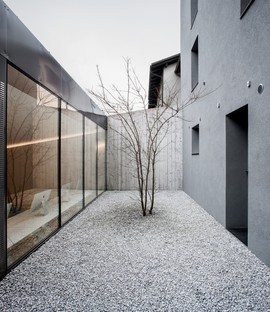 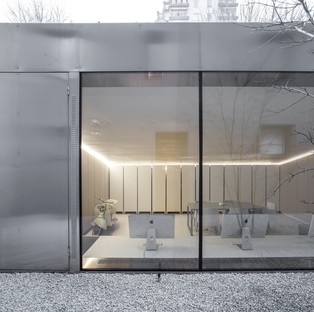 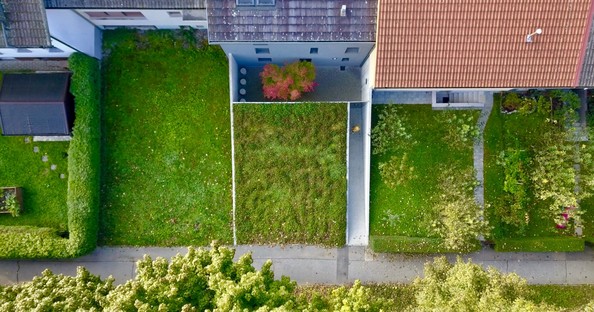 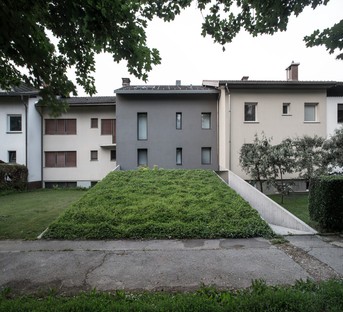 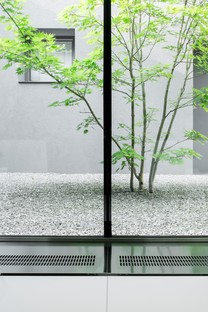 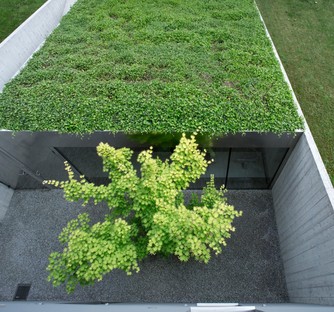 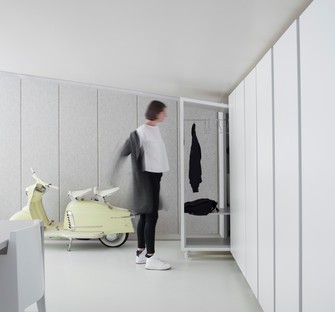 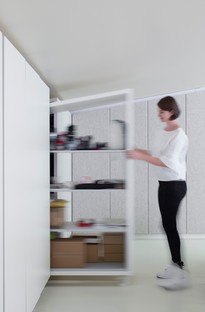 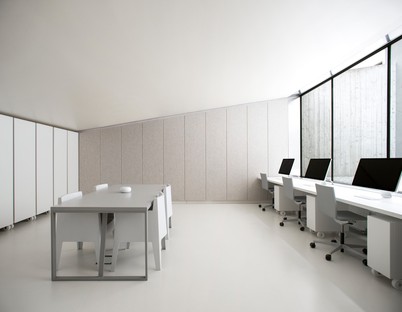 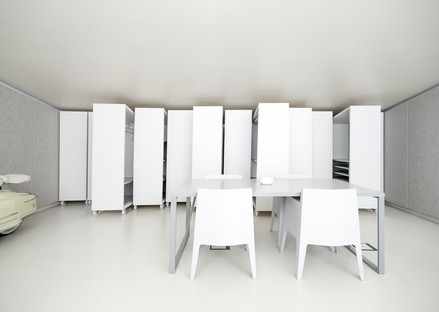 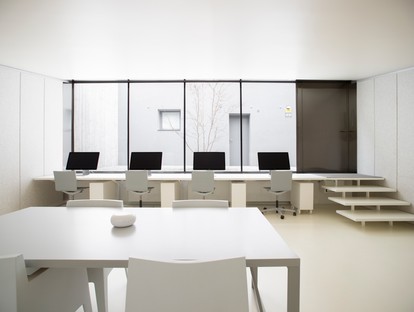 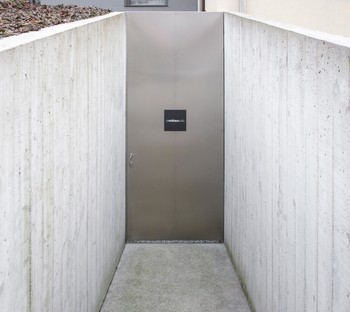 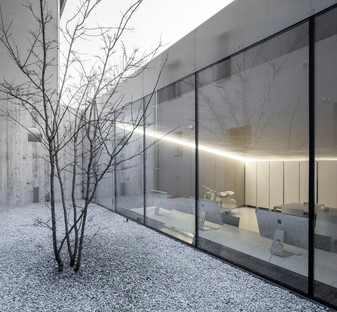 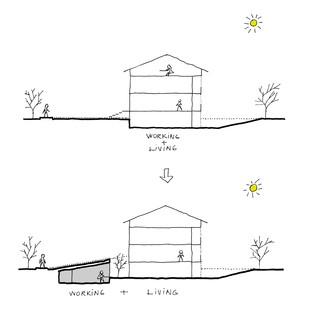 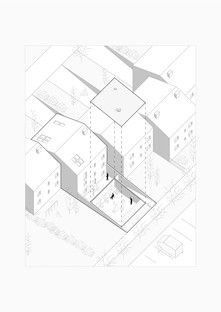 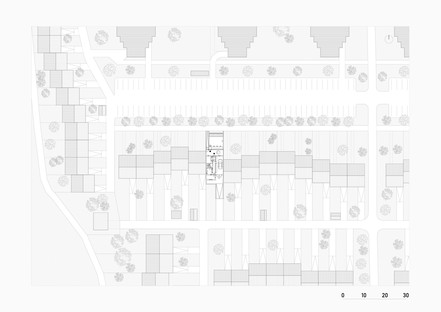 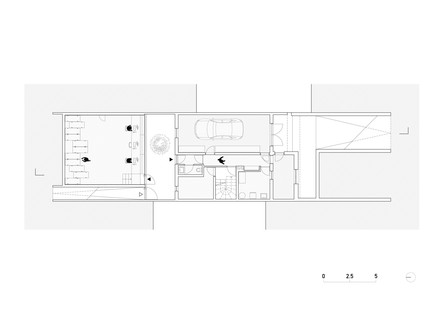 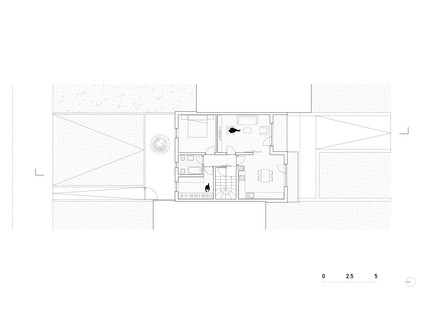 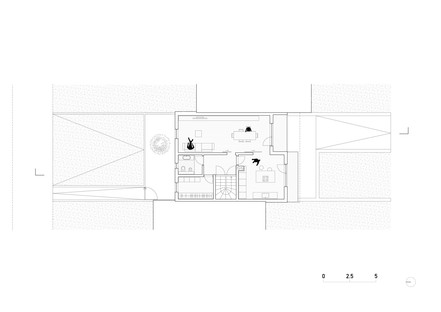 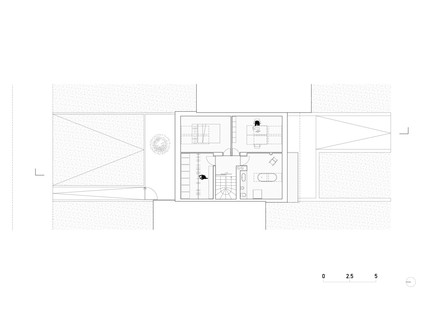 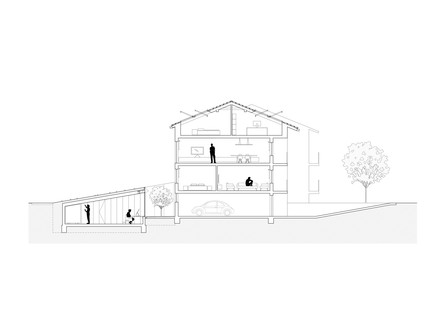