De Ferrari Architetti restored and reclaimed Turin’s historic Circolo della Stampa Sporting, with the 1943 clubhouse designed by architect Domenico Morelli. The structure was used as the extended headquarters of the Nitto ATP finals, the tennis tournament the Italian city will be hosting until 2025. 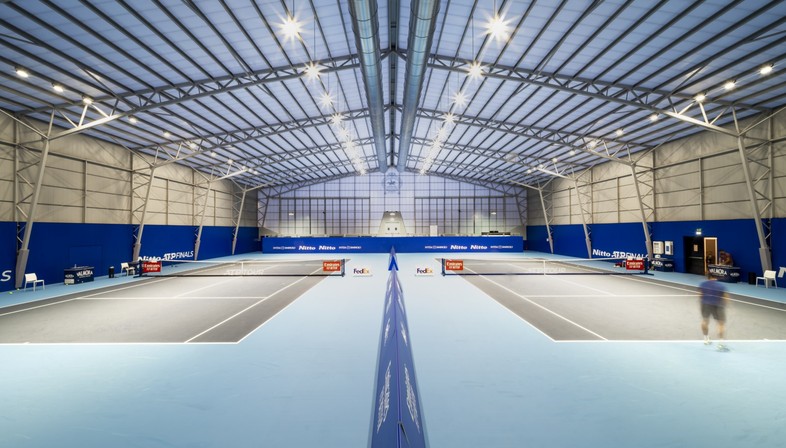 Until 2025 Turin will be hosting the ATP Finals, one of the world’s most important international tennis tournaments, known as the Nitto ATP Finals under sponsorship agreements. In the professional sporting event, the eight best singles players and doubles teams in the ATP ranking play off for the title of "Masters" of the tournament, which comes with a large cash prize. The tournament was first held in Turin November 14 through 21, 2021, when German tennis player Alexander Zverev won the singles tournament and the French duo of Pierre-Hugues Herbert and Nicolas Mahut won the doubles. The city adapted and restored a number of existing buildings to host the international sporting event: architect Benedetto Camerana transformed the Pala Alpitour designed by Arata Isozaki for the 2006 Winter Olympics to host all the tennis matches, while the Circolo della Stampa Sporting was reclaimed by Studio De Ferrari Architetti to provide a broader base and Training Centre for the 2021 Turin Nitto ATP Finals.

Turin architectural studio De Ferrari was appointed in February 2021 after winning the design contest for restoration of the city’s Circolo della Stampa Sporting. The restoration and renovation project allowed the city to reclaim the historic Circolo Sporting complex and sports facilities, making the circle into the Training Centre for the ATP Finals, with two Greenset tennis courts on which the world’s top tennis players practiced before taking part in the matches held in the nearby Pala Alpitour.

Turin’s Circolo della Stampa Sporting complex has more than sixty years of tradition behind it as one of Italy’s most prestigious clubs for competitive sports events. The complex was built in the early 1940s in a green oasis next to the Olympic Stadium, right in the city centre, and is composed of an elegant clubhouse designed by architect Domenico Morelli in 1943, a 40 x 50 metre pool with an Olympic diving board and a 4000-seat amphitheatre-shaped stadium field which is considered a historic heritage building and protected by the Architectural Heritage Superintendency of Piedmont.
De Ferrari Architetti’s project focuses on restoration of the clubhouse designed by Domenico Morelli, and the architects maintained the building’s Rationalist spirit, building a canopy roof to shelter the entrance to the foyer. A new lighting system was designed for the space, restoring existing elements such as columns covered with mosaics and the original floors and plasterwork. The project also involved renovation of a 1960s shed, converted into the tournament training centre. The existing metal structure has been recovered and restored, using a new high-tech semi-transparent polycarbonate coating on the walls and roof. Lastly, the locker rooms have been completely redesigned to look like tennis courts, with bright yellow furniture the colour of tennis balls. 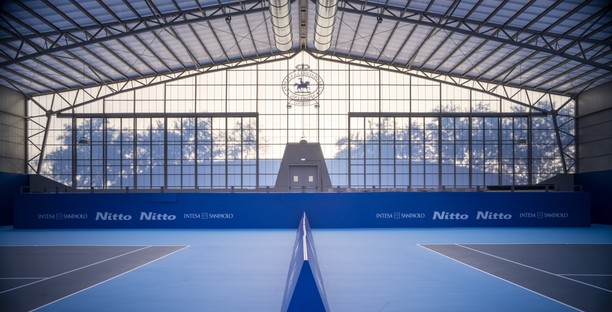 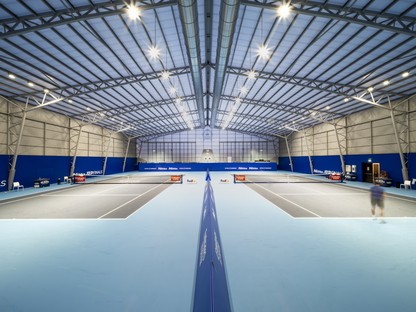 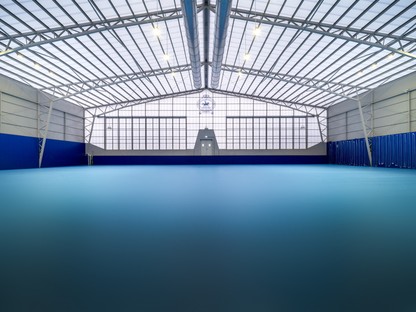 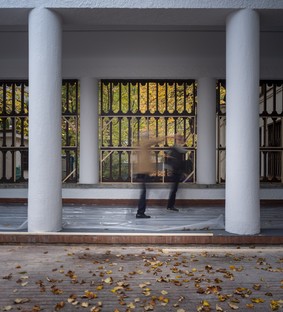 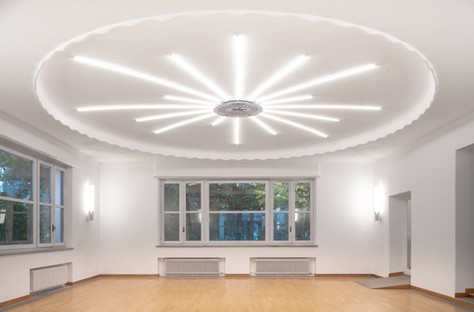 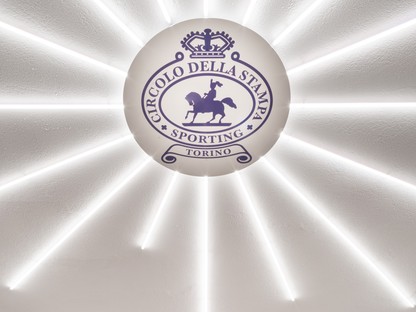 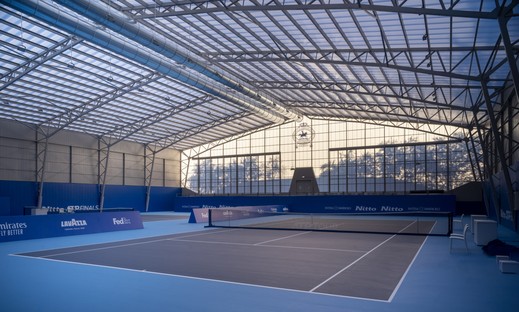 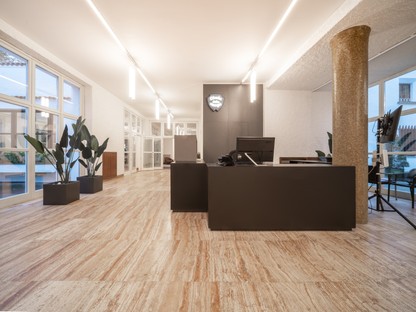 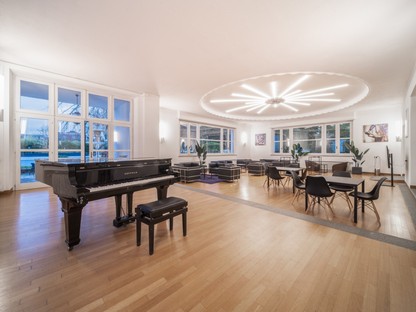 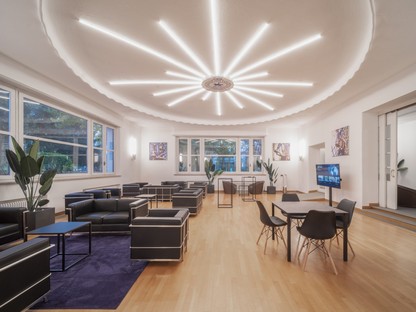 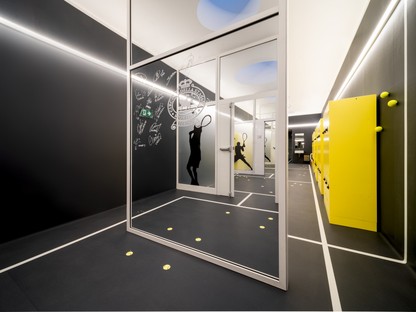 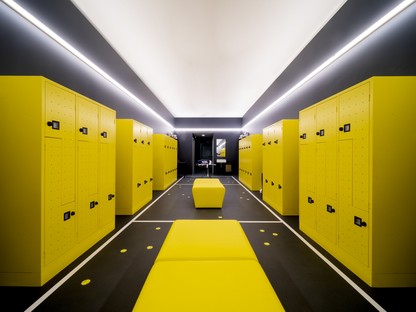 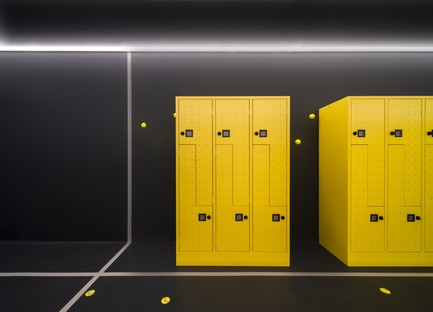 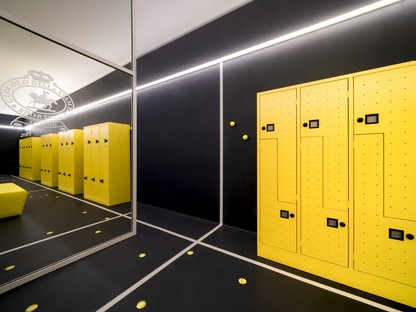 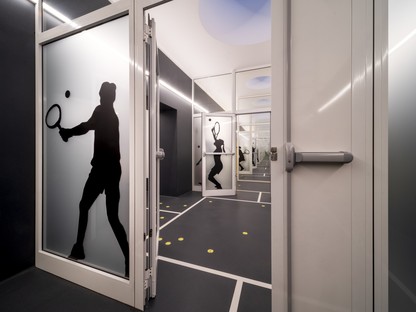 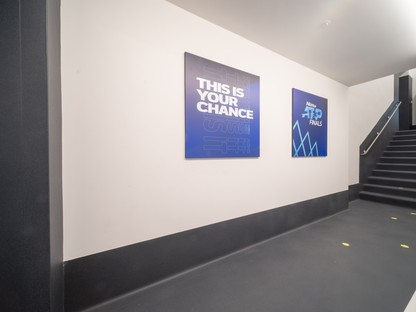 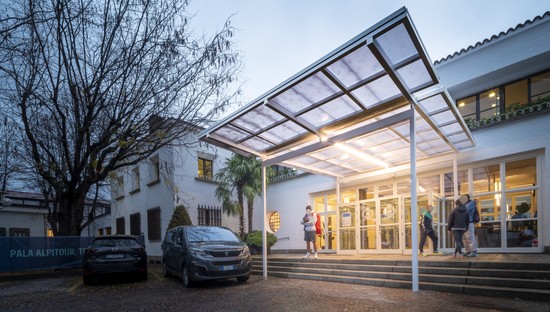 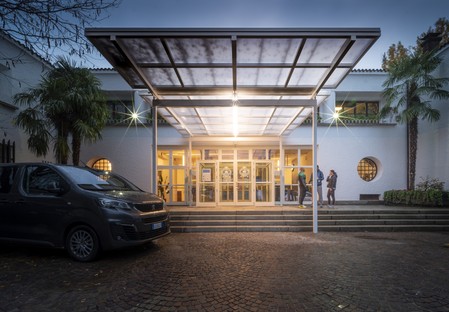 Icon Architects interior design among the rooftops of Turin