Christ & Gantenbein: expansion of the Landesmuseum in Zurich

Christ & Gantenbein were involved in the renovation and expansion of the Landesmuseum, the Swiss national museum in Zurich. Christ & Gantenbein’s new body arises out of the older historicist museum, completing the idea of an island of culture in the heart of Zurich. 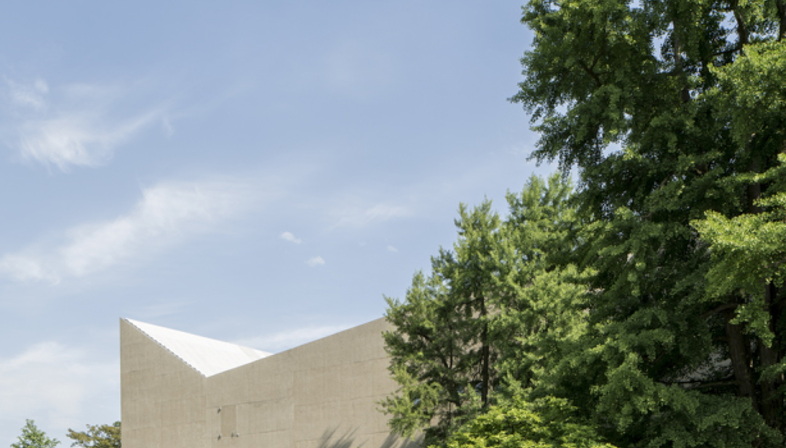 In 2002, Basel studio Christ & Gantenbein won the competition for restoration and expansion of the Landesmuseum Zürich, the principal seat of the Swiss National Museum in Zurich. This important city museum was built between 1892 and 1898 to contain collections illustrating the country’s cultural history. Designed by Swiss architect Gustav Gull in the typical historicist style of the age, the first museum complex was inspired by English and French castles, with towers and courtyards, and surrounded by greenery, apparently on the instructions of its first curator, Heinrich Angst.
The museum is in a central location in the city, on the peninsula created where the rivers Sihl and Limmat flow together, right in front of the railway station. With the two riverbanks to the east and west, Platzspitz Park to the north and the railway to the south, the museum complex was already a sort of “fortress” in the city, the monumental presence of which is now underlined by Christ & Gantenbein’s expansion.
The long process of design and execution began in 2002, followed by restoration of the wing facing the railway station between 2006 and 2009 and completion of the new building between 2012 and 2015, after which the School of Fine Arts and the inner courtyards were renovated and the expanded complex was inaugurated in the summer of 2016. Renovation of the east and west wings will be completed between 2017 and 2020. The museum will then be completely opened to the public again, beginning a new chapter in museum presentation in the history of Switzerland.
The expansion inaugurated on August 31 2016 contains new exhibition halls, an auditorium and a library in a style that contrasts boldly with the previous one while dialoguing with it in terms of size and materials. The idea underlying Christ & Gantenbein’s project was to form a single whole with the new building, a nucleus recognisable as unitary both while exploring its interior, in the new courtyards created by joining the old and new museums, and from a distance, as from the opposite banks of the rivers.
The characteristic tower on the first museum becomes the dominant theme in the second. And so the walls topped with spires, which are in turn historicist interpretations of the past, translate into a zig-zag profile, and the new structure emerges against the backdrop of the old one, with the same emphasis and magnificence, though in a completely different, contemporary, geometric, rigorously plain idiom. “Thus the new is inconceivable without the old, and yet unmistakeably modern,” say the architects of Christ & Gantenbein.
The volume of the expansion fits into the Gustav Gull’s old complex with its open courtyard plan right where the perimeter is interrupted, naturally opening onto a second area, with a deconstructed layout: this layout offers façades which reflect motion, however imposing they may be. Anchored to the historic building to the west, the new construction turns eastward, toward the river Limmat, forming two new courtyards, circumscribed but also open to the park. The new structure is raised like a bridge at two points, joining the old wing with the landscape, the park and the rivers. Inside, this bridge contains a monumental series of staircases leading to the biggest exhibition area and the seats in the auditorium.
The sense of solid imperturbability of the historicist construction, with its rectangular floor plan and “reassuring” decorations, contrasts with the equally imposing bare concrete structure that rises out of the old building with a new lightness. The staircase in the two parts is unvaried, while the new concrete dialogues with the ancient tufa stone as if it were freely translating it into a contemporary idiom. The stone walls of the nineteenth-century building are echoed in the 80 cm thick concrete walls providing the high degree of thermal insulation required under the Minergie-P Eco standard. 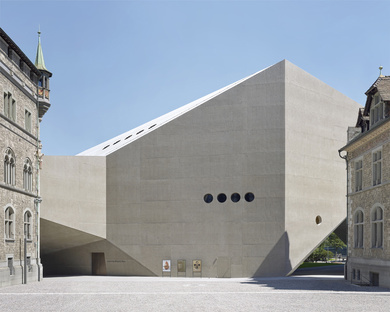 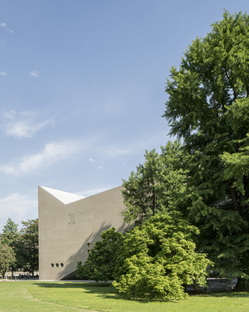 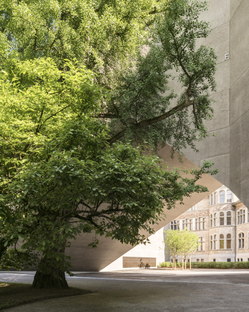 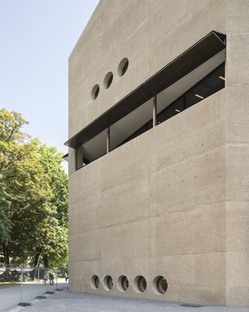 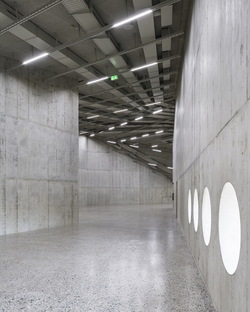 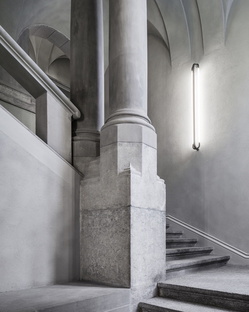 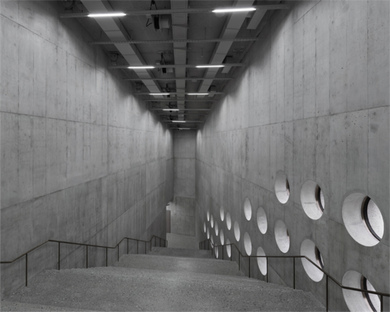 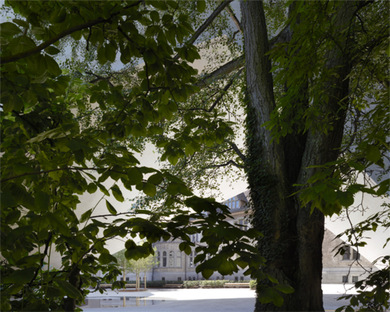 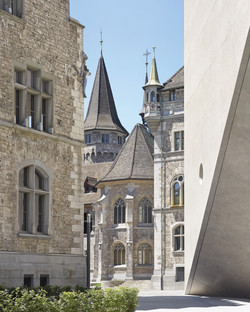 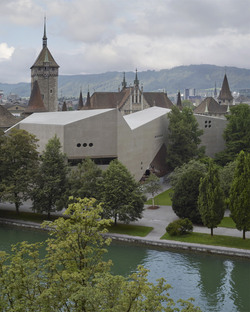 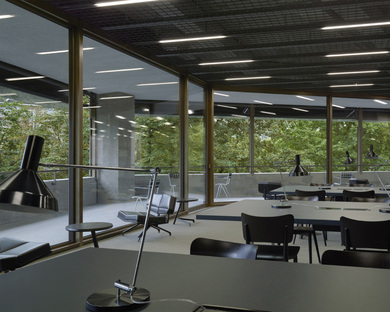 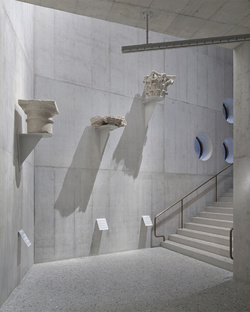 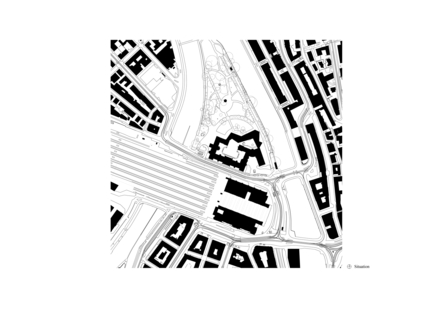 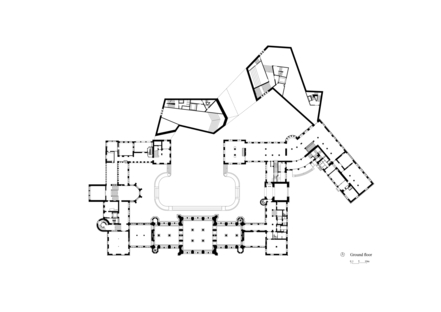 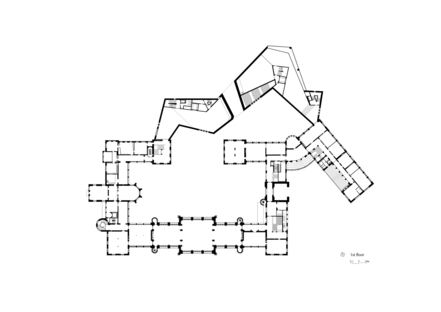 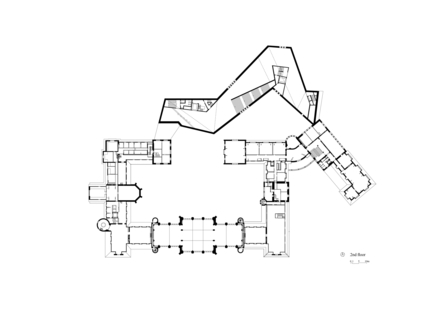 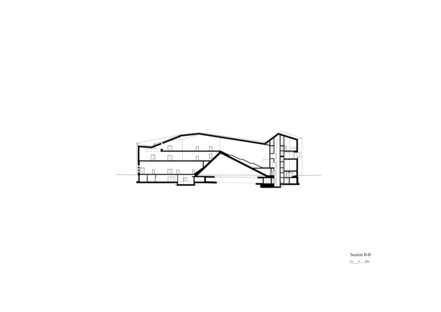 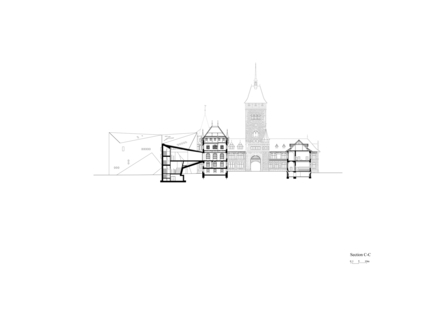