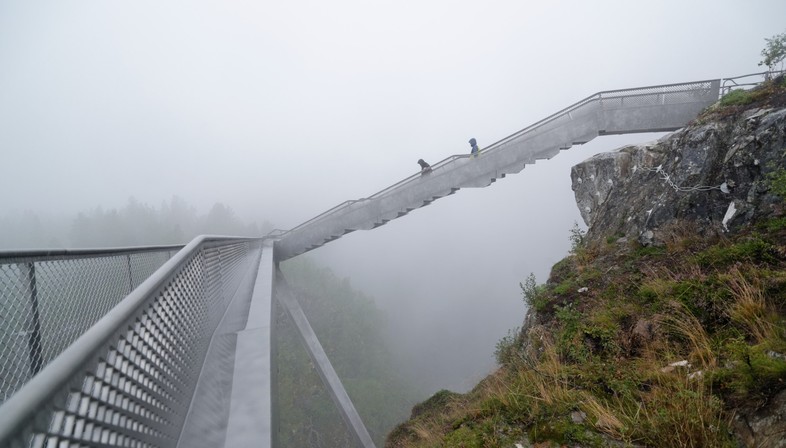 The pedestrian bridge designed by architect Carl-Viggo Hølmebakk for the Vøringsfossen waterfall was inaugurated this past summer, project that is the result of a design competition won by the architect in 2009-2010. The new Vøringsfossen pedestrian suspension bridge is a prime example of architecture and technology coming together. The bridge is part of a breathtaking natural context, without disturbing the landscape, but rather enhancing it. The Vøringsfossen waterfall, part of the so-called Norwegian Scenic Route Hardangervidda, is the largest in Norway and has become a popular tourist attraction since the early 1800s. In the past, the 182-meter-high waterfall could only be seen from the bottom of the Måbødalen Valley. Around 1890, together with the construction of the Fossli Hotel, lookout points were built to allow visitors to admire the waterfall from new viewing points, now integrated by the new suspension bridge.
The pedestrian bridge is part of a larger project, divided into three phases and originally started in 2018 when the safety of the other panoramic points was improved, in addition to the construction of fences, parking lots and the service building under the Fossli Hotel. The third and last intervention phase will be launched in 2021 and provides for the construction of paths, together with a new visitor and service centre to complete the entire route around the canyon that dominates the Måbødalen Valley.
The key element of this second phase is the bridge. Architect Carl-Viggo Hølmebakk stressed that a number of different factors have influenced the design of this infrastructure. On the one hand, the need for a robust and safe structure, while on the other the necessity to adapt to the existing route, the natural context and the landscape, as well as, obviously, providing a breathtaking experience with new and spectacular viewpoints of the waterfall and over the narrow valley.
The result was achieved with a steel bridge composed of seven parts constructed off-site and then assembled on-site. The bridge is 45 metres long, with 99 steps that allow visitors to cover a difference in height of 16.5 meters between the two ends. The unusual X shape makes it possible to access the bridge at two points, following a safe path along the edge of the canyon. The upper access point is located near the Fossli Hotel, while the lower one can be reached through the Fossatromma naturalistic area, where the construction of the new visitor centre and of other services are set to be completed by 2023. The nature trail unwinds through a birch forest and uncovered areas, reaching the edge of the rocky ridge where platforms and other observation points were built, offering hikers multiple secure observation points. An alternative route is also available for visitors who are not brave enough to cross the bridge, allowing them to reach an old stone bridge, further upstream, which crosses the river. 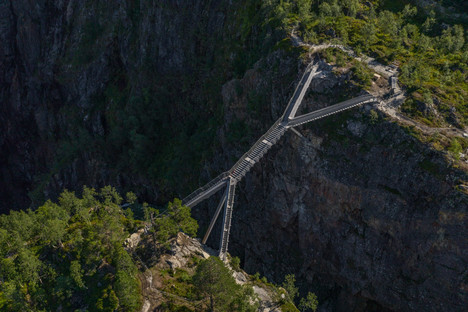 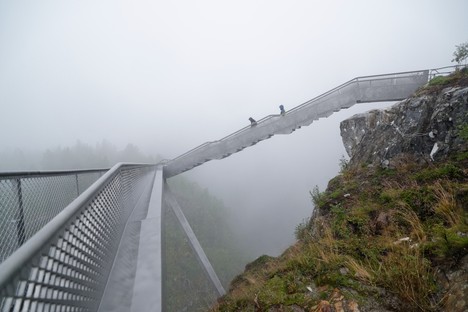 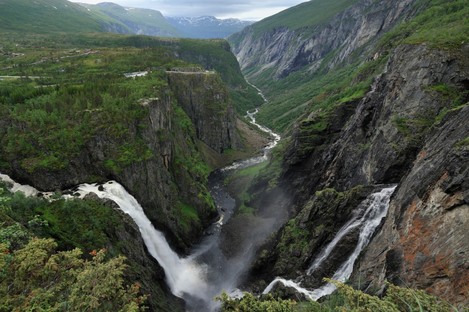 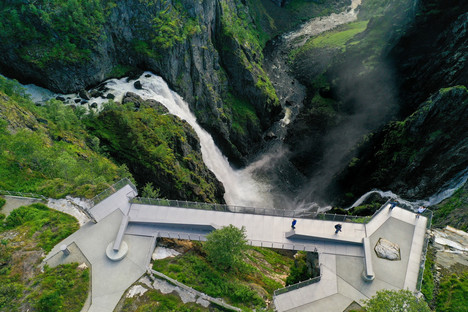 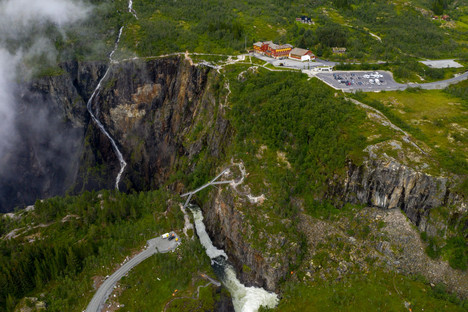 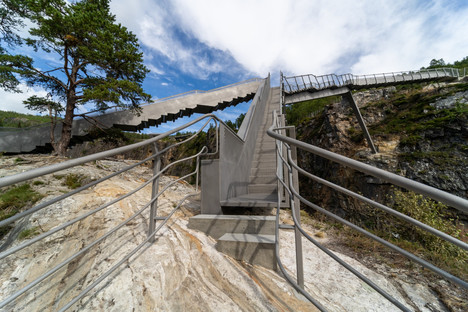 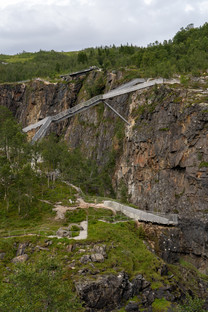 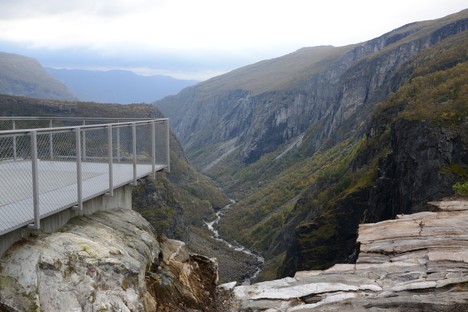 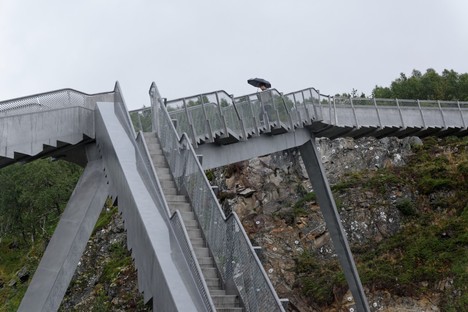 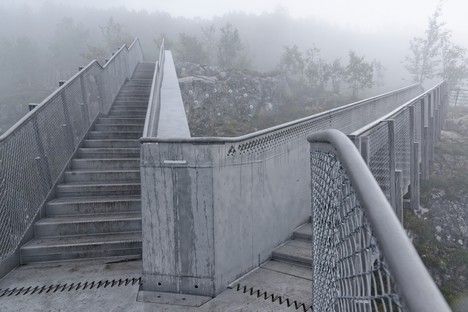 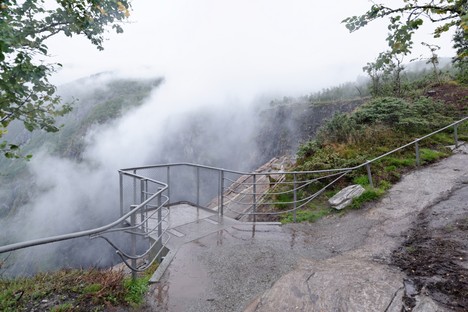 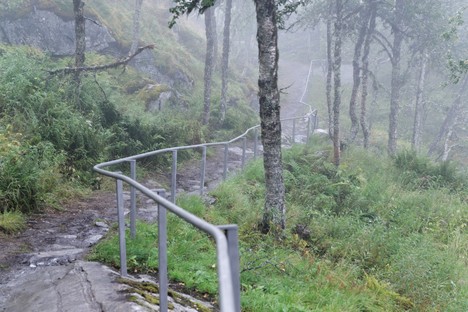 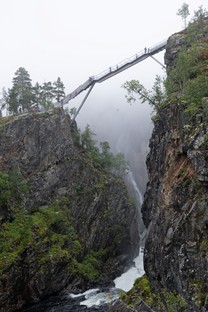 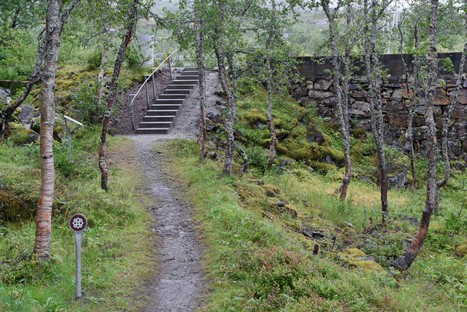 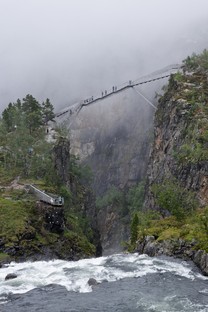 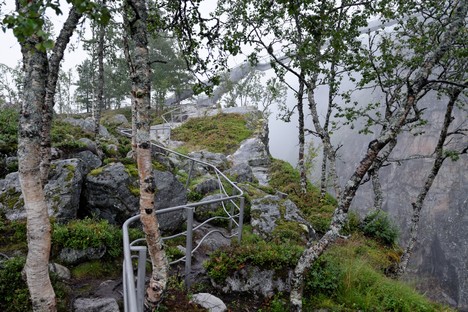 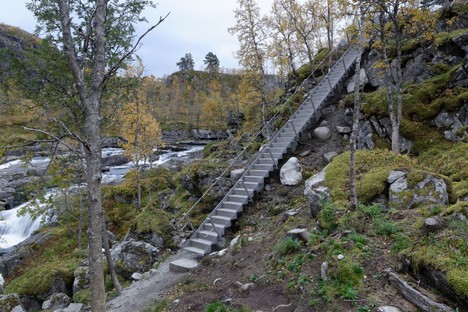 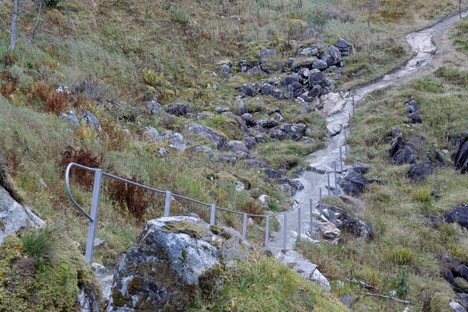 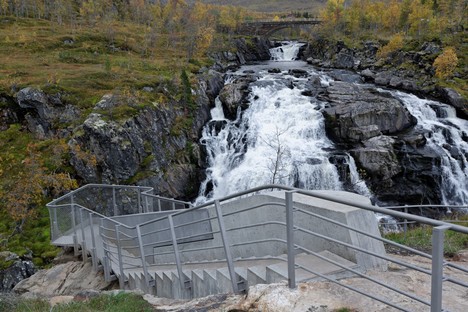 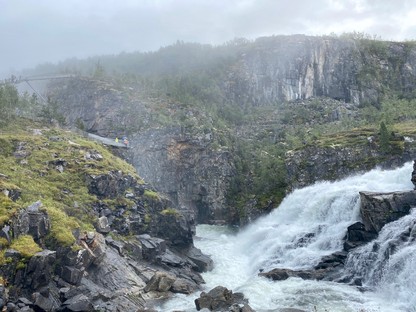 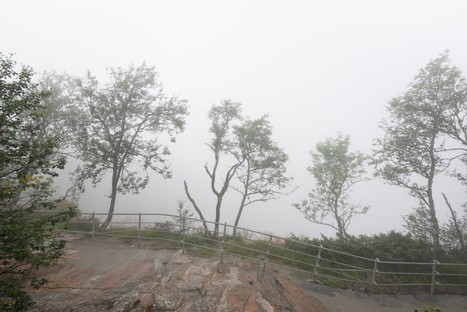 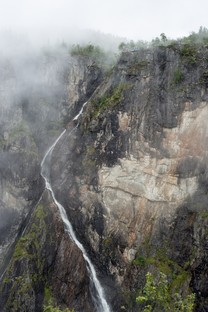 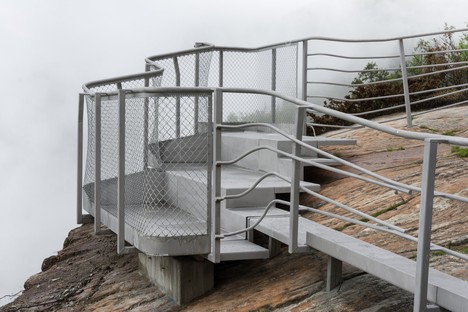 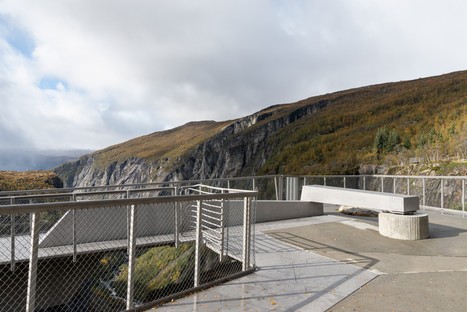