The a9a architects studio has designed the new bookshop of the Chinese Fang Suo bookstore chain in the OCT O'PARK commercial district in Chengdu. The project involved the recovery of a pre-existing building with a rounded triangular shape where natural light becomes the material of the design. 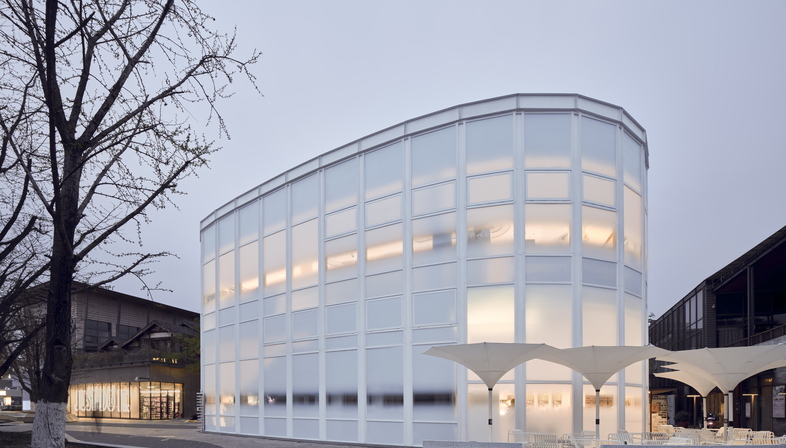 A bookshop in a neighbourhood with a commercial vocation becomes, for many, the coveted oasis of peace after shopping, or even the perfect refuge where to hide while others shop. Those who come to the OCT Huanleli shopping street, in the district of Jinniu, in Chengdu can breathe a sigh of relief because here, they can find the Fang Ting Bookshop, part of the Chinese Fang Suo bookstore chain that opened a few years ago. The renovation and redesign project of the original OCT Art Centre in the southeast part of the OCT business district, next to the Huanglegue River, was entrusted to the a9a rchitects studio, a young collective of architects, designers and above all thinkers. The architects kept the pre-existing structure characterised by a rounded and glazed façade, while obviously rethinking the interiors and a number of details to meet the client's requests for a new format of the traditional bookshop.
A stimulating task that offered many challenges, starting from the triangular plan of the original building, to the limitations dictated by the shape of the façade and the numerous plinth structures found in the interior part, which defined the spatial rhythm of the space, for a total area of 860 square metres.
To start off, the team of a9a rchitects designers worked on the façade, replacing the transparent glass with glass panels of different degrees of transparency to ensure, on the one hand, the contribution of natural light that enters the new bookshop, and on the other the privacy of users. Combined with the original shape of the building and the design concept of an "electromagnetic cloud", a9a rchitects proposed a two-storey bookshop with areas organised according to uses and themes. A solution that meets the basic needs of the bookshop, while also manifesting itself in the design elements, allowing customers to feel as if they are surrounded by a sea of books. The selection of furnishings play an important role in this concept. On the first floor we find four, large movable tables that allow for redesigning the spaces and adapting them to the specific needs, from studying to workshops to book presentations. The ceiling with rounded panels dialogues with the curves of the tables and shelves.
The role of the staircase leading to the second floor is also interesting, which takes up the original staircase of the building, expanding its width and adding a platform as a transition space between the two floors. To display the best-selling list, on the other hand, a dedicated shelf has been designed that accompanies bookshop customers to the central reading space. Here, the low height of the ceiling and the arrangement of the shelves helps create a relaxing and enveloping atmosphere, where users can relax with a book in their hands. Thanks to the intervention conceived by a9a rchitects the neighbourhood now enjoys a cultural attraction that enriches the local context, all without building anything new, but making the most of the pre-existing elements. 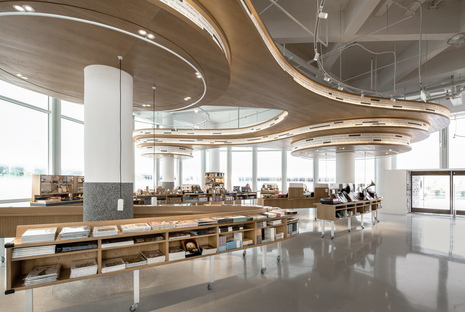 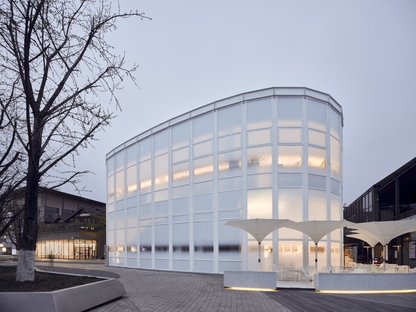 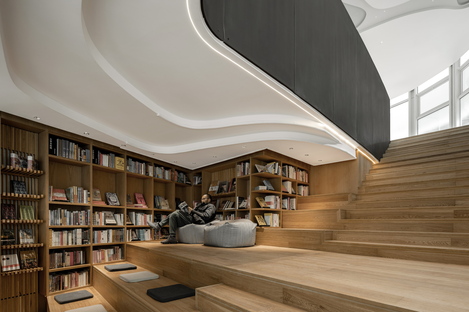 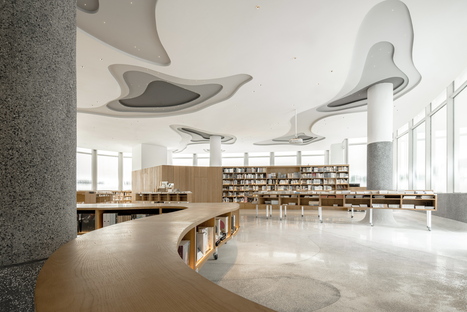 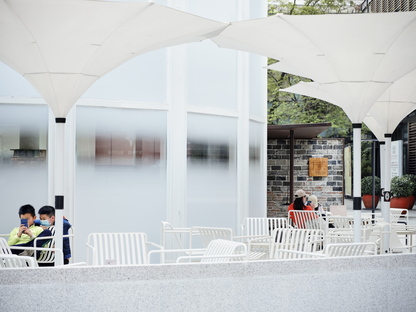 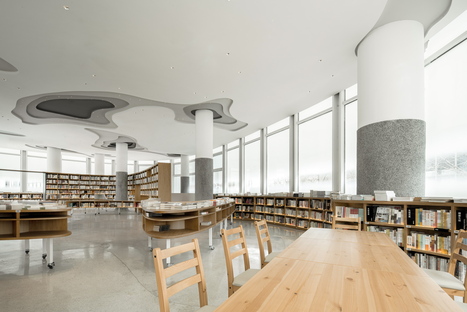 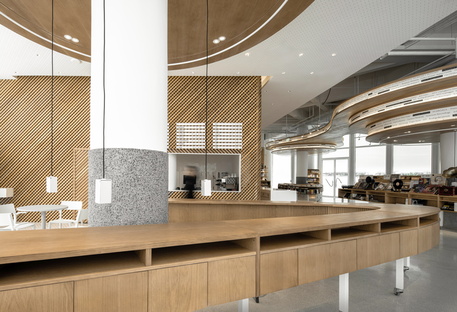 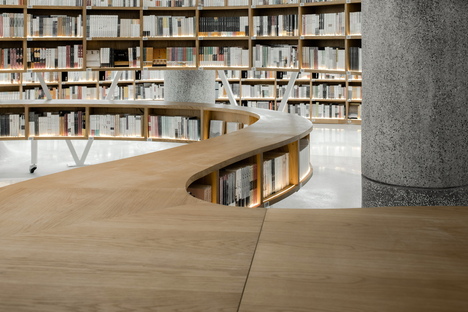 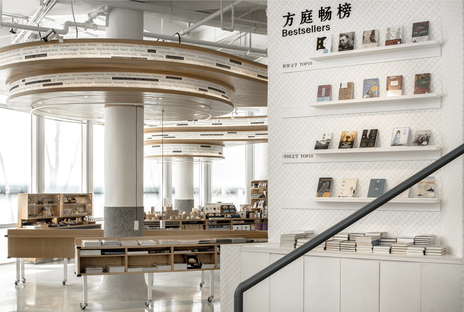 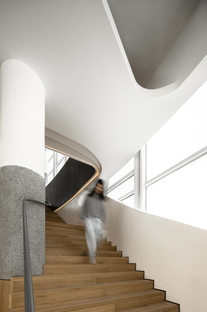 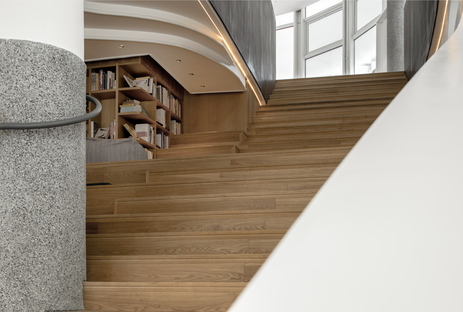 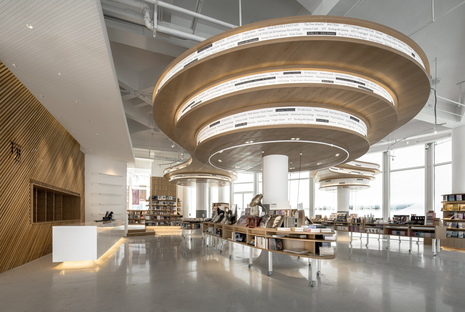 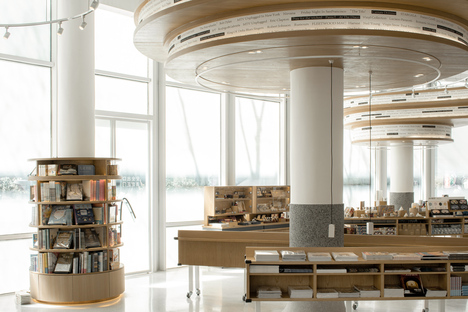 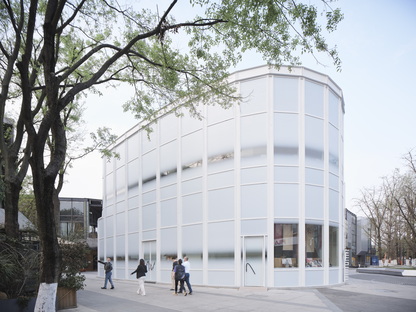