The conservatory of music and dance designed by Atelier Novembre becomes a filter between two very different worlds, with a protected nature park on one side and the buildings of the city of Orsay and pavilions on Paris Sud University campus on the other. 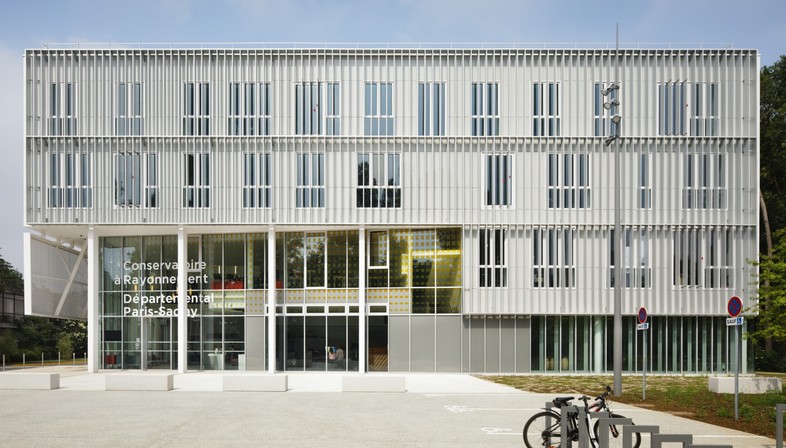 April saw the inauguration of the Conservatory of music and dance in Orsay, designed by architectural studio Atelier Novembre and built near the Paris Sud University campus.
The selected lot is in an area on the boundary between the city and its natural surroundings, bordered on one side by the Yvette River and a protected nature park, Launay Botanical Gardens, and on the other by the first buildings and other constructions in the city of Orsay and the pavilions of the university campus. The beauty of the location inspired the architects, and their ecological approach and attempt to make the most of the natural setting became the key elements of the project. Seen in terms of reorganisation of campus space, the Conservatory provides the university campus with a new “gateway”. 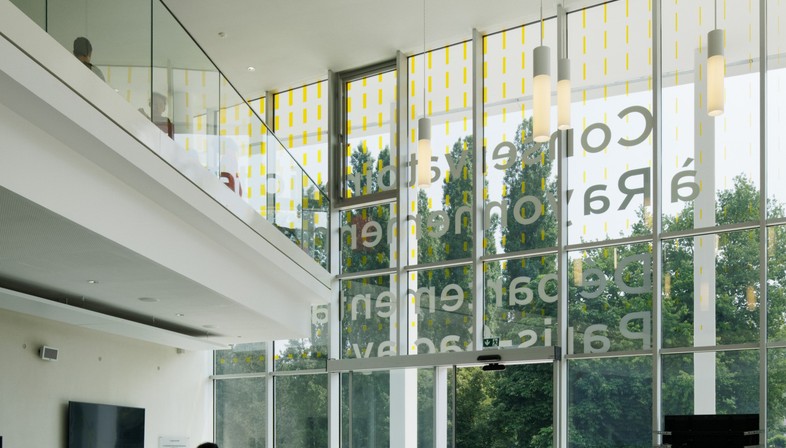 The Conservatory has an entrance hall, a 300-seat auditorium, rooms for instruction in the theory and practice of music, dance and theatre, and of course offices and utility areas.
The quality and wealth of the site, and above all the presence of prominent natural elements such as the park and the river, determined the choice to build a construction that opens up to its natural surroundings and is therefore largely transparent. The architects designed a façade with big windows to establish ongoing visual dialogue between nature in the park and river and the architecture. It is not a monolith, but a fragmented construction, a porous complex that enhances its surroundings by creating a sequence of different views and panoramas between and through the buildings in it. The conservatory does not consist of a single building, but is a complex of different volumes, acoustically optimised for their intended functions, responding perfectly to the need for spaces of different sizes and heights for instruction and rehearsal in different artistic disciplines. 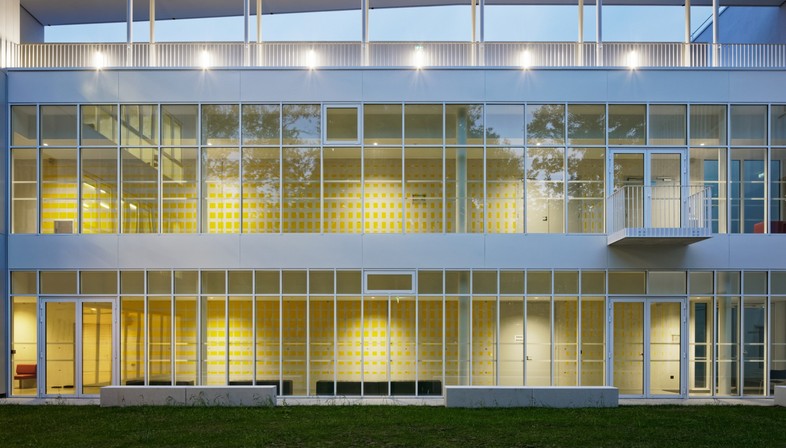 The architects organised the volumes by distributing them along the main axis of the building. The main building, open to the public, forms the gateway to the lot, containing a hall two floors high, a brightly lit, welcoming space organised so that users can immediately understand its internal layout and flexible enough to host different kinds of exhibitions and initiatives. The two upper levels are dedicated to the teaching of music, including rooms for individual lessons. The dance and drama building is built symmetrically to it, while the ends of the distribution axis contain rooms for group rehearsals, with a direct view of the park on one side and the auditorium on the other. The auditorium is definitely a key part of the project: an essential space for group rehearsals and performances, designed to be suitable for a variety of different events. Its presence is declared by the shape of the building visible along Rue Jean Teillac, instantly declaring the complex’s cultural function to passers-by.
The architects have taken great care in the design of the spaces for circulation, another important element of the project; in a conservatory it is indispensable to provide wide passageways permitting students to carry bulky musical instruments, and to design the signage in the building using bright colours and simple geometric shapes to mark different routes. 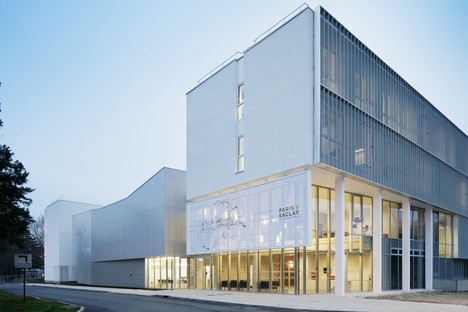 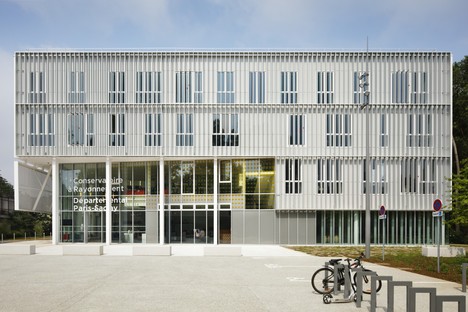 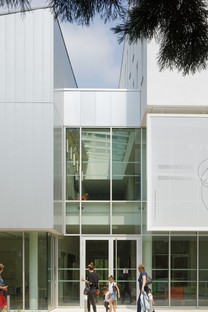 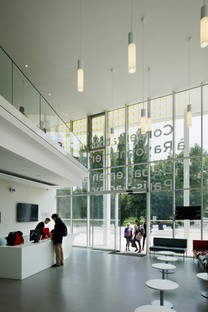 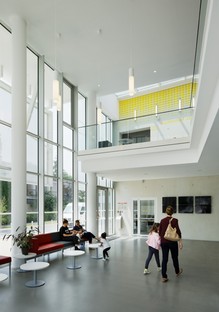 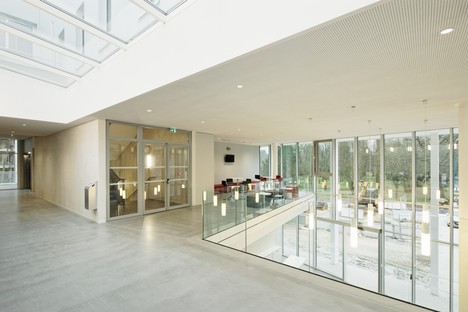 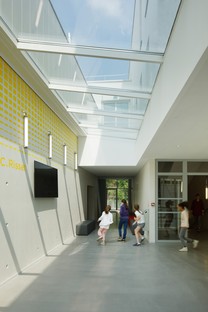 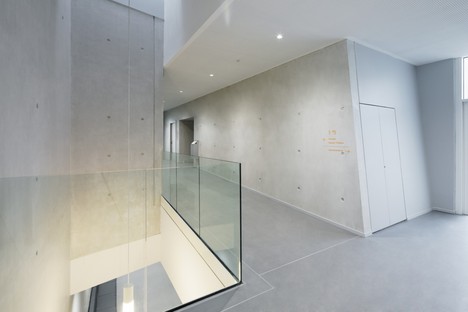 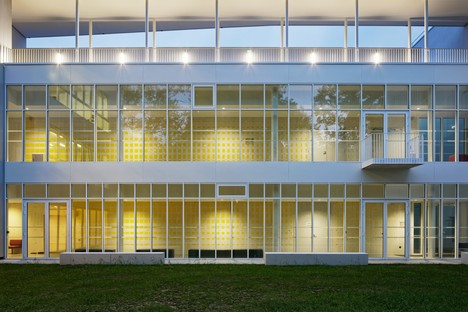 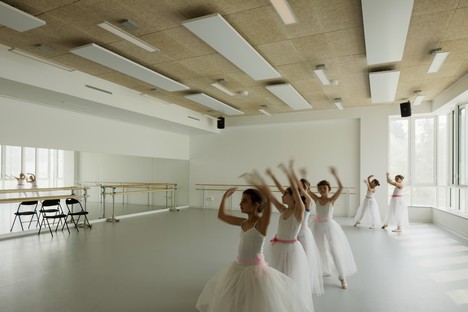 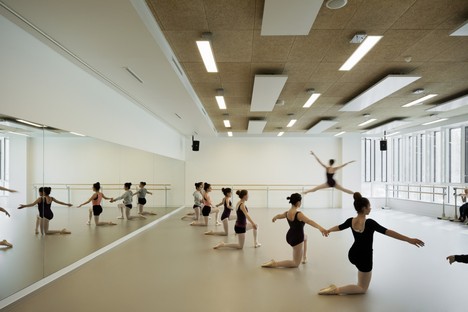 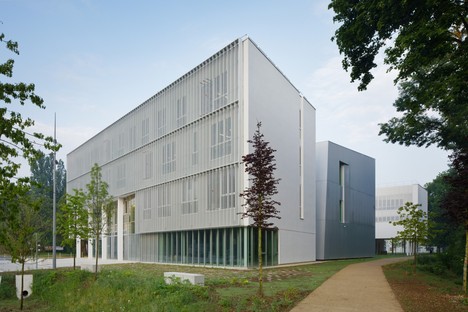 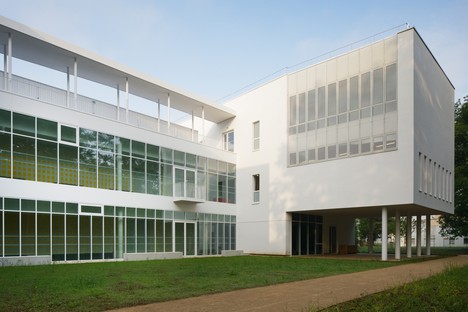 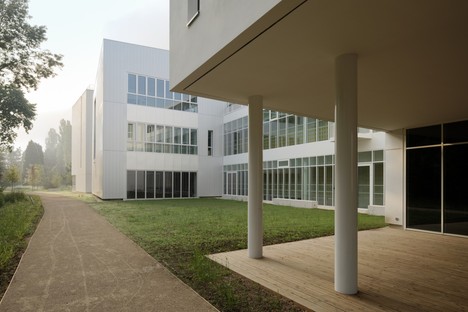 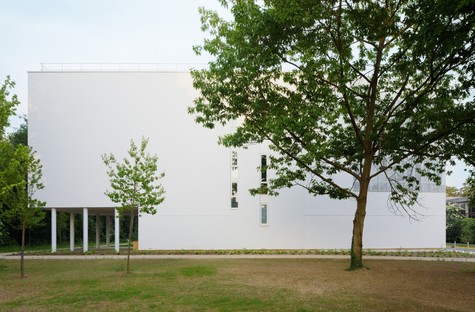 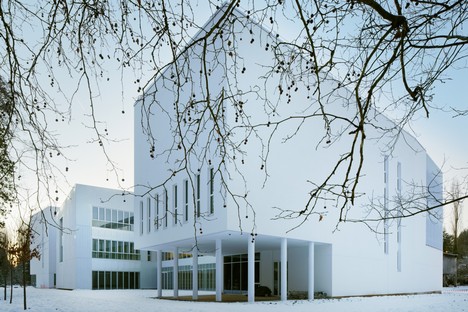 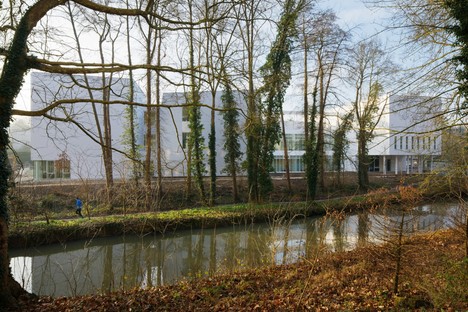 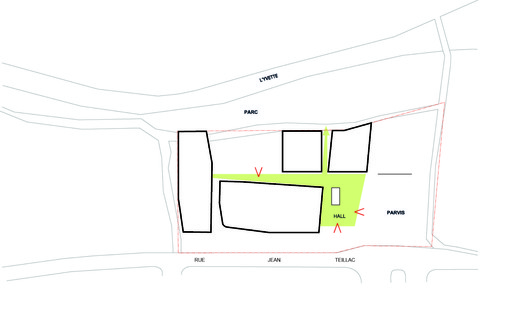