Indian architect Abin Chaudhuri convinced his client to open a community centre in place of a private garage. The new Gallery House in Bansberia, in West Bengal, is a civic building inspired by Hindu temples with their traditional terracotta decorations. 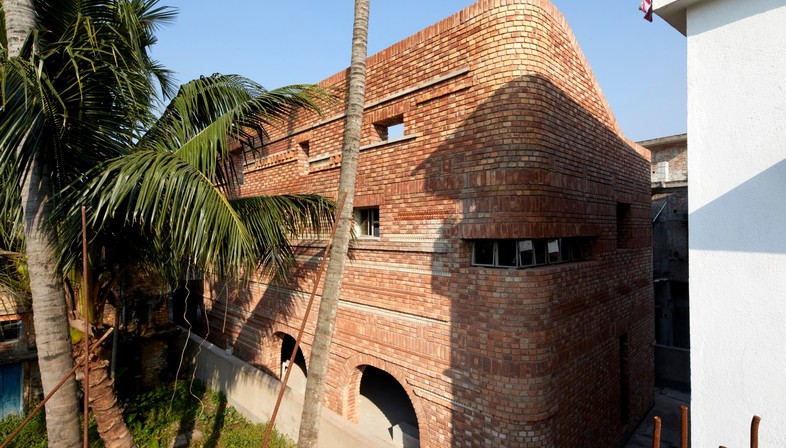 Abin Chaudhuri, who founded the studio that bears his name in 2005, sees architecture as a process of non-stop research and discovery of all forms of harmony between the social aspects of existence.
His studio, based in Calcutta, employs an approach based on listening and continual adaptation to circumstances: a vision that turned out to be valuable in the Gallery House project in Bansberia, West Bengal, India. The client’s original intentions were reconsidered, achieving an unexpected outcome that serves a broader purpose.
The project was built early in 2020 for the same client as the Wall House, a 640 square-metre villa in Bansberia covered with Corten steel panelling and travertine slabs, with big windows that attenuate the impact of this fortress-like home closed in on itself. Imposing walls, providing protection and status, give way to a desire for interaction with the city streets.
The client’s new project looked like a simple one: a covered parking garage. The owner of Wall House had already purchased a lot on the opposite side of the street, right across from his home, to store his vehicles and provide temporary accommodations for staff members using them.
Abin Chaudhuri is a sensitive architect particularly aware of context in places such as Bansberia: like many Indian cities, Bansberia has a high population density and a chronic lack of community facilities, places where people can get together and celebrate life in public.
And so the architect offered his client a different idea for the immediate use of the new volume, suggesting construction of a new civic space. Starting with the original plan for the garage, with a large space without walls on the ground floor and more compartmentalised spaces on the upper level, Abin Chaudhuri designed a public building accessible to all which could one day be converted back to its originally intended use.
With this change of purpose, Abin Design Studio no longer looked toward the models of the conventional twentieth-century Indian home, but based his work on expressions of architecture characteristic of community spaces, that is, places of worship. The city of Bansberia is famous for the presence of a monumental site surrounded by water containing two famous monuments, the Hindu-ratna Hansheswari Temple, completed in 1814, and the older Ananta Basudeba, completed in 1679 in eka-ratna style. The complex testifies to the traditional cultural and social values of the people of Bansberia. Landmarks and places of pilgrimage, prayer and observation, the temples may well be the city’s only public meeting-places, where people can spend as much time as they like, enjoying the vast gardens which surround the temples and form a part of the site, offering opportunities for socialising, where people can also contemplate the precious ancient terracotta decorations telling the stories narrated by India’s epic poems. 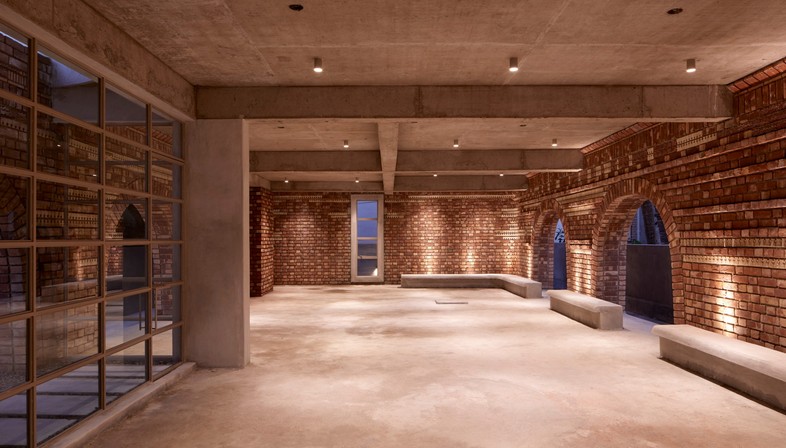 Introducing another form of architecture for the community, the building draws its inspiration from the temples and pays tribute to local craftsmanship of the Bengal region.
Set into a dense row of buildings on the same scale, the new building stands out with its bare brick walls, laid in horizontal strips and decorated with ceramic inserts. The terracotta bricks were purchased from a local artisan’s workshop, though the ceramic tiles are industrially made. Working with a local ceramist, the blocks were reclaimed and inserted in the wall to form a dense multiple texture inspired by temple ornamentation.
The rounded corners suggest three-dimensional observation of the volume from a point of view like that of a drone, making the Gallery House a building that successfully balances the old and the new. Its form is derived from an approach of continual subtraction, in which the initial prismatic block is transformed into a combination of concrete partition walls wrapped in a layer of brick, made permeable by large openings. The structure appears lightweight even though it is made of materials undeniably linked with the earth and with traditional constructions. The interiors are arranged on two levels leading to a rooftop terrace. At street level, what was originally intended to be a garage contains an entrance foyer and a large multipurpose hall, a single space for hosting various community events and meetings, or for practicing yoga. Beyond the foyer, on the first floor are, in order, a meeting room and training centre with a kitchen, a dormitory containing five beds, bathrooms and a small hanging garden.
The expressive fulcrum of the Gallery House, the foyer might be described as a space of Baroque expressiveness, accessed via a big white concrete staircase beginning almost on the street. Above it, the brick wall opens up in an arch of sculptural design, beyond which we may glimpse the intrados of the upper staircase, cut into the terrace to imitate the shape of the entrance staircase in a passage expressing intrinsic dynamism, which seems to have been designed to accommodate the local community’s processions and celebrations. It’s as if the intention were to invite participants into the hall so they can descend its vibrant staircase.
When seen from the outside, the entrance, the balcony on the opposite side and the white concrete rooftop terrace stand out against the brick walls, creating a “polyphonic” image for the civic centre. The effect of alternating solids with voids greatly lightens the structure, allowing the building to blend in with the public space in the neighbourhood in a gesture of returning space from private ownership to the local community. 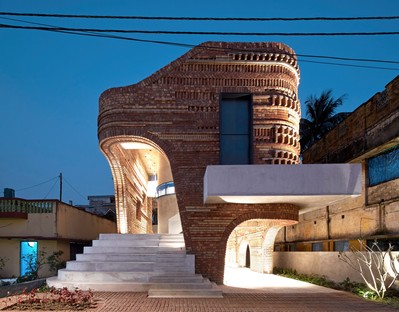 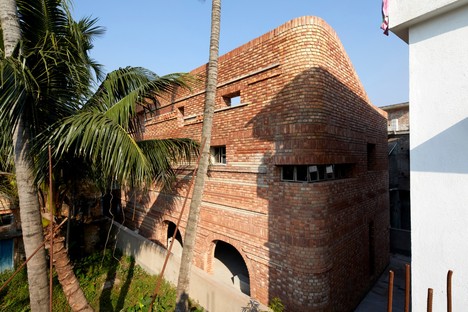 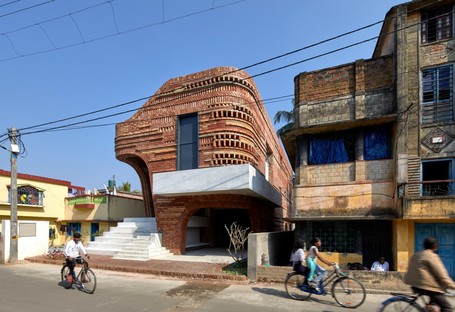 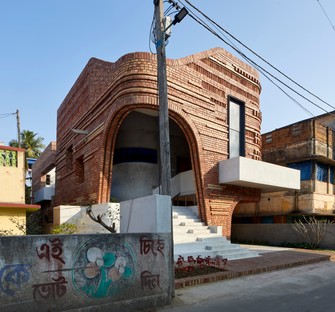 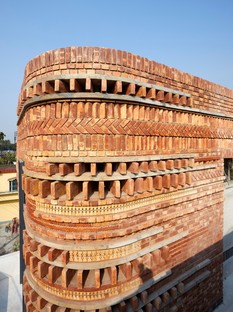 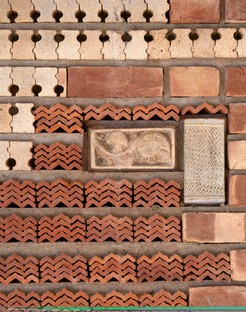 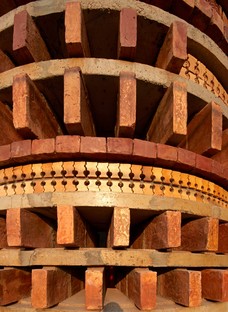 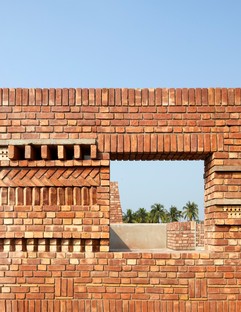 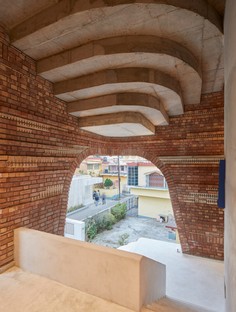 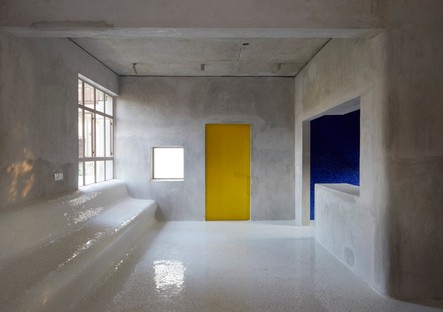 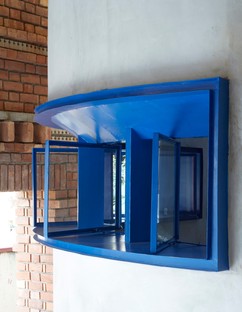 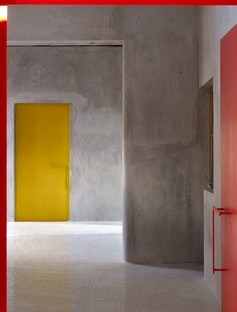 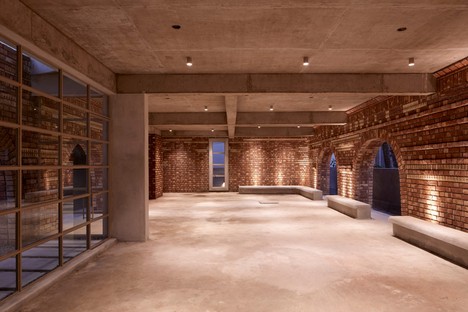 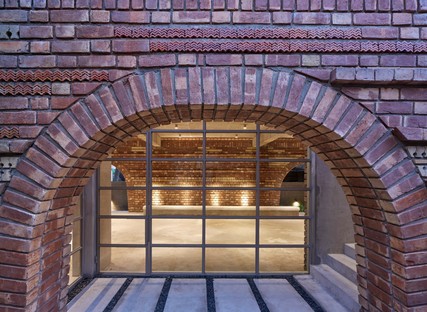 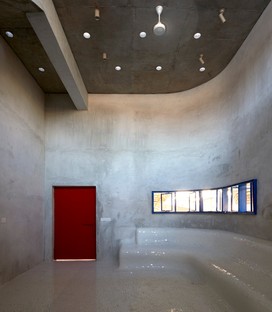 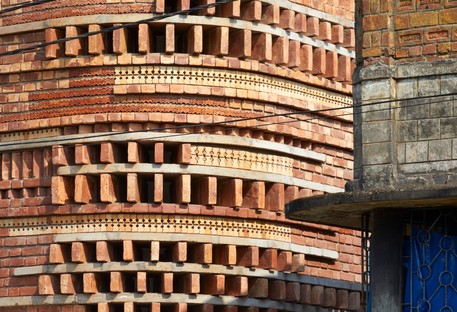 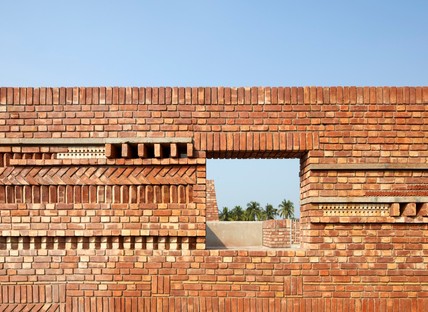 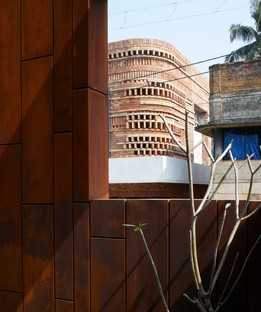 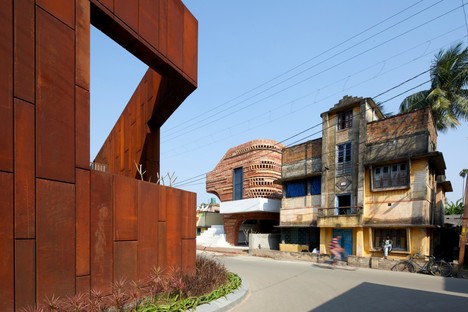 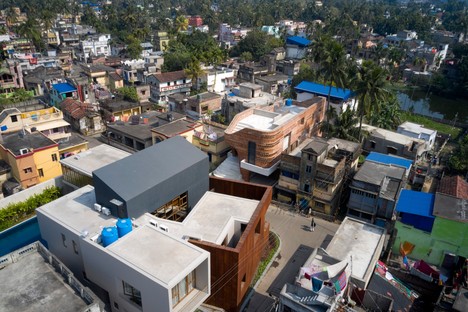 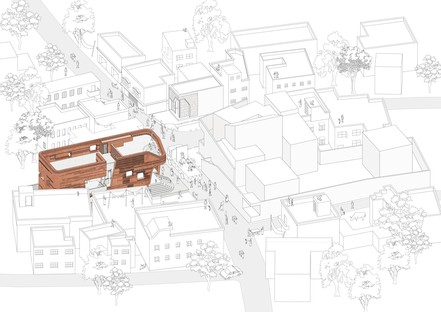 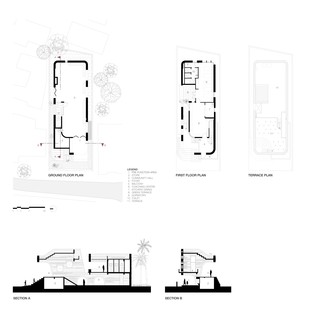 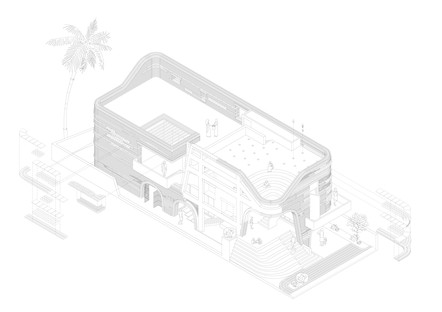 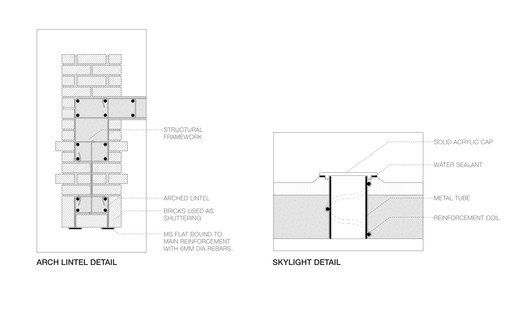