The Architects Series – A documentary on: Powerhouse Company

The latest event in The Architects Series, scheduled for Thursday, September 16, will host the Powerhouse Company international architecture firm and include the projection of a video and a lecture entitled “Level Up Architecture” given by its founder Nanne de Ru. The event will take place at 6.30 pm, live streamed direct from the Iris Ceramica Group showroom in Berlin and involving the company’s other flagship stores in Milan and London. Users can view the event by registering on the Iris Ceramica Group digital platform.
“The Architects Series - A documentary on: Powerhouse Company” is the 18th exhibition format event arranged by THE PLAN magazine for Iris Ceramica Group. On Thursday, September 16, at 6:30 pm, after registering on the Iris Ceramica Group platform, interested users will be able to watch a 30-minute video documentary and attend the subsequent lecture entitled ‘Level Up Architecture’ given by the founder of Powerhouse Company, Nanne de Ru. The event will be live streamed direct from the Iris Ceramica Group showroom in Berlin and involve selected guests attending in the other flagship stores in Milan and London.
Powerhouse Company is an international architecture firm based in Rotterdam, founded in 2005 by Nanne de Ru and Charles Bessard. With satellite offices in Oslo, Beijing (China) and Monaco (Germany) and a team of around 100 professionals, the firm is still led by Nanne de Ru together with Paul Stavert, Stijn Kemper, Stefan Prins, Sander Apperlo and Johanne Borthne. Over the years, Powerhouse Company has established itself globally as a dynamic and multidisciplinary organization, with projects completed in many countries - Denmark, Netherlands, France, Germany, France, Cyprus and China -, receiving major awards and prizes, including the Rotterdam Maaskant Prize for Young Architects in 2011, the Dutch Design Award in 2008 and the NAi/AM Award in 2008.
From a design point of view, Powerhouse Company believes that the concepts of 'aesthetics' and 'function' are intrinsically linked. Disciplines like architecture, interior design and product design must interconnect and influence each other to create architectural solutions that can improve people's quality of life.
The firm has always worked on a wide range of projects: from public structures like railway stations and schools, to workspaces, condominiums and private residences.
Among the most interesting references is the recent Loop of Wisdom project, the technological museum and information center of a new district of Chengdu (China), which has become an iconic structure thanks to a long red walkway that follows the contours of the whole site and is free to use for all its inhabitants.
During the ‘Level Up Architecture’ webinar, Nanne de Ru will not only retrace the history of the firm but also talk about the centrality of the customer’s role. As Ru himself says, “great architecture needs a great architect as well as a great customer. Every iconic building I know, from the Beurs van Berlage in Amsterdam to the Mies van der Rohe Seagram Building in New York, had an honest, powerful and farsighted customer who had at least as much influence on it as the architect. You can't have a great building without a great customer’. It will also deal with the changes affecting the figure of the architect and what opportunities they provide to design the architecture of the future.
To participate in the webinar The Architects Series – A documentary on: Powerhouse Company”, please register via the following link: 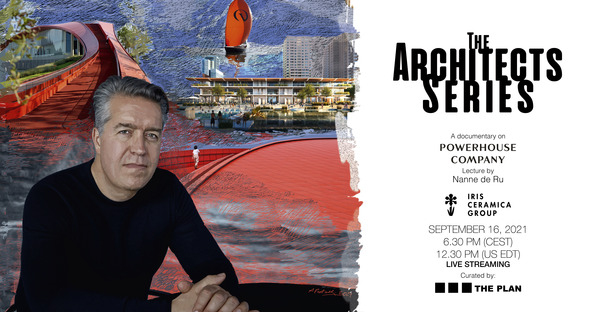