The Architects Series - A documentary on: AMDL CIRCLE

On 8 July, the new appointment with The Architects Series, dedicated to major contemporary architecture firms, will be hosting ADML CIRCLE, the firm founded by Michele De Lucchi, with the video screening and lecture “Inspiring Creativity”, held by Michele De Lucchi and Davide Angeli. The webinar will be streamed live from 18.30 from the Iris Ceramica Group showroom in Milan, with the participation of the company’s other Flagship Stores in London and Berlin. Users can follow the event by registering on the Iris Ceramica Group digital platform.
“The Architects Series - A documentary on: AMDL CIRCLE” is the 17th appointment in this exhibition format, curated by THE PLAN magazine for Iris Ceramica Group. On Thursday 8 July, from 18:30 to 20:30, by registering on the The Plan digital platform, you can watch the video-documentary, lasting 30 minutes, followed by the lecture covering the extraordinary career of Michele De Lucchi and his firm, which since 2019 is called AMDL CIRCLE. The webinar will be streamed live from the Iris Ceramica Group showroom in Milan, with the real-time participation of the other company flagship stores in London and Berlin and a group of selected guests who will have the opportunity to intervene and talk with the stars of the conference.
Internationally renowned designer, architect and artist, Michele de Lucchi has been one of the big names of avant-garde architecture and design currents since the 1970s. Today he heads AMDL CIRCLE, the multidisciplinary design firm renowned for its humanistic approach to architecture, design and graphics. The video-documentary includes the contribution of the Circle Director, Angelo Micheli, the International Business Director Davide Angeli, the head of Produzione Privata Pico De Lucchi and the architect Sara Casartelli.
After graduating in architecture in Florence (1975), Michele De Lucchi worked as an assistant to Adolfo Natalini, thanks to whom he came into contact with radical and experimental design movements including Cavart. In 1979 in Milan, he met Ettore Sottsass, who introduced him to the Memphis group and encouraged him to open his own firm (1980). Sottsass also introduced him to Olivetti, where De Lucchi held the position of Creative Director until 2002,
His creativity, inclination for experimentation and unceasing research have led Michele De Lucchi to design furnishing elements for major Italian and European brands, receiving a number of major awards including the Golden Compass in 1989 for the Tolomeo lamp produced by Artemide (a global best-seller) and in 2001 for the printer Artjet 10 designed for Olivetti.
In 40 years of activity, the firm has created iconic architectures including the UniCredit Pavilion in Milan, the Pavilion Zero for Expo 2015 in Milan, the Palace of Justice in Batumi and the Bridge of Peace in Tbilisi, Georgia. It has designed buildings for the hotel sector in China, Georgia and Japan, as well as museum spaces for institutions including the Triennale di Milano, the Cini Foundation in Venice, the Neues Museum in Berlin and the Exhibition Centre in Rome.
In 1990 the firm inaugurated the laboratory Produzione Privata, to design and create non-commissioned experimental objects with full freedom of expression. Moving away from the concept of standardisation, the products are created using traditional craft techniques. The laboratory has seven ‘workshops’, each devoted to a material or design concept: glass, wood, metal, marble, ceramics and porcelain, ready-made and minimal machines.
Since 2018, AMDL CIRCLE has focused on the research project Earth Stations, imaginary buildings in which architectural know-how is pushed to its full technological, aesthetic and functional potential, approaching a vision where sustainability, well-being, health and happiness are within reach of all the earth’s inhabitants. According to the Earth Stations philosophy, an architect does not merely design the shape and colours of a building but above all the behaviour of the people who will use it.
True to the concept of evolution and change, in recent years the firm has developed towards a new existence. Through the idea of the Circle, Michele De Lucchi has given a fluid and horizontal orientation to the organisational structure, giving more space and creative freedom to young professionals. This choice was dictated by the desire to transmit a wealth of experience and culture to other people, allowing them in turn to continue the process of growth and development in the world of architecture.
To take part in the webinar “The Architects Series – A documentary on: AMDL CIRCLE” you must register at the following link:
https://attendee.gotowebinar.com/register/1955382889477133839
Participating architects can obtain 2 professional training credits.
WEBINAR:
08 July 2021
18:30 / Welcome and screening of the video-documentary “The Architects Series – A documentary on: AMDL CIRCLE”
19:15 Lecture: “Inspiring Creativity” with Michele De Lucchi and Davide Angeli 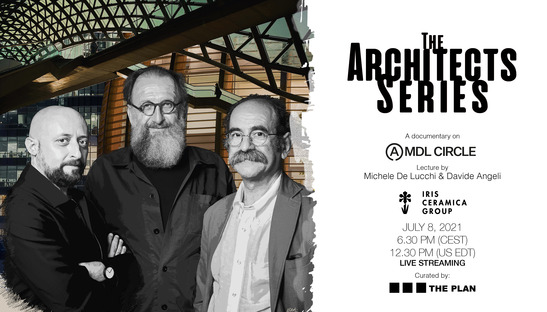