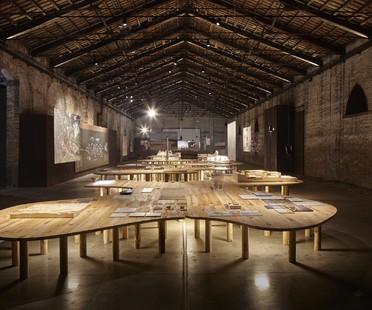 The last day at the Italian Pavilion at the 2018 Biennale di Venezia Architecture Exhibition features round tables and book launches summing up the issues that have emerged in the course of the Italian pavilion’s “voyage” of exploration of the country’s interior. 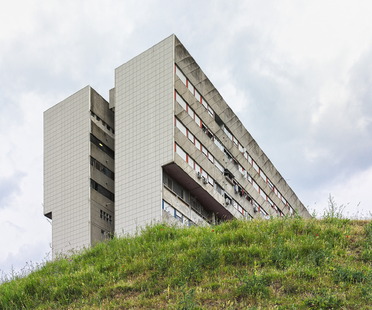 The grey concrete sinks into the green of this suburb built in instalments, the chaotic cityscape is replaced by a more rural atmosphere, made up of fields, of exposed building sites and of isolation. This is the memory that people who have lived their lives at Corviale take with them, and it is what the photo-reporter Alessandro Guida aims to document in his photographs.  The “Kilometre” was supposed to be the answer to the housing crisis in Rome in the 1970s; at the same time, it intended to bring together individuals and the community under a single roof, complete with all the services needed. Unfortunately, the project was never completed, leaving this part of the city alone and isolated. Stories of substance addiction, drug dealing and squatting made Corviale a place to avoid. It was cut off from the rest of Rome, and this also ended up causing the isolation inside Corviale and of the people who lived there.  The image of stiff formality of this mammoth piece of architecture, along with its modularity, so rational that it locks the residents inside, is obvious in Guida's work: not one, single person appears in his photographs, and yet we are talking about a complex that is home to about 6000 people. He raises the sense of alienation to maximum levels.  However, the photographer's work also intends to show another side of Corviale. At first glance, its present state of disrepair and decrepitude is clear, but at the same time the power of these architectural spaces reference the project's utopian nature, also expressed in the impressive magnitude of the complex and in how the spaces are organised.  Still, the key to interpreting Alessandro Guida photography project is change. Documenting the Corviale's present state of decay can shine some light on what it was and what it could have been. This awareness, which is perhaps the luck of our times, always helps give value to the past. After living here as children, there are people who have returned to initiate redevelopment projects, to fend for the architecture, but also to help create new social ties or revive old ones.  Many initiatives have been rolled out, some get the kids off the streets with a football school, others are art collectives that organise community events. Corviale is slowly rising from the ashes, and it is also because of work like Alessandro Guida's photography project, which brings us face to face with reality, that drives us to want a better future, for the architecture and for the people who live there.  Barbara Esposito Photographer's website: http://www.aleguida.com/ Collective photography website Urban Reports: http://www.urbanreports.org/

DYS Design Your Slabs: expressions of style for daily living