Transmitting, through architecture, the urban atmosphere of a city like New York, together with the idea of speed and rhythm, of the grit needed to practice and succeed in sports, but also to face everyday life: these are the key concepts of the project designed by the SRG Partnership architecture studio for the NYC Garage at the Nike World headquarters in Beaverton, Oregon. 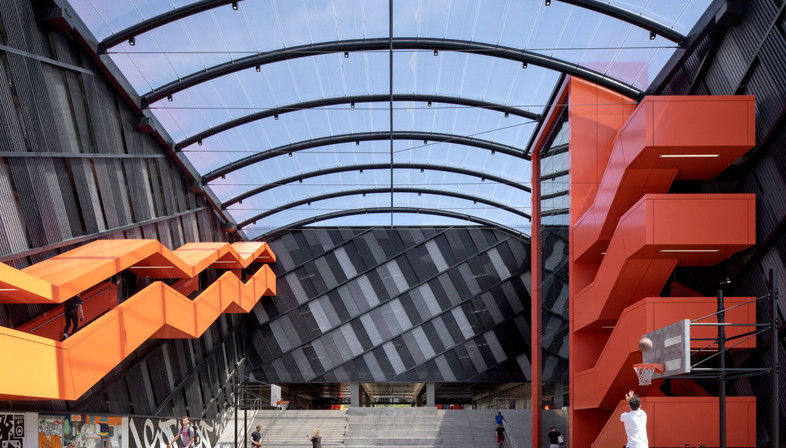 The project developed by the SRG Partnership architecture firm for the NYC Garage contains general references to the values and key concepts of the Nike company, facility that accommodates 1,194 parking spaces for employees and visitors of the Nike World Headquarters in Beaverton, Oregon in the United States. The building is a dynamic structure designed to complement the Nike campus, innovating the very idea of a multi-storey garage. The main function of the NYC Garage, that of offering an efficient and safe car park, merges with a dynamic space that promotes the practice of sports, not only in a competitive key, but above all as an opportunity for recreation, informal meetings and social interaction.
The urban atmosphere of a city like New York, together with the idea of speed and rhythm, of the grit needed to practice and succeed in sports, but also to face everyday life, are the key concepts eloquently expressed by the SRG Partnership studio through the architecture selected for the new garage. 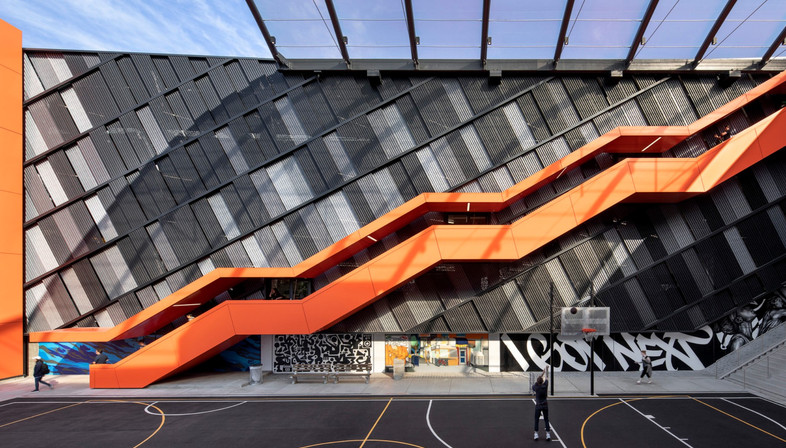 The structure, which covers a space of about 80,000 m2, consists of several bays designed for parking cars, emphasised by the sloping roofs and the different orientations of the volumes. The transition between the different bays is highlighted by parts of the volumes covered in bright orange metal panels, visible between the perforated and dark corrugated panels enveloping the façades. Orange is the colour that best characterises energy and activity, also selected by the architects to emphasise other key elements such as the entrance ramp used by vehicles or the stairs and the elevator shaft, clearly visible from the main courtyard. The outdoor courtyard – the signature space of the NYC Garage – is situated between two volumes of the garage and partly covered by a transparent structure that ensures optimal lighting. This space is used as a pedestrian entrance to the garage, but also for meetings and special campus events. Moreover, the courtyard has also been designed for sports activities that emphasise the “urban” character of the complex, with staggered baskets and marks on the floor for playing a wide range of sports, from basketball to wallball and futsal.
To further stress the “gritty and urban” atmosphere of the garage, the choice of materials was complemented by bold graphics, with a series of graffiti commissioned to various artists and with logos and colours distributed across all six levels of the garage and inspired by New York’s big sports teams: the Giants, the Jets, the Knicks, the Nets, the Yankees and the Mets.
For the most part, the bold façades are clad in corrugated and perforated metal panels and feature a custom pattern that spells out Nike's famous motto in Morse code. The panels conceal the presence of cars from view, while their “movement” attributes dynamism to the façades, creating plays of light and shadows that change over the course of the day and based on the light conditions, while at the same time allowing diffused light to penetrate the garage. 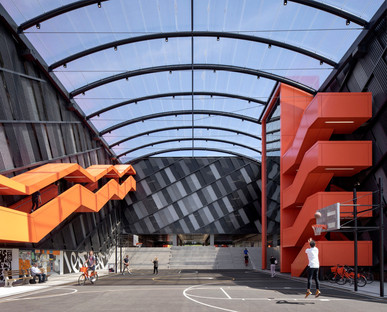 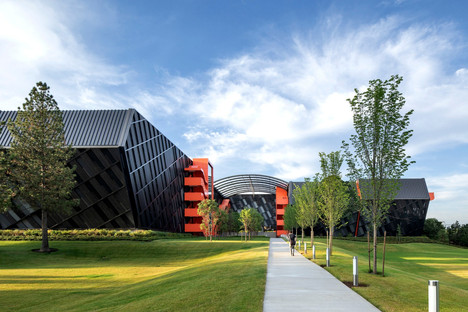 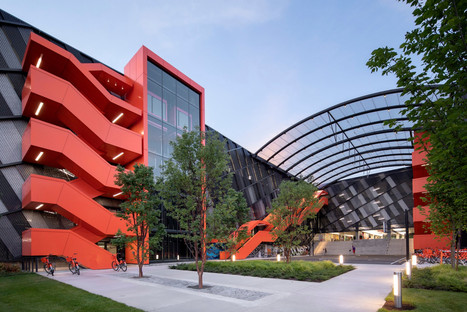 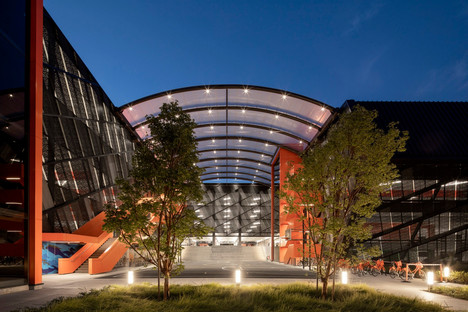 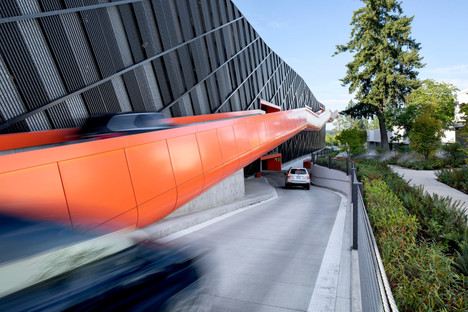 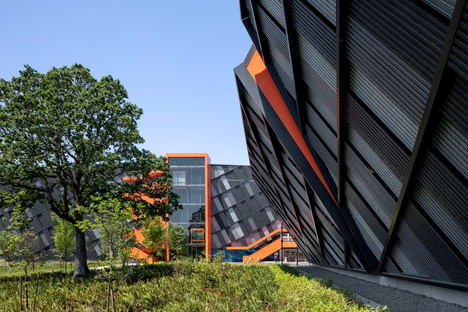 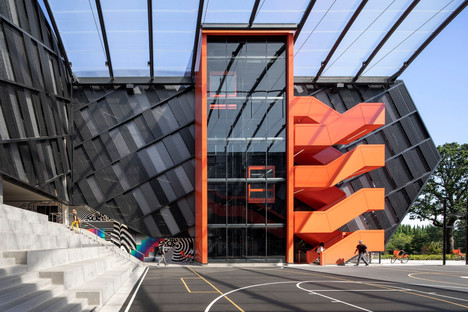 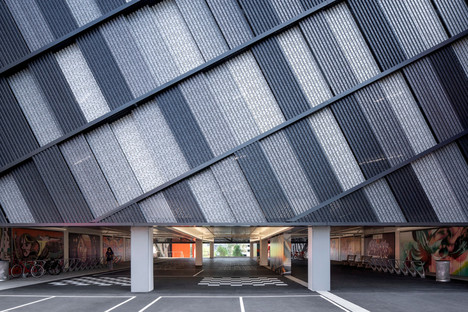 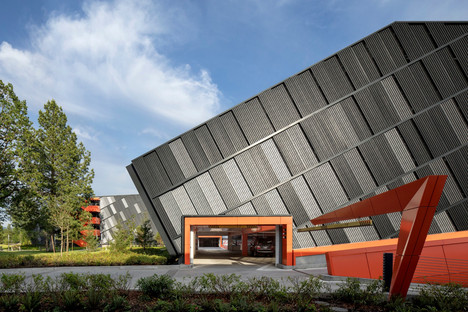 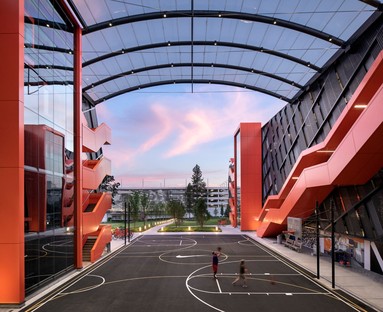 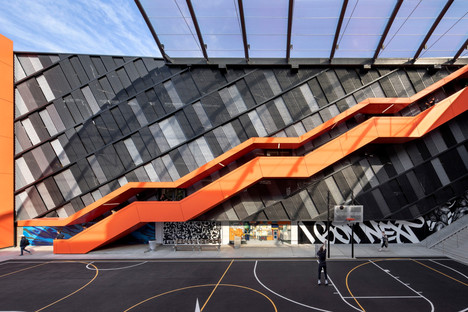