A pedestrian itinerary starting out in the centre of Marseilles, beginning with Norman Foster’s mirror pavilion, and taking us to the outskirts of the city to see Zaha Hadid’s skyscraper. A walk along the city’s converted waterfront, a wide-ranging urban project including buildings and public spaces. 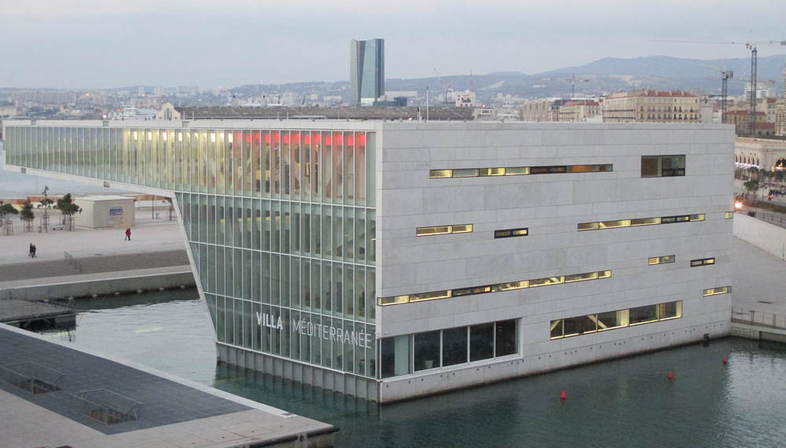 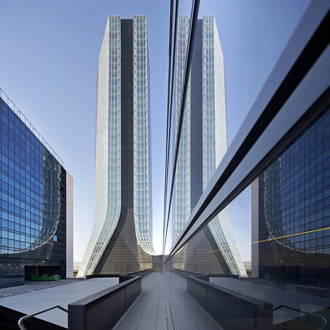 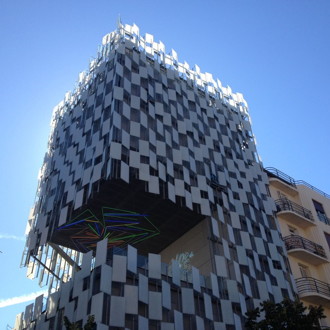 A pedestrian itinerary setting out from the centre of Marseilles, starting at Norman Foster’s mirror pavilion, and taking us to the suburbs to see Zaha Hadid’s skyscraper. The two award-winning London architectural studios have made their mark on either end of Marseilles’ waterfront, while other architectural studios, primarily Italian and French, have worked on what lies in between: a wide-ranging urban redevelopment project including both buildings and public spaces.

The mirror pavilion: Norman Foster
It is one of architect Norman Foster’s best and most sensitive, artistic works. The optical effects it creates recall the most refined projects of the seventies. Anyone who looks at the pavilion or walks underneath it feels slightly dizzy, as if magnetised. The key feature of this building is the mirror finish on the steel roof, completely open on all sides and supported by slender duplex stainless steel columns. The simple steel structure thins out toward the edges, reducing the visual impact of its profile to a minimum.

The waterfront: Michel Desvigne and Fernand Pouillon
On the waterfront, on the other hand, French landscape architectMichel Desvigne, whose sober work maintains a link with the past and the city’s historic identity as a port, and architect Fernand Pouillon, with his arches and stone coverings, classical and even somewhat anti-modern, surprise us if we realise they are contemporaries of Le Corbusier’s l’Unité d’Habitation.

Fort Saint-Jean
Before the Pharo and the archipelago of Frioul, where the Count of Montecristo was imprisoned, is Fort Saint-Jean, a beautiful fortress built by Louis XIV in 1660. On J4, the wharf across from the fort, no longer an active part of the harbour, two buildings now stand which are the city’s pride and joy.

MuCEM: Rudy Ricciotti
MuCEM, the Museum of Civilisation of Mediterranean Europe, by architect Rudy Ricciotti, seduces the viewer with its extraordinary decorative mechanism, interacting with the sea through its metallic materialism. MuCEM also has two bridges linking it with the old city: one stretching from MuCEM to Fort Saint Jean, over a body of water, and another arching over an urban freeway. With its dark filigree, the panoramic ramp wrapping around it like an industrial silo, its weight-bearing structure looking like a dark forest and its rooftop sundeck, MuCEM looks like a mirage from far away, though from close up it appears to be just what it is: a magic box, the true star of the scene.

Villa Mediterranee: Stefano Boeri
Stefano Boeri’s Villa Méditerranée stands out for the considerable overhang of the top level, extending out over a small body of water below, which is thus kept in the shade at all times. It is a congress centre that symbolically brings the city into contact with the water in the grid of girders supporting the overhang. Villa Méditerranée has more in common with the tectonic solidity of Fernand Pouillon’s constructions on the top of La Tourette promontory and along the west bank of the Vieux-Port than with the fragile embroidery of the sunbreak of the building beside it, Rudy Ricciotti’s MuCEM.

Les Docks: 5+1AA
This is the name of an amazing warehouse. The project by Genoese studio 5+1AA, led by architects Alfonso Femia and Gianluca Peluffo, transforms a nineteenth-century port warehouse into an innovative social, cultural and commercial district. The renovated ground floor, courtyards and cellars over 400 metres long now contain offices, showrooms, restaurants and lofts, in the typical scheme so often seen in urban gentrification projects.

Silo d’Arenc: Eric Castaldi
A monument of industrial archaeology, the former grain silo built on stilts has now become a cultural centre based on a project by Marseilles architect Eric Castaldi: it is the metal structure that prevails here, a nostalgic assembly of the times in which it was built. The concrete building contains a 2000 seat theatre inspired by the Olympia in Paris, designed by architect Roland Carta.

FRAC: Kengo Kuma
Not far from the Silo d’Arenc is a façade-building by Japanese architect Kengo Kuma with an almost intangible appearance. Designed especially for Frac, the cladding on the famous Japanese architect’s building underlines and reinforces the institution that preserves the biggest public collection of French contemporary art. Inspired by that most symbolic work of architecture, Le Corbusier’s Unitè d’Habitation, the project proposes a series of floating pathways and spaces linking different functions, opening onto panoramic terraces, forcing the spatial concept and adding to the contrast between compressed and dilated spaces. A museum, a conference hall, a documentation centre, an office and a bar are the programmatic functions volumetrically broken down into a lower volume and a tower overlooking the square. The whole is given homogeneity by 1500 pixels of recycled enamelled glass, all different in shape to underline the plastic effect of the façade and create differences in the way light is refracted, forming a three-dimensional configuration.

CMA CGM: Zaha Hadid
CMA CGM tower by architect Zaha Hadid is a true lighthouse, or perhaps a big tooth, concluding the city of Marseilles’s ambitious urban redevelopment programme. Though it may not appear to be one of the best works of the architect, whose once futuristic style has become rather academic over the years, the building is located in a strategic position and the tower is inspired by the flowing shape of the urban highway beside it. The building is divided into two parts: the skyscraper itself and the annexes at its base, and it can contain up to 2 thousand and 700 people. Movement and fluidity are introduced to the design of the tower through vectorial generation rising gradually from the ground to converge and fold over towards the top. The volume is broken into vertical segments and differentiated through alternating use of light and dark coloured glass; its skin widens and separates to incorporate the structural columns around its outside. 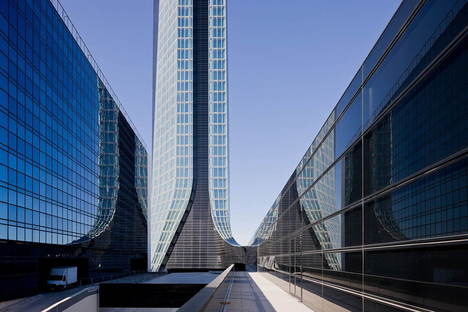 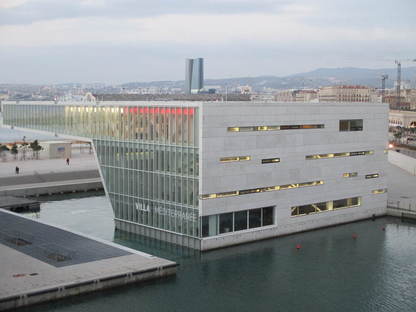 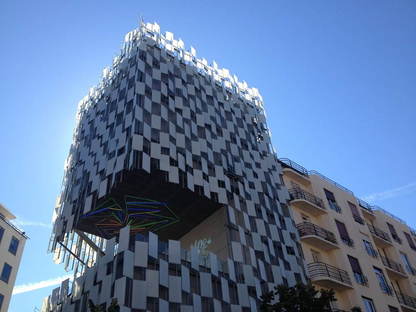 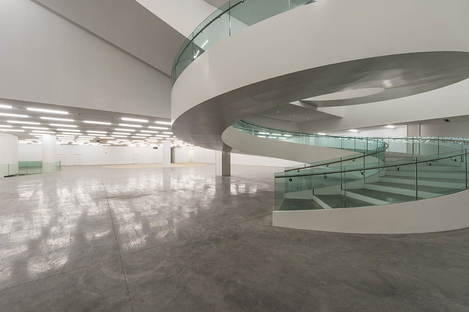 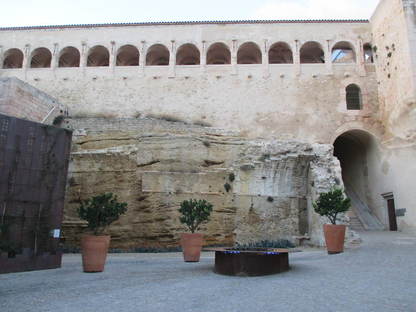 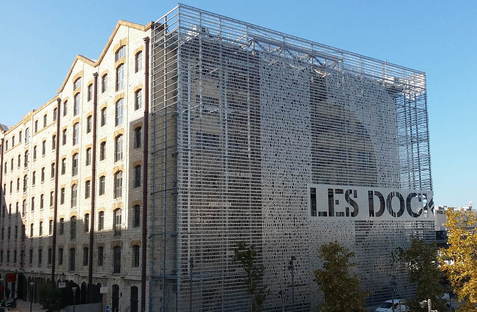 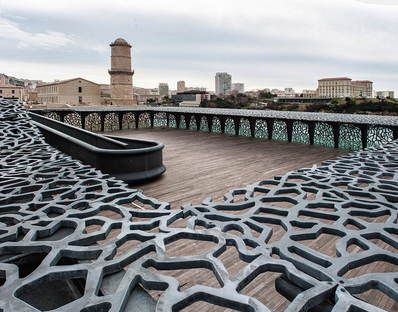 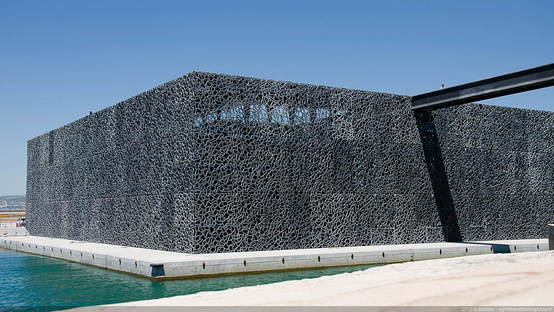 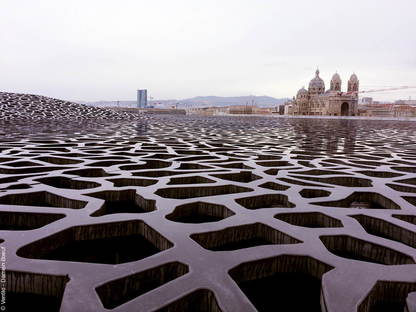 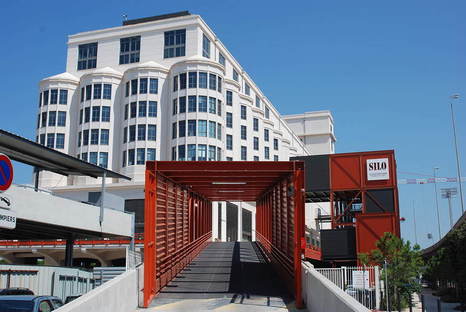 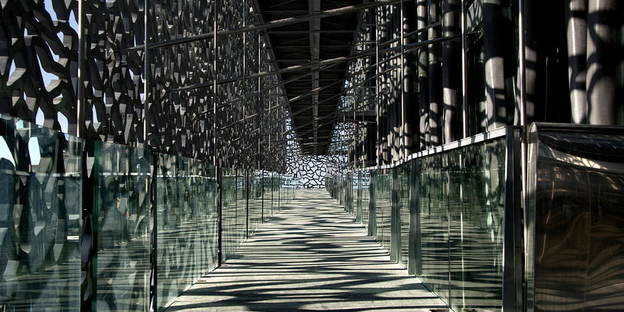 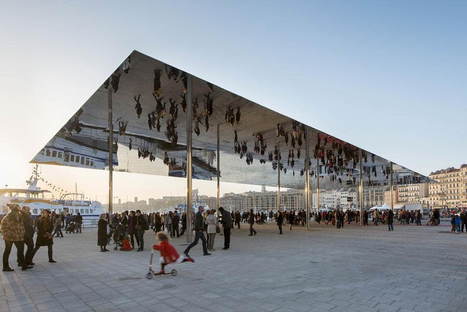 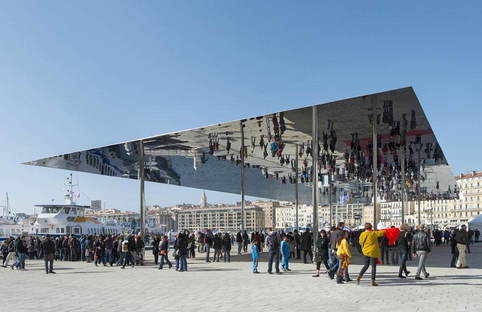 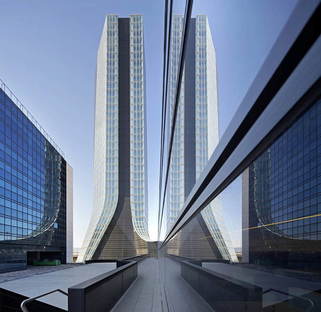 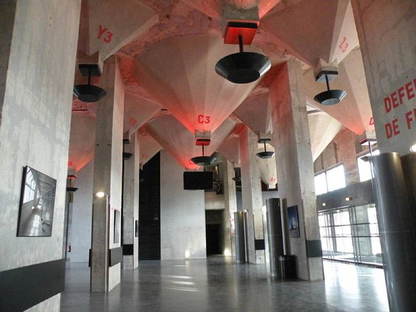 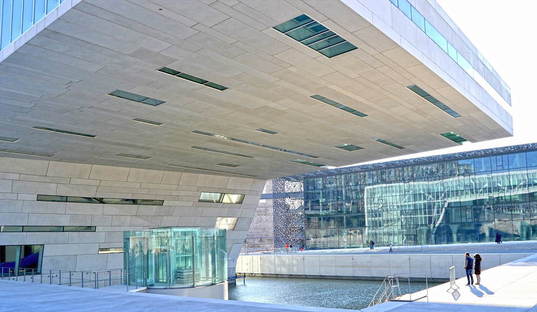 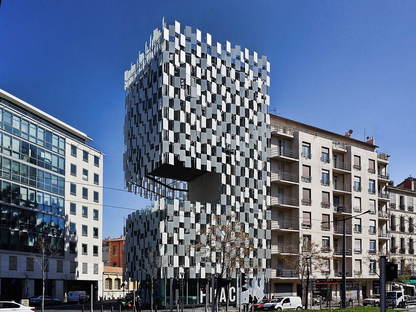 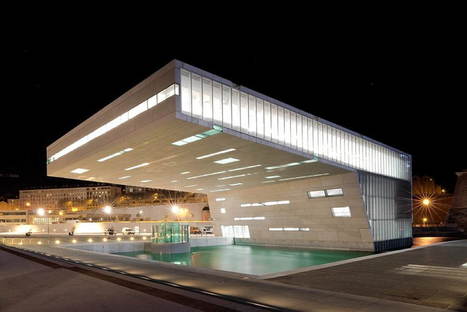 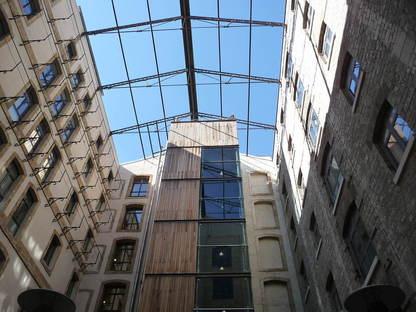 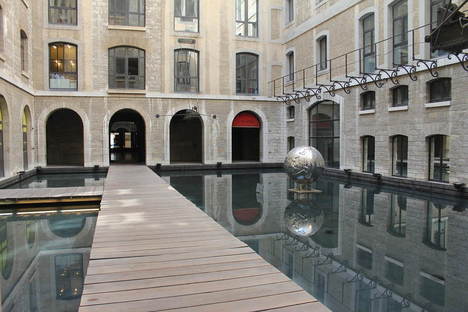 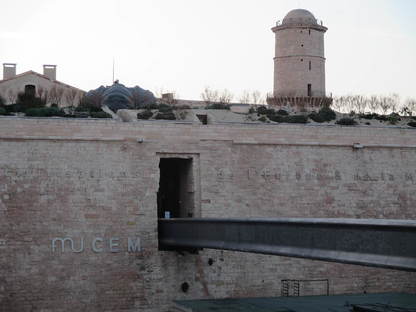