Places that breath new life, acquiring a new meaning and offering new functions, different from those they once embodied. 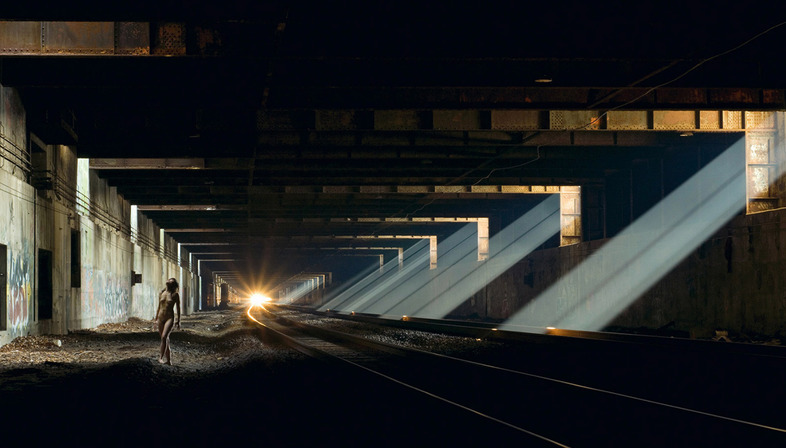 The scars of a city may seem to some useless and insignificant but for others compose the fragments of an extremely intriguing narrative, endowed with a real magnetizing force. They represent pauses of absolute silence that impose a reflection: they remind us of the passage of time; located between life and death, they inevitably push us to reflect on the precariousness and transience of our existence. They dissociate themselves from the type of narrative of our deterministic society, which would rather offer an answer for everything, emanating the same emotional vibes of painting and poem of Romantic artists.
The atmospheres, slightly muffled by a halo of oblivion, appeal to our imagination and it is not a coincidence that many of us, especially myself, would love to indulge in their empty cavities, invaded by roots and webs, eager to explore their intimate recesses, feeling caressed by a pleasant sense of familiarity with remains that we wish would not disappear forever, but at the same time, not be desecrated by careless and disrespectful hands.

Renowned Korean-American artist, Miru Kim, in her series, ‘Naked City Spleen’, escapes her fears of isolation and alienation provoked by contemporary cities corrupted by commodification, exploring hidden and derelict urban spots, that transmit to her a sensation of regeneration and unrestraint. Attracted almost obsessively to the underground and the decaying industrial world, she seems to find refuge and protection in the vastness of silent spaces, which for a long time now don’t share the fetishism of production and consumption, that pollutes and suffocates our existence, affecting human and social relationships, not distinguishing between material and spiritual values. Kim, finds in these situations a sense of liberation, she strips down, naked, against the background of ruins, debris and rusted dilapidated structures, raw and bare as her setting, reminding us of the beauty offered by these secluded, neglected realities. According to her, these stages, such as desolate subway stations, tunnels, factories “form the subconscious of the city, where collective memories and dreams reside”, locations that shift from “strange to familiar, from harsh to calm, from dangerous to ludic”. 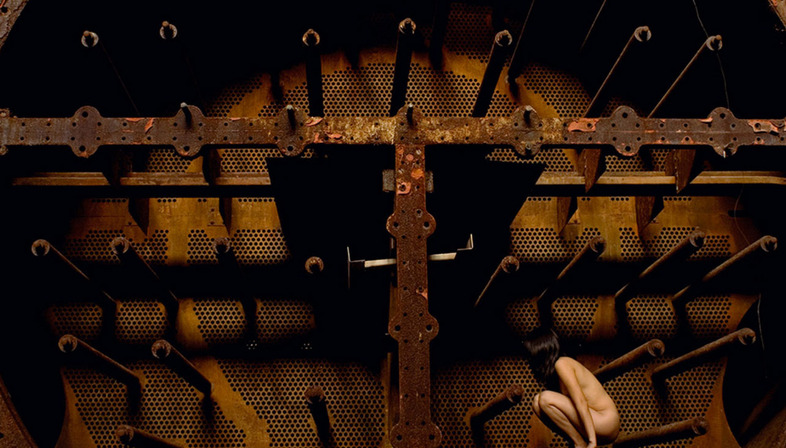 Digging through the wrinkles of particularly chaotic cities, reaching parts that appear hidden but are always within close proximity, we can discover shadowed universes which we wouldn’t even imagine that leave us breathless, treasures that Miru Kim surely hopes would languish in the general indifference, but I would desire, perhaps, someone with a special sensitivity would rescue, helping their superb presences to still be important meeting and interactivity milestones for the community.

Shape-shifters, etymologically referred to those able to change shape and personality, are to me those architects who capable, approaching abandoned, iconic entities, eloquent testimonials of a cultural heritage, to grasp their powerful vibrations, making them blossom again in the respect of their exciting, distinctive shell. As consummate skilled choreographs, they work on a performing platform level, keeping intact the flavor of the compelling hunting fascination of the artifacts, suggesting new perspectives and encouraging a narrative different from what they used to embody, more in tune with current times. "They understand that architecture and its surroundings are intimately intertwined and know that the choice of materials and the craft of building are powerful tools for creating lasting and meaningful spaces." —RCR Arquitectes. 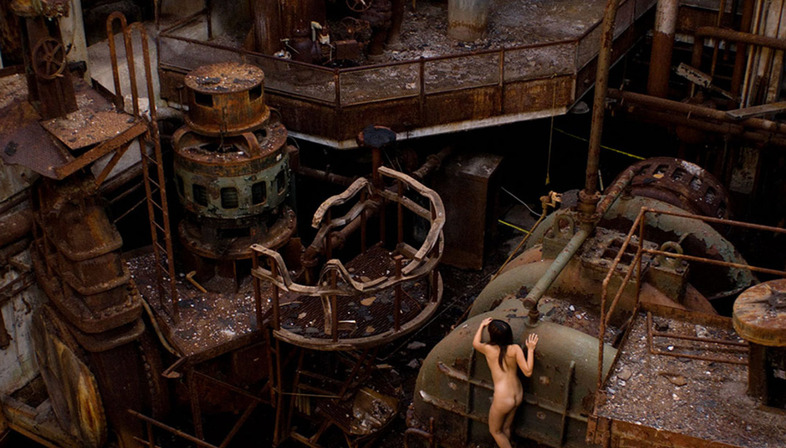 Regenerate, uplift, rejuvenate have been part of the radical dichotomy that for years has seen on two opposite sides contemporary architecture and interventions on the existing. Today the crowded built scenario of our contemporary urban contexts allows no longer architects to create too often from zero and to reinvent what already was there is becoming more and more an urgent constraint. It was, therefore not a surprise when at the 2016 Venice Biennale, the Spanish Pavilion won the Golden Lion for curating ‘Unfinished’, a collection, presented with optimistic voice, of deserted, vacant constructions, remained uncompleted for economic reasons, and subsequently evolved responding to contingent, emerging necessities. The works displayed, ranged from maintenance interventions, adaptive re-use to strategies headed to infuse vital lymph into the cities. ‘Unfinished’ represents the constant evolution and revisionary insemination of past and new, it’s about an identity that transcends but is also always ready to fit to future requirements, at the service of the society and in accordance with the impermanency that urges our architectural horizon.

The appreciation for the charming patina radiating from magnificent, forgotten landmarks has lead today to try not to hide the scars of the passing time but to invent, for their spatial generosity, alternative re-formats, paradigms that would carry the potential to reanimate their ghostly existences. And more convincing will be the narrative that the storyteller will envisage, more synergic will result the connection between people and building. These architects renounce the seductiveness of their own gestures, preferring a silent intervention, that as stitches can ‘suture’ and bridge together parts, guaranteeing two distinct personalities and, at the same time, a kind of functional continuity with the past and a collective memory of a place. 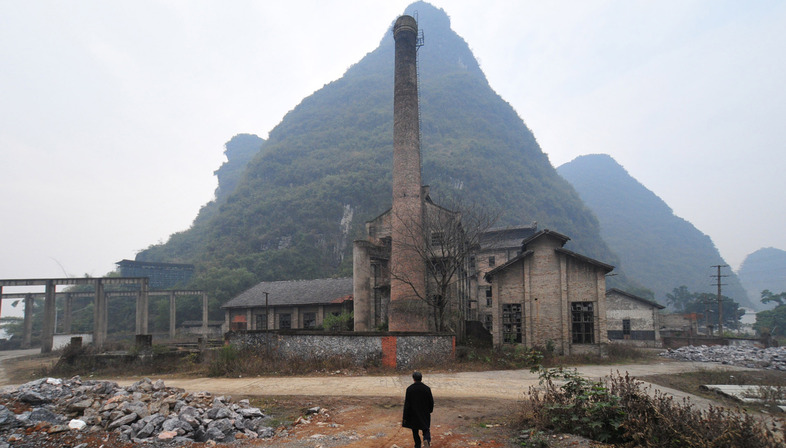 In China, due to the drastic developments cities have faced, what was old and disused too often has been erased and replaced by new and modern. Especially from young ateliers have come a reaction and strong resistance, pushing to rethink massive destruction and urban renewal, towards an architecture in respect of the traces that time has left, giving an uplift to tarnished, vanishing corners. Even if these remains are not always considered strong evidences of an historical heritage, they exude and transmit a familiar, intimate character and avoid the risk to live in a generic, unemotional environment. Vector Architects have always been one of these profoundly convinced assertors of the importance to preserve an ‘old soul’. And we can find recurring with absolute coherence their respectful, gentle touch in all the interventions from small to big. 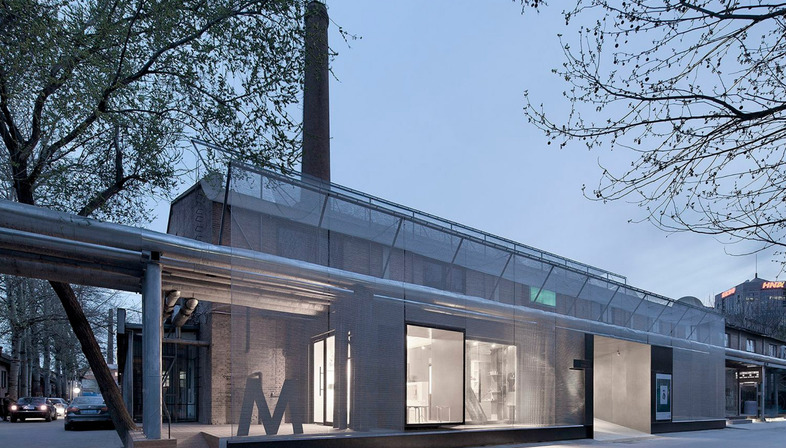 Invited to renovate with new emphasis the entrance of the M Woods Museum, located in the famous 798 Art District of Beijing, implemented since 2014 from an abandoned industrial warehouse, instead of altering the frame, they opted for a slight hint, reference to the industrial expressive codes, that could anticipate and let to sense the original brickwork. Drapes of wire mesh envelope the facade, unveiling with porosity the significant experience that opens up behind, welcoming visitors. Light plays with the translucency of the metal, projecting shadows and reflections that enliven the rigidity of the entrance façade, reaching and brightening even the darkest zones. Parts of the unused spaces outside the building, incorporated under the same metallic canopy, have been unified, aligned and revitalized, organizing public resting areas, playgrounds for kids beside a regular Sunday farmers’ market. The attentive gesture contemplates the relationship between old and new with great sensitivity and revives the cultural block, infusing an energetic impulse to public urban participation. 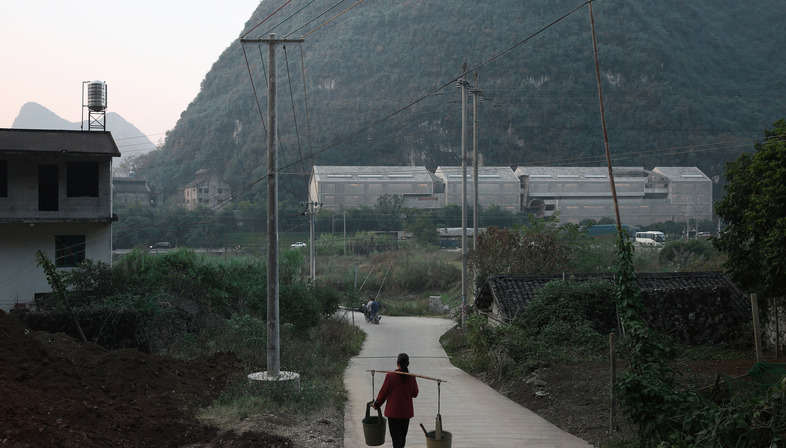 Another extremely interesting, impressive project is Alila Yangshou Hotel, a converted 1960s sugar mill. The complex, a cluster of several scattered bodies, was built in the picturesque mountainous region of Guangxi, encapsulated in between conic limestone karst peaks and facing a wide bend of the sinuous, meandering course of the Li River. The scenic lyricism of the enticing location evokes us traditional Chinese landscape paintings and seems to suit perfectly the new role of tranquil, romantic escape, envisioned by the adaptive reuse. Vector Architects, attuned to the silent notes and cords of the context, weave with elegance and grace a modern thread, that shapes a new rhapsody to the otherwise forgotten place. Simple and refined their imprint conforms to the existing, seeking an aesthetic resonance. ‘Tian’, a term that in Chinese goes far beyond the simple meaning of ‘Nature’, plays a fundamental, equal role in forging this sincere, powerful homage to an industrial heritage and to what it meant for the older generation. In deference of the local morphology has been preserved intact the pristine dialogic interaction between man made and nature, horizontality of architecture and verticality of the mountains, and a series of pathways has been attentively organized as cave-carved, observation points, reproducing those inside the mountains, to allow the guests to wander and admire with visual fluidity and from different perspectives the breathtaking scenario. Reflecting water bodies, according to a geometric patterned layout, complement the ensemble, bordering walkways and units, highlighting the serenity of the environment. A high, large iron truss, used for loading sugar canes, clamps an elongated swimming pool that extrudes out onto the riverbank. Layers of old and new accost each other and merge creating a fresh story, highly expressive of memories. 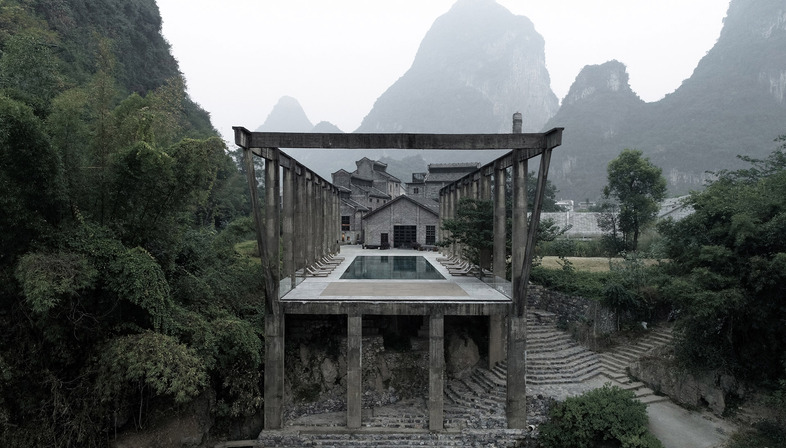 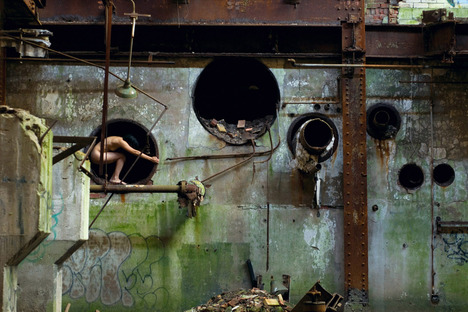 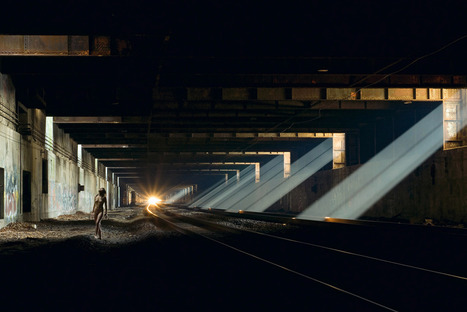 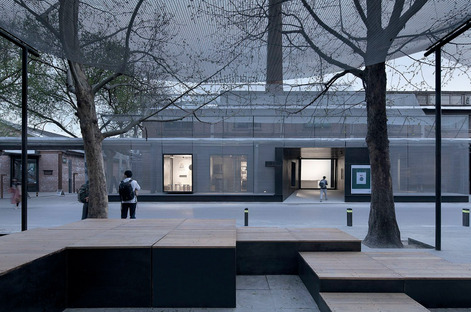 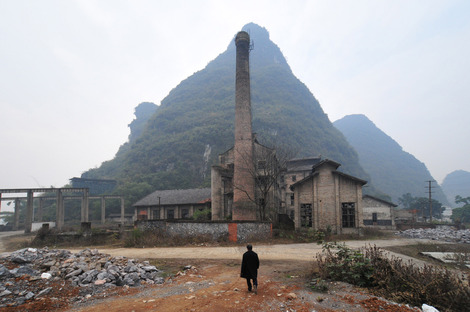 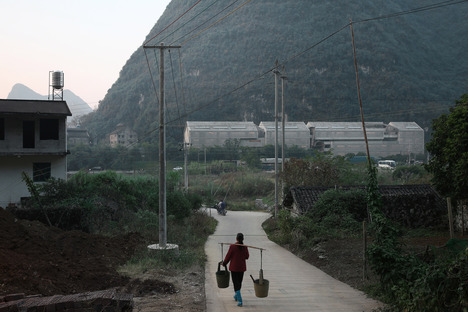 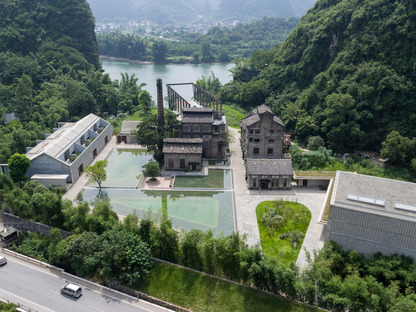 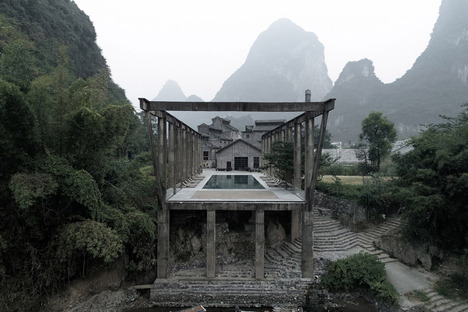 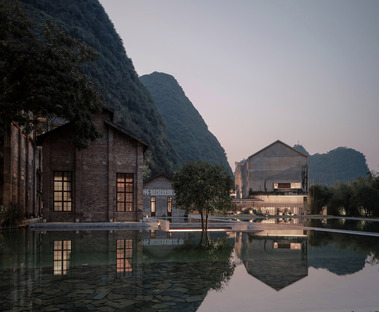 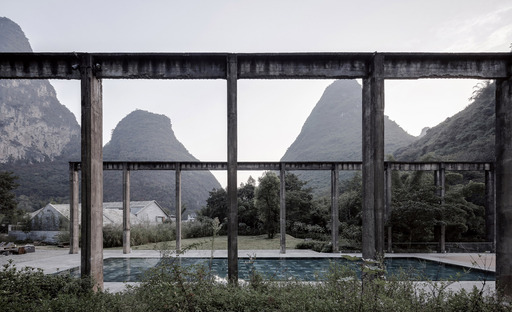 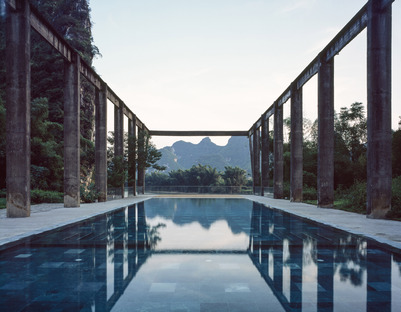 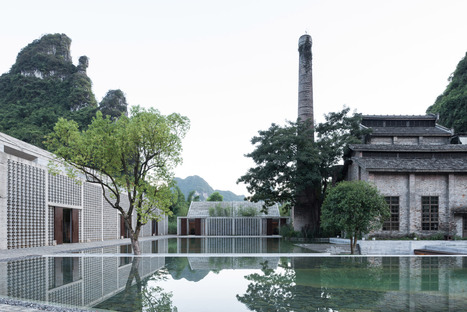 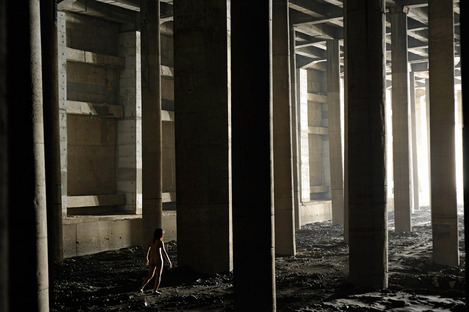 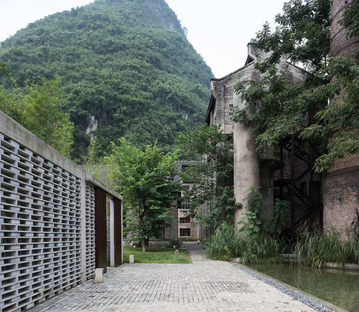 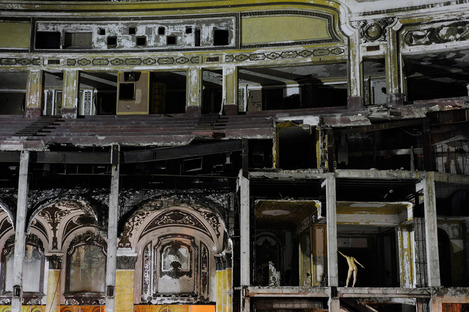 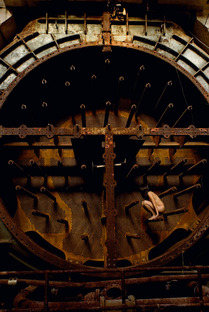 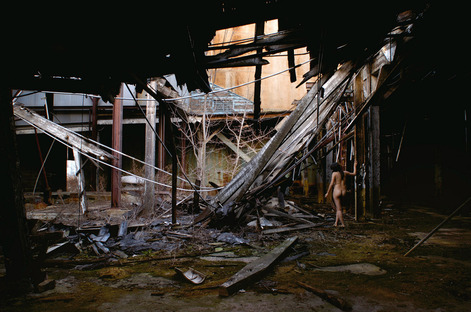 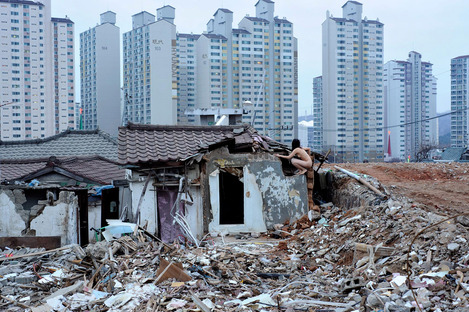 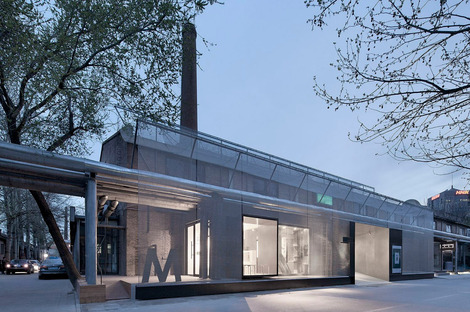 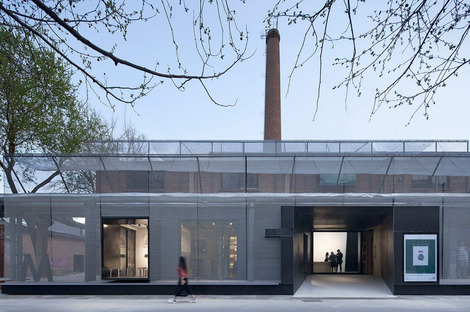