The former Préfecture de Paris, the building that housed the city administration for years, has undergone a major renovation completed by David Chipperfield Architects Berlin. Originally completed around 1960 by architect Albert Laprade, the large scale of the building made it appear closed off and inaccessible. The project conceived by David Chipperfield Architects Berlin, instead, revitalised and transformed the complex into the new "Morland Mixité Capitale" as part of the "Réinventer Paris" programme. 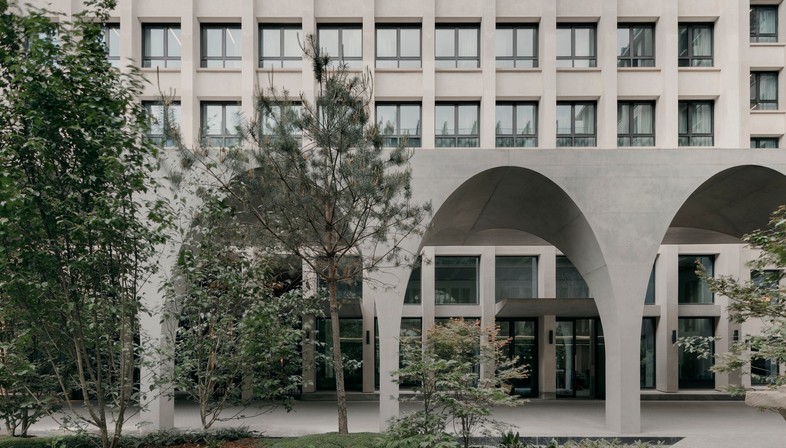 The new "Morland Mixité Capitale" designed by David Chipperfield Architects Berlin is part of the ongoing portfolio of projects for the "Réinventer Paris" programme. A call for new proposals for the French capital, which has resulted in 23 new projects created by multidisciplinary architecture, landscape architecture and art studios.

The project conceived by David Chipperfield Architects Berlin involves the Boulevard Morland complex, better known as the former Préfecture de Paris, as it is the building that for years housed the city administration. The original construction, consisting of a 16-storey tower flanked by two 9-storey side wings, was completed around 1960 by architect Albert Laprade. A building characterised by a rigorous and repetitive façade which, due to its large scale, appeared closed off and inaccessible, lacking any form of life and urban vitality around it. One of the key concepts of the project created by David Chipperfield Architects Berlin was precisely to reverse this trend and make the building accessible to the public by transforming it into an open and dynamic campus. The aim, in fact, is to positively revitalise the entire neighbourhood thanks to the extremely diversified programme of the new "Morland Mixité Capitale", which includes: upscale housing for sale, affordable housing, a hotel, a youth hostel, offices, shops, a gallery, an indoor market, a swimming pool and a childcare facility.
To implement the programme, while ensuring great respect for the pre-existing building and its urban role, as well as according to the principles of sustainability, where possible, the architects opted for repair work on the existing building, rather than replacement. To mediate the relationship between the grand scale of the old complex and the surrounding buildings, two new buildings were constructed facing Boulevard Morland and the Seine river. The two new volumes have been raised above street level, as they are supported by a system of arches and vaults. The solution adopted does not interrupt the routes and views from Boulevard Morland to the quays of the Seine, as well as creating an airy and open system which, by inviting passersby to enter, contrasts with the strict order and introspection of the original building. In addition to the functions for which it was designed, the revitalised complex also offers new vantage points over the city and the river. The top two floors of the tower have, in fact, been reopened to the public, where, thanks to a site-specific installation designed by artists Ólafur Elíasson and Sebastian Behmann from the Studio Other Spaces Berlin, the public can enjoy new and unusual views of Paris and the Seine. 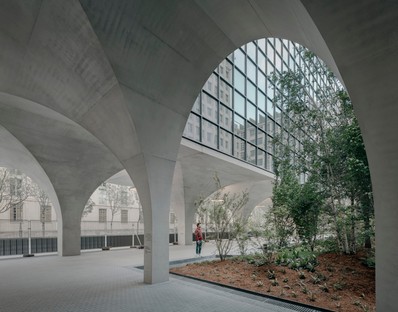 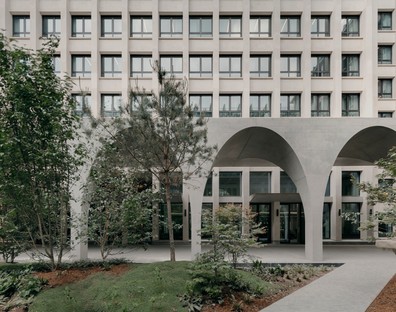 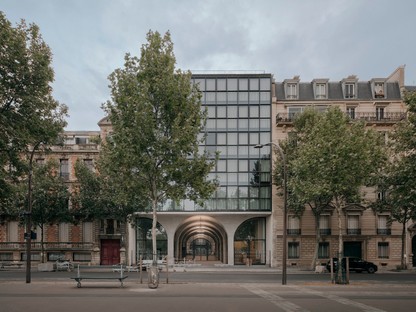 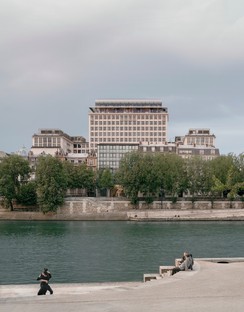 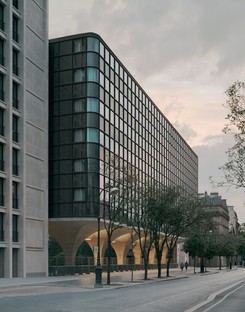 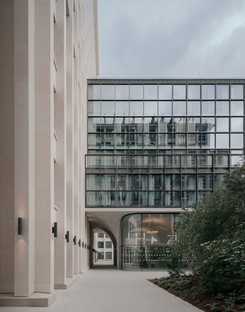 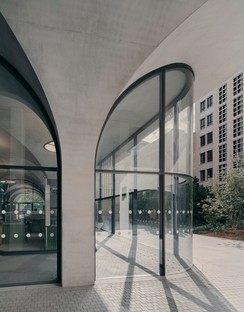 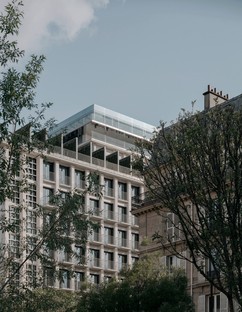 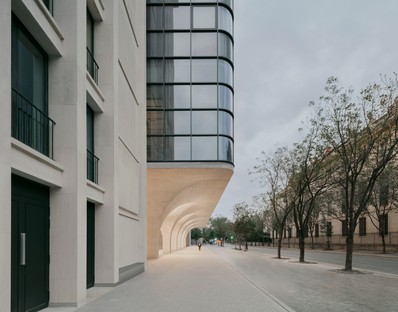 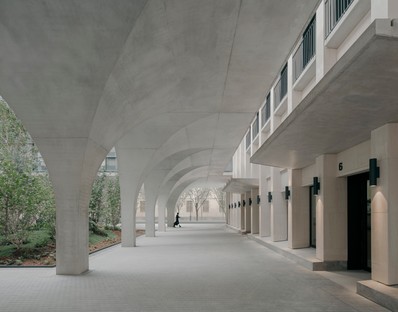 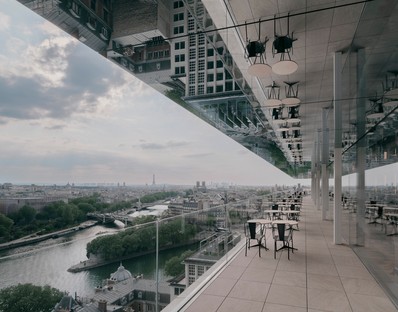 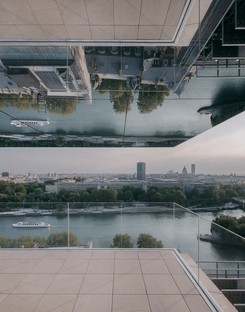 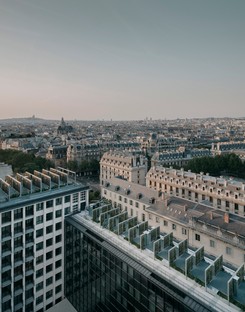 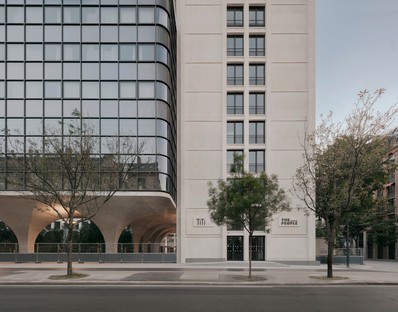 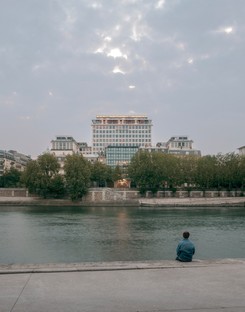 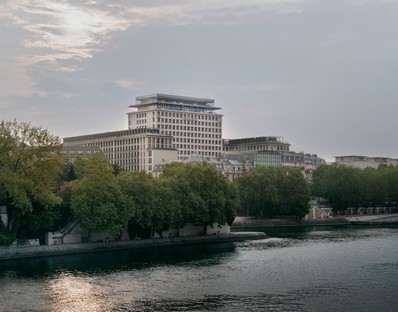 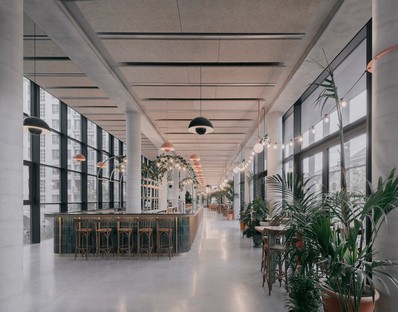 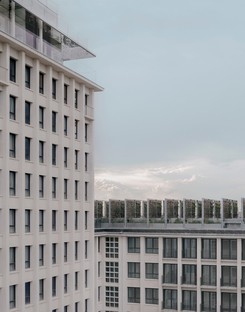