The Architectural Design and Research Institute of HIT Co., Ltd.,

Zhengzhou Grand Theatre by The Architectural Design and Research Institute of HIT Co., Ltd. is an emblematic building clearly referencing the traditions of the Chinese city, recalling a boat on the Yellow River. The cultural centre has seats for almost 4 thousand spectators in a number of halls for the performing arts. 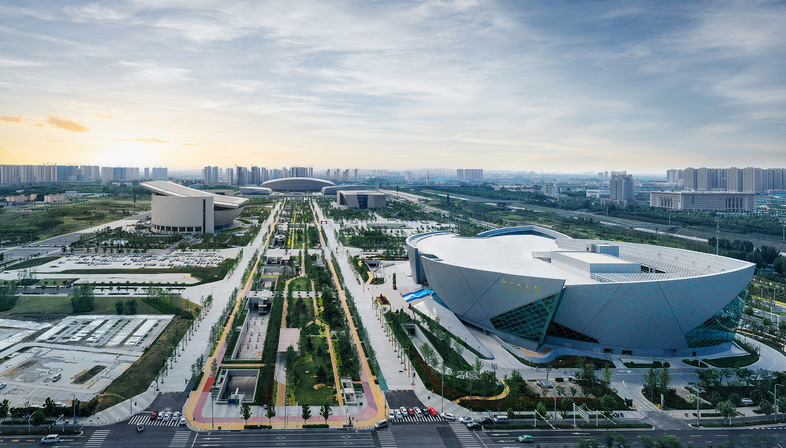 Zhengzhou is a Chinese metropolis with a population of more than 12 million, capital city of Henan province. Known for its Shaolin Temple, a UNESCO World Heritage Site and birthplace of Shaolin kung fu, Zhengzhou is also an important high-speed railway hub. The city now has a new cultural attraction, the Zhengzhou Grand Theatre, opened just over a year ago. In the twenty-first century, Chinese cities often use cultural megastructures to give new neighbourhoods an identity and reflect their aspirations; as a technologically complex building with a major visual impact, a grand theatre is always an important attraction forming the centre of a new district, as in Zhengzhou.
Located in the centre of Zhengzhou’s Public Cultural Service Area, Zhengzhou Grand Theatre stands on a lot measuring 50,900 square metres and was designed by The Architectural Design and Research Institute of HIT Co., Ltd. Measuring a total of 127,739.67 square metres, it includes a theatre hall (1,687 seats), a concert hall (884 seats), a multifunctional hall (421 seats), an opera rehearsal hall (461 seats) and other ancillary spaces.
According to the architects, the project is inspired by the image of “a boat of art sailing on the Yellow River" , conveying the significant culture and civilisation of China’s Central Plain. The ship concept characterises the formal choices, which are also a result of the functional complexity of the construction, in which four independent main halls must coexist, a fact which determines the arrangement of the halls and circulation routes for both people and logistics. This vicinity of diverse functions set high standards for the acoustics, to ensure quality sound effects and avoid mutual acoustic interference. The long-span building, with a length of 204 metres, also posed a major structural challenge, as did the complexity of fire protection for a complex on this scale, with special requirements for the fire compartments, width of evacuation routes, number of emergency exits and evacuation distance.
The architects led by Mei Hongyuan explain that the desire for simplification was at the core of the design process, leading to a unique combination of innovative materials and technologies with references to the site’s historic and architectural past. The façade is the result of parametric design, covered with panels which, as the team explains, “create a curvy form that emulates the irregular flow of the Yellow River featuring nine major curves.” The manual wire drawing process created a multi-layered texture in hues of bronze, another reference to the Xia and Shang dynasties, the Yellow River and elements of local opera.
The permeable façade design ensures that as evening falls, light from inside the complex penetrates the big glass outer wall and the "sails" become a giant curtain. The audience’s activities inside are revealed obscurely, vividly interpreting the artistic character of the Grand Theatre as a performing arts building. The Architectural Design and Research Institute of HIT Co., Ltd.’s Zhengzhou Grand Theatre becomes a new landmark in the urban geography of Zhengzhou. 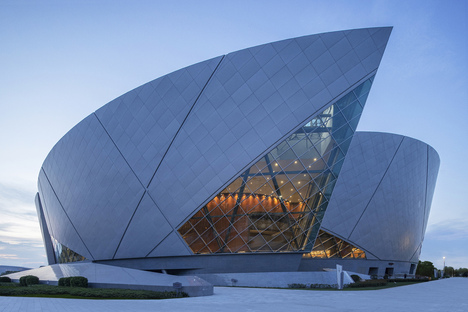 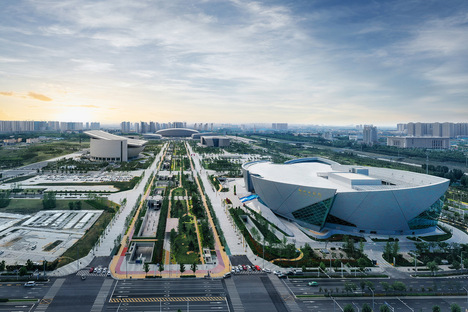 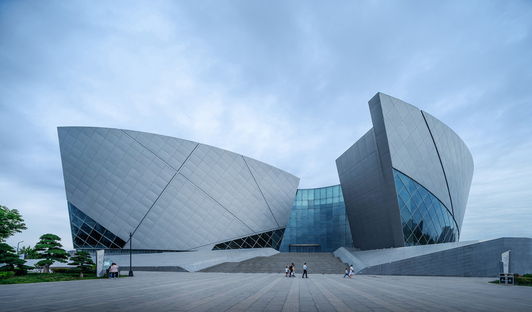 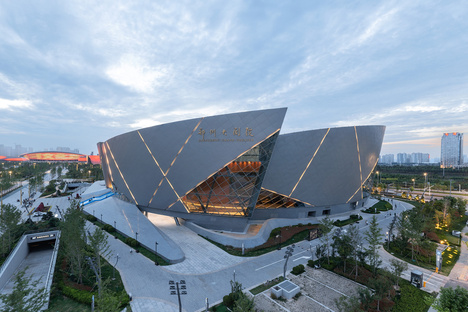 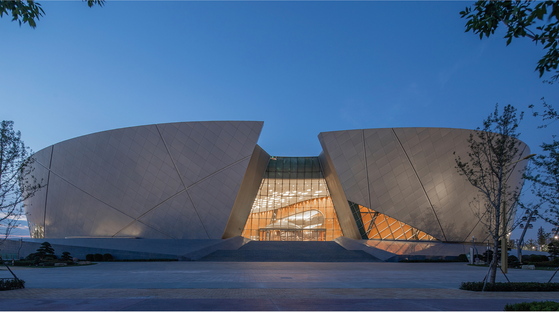 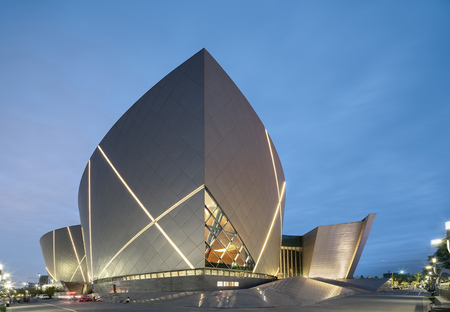 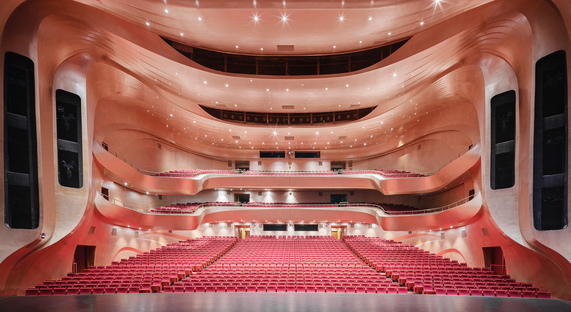 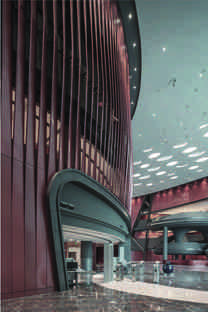 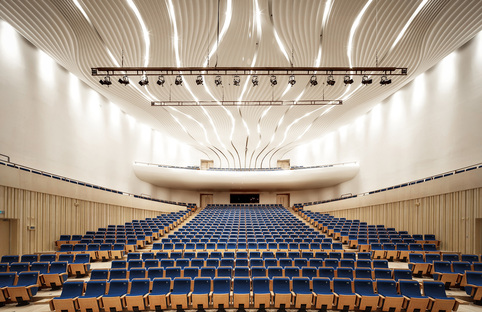 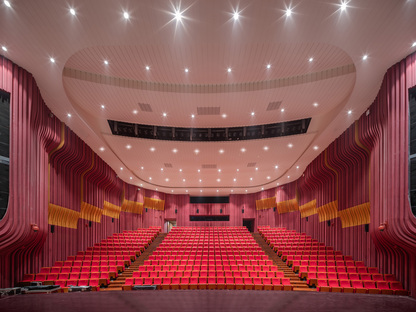 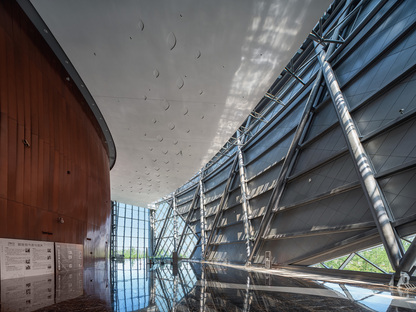 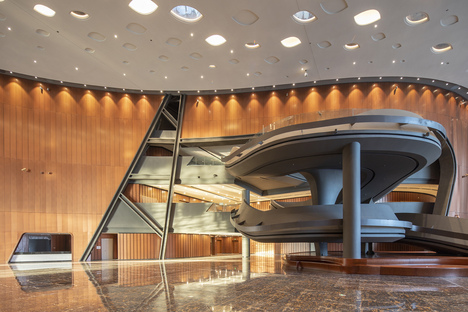 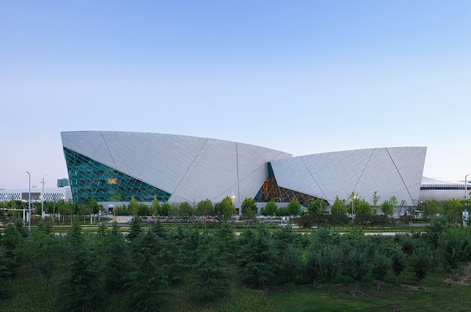 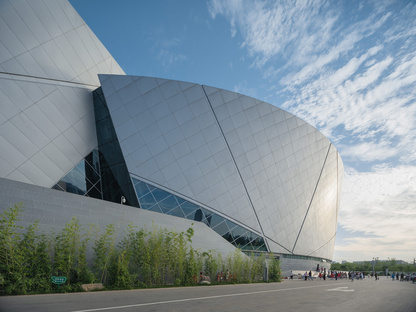