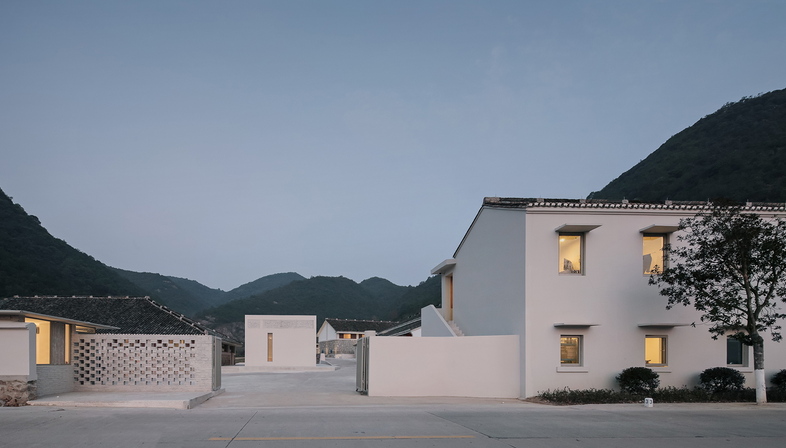 Architecture firm  Ares Partners headed by Helen Wang designed the conversion of six old rural buildings into a stunning resort in Ninghai - not far from Ningbo, in East China's Zhejiang province. A project that brings out the best of the existing architecture and the natural backdrop.


At Floornature we have already showcased quite a few projects involving the conversion of rural structures in China. This trend marks a renewed interest in the countryside, which a new generation of Chinese architects and designers consider important enough to develop. One of these architects is Helen Wang, a founding partner of ARES Partners established in 2007 and the firm behind the LOSTVILLA Huchen Barn Resort in East China's Zhejiang province.
The team of architects took up the challenge of converting an old 1956 rural complex - a granary - and added a supplementary building, all to respond to its new end use. The whole makeover is based on an attentive approach to the stunning nature around the resort. This is really beautiful mountainous territory, lying between Tiantai Mountain and Siming Mountain, just a 3-hour bus trip from Shanghai and 2 hours from Hangzhou.
In converting these farm buildings into hotel accommodation, the architects focused on retaining certain, significant elements. Five of the seven existing buildings were constructed on a sandstone lower foundation with a brick upper. The very small windows were located 2.5 metres above the ground. The architects took a great deal of care to decide which windows to enlarge in height and width, on the basis of the new floor plan of the rooms. They wanted to keep new openings cut into the exterior stone facade to a minimum but they also needed to bring daylight into the interiors.
The original natural stone facades had been painted with thick layers of white paint and were stripped back to expose their original condition. Some of the buildings had a timber framework, which was kept as intact as possible. The false ceiling in two of the seven buildings was removed to leave the original timber trusses exposed. The bathrooms for each of the 21 resort suites were dropped in like boxes nesting in the rooms.
The seventh building from the 1970s had no real historical or architectural value, so it was demolished and its footprint used for the new reception and conference centre. New decks and sunrooms were added to the smallest building on the site. Fantastic spots to soak up the sun but also to enjoy the breathtaking view of the surrounding mountains.
The new reception area is positioned between the two old stone buildings. It makes no attempt to hide in the historical context of the complex, instead, the bold abstraction of the architecture actually underscores its contemporary build. The southern facade of this building faces directly onto the hotel's main entrance, and guests arriving at the resort are greeted with scenic views of the distant mountains. This view is also emphasised in the tearoom on the second floor of the new building, with expansive north-facing windows. The building's eastern facade, on the other hand, responds to the lay of the land by sloping slightly downwards, giving guests a kind of undercover courtyard area. The LOSTVILLA Huchen Barn Resort by Ares Partners is a virtuous exemplar of bringing together the old and the new, architecture and nature, as we can see in Su Shengliang's brilliant photos. 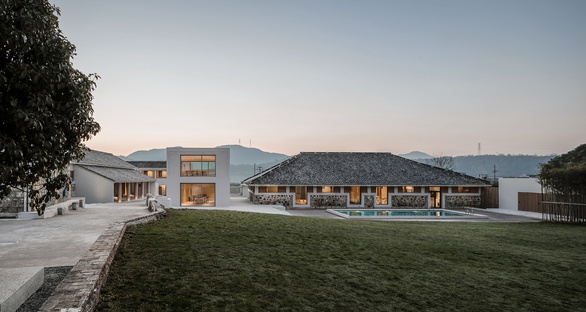 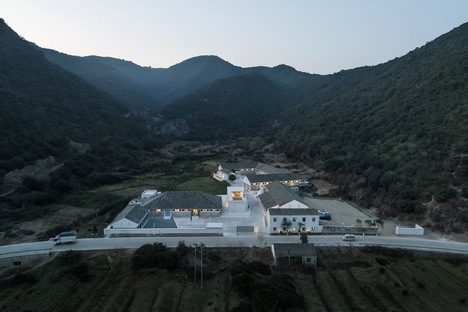 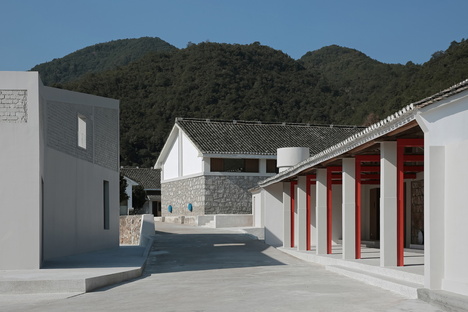 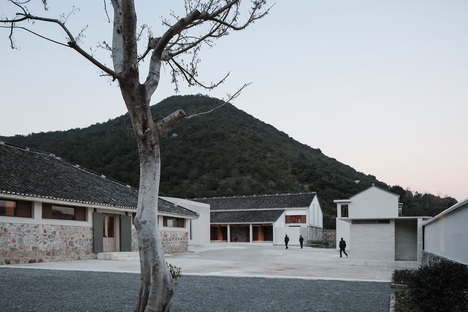 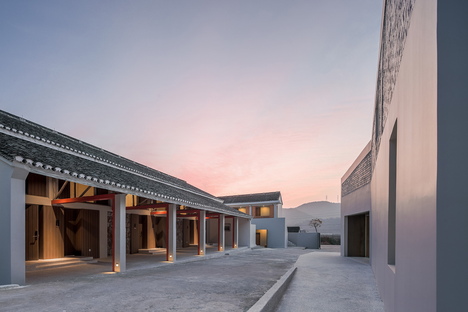 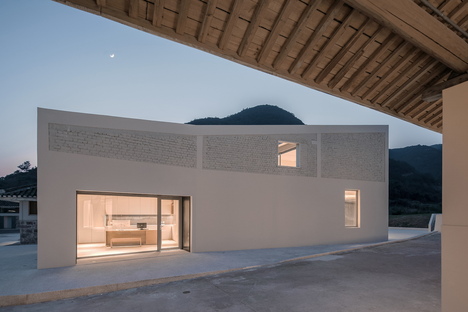 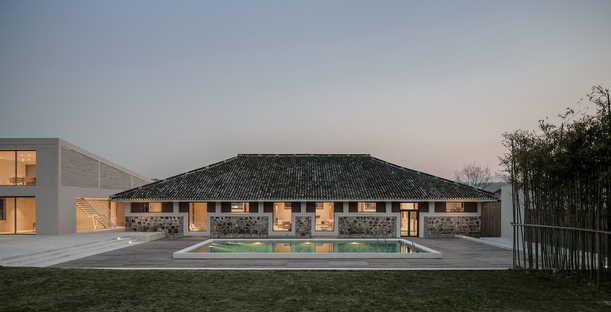 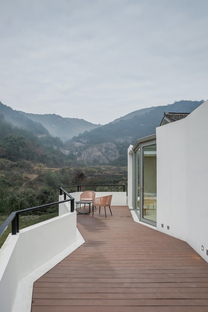 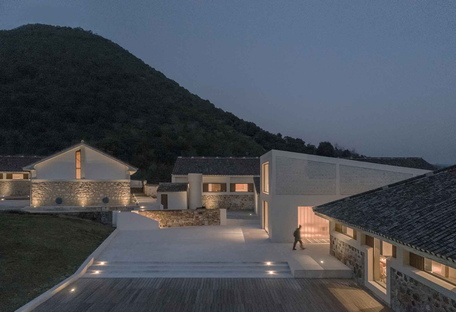 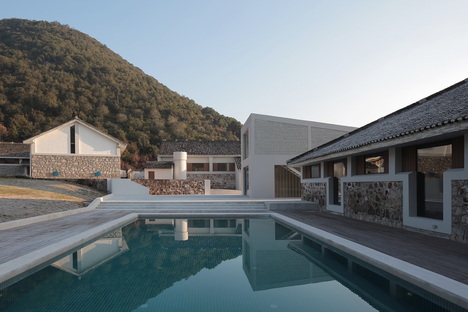 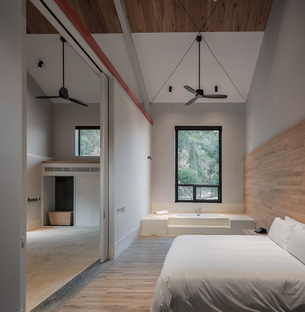 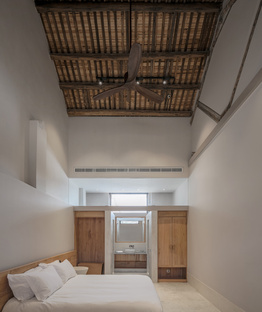 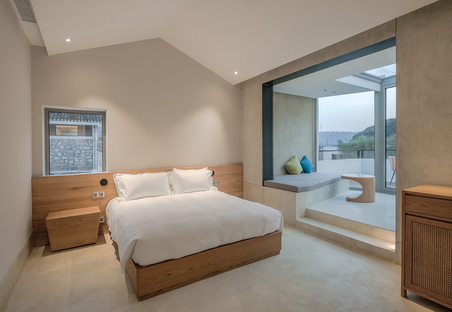 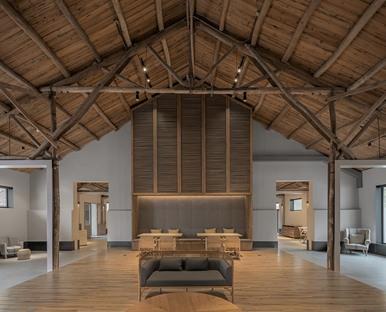 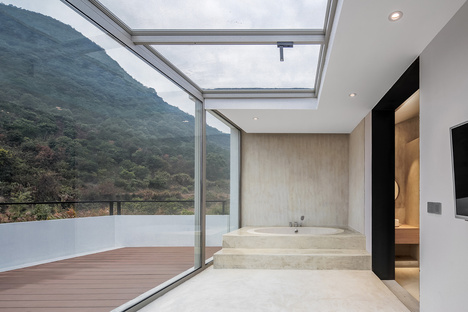