The Żnin sugar factory in Poland is living a second life. Saved from demolition, the industrial complex, with its 27 buildings, has been recovered and transformed into structures with different functions, including a hotel and residences. The project was coordinated for the customer, ARCHE, by the BULAK studio. 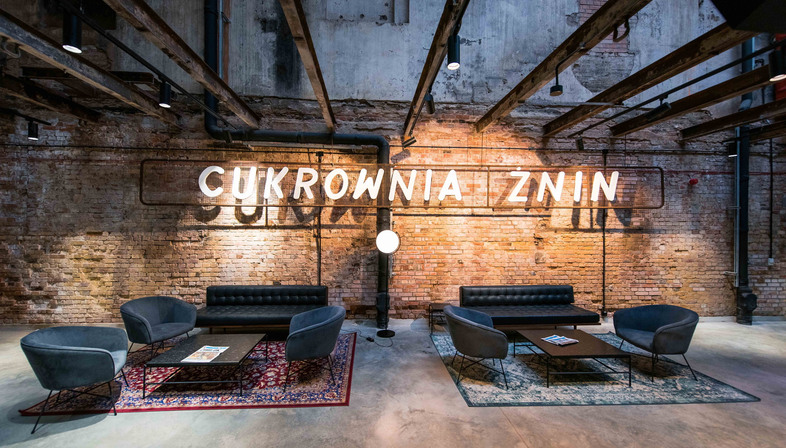 The question of what to do with pre-existing industrial buildings, many of which are obsolete in our current world, yet still fascinating and often also of architectural value translates, more and more, into recovery projects, which make it possible to avoid their demolition, instead preserving and re-adapting the pre-existing buildings.
An example of such an intervention on a macro scale can be found in Żnin in the Pomeranian constituency in Poland. Here, we find a sugar factory built in the late 19th century, which produced sugar from beets until 2004. When the factory was closed down, the buildings that made up the complex were ultimately designated for demolition. Luckily, however, someone saw the potential of the place and its architecture. Władysław Grochowski, founder of the ARCHE interior design studio, later bought the complex with the desire to recover this place full of history. The goal was to revive the buildings which, despite being in ruin still offered great value, respecting their historical fabric, but also the changes made over the years and their aesthetic and technical diversity. All with the involvement of a large group of professionals under the direction of Marek Bulak Piotr Grochowski from the BULAK architecture studio in Warsaw. The process began in 2017 and was completed in 2020.
As the architects explain in a press release, since the very beginning the intervention "focused on preserving the history of the building by retaining almost all elements of the old factory, right down to its screws and sheet scraps." This approach made it possible to maintain the authenticity of the former sugar factory, so much so that upon stepping into the main building, the first impression is that it still serves as a "factory".
Despite the size of the complex, which consists of 27 buildings covering an area of 360,000 square metres, none of the existing structures have been demolished and all have been assigned new functions. Some elements are still to be completed. The signature piece and attraction of the recovered complex is the main building, converted into a 4-star hotel featuring rooms, a restaurant and conference space. The second building is a 3-star hotel, connected to a water park, a spa, a club and a brewery. The third building houses a conference room that can accommodate 800 participants, as well as a cinema, a restaurant with additional space for hosting events, a marina, a rehabilitation centre and an additional, much smaller building whose function is still to be determined.
Interior design plays a fundamental role in the recovery and reintegration of the place in its context. In addition to the conservation of the old industrial architecture with structural improvements, as well as the restoration of the old stone pavement, the recovery of industrial details also extends to the exteriors. Here, trucks, pipes, trusses and other equipment have remained where they were, as direct references to the past. Moreover, the proximity of the complex to the lake that once supplied the water to the factory makes it possible to expand the recreational offer of the site, with ideal conditions for windsurfing and water sports.
The former Żnin sugar factory, in its new guise as a destination for leisure and recreation, has infused the town with a new energy, demonstrating the great strength of old industrial architectures which, many years later, can still give something back to the territory where they were born. 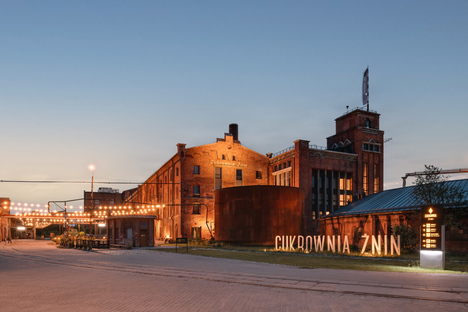 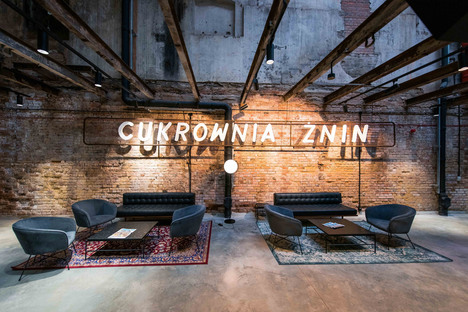 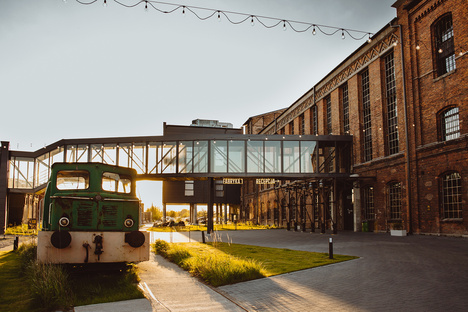 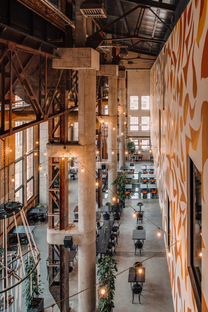 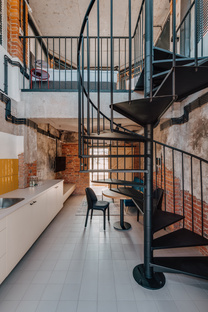 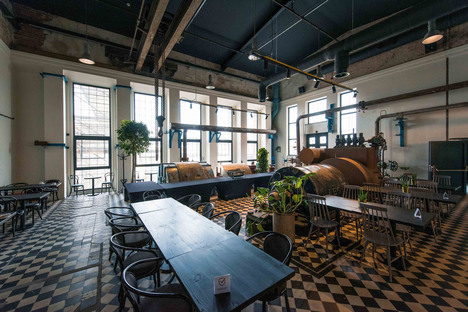 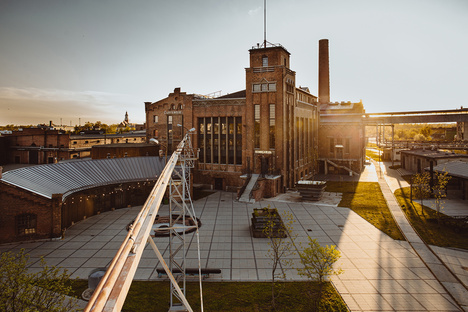 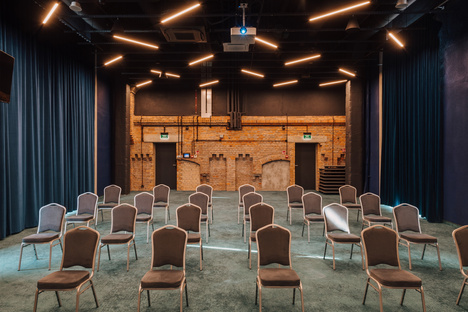 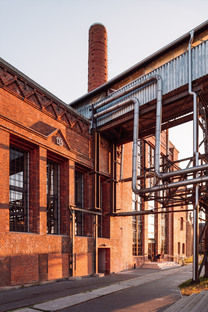 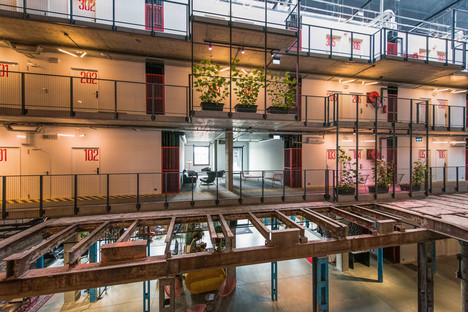 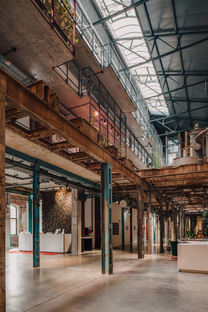 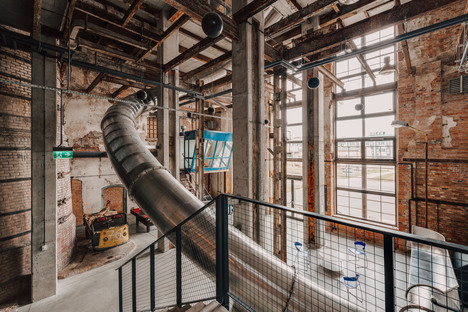 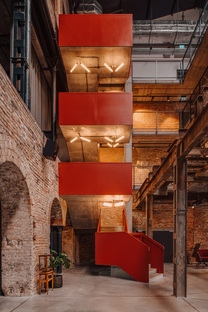 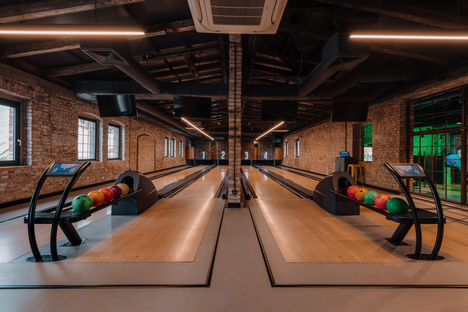 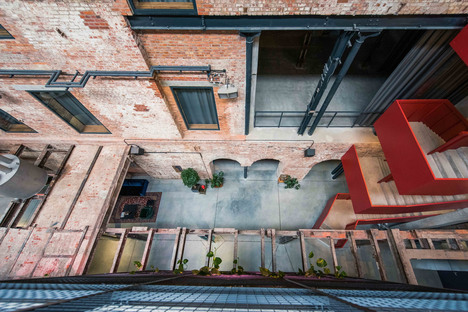 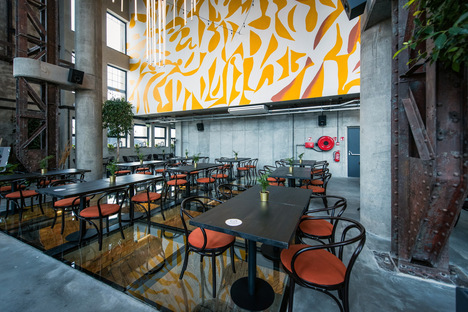