An installation for a night whose beauty remains alive through images and webcreativiy narrating the non-linear story of our time marked by the internet. 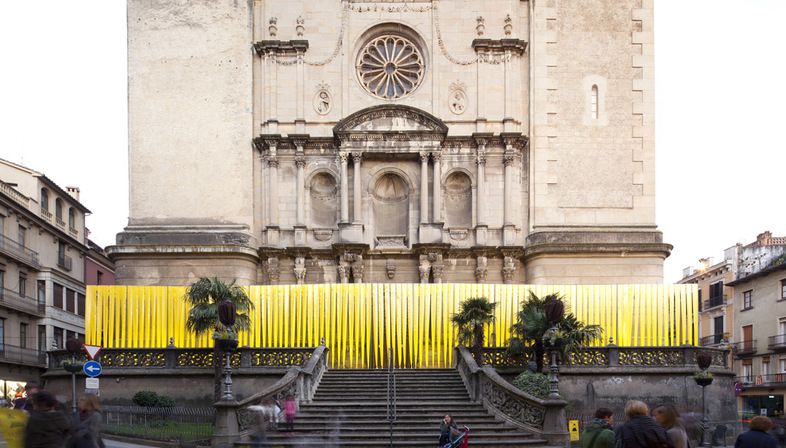 An installation for a night whose beauty remains alive through images and webcreativiy narrating the non-linear story of our time marked by the internet. Here then is the installation by architects Anna & Eugeni Bach for Lluèrnia - Fire and light Festival in the town of Olot, Spain last November. 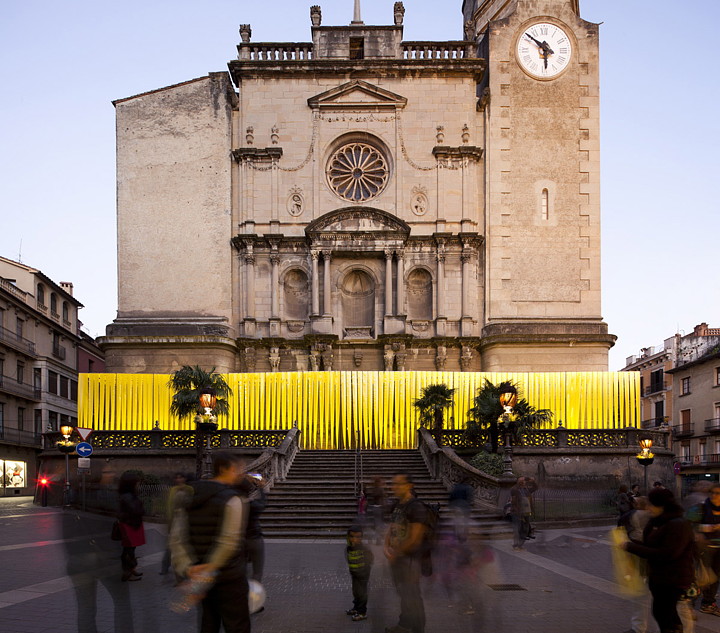 November is the darkest month of the year - just the time to celebrate light in the run-up to the winter equinox. Which is what happens in Spain, where during Lluèrnia, the festival of fire and light on 7 November 2015, more than 50 installations and shows adorned and lit up the Catalan town. 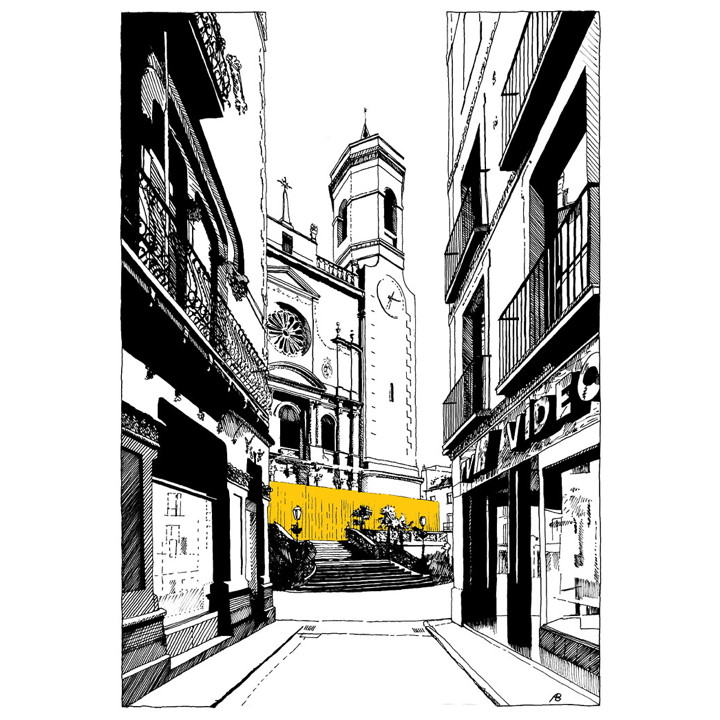 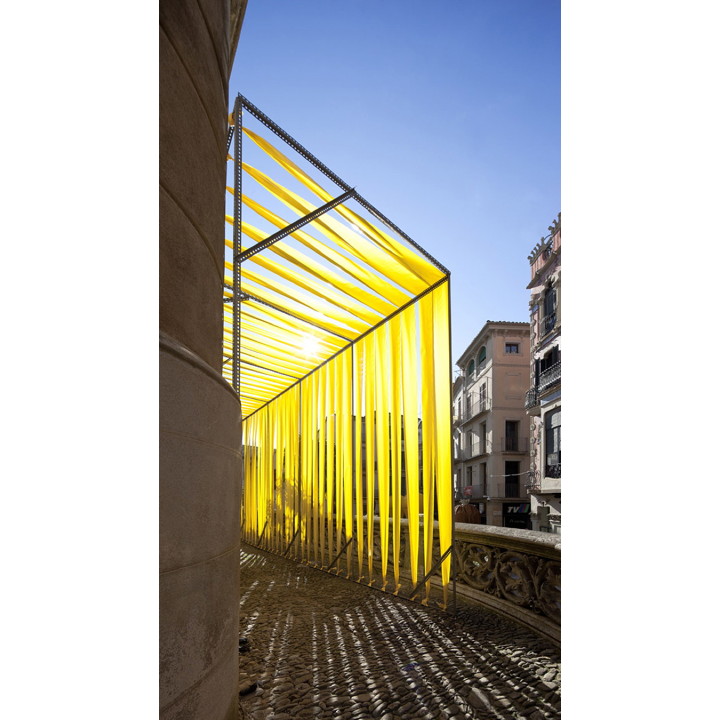 Architects Anna e Eugeni Bach were also there with their installation, a lightweight pergola in Plaza del Rector Ferrer that they designed in order to exploit both the topography of the plaza, dominated by the church and to show how architecture - as fleeting as it may be - can completely change the perception and use of a space. 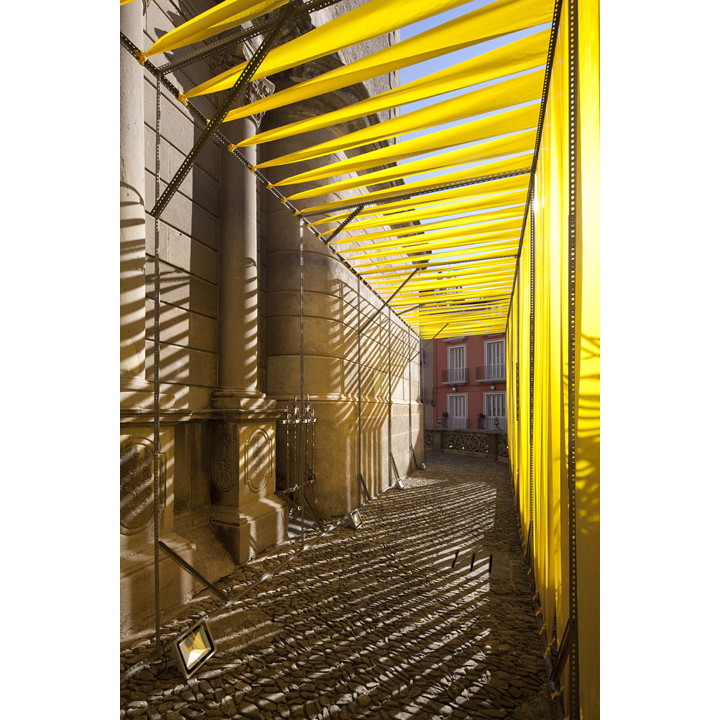 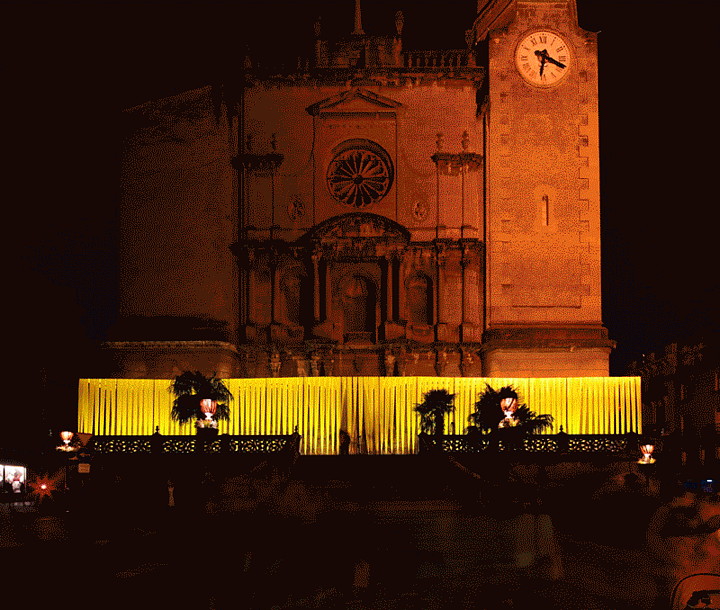 The church is located at the highest end of the plaza, with a podium accessed from a central staircase. An elevated position, almost an urban stage which most people use only to enter the church.
This is the backdrop for the installation by Anna and Eugeni Bach, whose bright yellow strips of cloth marking the boundaries of this ephemeral volume brought the location to life by day. A visual reference that is strengthened at night by the installation's interior lighting. 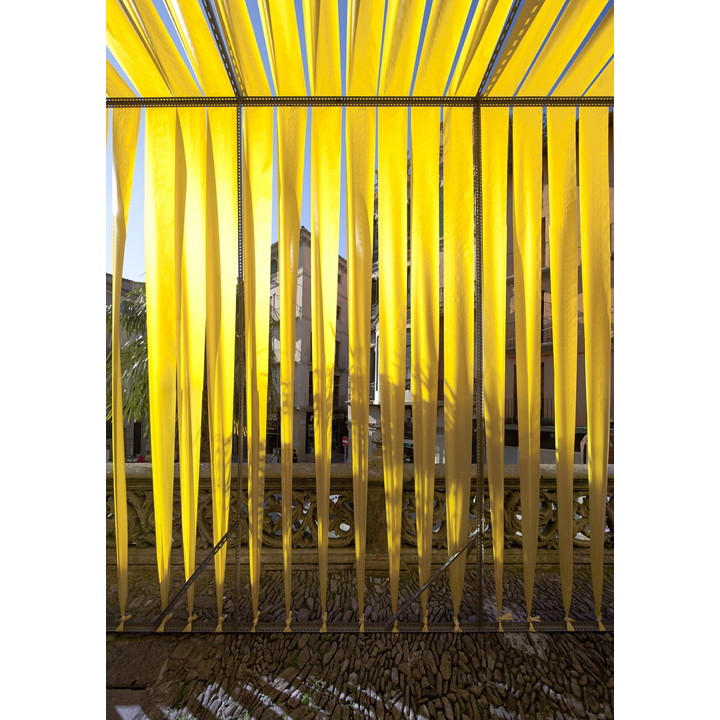 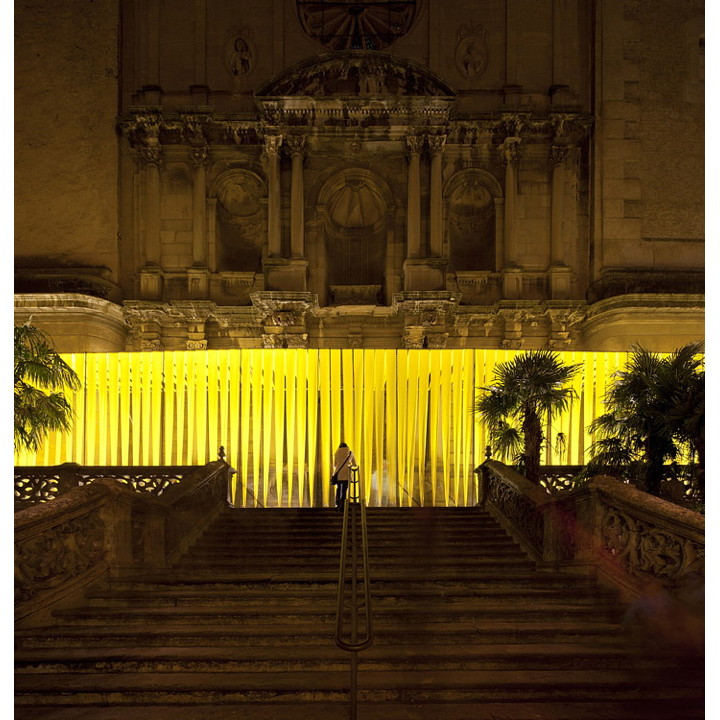 This whets the curiosity of visitors who step inside and in turn become part of the show as they cast their shadows. This engagement with the citizens, generates a lively play that brings to mind shadow puppets and highlights an urban location that is otherwise left to its own devices. 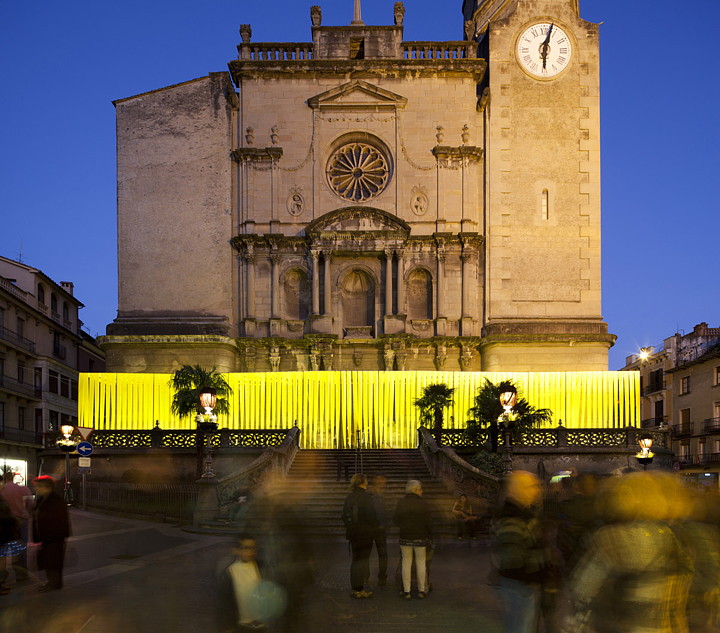 The Lluèrnia festival may last for one night only, but thanks to the images according to the philosophical approach of webcreativity, it is broadcast across the surface of the web to reach out everywhere, so we too can experience the same emotions as the citizens of Olot. 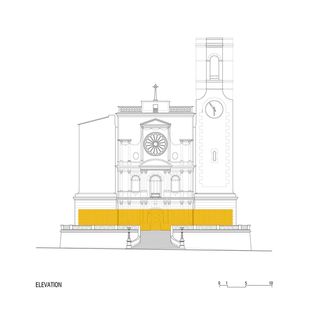 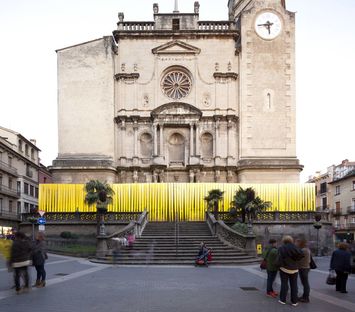 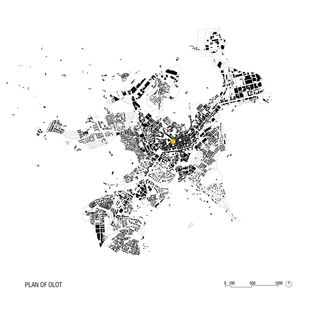 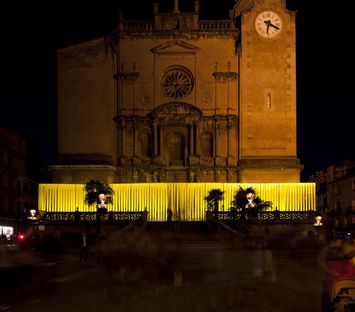 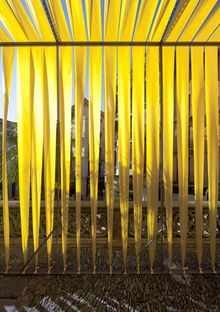 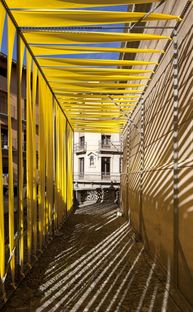 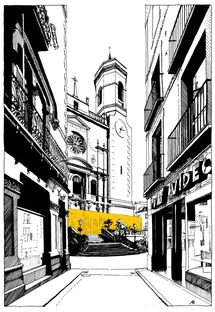 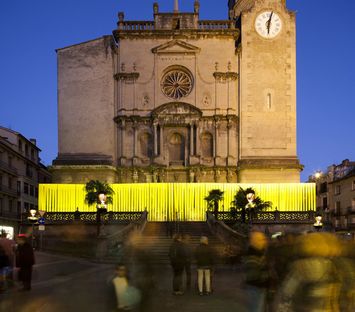 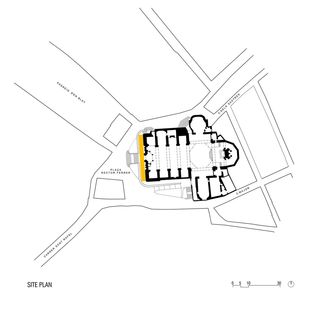 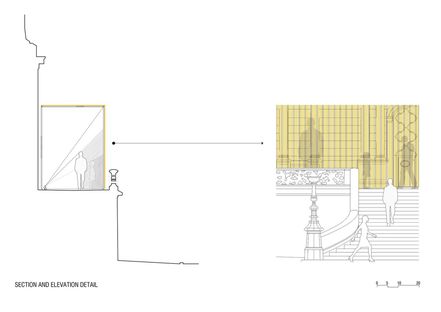 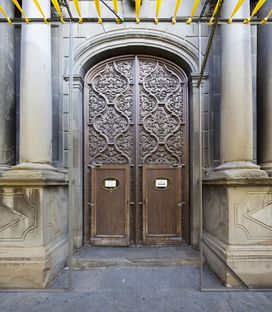 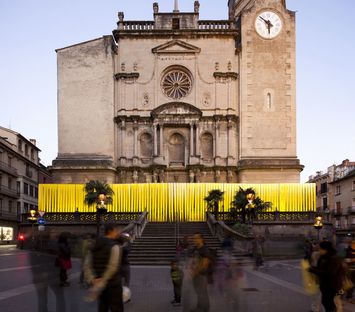 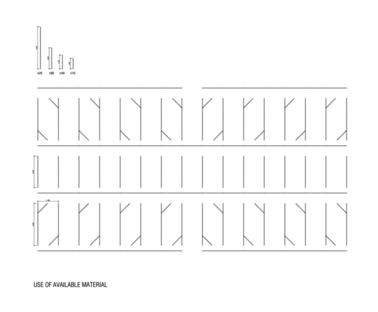 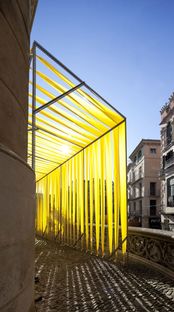 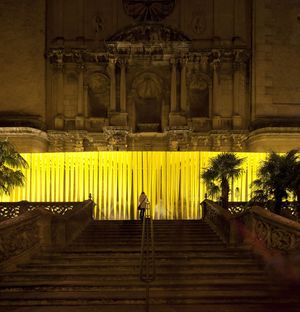 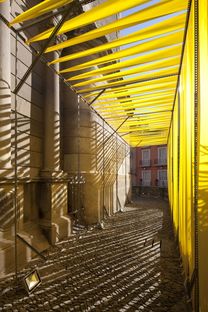