In the past twenty years the authorities of the city of Bilbao have given concrete form to a carefully thought-out plan for their city’s urban development, commissioning architectural projects of international relevance which have made the Basque city one of Spain’s most popular tourist destinations. 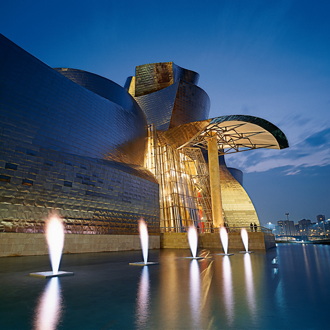 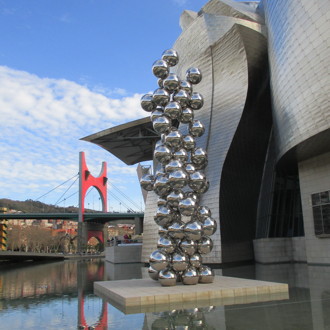 It was bound to be a success story. The quality of its open spaces, an efficient public transportation system featuring an ecological streetcar travelling over a green lawn and twin metro lines connecting the whole city as far as the sea, the conversion of spaces that have lost their original function and re-establishment of the city’s relationship with its river are the keys to the new Bilbao. Over the past twenty years the government of the Basque city has managed to implement a carefully thought-out plan for their city’s urban development, commissioning architectural projects of international relevance which have made the Basque city one of Spain’s most popular tourist destinations.
The best way to tour the city of Bilbao is by public transportation, particularly the metro system with stations designed by architect Norman Foster. The access structures are unusual: big glass and steel pipes emerge from the underground, referred to by the Basque population as “fosteritos” in the architect’s honour. One that stands out from the others is the entrance to Sarriko station, winner of the Brunel Prize for railway design in 1998. Its big glass dome, filling the station with daylight, and long escalator descending from street level into the station make it a truly special place.

Guggenheim Museum_ Frank Gehry
The Guggenheim Museum in Bilbao has undeniably been a success: in the 19 years since it was built, the sculpture created by architect Frank Gehry out of 33 thousand titanium scales has conquered visitors from all over the world, becoming one of the world’s most meaningful and best-known works of architecture. The construction project begun in 1997 had already paid for itself within a year. The Guggenheim Museum is an architectural gem, one of the most spectacular products of what is known as the deconstructivist current in architecture. On the outside, a series of silvery curves covered with titanium, stone and glass sometimes make the building look like a ship, or when seen from another point of view, like a flower.
But the Basque city’s true strong point today lies not so much in the landmark itself, but in the strategic ability of its politicians and urban planners to make what used to be an industrial city suffocated by its steel mills and container port into a city with a new vocation as a touristic and cultural attraction built on a human scale.

Alhondiga_ Philippe Starck
A former warehouse for storage of oils, wines and spirits, a modernist building of bare red brick, iron and concrete built in 1909 by architect Ricardo Bastida which was later abandoned and then converted into a cultural centre and public space by designer Philippe Starck. This unique, original building contains a gym, a swimming pool with a clear floor, a multimedia library, a multiplex cinema, an exhibition and event area, a theatre and a 400 seat auditorium. Philippe Starck created an important meeting-place with 43 columns representing cultural icons from all times and places; the architect designed the columns, which differ in style, form and material, in partnership with Italian set designer Lorenzo Baraldi, seeking out master craftspeople who preserve the skills of working with bronze, steel, marble, glazed terra cotta, brick, wood, cement and pietra leccese, a calcareous stone.
This project reflects a completely different approach to architecture from that of the Guggenheim Museum, giving up the creation of a sensation of wonder to strike an emotional chord in its users in a more discrete way. In contrast with the fascinating, exuberant shapes of the Guggenheim Museum, Philippe Starck offers the city a sober, measured construction, preferring surfaces with a simple, crudely industrial look over the frigid precision of titanium, and using them to make a purely utilitarian building, a container for everyday activities which can evolve over time, a place which, in Philippe Starck’s own words, is “designed for life.”

Spanish architect Santiago Calatrava not only designed the new airport terminal in Bilbao but also designed the famous ldquo;walkway” of Puente Zubizuri, also known as Puente Peatonal del Campo de Volantín, linking Campo de Volantín, which flanks the right side of the Nervión, with Paseo de Uribitarte. Its characteristic harp shape, glass floor, and white colour make the footbridge an important example of contemporary architecture as well as one of the city’s most beautiful sights.

Isozaki Towers_ Arata Isozaki
The Isozaki Atea ("Isozaki Gate") area is on the grounds of the former Bilbao customs warehouse, an institution founded in 1918 as a place of transit for freight in international trade. Japanese architect Arata Isozaki designed a 21st century city gate linking the Ensanche district with the river, consisting of twin towers 83 metres high with 23 floors and five buildings 6 to 8 floors high. There is also a grand staircase recreating Bilbao’s Roman staircase.

Casa Montero
Located in Alameda Recalde, designed by early 20th-century architect Luis Aladren, this house is popularly known as La Casa Gaudí for its characteristic appearance recalling the constructions of Catalonian architect Antonio Gaudì. The only work of modern architecture in the city of Bilbao intended for residential use, featuring unusual cement decorations on the balconies and verandas, the building has been declared a historic and artistic monument.

Artklass Building
The product of a partnership between the architectural studio of Robert Krier and Marc Breitman, the Artklass residential building is located in the area where the new urban spaces of the riverside meet the city, a spot popular with the people of Bilbao, home to Doña Casilda Park. One particular attraction of this building is the gold and green domes at its top. The 45,000 square metre building includes 180 apartments on eight floors and occupies a frontal block extending out in six different directions. Architect and sculptor Robert Krier created 36 sculptures, 31 of which are positioned on the building’s Gothic façade. Krier’s goal was to revive the traditional style of houses in Ensanche without sacrificing modernity.

Torre Iberdrola
Torre Iberdrola is a skyscraper designed by architect Cesar Pelli which has become Bilbao’s new financial and commercial landmark; a work combining architecture with art, design, technology and sustainability. The tower, built as the headquarters of the energy company Iberdrola, is the tallest building in Bilbao. Cesar Pelli stands out for his elegant, sober lines and the way he combines glass with travertine and metal. Torre Iberdrola is the first tower building in Europe to obtain LEED Platinum certification, the highest rating of the US Green Building Council for sustainable design. 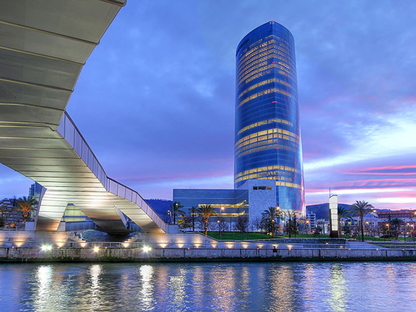 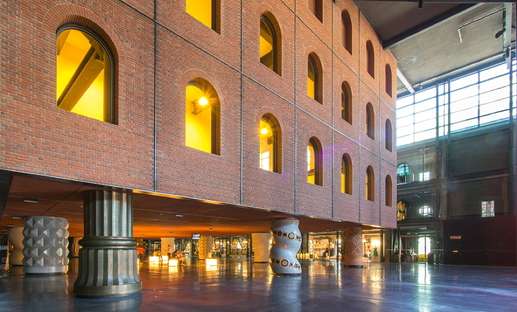 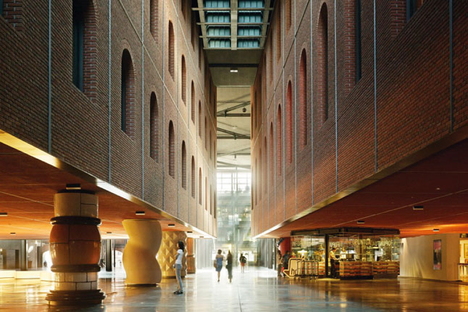 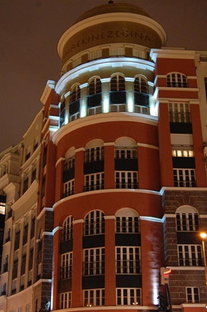 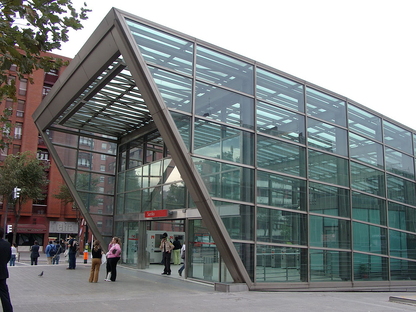 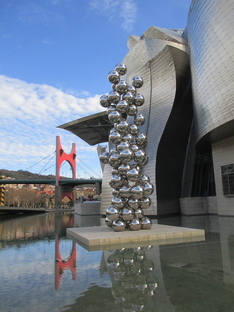 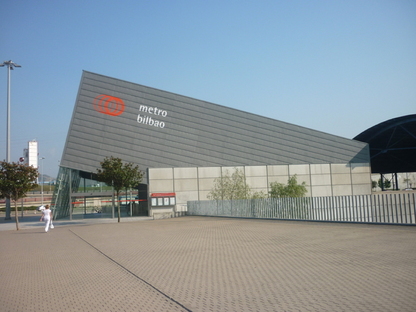 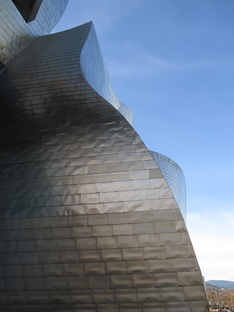 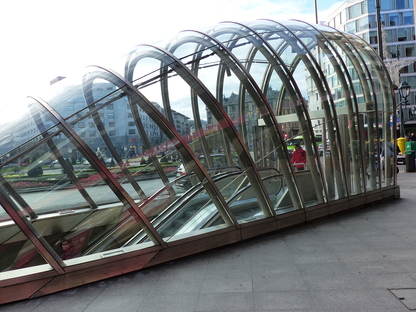 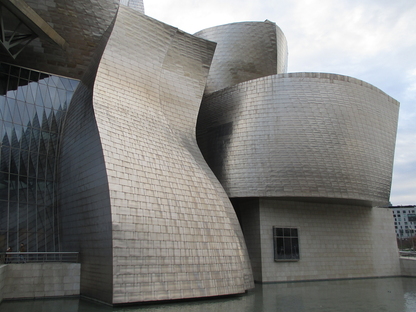 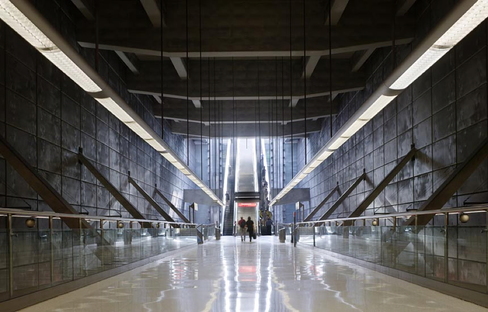 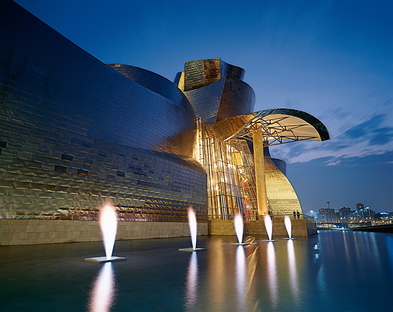 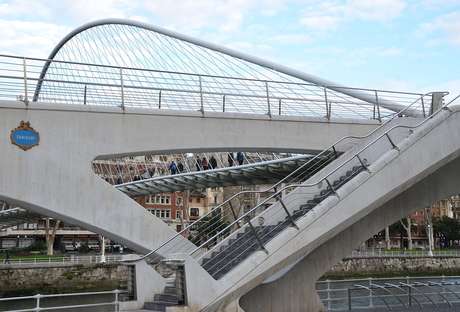 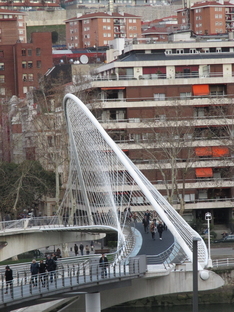 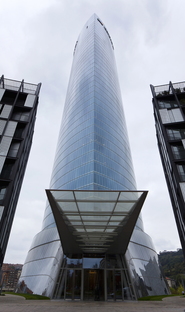 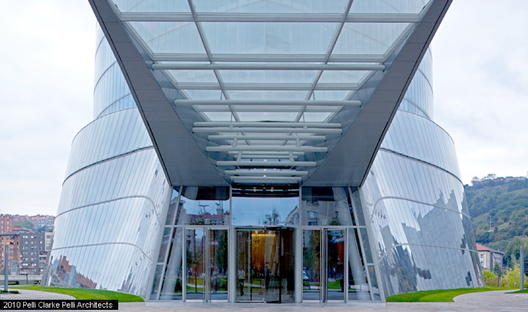 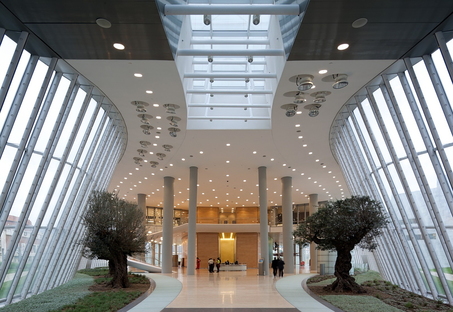 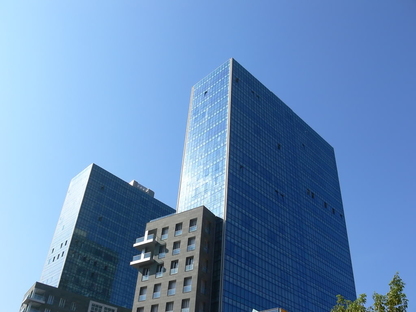